“The L Word: Generation Q” Stumbles Over a Alcoholism Storyline—Again

Showtime recently rebooted The L Word, one of the first prime-time shows to revolve around a cast of queer women and lesbian characters. The show’s initial 2004 to 2009 run tackled myriad issues such as trauma, mental illness, trans identity, and the military’s don’t ask, don’t tell policy. The show admittedly handled many of those issues poorly and it was riddled with a plethora of other issues that looked bad then and haven’t improved with hindsight, including transphobia, biphobia, and lack of inclusion within the cast. The L Word: Generation Q promised to get some of these glaring problems right—or at least take a better approach.

Addiction is one of the issues Generation Q had a chance to dive into with more nuance and care than the original series. After all, LGBTQ folks are at higher risk for struggling with addiction than their straight counterparts, so it makes sense for the show to address substance use among queer people. During the show’s first run, we were introduced to Kit Porter (Pam Grier of 1974’s Foxy Brown), a Black character struggling with her sobriety. Unfortunately, Porter’s storyline wasn’t always handled as well as it could’ve been: She’s one of the show’s only Black women characters, but her very first scene includes her being pulled over by the police for driving while under the influence. Generation Q seemed prime to right this wrong: Early on we’re introduced to Tess Van De Berg (Jamie Clayton), a character who has been sober for two years, and to Sarah Finley (Jacqueline Toboni), a character who uses alcohol to mask the pain of being kicked out of her Catholic family’s home for being gay.

Most of Finley’s friends seem to associate her drinking with being a “party girl,” so she’s only beginning to realize that her drinking is a problem. But the consequences of her drinking have been building throughout the season, bringing her closer to having to face her alcoholism. Peripheral characters notice—and become concerned about—Finley’s drinking because she makes alarming comments such as she’d never had sober sex and she has a pattern of waking up in odd places where she probably shouldn’t have slept.

In this season’s “Labels” episode, everything falls into place for Van De Berg, who attends Alcoholics Anonymous (AA) meetings, to help Finley get her shit together and help the show improve its depictions of alcoholism. Van De Berg is having a hard time after discovering that her girlfriend, Lena (Mercedes Mason), slept with the owner of the bar where they both work, so she calls her sponsor who asks her if she’s helped anyone; she hasn’t, but she notices Finley is passed out as she walks into a backroom at the bar. Finley is also navigating a breakup: During an alcohol-induced blackout, she says some very hurtful things to the woman she’s dating, which pushes the woman to end their relationship. Van De Berg and Finley decide to go out hangover food and during their meal, Van De Berg opens up about her sobriety.

I’d been waiting for a storyline on Generation Q where queers who look like me and live like me navigate the world without booze, even during hard times. But instead, the show takes a different path: Van De Berg relapses and she and Finley begin drinking together. The next morning, Van De Berg is enveloped by shame while Finley is unbothered. Relapsing is a realistic part of addiction (and makes for compelling television, a move true to The L Word’s messy roots), but this particular storyline reinforced stigma about folks struggling with alcoholism. Los Angeles has a thriving community of queer people in recovery, so it’s realistic to show Van De Berg using her own experiences to help someone who hasn’t fully come to grips with their addiction.

Not only could this have been an interesting journey to explore onscreen, but it was also a chance to show queer viewers—some who may be struggling with their own addiction—that it’s possible to survive a hard time without picking up a drink or a drug when shit gets hard. It was more than plausible for Generation Q to show and lean into hope. Generation Q could’ve showed a queer character remaining sober, even when life gets hard, while helping a younger queer person realize that sobriety is possible; instead, we see Van De Berg call her sponsor, attend an AA meeting, and still decide to pick up a drink. Instead, the show chose the more dramatic route at the expense of responsible storytelling. This cheap storyline perpetuates the idea that AA’s program doesn’t work; the program advises people in recovery to “help another alcoholic” when they have the urge to drink, but Van De Berg heeds this advice and still returns to the bottle. There’s plenty to criticize about AA, but having the only sober character relapse while using a well-known recovery method may prevent people who need help from seeking it.

Just once, I’d like to see a queer character onscreen who has struggled with addiction but has done the work to be well.

Generation Q doesn’t stop there though: Fan favorite Bette Porter (Jennifer Beals) is running to be the mayor of Los Angeles after her sister, Kit, dies from a heroin overdose; Kit is initially missing in action, but the show doesn’t actually explain her lack of screen time, drawing out her off-screen death in a mysterious and cryptic way that feels exploitative. It feels cheap to kill off a character who struggled with addiction because it implies that there’s only one outcome for those of us with a history of substance misuse. Even worse, Kit’s relapse is clumsily inserted into Bette’s storyline as an opioid addiction gone too far.

Bette says that a doctor prescribed Kit opioids after a car accident without properly screening for her history of addiction, leading to an addiction to opioids and eventually an addiction to heroin. Attacking pharmaceutical companies and a failed medical system becomes a cornerstone of Bette’s campaign. While it’s true that the current opioid crisis can be blamed, in part, on a web of interdependent systems—legislators, pharmaceutical companies, and healthcare systems—that prioritized profit over people’s well-being, Bette’s framing of the issue risks stigmatizing people who need opioids for chronic pain and other reasons and might makes it harder for them to access care.

There are still two episodes left this season and a second season has been announced, so there is still time for the show to course correct around its handling of addiction. But the show’s promotion of Finley’s storyline doesn’t give me much hope that they’ll get it right this time. The show’s Twitter account has shared gifs of Finley waking up on the couch in the bar as an “lol we’ve all been there” type of situation, which pokes fun at the real addiction Finley is facing. Addiction is a fatal illness, killing tens of thousands of people every year; it’s life and death not a storyline that can be presented with levity for the sake of entertainment. And just once, I’d like to see a queer character onscreen who has struggled with addiction but has done the work to be well. Many of us recover—but you wouldn’t know it from watching TV.

Read this Next: Missing the Mark 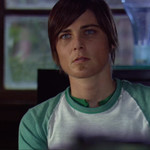 by Mey Rude
We need the most mainstream lesbian show in the world to actively normalize trans lesbians.