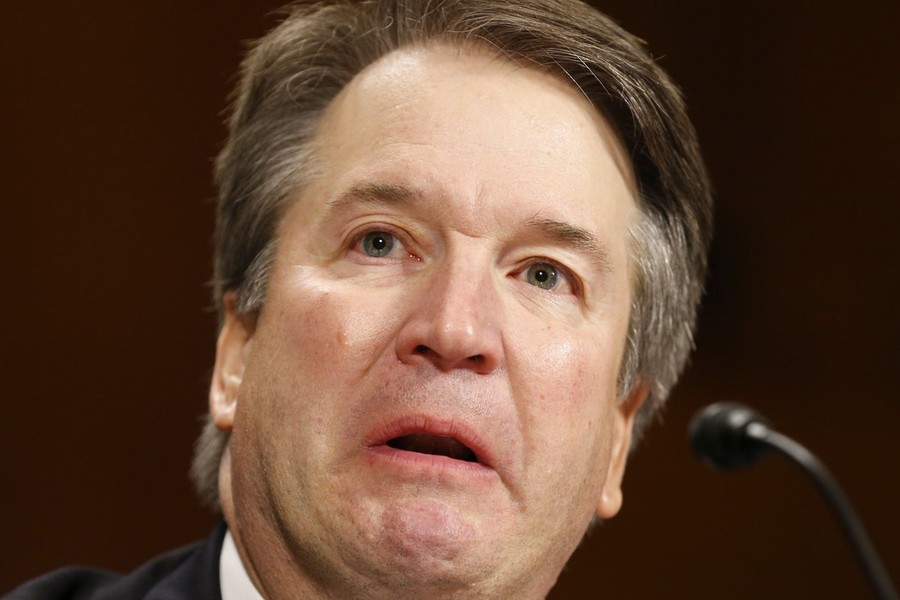 Real men don’t cry, or so goes the mythology about men and their feelings in American society. So it follows that, when men do cry or choke back tears or seem to be slightly moved or upset, something must be seriously, deeply wrong and the world must pay attention. The tears of men are rarely seen in public, so the display of emotion can be perceived as a transgression of gender roles that can be wielded for attention, empathy, and credibility.

This was extremely apparent on September 27, when Judge Brett Kavanaugh choked back tears as he denied Dr. Christine Blasey Ford’s accusations of sexual assault during his Supreme Court nomination hearing. As he blamed the Democrats for inventing false accusations, asserted the irreparable damage done to his family, and gave honorable mentions to women in his life, he went from choking back tears to yelling. His expression of despair is posited as equally—if not more—important than the trauma suffered by Ford, because, as a man, he only shows emotion when he’s overwhelmed by it.

This is not a new reaction for anyone who’s survived abuse. In 2003’s Why Does He Do That?: Inside the Minds of Angry and Controlling Men, intimate-partner violence specialist Lundy Bancroft details how the “sensitive man” trope can be used to manipulate victims into forgiving and feeling compassion for their own abuser. Crying and yelling, performing a “crisis in masculinity” of sorts—where men “struggle” to keep their composure and finally show emotion, which is understood as emotional vulnerability that women crave in a partner—becomes part of the cycle of abuse.

While the emotional socialization of men is indeed different from that of women and places value on stoicism and lack of vulnerability, men expressing emotion can be dangerous for women. It’s not that society doesn’t listen to or care about the feelings of men, but that society codes expressions of emotion (such as crying) as feminine, and thus, these emotions are read as hysterical, aggressive, or trivial in women, but as brave, important, and real in men. Lately, many men have attempted to tackle the issue of vulnerability in men; for example, actors Justin Baldoni and Matt McGorry have publicly discussed men repressing their emotions, and Baldoni even launched an online series called Man Enough.

However well-meaning their intentions are, this push must come with the recognition that men’s feelings are still considered more valuable than women’s. When Bill Cosby was sentenced to three to 10 years in prison for drugging and sexually assaulting Andrea Constand, his publicist said that Cosby and Kavanaugh are unfairly “part of a sex war” being waged in America. Indeed, there is a battle taking place, and it is exposing how abusive men stay in power after they’re caught hurting women. Cosby himself has used his wife, Camille, to confirm his innocence in a 2014 statement in which she asked who the real victim was.

Harvey Weinstein used no other than Lisa Bloom, the daughter of women’s rights lawyer trailblazer Gloria Allred, to vouch that Weinstein is “an old dinosaur learning new ways” while his own statement made promises of “conquer[ing] his demons” and donating $5 million to the University of Southern California for scholarships for women directors. In his apology, issued nine months before he quietly returned to performing, Louis CK mentions his admiration for the women he assaulted without naming them or offering any reparations for his actions. Though these high-profile cases are not exactly the same as Kavanaugh’s, there’s a pattern of powerful abusers using women as shields.

Kavanaugh did this through his choked-up tears, mentioning that his mother’s legal career inspired him, painting a wholesome picture of praying for Ford with his wife and 10-year-old daughter, and submitting a letter signed by 65 of his high-school classmates saying that he’s “honorable.” Kavanaugh even mentioned Ford several times in his testimony, asserting he believes something happened to her—but that the aggressor was somebody else.

Men who subscribe to conservative masculinity, like Brett Kavanaugh does, have caught up on the feminist demand for women to be listened to and included in societal processes, and they are weaponizing it to maintain the status quo.

In Living a Feminist Life (2017), Sara Ahmed argues that when feminism is understood as moralizing, as a force where the only intention is to shame others, it can be easily dismissed.  “[The offending party] can feel bad as a way of doing nothing, and we [engage in feminist critique] because we want something to be done,” she writes. This perception of feminism as moralizing or shaming rather than a call for action and accountability helps powerful men and those complicit in their harm. This notion of moralizing feminism is then used to transform women into bodies for learning or atoning or denying rather than people who are harmed.

Of course, the women who knowingly accept this role are absolutely complicit in the maintenance of the status quo and should be held accountable. But seeing or using women as tools of redemption is not the same as considering them human; this view still defines women through gender difference, as pawns in a game of power. The Kavanaugh hearings exemplified how men weaponize the concept of male vulnerability to maintain power. By emphasizing emotional connections to women, expressing their pain in being accused through tears or confessional apologies, and appealing to the compassion of the nation, abusive men are enacting systemic emotional manipulation that enables them to stay in power.

Ahmed writes that in our culture sexual assaulters “are enabled by being forgiven, as if their vice is our virtue.” We must all collectively refuse to be virtuous, and let the male tears fall without comfort.

The Fragility of Silence

Cooking with Queen Sugar, A Dish to Be Savored

The Violence Behind the Words “Be A Man”