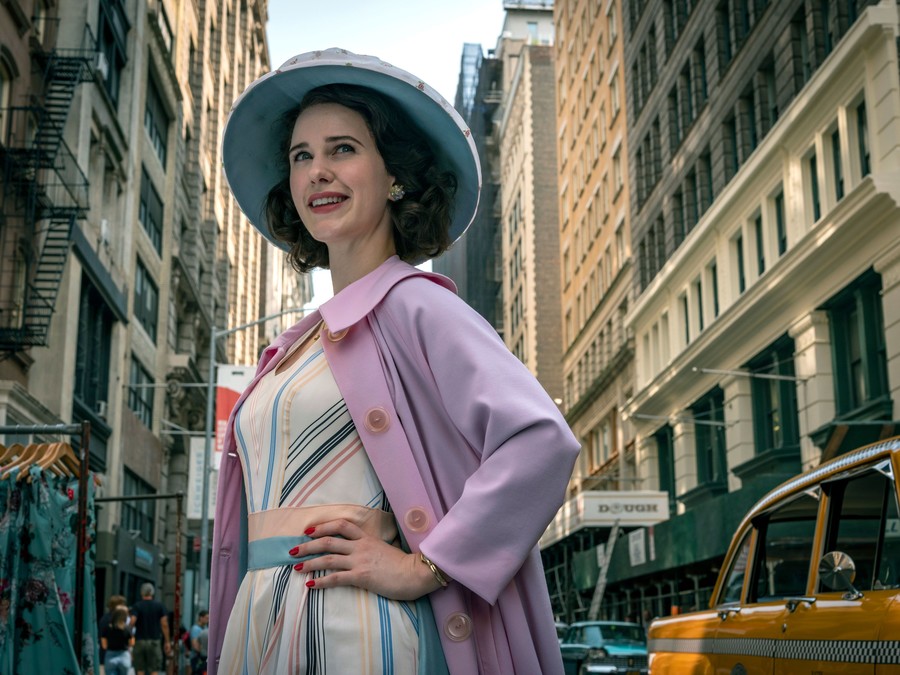 The months leading up to the premiere of the third season of The Marvelous Mrs. Maisel felt like a good, old fashioned TV premiere countdown, the kind once reserved for network TV shows like Grey’s Anatomy, or worse, Vampire Diaries. The first two seasons caused quite the buzz in the world of television, with the show taking home Golden Globes and Emmys for both seasons. I binged them, hard, and joined the already enormous internet fan club. Its energy made it easy to watch, decked out as it was with its extravagant two-piece printed suits from the 1960s and more Jewish colloquialisms than I’d ever heard on TV.

I was hopeful for the third season, in which protagonist and rising comedian Midge Maisel (Rachel Brosnahan) sets sail on her newest adventure: opening for musician Shy Baldwin on his international tour. Season 2 wrapped with Midge deciding she would leave her familiar life behind and instead hit the road, and Season 3 picks up promptly following said adventure. She has one last night with her ex-husband, Joel (Michael Zegen), and tip-toes out quietly before he opens his eyes. Season 3 is Midge out in the world, beyond the insularity of the Upper West Side and the more feared downtown West Village. The once-housewife had just decided to leave her kids, ex-husband, and new fiancé to pursue her career in standup, telling sometimes explicit jokes about sex and gender usually barred from women’s mouths. I wanted to see her flourish. But, unfortunately, much to my disappointment, the creators of Midge let us down, failing to let her grow as a character by questioning her own privilege and whiteness as she travels through 1960s America.

The show brings up various social issues and phenomena of the time, and more specifically of New York City. Still, instead of offering this thoughtful, self-examination, the showrunners bring Midge right up to the edge of an honest reconciliation of her own identity, of actually getting it, and then back away, leaving us with a stunted character stuck in her own ignorant pep. Midge’s comedy makes a point to poke at the constraints of household gender roles and stereotypes of Jewish parents. The wealth of Midge’s parents, Rose (Marin Hinkle) and Abe Weissman (Tony Shalhoub), always felt like it teetered on the edge of ironically funny or harmfully stereotypical, derived from the common antisemitic idea that Jews own all the money and control our political system. Throughout history Jewish people have been scapegoats for financial downturns or a lack of employment opportunities. As such, the stakes in representing a Jewish family with such extravagance and elitism are high, and the danger is severe. Rose, Midge’s mom, is a stereotypically uptight mother, one who’s endlessly concerned with who Midge is marrying (or not marrying) and what she’ll wear to dinner tomorrow night. Her stress is at all times palpable, even to me on the other side of the screen.

Midge’s reckless career choice angers her parents, who badly want her to settle down with her ex-husband, or her ex-fiancé, or really most single Jewish men. But Midge sifts through their disapproving glares and comments, and even gets them to attend a couple shows, her recklessness being both nurtured and costly to her parents, and importantly, reflected in her own father. When Abe, Midge’s father, quits his teaching job at Columbia University and their finances tank, Rose is unable to adapt to their changing income status, whereas Abe embraces a nostalgia for an earlier, more radical and “hippy” time in his life by hosting meetings with a (clearly ironic) slacker “anarchist” student newspaper. Somewhat detached from the reality of his family’s financial situation, Abe seems to believe everything will just be okay while he houses six twentysomething-year-olds on his living room floor. While this could be read as a classic Jewish response—humor in the face of hardship—it is more likely read as an antisemitic stereotype of some entitlement to “Jewish” wealth.

As the showmakers remove the Weissman’s income, they’re offered a chance to replace it with a show of humility, something the family so blatantly lacks. With no rent money, they move in with Joel’s parents, and yet Midge still insists her children attend the expensive private school in Manhattan instead of going to free public school in Queens. Rose (a character I beg the show writers to please finally allow a nuanced personality) returns home to Oklahoma to ask her mostly male family for a bigger part of the family trust. But after she is rejected by their misogynistic exclusivity, she gives up her family money, and returns home to Abe emptyhanded. While we can read this as reckless to the family’s finances, it is also one of the strongest points of integrity we see throughout the show, and also one of the more overtly heartbreaking. But the moment passes, and Rose returns to Manhattan seemingly unchanged.

In an interesting turn of events, Midge becomes friends (and maybe more than friends) with a fictionalized Lenny Bruce (Luke Farrell Kirby), who was an actual famous comedian and activist until his death in 1966. Bruce introduces Midge to a life of uprising and speaking up, and although Midge is intrigued and perhaps a bit inspired, she seemingly doesn’t bite. She goes on tour with Baldwin and his band, a group of Black musicians, and it takes her until the end of the season to even begin to reckon with the implications his race—and moreso, with racism—and somehow never stops to question why the star she was opening for couldn’t stay in the elite Fountaineblue hotel in Miami with her and her other white bandmates. And while Season 1 and 2 could lean on the crutch of budding story development and novelty to hold onto their audience, Season 3 doesn’t earn the same space.

As the show grazed over issues of identity and violence like a skipping stone, I became increasingly frustrated with Midge’s character in particular—will Amy Sherman-Palladino ever evolve Midge into a character who can reckon with these issues? And, does she have an obligation to? After an exhausting season of Midge’s lack of character development, the end of the season brings Midge to what viewers can only hope to be a necessary breaking point for her character. Unsurprisingly for Midge at this point, her breaking point comes at the expense of Shy (Leroy McClain). When he doesn’t show up for rehearsal, Midge goes looking for him; she finds him bleeding on his boat, attempting to recover from a brutal attack by a man he met at a (presumably) gay bar to hook up with, until the man turned violent. She listens, and is kind and attentive, and when he is ready, she covers his wounds and leads him back to the stage, where he sits on a stool for the duration of the show because he cannot dance.

She promises secrecy. Reggie (Sterling K. Brown), Shy’s manager, the only other person who knows Shy is queer, understands Shy’s “stool set” means he was attacked—again. As a queer Black man, Shy has become familiar with this kind of violence, limping onstage for a seated show a few too many time. At the end of the season, they’re in Harlem, and Midge is opening for Shy at the Apollo Theater—a Harlem Renaissance-era music hall known as a staple of Black performance, art, and activism. She’s nervous about her Jewish housewife jokes landing in front of a Black audience, and so, per Reggie’s suggestion, she begins to riff about Shy, as we’ve watched her do so many times. “They want to hear stories about him,” Reggie says. “Stories about the road, late-night craziness, gossip, tantrums — they love that sort of shit.” Instead, Midge jokes about Sky’s femininity, his style, his “Judy Garland shoes” and how “He pretty much has a guy for everything else.” In other words—his queerness. Her self absorption escalates to a level I thought if not impossible, improbable. She betrays his trust for the sake of laughs.

After being fired by Reggie for what could’ve been life threatening for Shy, Midge is left on the tarmac, crying, as the band leaves her behind. Her carelessness (and ignorance) finally catches up to her. But I wonder: What does this mean for her reckoning in the fourth season? Is it finally time for her to take responsibility for her actions, or her lack thereof? Could this be an intentional end to her—and more importantly, the showrunners’—infuriating ability to coast on lightheartedness? Her failure to recognize her position of power, and why she is able to tell the jokes she has without any consequences, is ultimately her demise. How long can you get away with shrugging off the real-world consequences of not fully acknowledging your responsibility to others? The showrunners seem to be avoiding the same question as their lead character.

I wanted to like Midge Maisel. Perhaps this is selfish, because I wanted to enjoy the show: as a Jewish woman from New York City, I wanted to feel like I could trust her to grapple with her Jewishness in a recently post-Holocaust world, her whiteness in the midst of the Civil Rights movement, and her status as a wife as she’s expected to put her (ex-)husband’s life before her own. Alas, as we see in Midge, and unfortunately in so many white women in the United States, she doesn’t. Given the choice, she remains mostly self-involved, unable to reconcile how the world is different for poor Americans, and for Black Americans. When Midge books a radio commercial for a female politician, she doesn’t realize that the candidate, Phyllis Schlafly, is a staunch anti-choice, anti-feminist, anti-LGBTQ conservative who campaigned against the ratification of the proposed Equal Rights Amendment and, before she died in September 2016, wrote a book called The Conservative Case for Trump.

Midge, at the direction of her father, reads up on Schlafly, and after discovering her sexism and not-so-subtle antisemitism—suggesting that Eisenhower was elected by way of “secret kingmakers in New York,” eliciting the antisemitic idea that Jews secretly run politics— walks out on the show, calling her “racist and sexist.” While seemingly noble, it becomes clear that Midge can only label as “racist” the racist experiences that directly affect her, while managing to ignore all others. As I (this time, very patiently) await a fourth season, I am afraid I have already given up on a character whose development is hardly marvelous at all.

Read this Next: Jew Kid on the Block 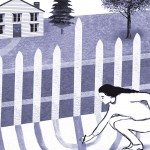 by Kendra DeColo
Aspiration is no longer enough to anchor me. But what will this new identity look like?