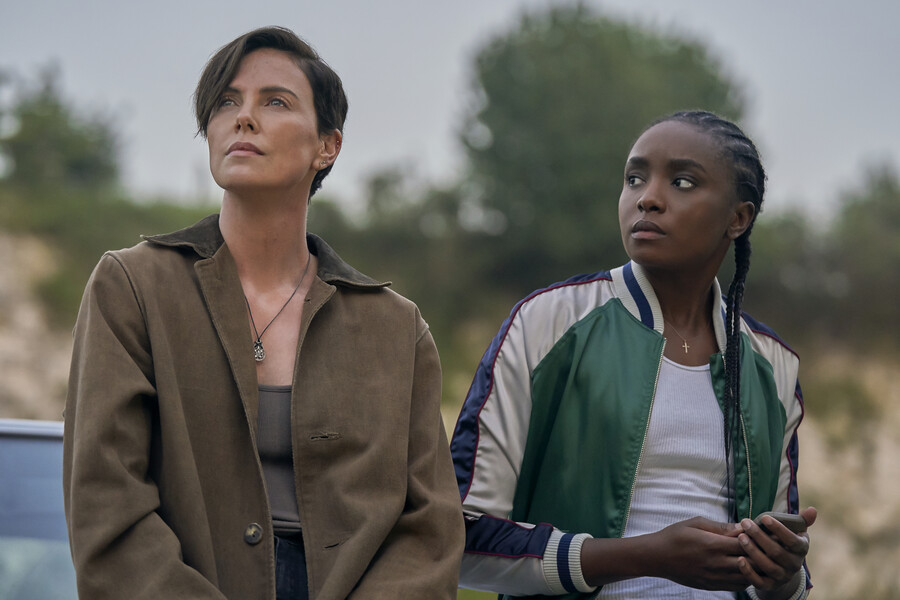 The Old Guard, a new Netflix action drama, is a little terrifying, which might be the reason I spent the first quarter of the film shielding my eyes from the endless gunfire and blood onscreen—there are many scenes featuring the slitting of throats and militarized violence. But it’s not just the blood and literal guts that makes The Old Guard terrifying; it’s also the movie’s sobering message: Some people, many of whom wield great wealth and great power, will attempt to moralize harm, even if it comes at the expense of marginalized people. The Old Guard centers around a group of immortals, most who have been alive for hundreds of years and have spent the majority of those years evading capture, knowing that, if found out, they’d be subject to horrific torture. When they’re duped into revealing their identities, they have to fight to the death to survive.

True action fans who prefer films that show rather than tell will appreciate the film’s decision not to offer a lot of heavy-handed storytelling. The Old Guard doesn’t tell us that its protagonists are immortal; instead, we realize it when Andy (Charlize Theron), Booker (Matthias Schoenaerts), Joe (Marwan Kenzari) and Nicky (Luca Marinelli) are shot to death by a group testing out their supposed powers. The shooters, who are fully militarized, watch the immortals as their bodies bleed out and grow pale as they twitch on the ground before going still. But our heroes don’t remain still for long; their skin pushes out bullets and stitches itself back in one piece. We eventually learn that not all of our superhero team heals—at some point, everything must die—because we see their wounds refuse to heal. Their blood still seeps and their skin remains split.

But The Old Guard isn’t just an action film loaded with blood and guts. It also offers a scathing look at what happens when scientific pursuit blends with capitalist greed. Merrick (Harry Melling) has become very wealthy and very successful from collaborating with scientists and creating cures. He’s saved thousands of people, and made more wealth than he knows what to do with. On stage, Merrick explains the need for what he calls, “everyone’s favorite love-to-hate, big pharma.” “Our work will add years of life to the collective world population. Years, decades. But it’s not cheap,” Merrick says. “We need investing. Investment drives my enthusiasm to take risks. These risks improve countless lives.” Impressed by Merrick’s message, and desperate for cures for degenerative diseases like the one that killed his wife, Copley (Chiwetel Ejifor) offers Merrick the immortals on a silver platter. And so, Copley sets out to find them with the support of many gun-wielding operatives.

While Copley tracks them down, we spend most of our time with the immortals themselves. As outsiders, we’re granted myths and half-forgotten stories about the hundreds of years the immortal crew have spent wandering the planet, and, more often than not, saving the world. Even among the group, Andy is something of a legend. She hardly remembers how long she’s been alive. We listen as Booker, Joe, and Nicky explain her existence to Nile (KiKi Layne), a newcomer who Andy rescued from her life as a marine before the military could imprison and likely experiment on her after they realize that she, somehow, can’t die. The men wax poetic about Andy—“I was worshipped as a god,” she says of herself— while she sits, alone, hearing her own story, including that of her relationship with Quynh (Van Veronica Ngo), a woman she bonded with and was ultimately separated from during the Salem witch trials, as the two were accused of being witches.

In a particularly painful image, we learn that Quynh was locked inside of a metal cage and tossed into the ocean, left to die—and reawaken—over and over again, for time immemorial. While it’s unclear if Andy and Quynh were romantically involved, we’re offered queerness onscreen in the form of Joe and Nicky, who fell in love despite being on opposite sides of the Crusades. In equal parts queer representation, and illustration of the violence of the military and police, Joe and Nicky are mocked while tied up in the back of a van. One man, dressed in military gear, comments, “What is he, your boyfriend?” The other men in the van laugh, the idea absurd: How could these two, all-powerful, immortal men be in love? Would that not make them weak? Joe sets off on a romantic speech, explaining, “This man is more to me than you can dream….I love this man beyond measure and reason. He’s not my boyfriend. He’s all and he’s more.” 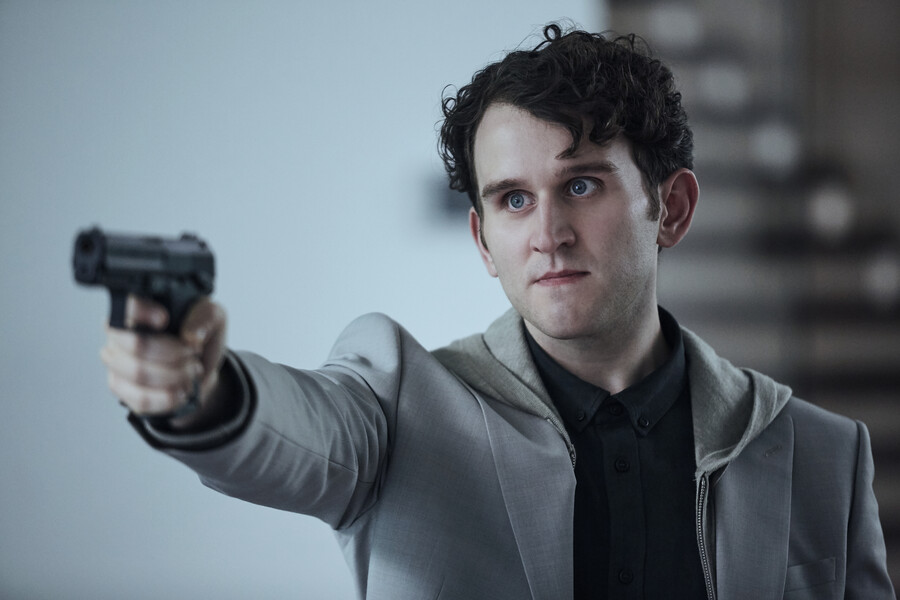 But the scene also smartly targets the ways in which toxic masculinity and violence intertwine, particularly within the military. Nile is pragmatic, talented, and has family awaiting her in Chicago. She’s also a part of a legacy: Her father died while he was in the military. And yet, the moment she steps out of line by—dying and coming back to life—everyone turns on her, including the women she considers to be her closest friends. Much of this is conveyed through glances. Nile works out and attempts to push through her stress and confusion, while the eyes of the women she once considered allies stare her down. She’s told to pack a bag and board a helicopter. She’s alien now, unworthy of trust, until she’s saved by Andy and comes to understand how violence functions. Nile, much like her immortal counterparts, seeks to protect the world as the official forces meant to protect and serve spend their time mocking queer men and protecting those in power.

Copley thinks that working with Merrick will have a positive outcome, primarily because Copley has pure intentions: He wants to help people, and he believes Merrick’s perspective is the way of the future. But Merrick quickly turns on Copley, and it becomes all too clear that Merrick isn’t interested in science. He’s interested in the money and fame he can garner if he creates a cure for death and disease. When Joe and Nicky are captured, Merrick happily and excitedly stabs them himself, wanting to see them bleed, and heal, in front of him. He says, “What do you see?” To which a scientist responds, smilingly, “The Nobel Prize.” Merrick notes, “And a fair few quid to boot.” He continues on in the way that villains do, noting that a cancer drug he brought to the market killed more than 250,000 lab mice and that he doesn’t care if his experiments ultimately kill Joe and Nicky. He doesn’t care who it kills if it makes him successful.

“We’re morally obliged,” Merrick says of their DNA, “to take it.” But what he means is fueled by wealth. When Copley questions him, saying, “This is about science, not profits,” Merrick is clearly disinterested in that line of thinking. Later, Merrick clarifies again his disregard for life, saying he needs to make sure everyone is killed off so that his competitors can’t step in on his research. “As if the CIA never disappeared anyone,” he says. “We don’t stop.” He’s not the origin of scientific research gone wrong. Merrick is just continuing a long history of powerful white men funding violence in the name of wealth. Dozens of guards are murdered in pursuit of protecting Merrick, a horrible man who wants to fund the torture and destruction of other people so that he can become only richer. While The Old Guard seeks to complicate the battle of good versus evil—upon meeting the rest of the team, Nile asks, “Are you the good guys or bad guys?” to which they respond, “We fight for what we think is right”—ultimately, it’s a film that makes clear the absurdity of desperately pursuing immortality. “Everything has to die,” Nicky says. Everything has its time—and nothing, not even money and accolade, can save us from death.

Read this Next: In 2019, “Charlie’s Angels” Isn’t Just about Girl Power—It’s a Critique of Male Leadership 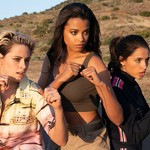 by Rachel Charlene Lewis
In 2019, “Charlie’s Angels” is less about impossibly perfect women saving the world.