“The Bachelorette” Offers a Lesson About Polyamory | Bitch Media

The Pleasure Dome: Why Can’t I Give Up the “Bachelor/Bachelorette” Franchise? 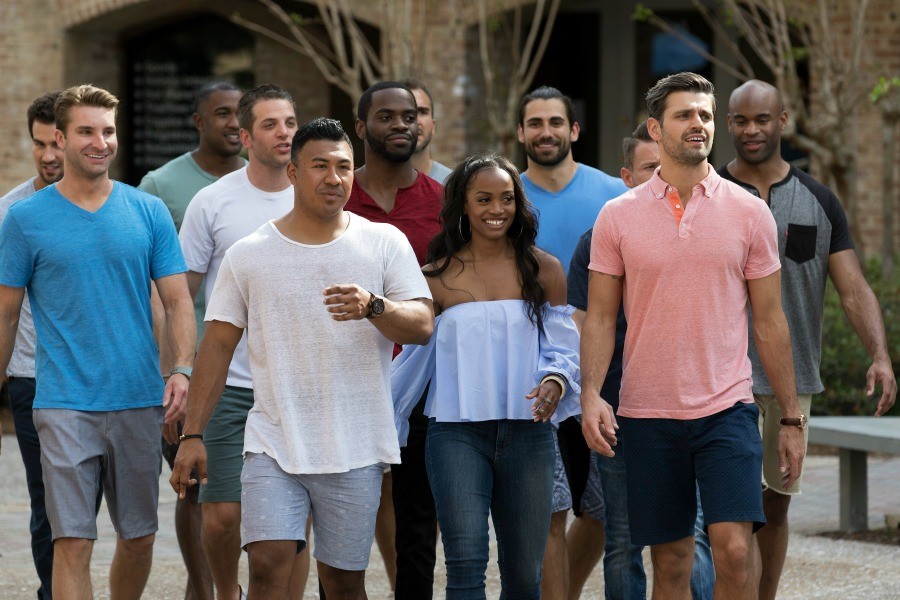 The Bachelorette/Bachelor franchise has pulled off something pretty fascinating: fitting a life’s worth of polyamorous first dates, first kisses, and first sexual experiences into a few weeks. The poly part keeps me watching this mess of circular relationships based on brief underwhelming interactions between shallow people. Usually, one person is polyamorous during the first few weeks of elimination, developing relationships with all the other people (who, so far, are all people of the other gender in a binary spectrum. I’m impatiently waiting for a bi/pansexual contestant).

I think America only tolerates this poly behavior because it is temporary—at the end, the contestant is supposed to get engaged to one person. What we see is polyamory with training wheels. We watch the contestant have conversations where they are either honest about their landscape of relationships, or somewhere on the spectrum of omission to flat out lying. We get to see how he or she develops feelings for multiple people concurrently. Almost every season, we reach the moment of surprise: “I just never thought I could fall in love with (insert number between two and 20) (insert guys or chicks) at the same time!”

At which point I always think, “I know, isn’t it amazing?”

And then monogamy crashes into polytopia like a ram as the choicepoint approaches.

The last week of the competition is always the one that drops my jaw. In rapid succession, the contestant sleeps with his/her finalists in a variety of be-candled fantasy suites, where I always pray the condoms are discreetly tucked away in a drawer. In the last few seasons, the contestants have gotten less demure about what happens in the fantasy suite. They’re shown cuddling in bed in robes or towels, post-coital, awkward, and even, sometimes, without their false eyelashes. They still use euphemistic language like, “last night allowed us to really talk,” but they are at least more overt about being half nude and intimate.

I am a huge fan of sleeping with people before deciding to spend your life with them. And I’m excited that there’s a show in which this is embraced. And the triple play isn’t shamed on the show, but instead seen as a means of gathering data to help decide who and what they want.

I don’t believe the first sexual experience with someone is enough data. And having multiple partners in the course of 48 to 72 hours will impact the distinct sexual chemistry of each encounter, as well as, you know, major life decisions. Right when it feels like our contestant will be overwhelmed by the delirious joy of lover abundance, she is wracked by the anxiety of having to make an impossible choice. In the final throes of the game, the contestant is fucking for love, intentionally trying to create bubbles of intimacy with each partner. A day later, two people lose, leaving the third victorious at the top of a pile of what we are led to assume are less skilled lovers. Generally, easy, hot chemistry wins out over almost every other factor.

The balance of being sexually responsible by keeping it all contained to three nights of passion is thrown out the bamboo framed window in Bachelor in Paradise, a show where rejected contestants from the Bachelor and Bachelorette travel to Mexico to have better luck in love.

And this season, which featured Rachel Lindsay, the first black Bachelorette, and then a controversial start to Bachelor in Paradise, has me thinking about how sex—across and related to race, safety, norms, trauma, and pleasure—is handled on reality TV. Rachel had to put up with awkward jokes about interracial dating, and the pressure to choose a Black man, even though she had the clearest chemistry with Bryan Abasolo, a Gaston from Beauty and the Beast looking dude who was DTM (down to marry).

DeMario Jackson was the most attractive, charming Black man on her show, but he was eliminated when a recent lover showed up on set during a group date. Weeks later, DeMario was cast on Bachelor in Paradise, which has the bad decisions feel of Cancun, but also includes lots of humorous moments. The camera often cuts back and forth between people speaking about each other. Usually one person is excited and even “falling in love” while the other has a “ew I hate him/her” vibe or thinks “he kisses like a firehose.” Given the nature of the —get lonely, nearly naked people drunk on a beach and have them compete with each other for love—I was befuddled by the shutting down of production due to scandal.

I watched the premiere of Bachelor in Paradise, already aware that DeMario Jackson and Corrine Olympios were going to be in a sexual scandal. After they make out, both very drunk, she appears to lead him to a pool to get physical. She seems to be stumbling and confused while he looks super faded. We never see where that leads—the show cuts to other couples and dates. The next day, they don’t seem particularly into each other, high fiving and friend-boxing. Then production stops, dramatically, and DeMario and Corrine are called away. The show eventually has a strange conversation about race and consent without really saying clearly what the accusations were or what actually happened. Unveiling the truth is paced slow, scored with the same music as a rose ceremony.

It seems that DeMario and Corrine had sex while she was drunk and a third party accused him of sexually inappropriate behavior. While I’m glad they’re discussing the mysterious incident in terms of race, I feel intensely uncomfortable with how this is being handled. Bachelor in Paradise is playing a potential sexual assault for ratings, teasing out the reveal of what happened instead of just saying something happened, or nothing happened, here’s what it is, people are okay (or not) and we’re moving on. But so much isn’t being addressed.

Even though other contestants begin coming to his defense and he begins telling his story, the show has lingered so long on the stereotypes of the oversexualized Black man. We learn norms from these shared cultural spaces:

If sex, or sexual harm, happens, keep it off screen.

You can be polyamorous, even a bit of a hoe (in the most celebratory sense), for the sake of finding your husband.

Or for good TV.

Unless it’s with a Black man.

Then it’s only good TV if he’s off the screen.

I’m still watching, but want to move into more responsible consumption. If, like me, you find pleasure in watching the trash, here’s your homework assignment. The next time you’re watching a reality show and see behaviors or conversations around sex that are at odds with your values (and what I really mean is, with a Black or queer or intersectional feminist lens), engage the show publicly on social media with messages like “call it sexual assault and don’t play it for ratings,” “where are the condoms?” or “tonight’s show played up racial stereotypes of hypersexual Black men” or “stop shaming [insert character] for sleeping with her abusive ex in the back of his truck and see if she needs boundary support!” Consume responsibly, loves.