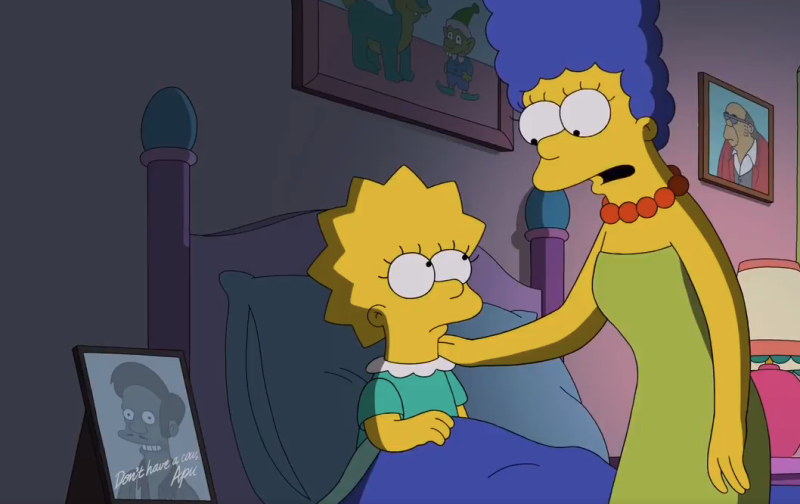 Like so many kids of the ’80s and ’90s, I grew up with The Simpsons—everyone’s favorite cartoon family. Lisa always reminded me that books are great; Bart encouraged me to be a daredevil whenever possible; and so often I learned real lessons about friendship and family from the inhabitants of Springfield. Even though The Simpsons has inspired and entertained kids and adults for 28 years, Springfield is a very homogenous place. The Simpson family is white, most of their neighbors and friends are white, and there are only a few characters of color—and they’re voiced by white actors.

In The Problem with Apu, comedian Hari Kondabolu explored the lack of Asian representation onscreen and used The Simpsons’ Apu Nahasapeemapetilon as a case study. Kondabolu grew up with The Simpsons, too, and focused on Apu because he is one of the few Asian cartoon characters on U.S. television, voiced by the white actor Hank Azaria, who The Simpsons creators haven’t cared to update in any way in the more than twenty years he’s been onscreen. In an interview with Vulture, Kondabolu said that Apu is like “a fossil in nectar, you know what I mean? It’s a great example for us to see because it’s both then and now. Times have changed, but ultimately for me it wasn’t just about Apu. It’s really about where we are as a culture and the fact that racism isn’t a singular thing. It’s a virus. It mutates, and every era, it changes.”

The Problem with Apu drives home the point that Asian representation onscreen is sorely lacking. A 2017 study found that while 69.5 percent of TV series regulars are white, characters with Asian or Pacific Islander heritage make up only 6.9 percent of series regulars. In the survey of 242 shows, only 87 shows (or 35 percent) have a series regular who is AAPI. And just because a show has an AAPI character doesn’t necessarily mean that character is fully represented: Of those AAPI series regulars, 87 percent are onscreen for less than half an episode.

Maybe bad-faith arguments shouldn’t be indulged, but you deserve a lecture when you go so far as to write a whole television episode about why someone’s critique of your work is petty and ridiculous.

The Simpsons responded to Kondabolu in an extremely bad-faith way in Sunday’s “No Good Read Goes Unpunished” episode. In the episode, Marge wants to share her favorite childhood novel, The Princess in the Garden, with Lisa (the fake novel appears to be loosely based on The Secret Garden, Frances Hodgson Burnett’s classic 1911 children’s novel about a spoiled British girl who grows up in colonial India). As she re-reads The Princess In the Garden to Lisa, Marge is shocked to discover a variety of racist lines in the novel, so she decides to re-write it so it isn’t as offensive.

Here’s where the episode abruptly turns into bad-faith trolling: Marge joyfully tells Lisa that she’s fully removed “the spirit and character” of the novel by rewriting it. Marge introduces the main character Clara as “a cisgender girl in South America fighting for wild horse rescue and net neutrality.” (That “cisgender” addition seems like a dig at trans-inclusivity, doesn’t it?)

Lisa then tells her mother that the rewrite doesn’t work because Clara has “already evolved” by the first sentence of the book, so there isn’t any point in continuing the story because there’s no emotional journey. Then Lisa and Marge have a bizarre, fourth-wall-breaking exchange meant to tell us what the show thinks about so-called “political correctness:”

MARGE: What am I supposed to do?

LISA: It’s hard to say. Something that started decades ago and was applauded and inoffensive, is now politically incorrect. What can you do?

MARGE: Some things will be dealt with at a later date.

Lisa and Marge stare at the viewer, who can see a framed photograph of Apu on Lisa’s nightstand, autographed with the words “Don’t have a cow.”

First of all: What?

Other than that long shot of Apu’s photograph, there’s no direct acknowledgement of episode being framed as a response to The Problem with Apu. But it is. It’s a bad-faith argument, and maybe bad-faith arguments shouldn’t be indulged, but you deserve a lecture when you go so far as to write a whole television episode about why someone’s critique of your work is petty and ridiculous.

I think we’re all justified in responding like Kondabolu did:

Dear @AlJean, here is my response to your last Simpsons episode regarding Apu. This is essentially what you said to me and many other South Asian Americans. pic.twitter.com/eoxeZ1Dxw5

Apu, an Indian character voiced by a white man and written by a white writers’ room, was never “applauded and inoffensive.” Asian Americans and other viewers of color have always had a problem with Apu, whether the creators of The Simpsons heard it or not. “No Good Read Goes Unpunished” seems to be the first and only time the show has addressed this critique, and a response that boils down to “we don’t care what you think; we’re not going to change” is just about the worst way the show’s creators could respond. It’s clear now that the creators of The Simpsons are not only unconcerned with correcting the errors of the past, but they are unwilling to correct the same problems moving forward. Dismissing dialogues about racism as mere political correctness (one of the worst Republican tricks in the book) is telling people of color to sit down and stfu.

And this isn’t a case of looking back on an old piece of pop culture, like The Secret Garden, and realizing it has problems that weren’t considered at the time. The Simpsons wasn’t created in 1911 and Lisa is the smartest character on the show, often the moral compass for the rest of her family. Lisa, the wise-beyond-her-years vegetarian, feminist, environmentalist, and Buddhist would never respond the way she did in “No Good Read Goes Unpunished.” Instead of truly grappling with the critique of Apu and the ways in which his character should change, the show creators decided instead to depict Lisa as apathetic, nihilistic, and bored—disinterested in social justice and without any creative problem-solving to address it. That’s just not who Lisa is. The real Lisa would probably have responded like this:

what can you do? pic.twitter.com/F5MIRvNuDT

It’s also worth pointing out that this episode is meant to be a “fuck you” to everyone who has been critical of The Simpsons’ portrayal of people of color, but it features zero lines from Apu or another character of color. (There’s a racist caricature voice for Sun Tzu in Bart and Homer’s B-plot about the fifth-century Chinese military treatise The Art of War). An episode about why Apu isn’t offensive doesn’t feature Apu! Plus, “don’t have a cow” note is Bart’s tagline, not Apu’s, and this line is….suspect, to say the least, given that many Hindus consider cows sacred animals.

Instead of addressing a critique with clarity, honesty, and integrity, the creators of The Simpsons did a wink-wink nudge-nudge response that was so concerned with thumbing their noses at us, it made no sense. This refusal to engage with criticism might be what cements The Simpsons as outdated, irrelevant, and out-of-touch as a fake novel about a spoiled princess. It’s clear that the show’s creators have no interest in a Springfield that truly reflects the diversity of its viewers. That’s going to backfire, as it already has. You can only insult your audience to their faces for so long before they find something else to watch—and someone else to look up to.

5 Feminist Albums That Got Us Through July

Remembering the Unshakable Jewishness of “The Nanny”