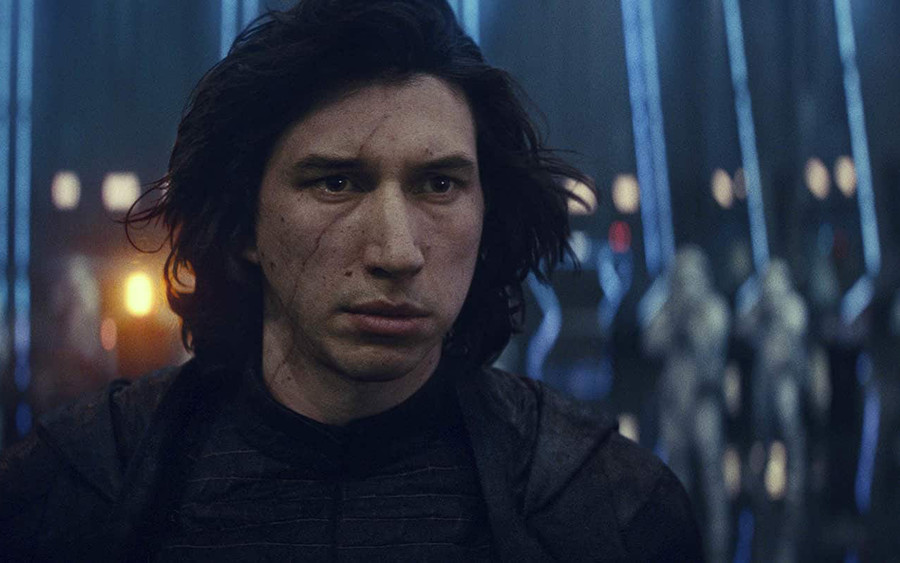 I have complicated feelings about Kylo Ren.

Kylo Ren, a.k.a. Ben Solo, is everything I look for in a good antagonist. Portrayed by Adam Driver, the dark-haired, angsty son of Han Solo and General Leia Organa hits all the marks of an interesting villain: He’s tortured, he has a complicated past, he’s inextricably tied to the story’s heroes, and there’s still good in him—deep down. (He also has a very cool-sounding chosen name, which is not nothing.)

In the most recent three Star Wars outings—2015’s The Force Awakens, 2017’s The Last Jedi, and 2019’s The Rise of Skywalker, Kylo’s journey mirrors that of Darth Vader, his grandfather and the original trilogy’s iconic villain. Like Vader, he starts out as a Padawan training to be a Jedi, becomes disillusioned by the rigidity and failings of the Jedi Order, is courted by the dark side of the Force, and becomes a high-ranking figure under the fascist regime known as the First Order. However, unlike Vader, Kylo does not embody a traditional model of masculinity, particularly when it comes to blockbuster male villains. Darth Vader’s menace was directly tied to his imposing stature: He stood nearly 6’8,” and the cape that enveloped him as he walked gave him the appearance of taking up further space.

The booming voice famously lent to him by James Earl Jones commanded a room. Behind his iconic mask and armor, Vader’s movements were precise and controlled, which made his moments of violence even more terrifying. In contrast, Kylo Ren is smaller and more slender. His long hair frames his face, and he speaks in softer tones. The mask he wears for show is an attempt to emulate his grandfather, but when it’s removed his eyes betray a sense of fear and vulnerability. Like Vader, Kylo is prone to violent outbursts, but rather than invoking outright fear, he gives off the energy of an angry teenage boy—frustrated, unbalanced, and undisciplined. Driver’s nuanced take on the character reads more like a bullied teenager–turned–school shooter than a conventional Hollywood bad guy.

All of this makes Kylo Ren a compelling villain. In one sense, his character subverts traditional ideas of villainous masculinity; in another, his internal struggle to balance the light and dark forces within him stems from his desperate need to live up to the expectations of the men that came before him. Of course, that’s not easy when your father figures are Han Solo, Luke Skywalker, and the Supreme Leader of the First Order. The task becomes nearly impossible when you also stand in the shadow of Darth Fucking Vader (which, as noted earlier, is a very large shadow.)

But Kylo Ren is also compelling because he provides the perfect foil to Rey, the sequel trilogy’s protagonist. Rey (Daisy Ridley) is a young Jedi who joins the Resistance and trains under Luke Skywalker, Kylo’s former master. In The Last Jedi, Rey too struggles to balance the light and the dark within her. Luke, who still blames himself for Kylo’s dark turn, is horrified at the possibility that she might follow him in being swayed by the dark side. They mirror one another in this battle: Rey intuitively knows that Kylo still has light within him and wants him to turn, while Kylo sees Rey’s darkness and wants her to join him instead. They are both inextricably connected by the Force, two sides of the same coin.

This dynamic, as you might expect, makes Rey/Kylo shipping abundant in online fan communities. The characters’ ship—abbreviated as “Reylo”—has inspired thousands of fanfics, videos, podcasts, and fan art. Since The Force Awakens was released, Reylo has existed in Star Wars fandoms across social-media platforms like Tumblr, Twitter, Reddit, and YouTube. It was The Last Jedi, however, that brought the fandom out in full force when it delved into Rey and Kylo’s dynamic in a way that can only be described as very horny. The 2017 movie includes no passionate kiss between the characters, and hardly any physical touching, but the film is essentially the answer to the question: “What would happen if two lonely hot people could FaceTime each other using the Force?” Some of TLJ’s most electric moments happen during scenes when the two are sharing unwavering eye contact or slowly reaching out to touch fingertips. As a viewer, it’s hard not to become invested in the palpable tension between Rey and Kylo in the same way we’re invested in the tension between good and bad, light and dark, the Resistance and the The First Order.

In a 2017 Medium article titled “The Last Jedi: The Most Important Line No One Is Talking about,” Aliya Smyth writes, “The Force itself isn’t light or dark. It’s the tension between light and dark.” Star Wars, at its core, is all about that tension. The original trilogy is anchored by the push and pull between Luke and Vader, and the sequels parallel that strain with the dynamic between Rey and Kylo (TLJ just makes the tension significantly hornier.) Jessica, a writer and fan of Reylo who reached out to Bitch, echoed this sentiment. “Ship them romantically or not, the parallels between them, the friction, the tension, and the rivalry was what drove these films forward,” she said. Another fan of the ship and creative producer for the horror entertainment company Crypt TV, Alyssa, said, “What draws me in about their relationship is the conflict, the seemingly opposing ideals and approaches, and [that they] are linked in this unexplainable way.”

Romanticizing guys like Kylo Ren is not exactly a new phenomenon. From Marvel’s Loki to “Buffy the Vampire Slayer’s” Spike to “Twilight’s” Edward Cullen, fictional men who commit fictional acts of violence have always had large followings of women and girls fantasizing about them.

But, as with almost everything online, the Reylo fandom is not free from controversy. In a recent Medium article, data analyst Katie McCort chronicled the problem with ongoing harassment in the community, particularly against female fans. In “When Systemic Hatred of Women Online Goes Unnoticed, What Does It Say about Us?” McCort documents thousands of tweets, many from alt-right accounts, directed at Reylo fans. Although the fandom includes people of all genders—several men and nonbinary Reylo fans reached out to Bitch for this piece—she notes that a majority of Reylo shippers are women and girls. There is also an unmistakable gendered element to many of the abusive tweets. One tweet from an alt-right account reads, “You haven’t seen this many acne riddled fatty Tumblr Girls lose their shit since Twilight ended.” Another says, “StarWars [sic] was so great before Disney. Now its plagued by psychotic Reylo fans, Tumblr freaks, representation-screeching SJWs, radical feminism activists, ex-Twilight fans, &wine-guzzling [sic] Disney-fan mothers caked [sic] Karen.” As you can imagine, there are countless other examples of tweets like these, ranging from harassment to death threats.

The recently released The Rise of Skywalker has also reignited familiar feminist discourse about women’s representation. Now that TRoS explicitly makes Reylo canon (spoiler alert: they kiss), debates about whether or not this constitutes a harmful relationship depiction are back in full force. On one hand, these are important conversations to have—especially since the original trilogy has been a flashpoint for feminist criticism for more than 40 years. Jess, a writer who describes herself as “firmly anti-Reylo,” tells Bitch, “In the day that follows their first encounter, [Kylo] kidnaps [Rey], attempts to force his way into her mind, kills his father, and seriously injures her only friend in a lightsaber duel.” Truthfully, there are more arguments you can make about why the Reylo relationship is fucked up than in defense of it: Kylo Ren is essentially a space fascist who gave the order to wipe out the Resistance army and was complicit in much of the First Order’s destruction. Needless to say, Kylo won’t be up for a Nobel Peace Prize any time soon.

On the other hand, romanticizing guys like Kylo Ren is not exactly a new phenomenon. From Marvel’s Loki (who totally killed a bunch of people) to Buffy the Vampire Slayer’s Spike (also killed a bunch of people) to Twilight’s Edward Cullen (killed people but felt super guilty), fictional men who commit fictional acts of violence have always had large followings of women and girls fantasizing about them. I can’t pretend that I haven’t historically been one of those girls either: The Twilight phenomenon hit its peak when I was 14, and, like many fans, there was nothing I wanted more than a century-old vampire to end up with a 17-year-old high-school student. Unfortunately, I fully understand the appeal of the dangerous guy with a dark past who has turned good but will maybe turn bad again unless love saves him. I wish I didn’t, but I do.

So, where do we draw the line between fictional fantasies and real life? And should we chastise fans for enjoying depictions of onscreen romance that we’d definitely identify as Not Good if they were occurring in real life? In terms of feminist media critique, constructive discussions and analysis of the entertainment we consume are absolutely necessary and should be encouraged. If the Reylo discourse is any indication, there are multiple lenses through which we can view Star Wars, fandom, and fictional fantasies, and many of them—online harassment and alt-right hot takes excluded—offer valid critiques. However, while Kylo Ren definitely falls into a longstanding tradition of white male villains with tragic backstories being humanized and redeemed, the level of backlash against female Reylo fans has been excessive. Much like the backlash against Twilight and 50 Shades of Grey—which were, rightfully, targets of feminist criticism—a significant portion of responses to Reylo shippers are riddled with misogyny, harassment, and violent threats. Although it’s easy and often necessary to make the argument that Thing Bad, it takes a significant logical leap to conclude that women themselves are therefore bad and deserve online abuse for enjoying the content itself.

Hannah, a nonbinary former educator on healthy relationships, violence prevention, and survivor support, expressed that they felt conflicted about the cultural consequences of romanticizing the two characters. “I could easily argue that Rey and Kylo’s relationship illustrates social expectations of women taking responsibility for ‘saving’ men from their own temper, and that it says Ben’s childhood trauma gives him a free pass for violently acting out. And also that Rey deserves to prioritize her own journey of self-discovery,” they told Bitch. “Yet I have a visceral feeling [that] I am allowed to enjoy the entertainment of it all. I don’t think that their relationship should or could model a modern, mature love story, but it’s one of those ‘let people enjoy things’ things, if that makes sense.”

In a world that is perpetually on fire, both literally and figuratively, I truly don’t have the energy to bring myself to be upset about fans taking refuge in a relationship between two fictional characters. If girls and even grown-ass women want to watch two fictional space wizards kiss, I’m not going to begrudge them their enjoyment—especially when our current cultural and political climate feels so fraught with anxiety. Let’s just try to avoid modeling our real-life relationships on characters like Kylo Ren.

Editor’s Note: This article was updated to remove a sentence that claimed Kylo Ren gave the order to destroy five plantets. The order was actually given by General Hux. (January 27, 2020, 3:41 p.m.) 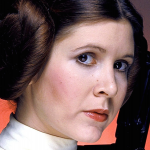 by Victoria Law
I grew up watching the original Star Wars and pretending to be Princess Leia on the playground. But to my 15-year-old daughter, she's outdated.