Social Media Has Taken A Stand Against Lawns | Bitch Media 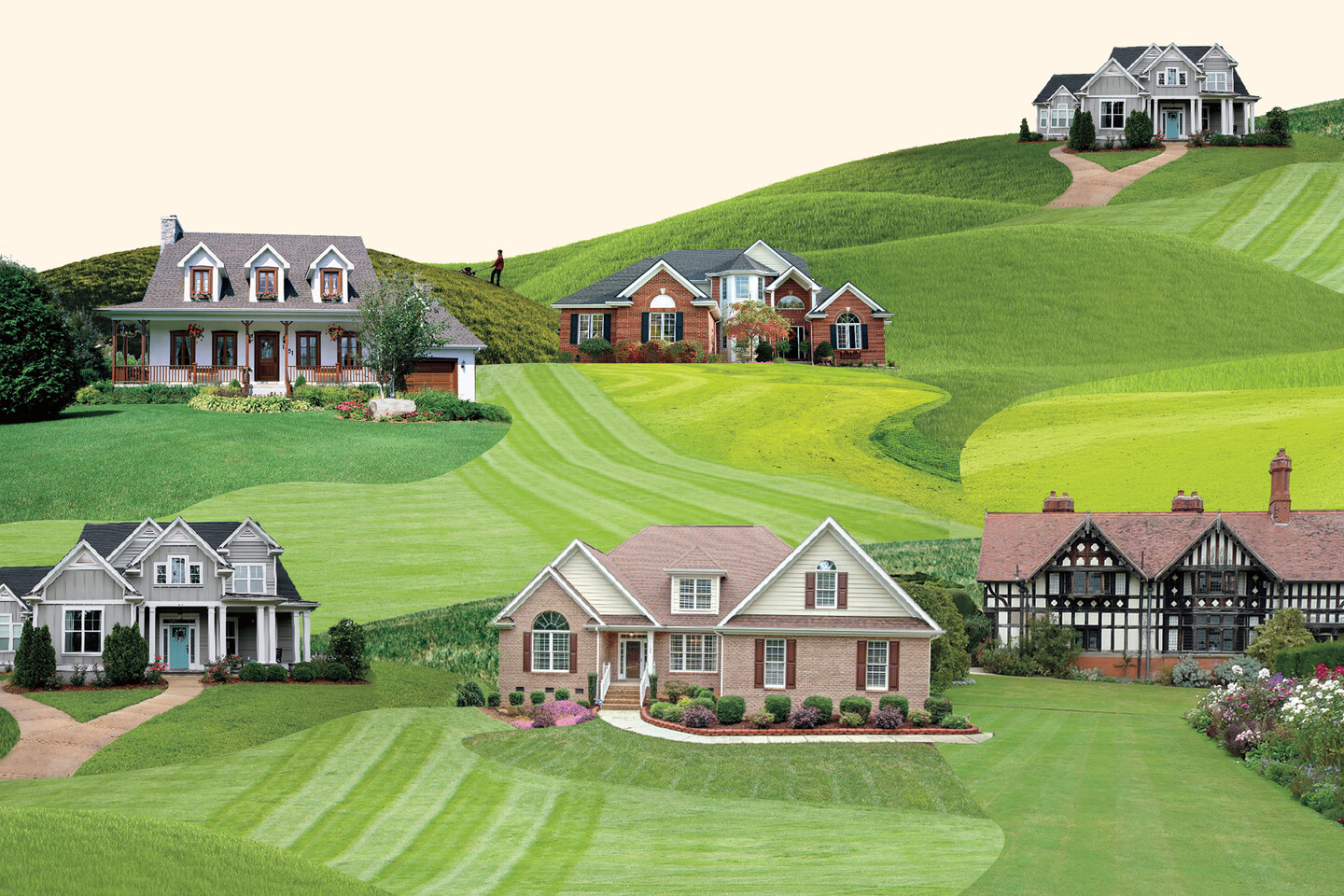 What’s more American than a perfect lawn? Picture it—neat, plush, deeply green expanses connecting rows of houses, giving homeowners a sense of pride and their children a safe place to play. But not everyone sees the lawn that way. If you’re wondering why people would be opposed to grass, look for the memes: In one TikTok video, user @skynoer dances in front of pictures of moss, while onscreen text lists reasons that people should grow moss instead of grass—“Great for water retention and drainage,” “doesn’t need pesticides,” and, simply, “beautiful.” While anti-lawn memes began proliferating more widely in 2020, there is a growing awareness that lawns might be a waste of space and resources.

A 2018 article in the peer-reviewed journal Science claims lawns are the “largest irrigated nonfood crop” in the United States. Despite its name, Kentucky bluegrass, the most popular grass grown for lawns, comes from Europe, Northern Asia, and Northern Africa. Non-native plants usually can’t survive well on their own in new regions. Kentucky bluegrass goes dormant in droughts, therefore turning yellow, so lawns need regular watering, fertilizers, and sometimes, pesticides. According to the Scientific American, runoff from fertilizers and pesticides can pollute our waterways. The larger the lawn, the more water, time, money, and other resources are needed to maintain it. The environmental cost of lawns became more widely discussed in 2015, when Californians used the hashtag #DroughtShaming on Twitter to chastise celebrities, wealthy people, and sometimes, their neighbors for not conserving water.

In Los Angeles, a resident known as the “wet prince of Bel Air” used 11.8 million gallons of water a year—100 times more than the average American family. Tabloids cashed in on the public’s anger by publishing aerial photos of celebrities’ homes during the drought, exposing the thriving green lawns of the Kardashians, Barbra Streisand, Tom Selleck, and other celebrities. In 2015, Megan Garber covered the phenomenon of drought shaming in a piece in the Atlantic that argued lawns were “symbols of American entitlement.” Ultimately, drought shaming characterized green lawns as synonymous with excess, and a growing anti-lawn community also started to scrutinize privatized green space, including golf courses. The concept of some people being allowed onto spaces like golf courses and country clubs only to perform the labor necessary to maintain those spaces for the rich is a clear indicator of inequality and greed. In 2020, Abbie Richards, a climate studies student, went viral for her TikTok videos advocating against golf courses.

In a video with more than 2 million views, Richards states that if she were president, she’d turn golf courses into public parks and country clubs into low-income housing. “It’s such an injustice essentially for the rich to be able to privatize their green spaces, because access to green space is a really important part of people’s physical and mental health,” Richards told USA Today. Lawns are also representative of whiteness: The non-native grass now ubiquitous in North America was originally grown here for the purpose of settler agriculture. In the 1600s, livestock brought from Europe to North America began to starve because of the lack of grass for grazing. Colonists imported seeds to grow plants like Kentucky bluegrass, interfering with the environment and creating a monoculture that now drives away bees, butterflies, and other pollinator insects. This grass was later used by prominent figures like George Washington and Thomas Jefferson who had a vested interest in replicating the European elite’s “great, sprawling lawns,” which had no agricultural value but displayed high status. New York Times senior video journalist David Botti reports on this, going on to point out that though Washington and Jefferson helped popularize lawns in America, enslaved people were the ones to actually maintain them.

By the late 1800s, new technology like the first lawn mower and sprinkler grew the business of lawn care for wealthy suburbanites, but the post–World War II era marked the beginnings of lawn care as a mainstay in white American culture. In her 2015 book The Lawn: A History of an American Obsession, Virginia Jenkins writes about how the lawn-care industry rode the wave of post-war economic recovery to appeal to middle-class homeowners during a housing boom. “[The lawn] was the essence of America for young men and women who had witnessed foreign, war-torn landscapes,” Jenkins writes, adding that by the 1950s, front lawns had become an integral part of the physical and cultural American landscape. Homeowners Associations (HOAs) gained popularity in this era because white homeowners felt the need to regulate the growth of suburbs by keeping Black Americans out. It’s not a stretch to suggest that a suburban lawn still represents whiteness and wealth despite its present-day prevalence in increasingly diverse middle-class neighborhoods. People of color and immigrants who aspire to the American dream can replicate the exclusionary ideals the dream is built upon. In 2020, Business Insider reported that even today, HOAs tend to target Black homeowners for things their white neighbors aren’t fined for. Considering that there are over 370,000 HOAs in America representing more than 50 percent of all households, forgoing lawns and creating more biodiverse spaces may not be as easy as one hopes.

It’s not a stretch to suggest that a suburban lawn still represents whiteness and wealth despite its present-day prevalence in increasingly diverse middle-class neighborhoods.

In fact, thanks to municipal regulations, people deal with harsh fines and even jail time for failing to maintain neat lawns: Frank Yoes, a then 57-year-old in Grand Prairie, Texas, was jailed for two days in 2015 because he couldn’t afford the $1,700 fine the city slapped him with for an overgrown lawn. In 2019, the city of Dunedin, Florida, fined then 69-year old Jim Ficken $30,000 for his unkempt lawn, which was growing tall while Ficken was away caring for his sick mother. The city then moved to foreclose on his home. On the other hand, some municipalities are now encouraging people to ditch lawn culture. Burbank, California, is offering up to $2 for each square foot of ripped-up grass, incentivizing residents and businesses to create water-wise landscapes. People are also banding together against lawn culture. The “No Lawns” subreddit, created in early 2019, features daily posts from people seeking and sharing advice on growing more native plants and disregarding the “boring grassy lawn.” Food Not Lawns, a 25-year-old international community promoting sustainable gardening, shares options for people feeling overwhelmed by the prospect of getting rid of their lawns, including planting things you love to eat and collaborating with your neighbors. If it sounds like too much work, the Canadian Wildlife Federation suggests taking the “wild patch” approach and leaving a section of your lawn unmowed.

While many may think that lawns are too deeply embedded in our expectations of how outdoor space is cultivated and maintained, it’s important to remember that lawns are a recent mainstay in North American culture. It’s easy to react incredulously to the criticism being made about lawns, but the environmental cost of lawns, their history, and present existence as a fruitless status symbol is glaring. Having a lawn doesn’t make you a bad person, but if you’re privileged enough to own land, recognize the potential of what your space could be—environmentally friendly, biodiverse, and simply, more interesting.

Read this Next: Waste Land: For Migrants, Water Bottles Are a Matter of Life and Death 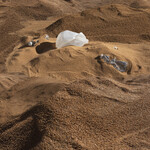 by Barbara Sostaita
Plasticity has historically been denied to the racialized “whose bodies are seen as rigid, inflexible, overly reactive, and insufficiently absorptive, contagions to the potential growth of the population.” Whiteness is defined by plasticity, by the capacity for change and growth. The land is allowed to change and grow, but only when it serves the interests of the state.