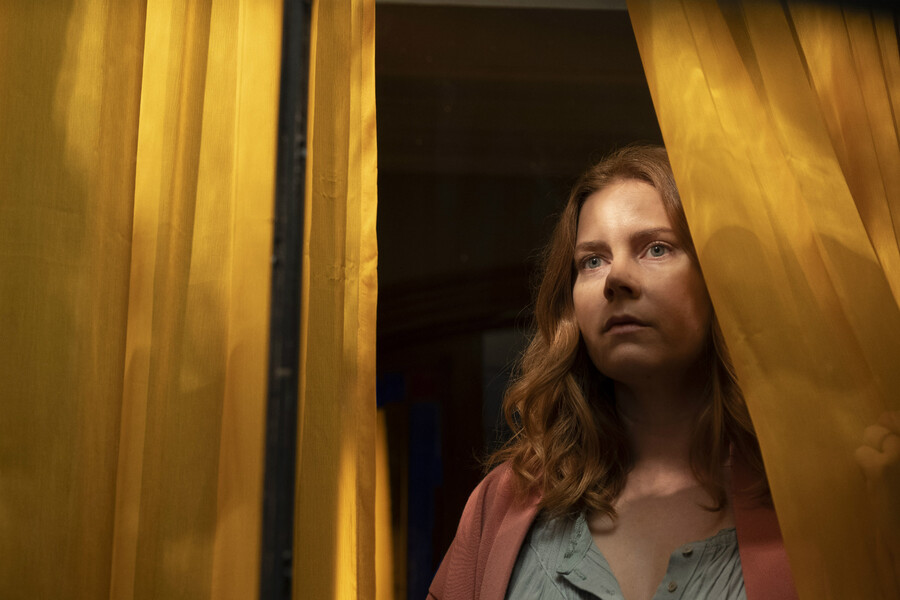 Amy Adams as Anna Fox in The Woman in the Window (Photo credit: Melinda Sue Gordon)

Joe Wright’s adaptation of A. J. Finn’s 2018 novel, The Woman in the Window, isn’t particularly good, but it does present an interesting thriller about the oppressions existing at the intersection of disability and gender. The film, released on Netflix on May 14 after multiple distribution delays, follows Anna (Amy Adams), an Agoraphobic child psychologist living in a lavish New York City brownstone with one tenant living in her basement apartment. Anna hasn’t left her house in years, so her primary connection with the outside world comes through watching people outside her windows. We learn early on that she’s “separated” from her husband and child, taking numerous psychiatric medications, drinking a lot, and closely monitoring suspicious new neighbors who’ve recently moved in across the street.

Though the plot is simple, it sets the stage for a series of horrendous events that unfold as a disabled woman’s warnings are repeatedly ignored. Set almost entirely within Anna’s house, The Woman in the Window feels at times like a stage play, and not just because of the relatively static setting. The acting is also somewhat overwrought and excessively demonstrative, with Adams, in particular, hamming it up for the camera in a way that would carry well on stage, but isn’t as effective on film. There’s a sense at times that everyone involved felt like they had to overact to make up for the claustrophobic setting as Anna moves from bedroom to kitchen to hallway again. Overacting aside, the film has a persistent sense of tension and constant danger amplified by an accelerated time scale and ominous score.

As Anna’s obsession with her new neighbors deepens, she witnesses violence and shouting as the husband, Alistair Russell (Gary Oldman), abuses his family. She drags her tenant into her theories that the wife, Jane (Jennifer Jason Leigh, but also Julianne Moore—more about that in a moment), and her son, Ethan (Fred Hechinger), are in trouble. She calls the police multiple times as she hears screams or thinks someone is in her apartment, setting up a core plot point: No one believes her reports, and the more she sounds the alarm, the more dismissive they are. After all, she’s a woman on psychiatric medication who lives with her cat, so the police treat her first with pity and then as a nuisance: unreliable, hallucinating, and tormented by conspiracy theories. A snarl of truth, lies, and deception emerges, something certainly familiar to Daniel Mallory (the man behind “A.J. Finn”), an author who perpetrated a truly wild and expansive series of scams.

Anna’s tenant mocks her, belittling her for being unable to leave the house. But she’s housebound for reasons that are used throughout the film to undermine her trustworthiness—that “separation,” for example, was a lethal car accident with Anna at the wheel that killed her husband and daughter. The conversations we think she’s having with her husband are really conversations with herself. The “woman sees something terrible and is ignored when she calls for help” narrative is a pop culture trope that dates back to Cassandra, the seer who warned of the fall of Troy in Aeschylus’s Orestia. But it’s more layered and complex in this case: Instead of being called crazy, Anna is literally ill. She has an anxiety disorder so severe that she can barely even bring herself to unlock her own door, let alone go outside, and is known throughout the neighborhood as a shut-in.

Anna was a calculated and brilliant choice of protagonist for a thriller in part because viewers are predisposed to disbelieve her; she’s the epitome of a tragic, hysterical woman—the kind of character who’s easy to write off and should be a victim rather than a heroine. Dismissing women’s voices on the grounds that they’re “crazy” is all too common, something mentally ill women in the real world are very aware of as they police themselves in order to be taken seriously. Those with agoraphobia and other misunderstood and frequently mocked conditions often become the butt of jokes and the target of rude, scornful comments. Anna is no different; she’s struggling with both the difficulties of her condition—like trying and failing to run out of the house to help Jane or feeling powerless to act when children egg her house on Halloween—and the refusal of the people around her to believe her. A female police officer gazes at her pityingly as she insists that the woman right in front of her isn’t Jane because Jane was murdered.

As a narrative about how we treat women, especially mentally ill women, The Woman in the Window almost succeeds.

Everything Anna says is written off, not least because Jane (Moore) appears alive and well. This is used as further evidence of Anna’s deranged state, but it turns out that the truth is more complicated. The woman Anna knows as Jane was actually someone else—Ethan’s birth mother (Leigh), who was indeed murdered by Ethan. The film’s denouement involves Ethan chasing Anna through the house after killing her tenant, and a bitter struggle between the two of them ends with Anna throwing Ethan through a skylight in self-defense. In this moment, she’s validated and vindicated, with the police expressing remorse that they didn’t take her seriously, and a dramatic stylistic shift as Anna emerges into a new life. The lighting changes, the trees come into view, and the film’s final moments—in which Anna emerges from her empty house into the sunshine—is a symbolic moment of transition for a character who has found peace at last.

This tidy ending is quite a shift from the rest of the film’s thoughtful interplay of disability, social attitudes, and consequences. Agoraphobia, particularly severe forms, can’t be cured by evading death at the hands of a murderous teenager.  Indeed, this ostensible catharsis reinforces the damaging idea that it’s possible to simply “snap out of” severe anxiety and trauma. The Woman in the Window explores disability in an intimate way, yet ultimately returns to a cultural status quo. The film also doesn’t touch upon a racial element: A mentally ill woman of color, no matter how wealthy, no matter how nice her home, would not be treated as she is, and would be much more likely to end up dead in a police encounter.

Given that much of The Woman in the Window is about Anna’s interiority and journey, it might be challenging to introduce this thread, but not necessarily impossible, especially given that Anna’s husband and child were Black. As the film explores the ways in which mentally ill women are marginalized, it’s critical to acknowledge that the experience of mental illness is mediated not just by gender, but also race. As a narrative about how we treat women, especially mentally ill women, The Woman in the Window almost succeeds. But in the end, it falls apart in its haste to return to familiar ground and the desire to end the story on an up note that involves escaping the prison of the home, in the process leaving women in these positions feeling even more isolated and lonely than before.