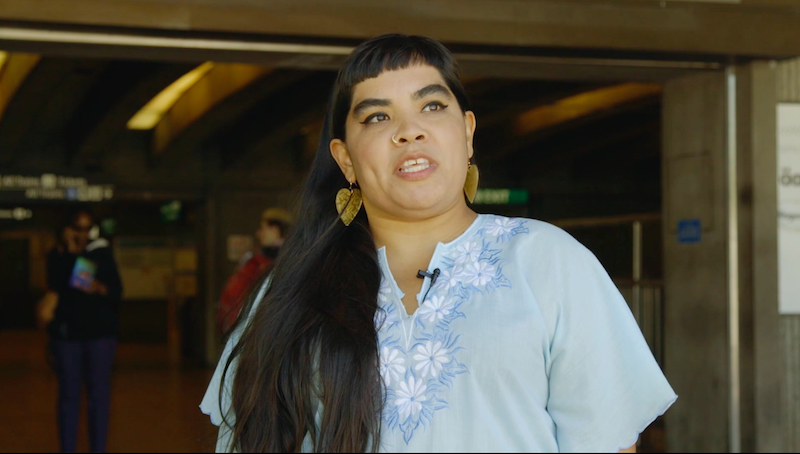 A still from the film Forty Years, courtesy NOW!

In the video, a woman stares at the camera and says, “Virtually all women, but particularly younger women, are subjected to being pawed in public places…obviously this is an incredibly humiliating experience for us.” This sounds like a commentary on Donald Trump’s behavior this election. But it’s not—it’s a woman reading aloud a letter sent to Ms. magazine in 1974.

Filmmaker Irene Lusztig is collecting video of modern-day women reading aloud from the Ms. letters section from 1978 to 1980 for a film called Forty Years. What’s striking about the letters seen in an 11-minute excerpt of the film that was published last week is how relevant the letters seem four decades after they were first written. It’s both depressing and enraging, says Lusztig, how these letters about sexual harassment and assault could easily be describing the Republican presidential candidate. “Many of the men I know have been really quiet on social media around all of these issues of sexual assault and harassment…or else they seem surprised and shocked to learn that so many women have a story to tell about assault,” says Lusztig via email. “None of the women I know are surprised.”

Forty Years by Irene Lusztig from Now! Journal on Vimeo.

Lusztig is a feminist filmmaker whose long-term projects, like The Motherhood Archives, often focus on gender and history. Forty Years is part of a larger still-in-process project called “Yours in Sisterhood”—so far, Lusztig has recorded roughly 200 people in 13 states reading letters from the Ms. archive. In our era, where conversations about feminist issues happen on platforms all across the internet—and are often quickly lost as the digital ephemera of Twitter and Facebook isn’t archived—it’s interesting to reflect on a time when media outlets for feminist voices were extremely scarce.