They Got the Beat: How a Female Beatmakers Collective is Reshaping Electronic Music Culture | Bitch Media

They Got the Beat: How a Female Beatmakers Collective is Reshaping Electronic Music Culture 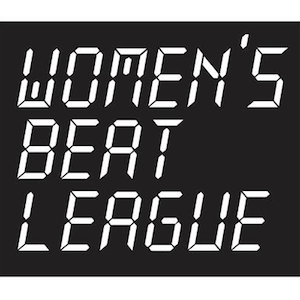 Music scenes often function, by and large, as exclusive boy clubs with rigid social hierarchies. Setting out to create your own sound without the support of a community can be intimidating. This need is what drove Alyssa Beers, Felisha Ledesma, and Daniela Serna to create Women’s Beat League, a collective of female and non-binary-identified electronic artists. Currently operating in Portland, Oregon, the group is hoping to inspire similar outfits around the country.

What began as a conversation between Beers and Serna about their shared interest in DJing and the need for diverse lineups turned into a collective with the assistance of Ledesma and the community space she runs called S1. Through education, community outreach, and artistry the trio are fostering support for women interested in entering the world of electronic music. In doing so, they are actively reshaping DJ culture to be more inclusive. Women’s Beat League is forgoing the who’s-who of the music scene and focusing on what’s most important: creating music. The group curates lectures and offer hands-on, sliding scale workshops for all skill levels. Inspired by the work they’re doing, I sat down to speak with the women behind the collective to talk beginnings, microaggressions in the music scene, and where the organization is headed.

EMILLY PRADO: What inspired you to create Women’s Beat League and what do you do?

Daniela Serna: We have varying experience working within the music scene. Felisha has been clearly involved and making music for a while. Alyssa and I are pretty new at DJing and it can be really daunting to break into as far as finding the equipment and the resources to get good at what you want to do. It can be hard—especially if you don’t feel like you have a network of people you can count on.

Alyssa Beers: We are friends with a lot of musicians and after Daniela started DJing, I was interested in learning how it worked. She was really responsive to talking to me about her process of learning and it was great to team up with someone who was learning at the same time. It was pivotal to have [the Women’s Beat League] be only women because all of our DJ friends [at the time] were men and even if they weren't [intentionally] patronizing, it often felt like they were. But talking to Daniela about music felt very accessible and we thought that it would be the most amazing thing ever to have a bunch of women all meet up and do the same thing together, so we just did it.

Felisha Ledesma: Besides wanting to be involved with my good friends, it is hard when I'm booking shows to [realize] I’ve asked all the women I know who would fit on a show and feel really sad when I can’t find another [female musician]. I thought maybe there would be women who would come out of the woodwork that I had no idea about, who aren’t necessarily a part of my close circle. [I envisioned] all of these women who were going to come together, plan things together, and [there would be] women that I didn't have in my community before.

A track by Alyssa Beers

How would you describe DJ culture? Is it receptive to women?

Daniela: With the culture surrounding DJing, people are very concerned with the type of equipment you're using and the hierarchy of gear. You walk into a club and you know how to set up your equipment and still, I've had people try and explain to me what a mixer is and how to plug into channels. I've also had people ask if my mixes are pre-recorded because there are subtle and not-so-subtle ideas about how you should DJ and who should be DJing.

Alyssa: And what you should be DJing! That's never been the way that I've interacted with music. With Women's Beat League, we've found a bigger way to talk about music, what we're doing, and the way it's making us feel. How we're participating is a little further removed from the DJ culture idea of “do you have the newest tracks.” That hasn't come up at all. People are more like, “the vibe of that was awesome, that was so interesting” and that's way more important to us.

Daniela: I’ve certainly found that with the ladies we've worked with, [they’re] coming into it from an outside perspective and it gives you this freedom to experiment with your sound in ways that coming up in “DJ Culture” doesn't give you.

Where do the materials you are using and funding for the beat league come from?

Alyssa: Us or borrowed. Right now, we're working on contacting companies to ask for donations. We've relied on all of the teachers to bring their gear for people to play with and we've had friends let us borrow turntables. It's very DIY but moving forward we're definitely planning to secure grant money to get more gear and pay teachers really well. For now, if there's an entrance fee to the classes it goes straight to the teacher.

Daniela: We've been really fortunate that these women we've reached out to, whom we admire, have responded so positively and have been willing to put in the time to lead a class and accept donations. When talking about doing an Intro to CDJ workshop, we're talking about super simple things that would be covered in the first few minutes of a Youtube video. People who show up who are interested [and] we are willing to answer any questions people have. [It] creates this really nurturing environment where people feel comfortable experimenting where maybe they wouldn't have if they were at home by themselves.

A track by Daniela Serna

Are there any specific communities that you're trying to work with that you haven't yet?

Felisha: I would love to work with younger people. We like working with teens and I'm excited because we are starting a modular synth library at S1 in conjunction with beat league and in partnership with 4MS. People will be able to take Intro to Synthesis classes and come to S1's library hours to use the gear and record. Half of the classes will be for female and non-binary only and the other class will be open for everyone. It's a really amazing thing that this is going to help the community with access to cost-prohibitive modular synths and I can't wait to see the kind of work people make.

Daniela: Access is such an important thing because what you have access to and your immediate surroundings dictates what you're going to be doing and the interests that you have. Growing up, we didn't have art classes at school and I never got into art. Now, it's only in my twenties that I even got into it. Providing access to this community, equipment, and support really encourages creativity and makes for inclusivity.

What have been some of your favorite WBL workshops?

Felisha: I loved Sharmi Basu's Decolonizing Sound. It was really nice to see people from the workshop also go to the show to talk to her about her music and practice.

Daniela: The Decolonizing Sound workshop was very singular and powerful. [We had] a space to discuss ideas about not only colonialism in the grander sense, but colonialism in art, in individual practice, and through the restrictions you place on yourself and how you sense yourself. Sharmi was very bold – she made it clear that the workshop was for people of color and she wanted everyone to know that people of color had the floor. She asked questions that I had never even considered. I had never really thought about my DJing as political and it's really empowering to think of it that way because you realize you're making these small steps to make a better, more inclusive world through your practice - whatever it is. To talk about how my [selection] of tracks from the African Diaspora and tracks from Latin American producers is intentional and to say out loud why I was doing it was really powerful. These are underrepresented voices that need to be heard in Portland, Oregon and to share this with a room of people who also have these unspoken ideas about their own work was really moving.

Alyssa: It's also really good for allies to be able to hear things like that and be quiet, aware, and really listen. Often times, you may have ideas of how other people think or feel about their experiences, but you have no idea. To let people tell you how their lives have been affected or how these experiences have changed the community that you're actually involved in is really eye-opening.

DS: We also hosted the Black Madonna who is a DJ/Producer working out of Chicago and has gone from being a DJ in some podunk town to booking at Smart Bar Chicago. She did a lecture at S1 about the politics of dance music and how [it has] historically come out of marginalized peoples' responses to political environments; with disco coming out of gay culture and the gay liberation movement and house music coming out of disenfranchised African American communities. She is so personable and knowledgeable that we all felt really fortunate that she took the time to come out and speak to a room of 50-60 fans.

And finally, who are you currently listening to right now?

Alyssa: Lena Willikens  was a really important DJ in my life. It has nothing to do with gender, and more to do with having the guts to genre jump and play literally anything at any moment. It’s sets like that which keep you curious and intrigued and wondering what crazy jam will come next.

Felisha: Someone that I really appreciate in town and who is kind of apart of our group is Sofía Acosta [of] Coast2c. I would put her on every single show if I could. She wants to produce so she's going to be an artist-in-residence through the synth library. It's in this way we go full circle - she teaches Women’s Beat League classes, is a part of our community, and she's going to learn to make her own music with modular synths.

You can keep up with Women’s Beat League through their new website and on Facebook. They’re also the hosts of a new XRAY.FM show that airs Fridays at 1 AM and streams online every week. 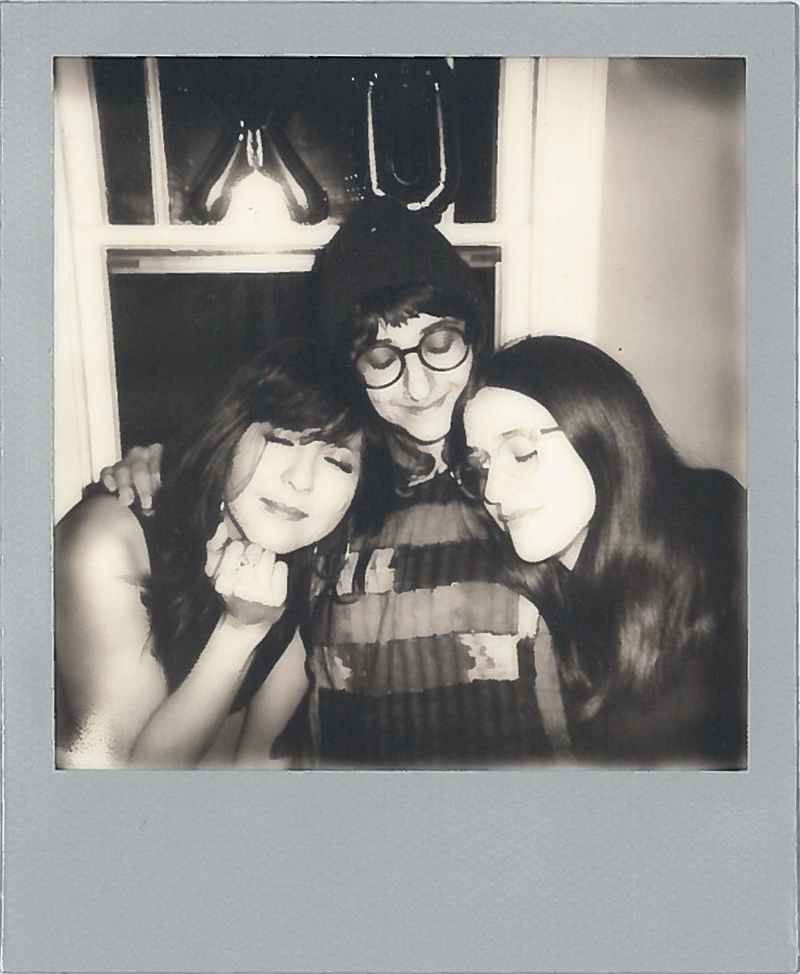 by Grace Manger
"Inevitable" is all about coming to terms with her queer identity and falling in love with another woman.