This is UsIn Jordan Peele’s New Film, the Tormentors Look All Too Familiar 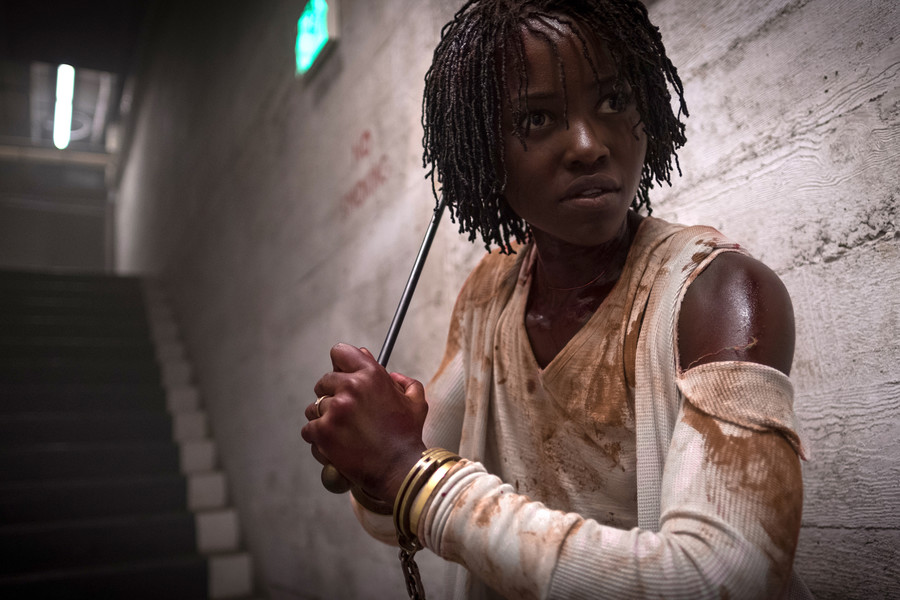 Lupita Nyong'o as Adelaide Wilson in Us (Claudette Barius/Universal Pictures)

Warning: Spoilers ahead for the new film Us.

Jordan Peele’s Us is a film designed to be open to interpretation. It ignites a unique response that feels different for all of us, based on our backgrounds and view of the world. Leaving the Paramount Theater at SXSW, I eavesdropped on chatter that revealed as much. Viewers attempted excitedly to peel back the layers of the film and began the task of dissection. At the Q&A, Peele had expressed excitement at the prospect of discussion and debate over the film. Like many genre directors, Peele sees more value in the discussion than anything else. Still, one could sense in Peele’s demeanor that he wanted the film to stand for something, despite his reluctance to reveal his intentions.

The film’s setup is refreshingly simple—a self-contained, well-off family on vacation is menaced by forces beyond their control. It’s a well-worn trope that’s long been employed in home-invasion thrillers (The Strangers, Funny Games), supernatural frightfests (The Amityville Horror, Poltergeist), and even comedy (What About Bob?). Since their inception, suburban-invasion narratives have used horror to explore the anxieties of social, political, and racial transformation—the paranoia of white flight, the greed of unfettered development—and unsettle audiences by reminding them that safety is an illusion, that what they believe they own has never belonged to them. Us takes this concept even further, presenting the invaders as mirrors of those they terrorize, daring audiences to question who the real villains are.

The Wilson family is the perfect target for mayhem. The kids are bored; their mother is reluctant and disinterested; and their father is in charge and determined to make their vacation fun even if it means coaxing them into bonding activities. As Gabe, Winston Duke makes for an adorably corny patriarch—like many a horror-movie dad, he means well but doesn’t listen to his family as much as he should. Shahadi Wright Joseph and Evan Alex bring humor and likability to, respectively, bratty older sister Zora and trickster little brother Jason. But it’s Lupita Nyong’o as the quiet, contemplative Adelaide, who makes the film. It’s rare in the horror genre to see a Black woman who’s not only the star of the film but also its mind, and in her dual roles as Adelaide and her tethered twin, Red, Nyong’o commands the screen, pushing viewers to identify with the anguish of a Black woman questioning the world and her place in it.

The figures who disrupt the Wilson’s vacation aren’t strangers, exactly. They’re the physically identical counterparts of the family members, displaying exaggerated characteristics of each without the tempering that comes with empathy and love—and carrying with them sharp, golden scissors. Gabe is mirrored by the silent, brutish Abraham. Jason is reflected in Pluto, a child who is more mischievous pet than human. Zora’s twin Umbrae is an outsized image of teenage cruelty and detachment. Peele has discussed the role of these doppelgängers—the Tethered—as symbols of human duality, the embodiment of the idea that we are all our own worst enemies. But they are also all too real: As an underground people bound to their identical masters, the Tethered never had the free will to choose their partners, their professions, or their fates, and are now ready to breach the surface and claim the lives and luxuries they were denied.

Us presents the invaders as mirrors of those they terrorize, daring audiences to question who the real villains are.

Of those tethered to the Wilsons, Red is the most complex: She’s the only one with the ability to speak and the demonstrated regality of a leader. Nyong’o plays her as a raspy-voiced, meticulous mastermind, hell-bent on retrieving the life she believes herself entitled to. It is her mind alone that orchestrates the calculated attack on the Wilson family, driving them away from their comforts and into an increasingly bleak world.

My personal interpretation of Us is quite straightforward: Despite our physical individuality, we are bound to each other. The choices we make, the way we vote, the energy and effort we put into the world will inevitably affect other people whether we acknowledge it or not. Us is a film about the ways we can be complicit in the suffering of others without even knowing it. There’s no denying that the Tethered have lived in agony as shadows of their successful counterparts, and their desire for freedom is so understandable that it can be difficult to think of them as villains at all. Despite the violence of their methods, their wants are exactly the same as our own. Who’s to say that they deserve less than others?

Adelaide’s initial responses to the Tethered suggest that she’s unsure of the answer: She wants to protect her family and give her tethered twin the acknowledgment she deserves. Driven by a mysterious guilt, she becomes a matriarch prepared to sacrifice herself for her husband and children. But for Red, it’s all or nothing, and as tension mounts Adelaide shrugs off her guilt in favor of entitlement and a brutal rejection of whatever responsibility she may hold for Red’s suffering. As in earlier suburban-invasion movies, the conflict between the Wilsons and the Tethered is easily read as an economic one. Capitalism teaches us the lie that some people are wealthier than others simply because they work harder and thus deserve wealth. Us rejects that lie and reminds us that the Wilsons aren’t as special as they think they are—and are certainly not above having to reckon with what they owe to their community.

Underscoring this is the film’s prominent incorporation of Hands Across America, a 1986 fundraiser for hungry and homeless Americans whose lofty goals never truly came to fruition; an advertisement for the campaign is presented in all its hackneyed glory at the beginning of Us, only to return later laden with bitter irony. It’s a sly plot point by which Peele adds even more depth to an already thematically rich story: While the Wilsons compete with frenemies the Tylers (Elisabeth Moss and Tim Heidecker) for upper-middle-class status symbols, the Tethered must fight for even the smallest semblance of dignity. For those soured on the promise of the American dream and forced to watch, paralyzed, as the wealthy seek to obtain even more than they already have, an uprising would be the logical next step.

Though visually brutal, Us is ultimately a meditation on ideas of identity, worth, and ownership. Peele took what could have been a standard home-invasion story and infused it with thoughtful, timely social relevance. With Us and his stunning 2017 debut, Get Out, Peele encourages his audiences to identify with characters often left out of genre fare, in the tradition of ’90s horror films like The People Under the Stairs, Tales from the Hood, and Tales from the Crypt: Demon Knight (all of which are highlighted in the recent Shudder documentary Horror Noire). It’s one thing to say that you want to make “social thrillers,” as Peele did in a 2017 Business Insider story, but those intentions could never fully come to fruition without the kind of performances that transform films into classics.

The real genius at work in Us is Nyong’o, who anchors the story with underlying rage as well as the protective qualities usually reserved for male leads. As both Adelaide and Red, Nyong’o is a lioness—quiet and protective of her own with a streak of calculated brutality. Her instantly iconic moment comes after the Wilsons realize they’re in real danger, and Adelaide yells at Gabe: “You don’t make the decisions anymore!” It’s a definite power shift—and a moment that punctures much deeper than a pair of golden scissors.

Read this Next: “Get Out” and the Ineffectiveness of Post-Racial White Feminism