The Insurrection at the U.S. Capitol Is as American as Any Violence | Bitch Media

This Is Exactly Who America Is 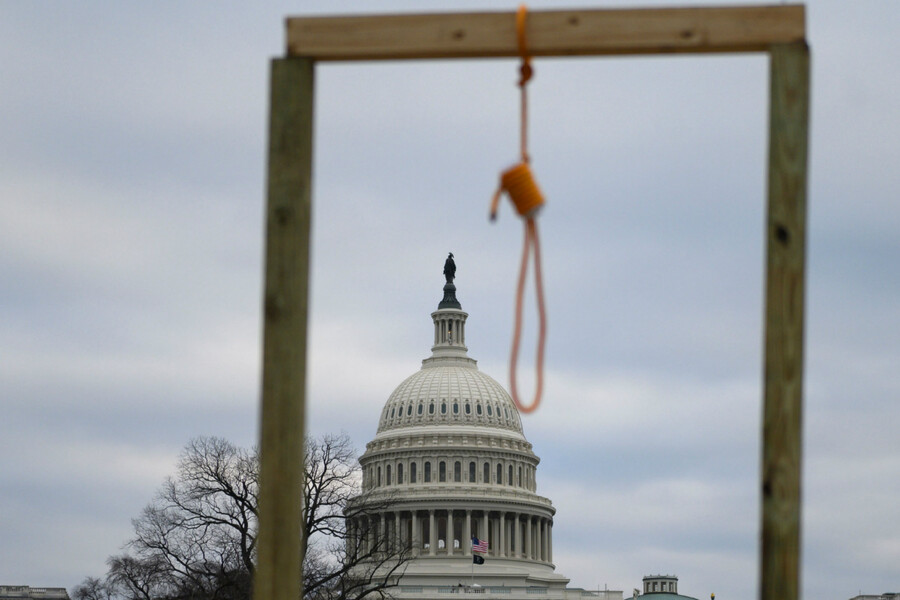 A noose is seen on makeshift gallows as supporters of President Donald Trump gather on the west side of the U.S. Capitol in Washington D.C. on January 6, 2021. (Photo credit: Andrew Caballero-Reynolds/AFP)

My daughter’s middle name is Maude. She was named after my maternal grandmother, Rosa Maude, the wife of a sharecropper and mother of 11 children. I wanted my daughter to have a name that signified courage, and I could think of few things more courageous than raising children in the Jim Crow South—a place that despised Rosa Maude’s family and saw them as less than human. The story goes that my grandmother would call out to and count her children every night, refusing to rest until they all safely crossed the threshold of the front door. I imagine this must have been an unfortunate ritual for many Black parents of that time—and it remains one today.

For Black people, myself included, white nationalism is much more than a political ideal; it’s a free pass to harm and destroy bodies, lives, communities, and futures. The fact that white rage continues to mutilate and murder in this country, seemingly without consequence, reminds me of “Stranger in the Village,” James Baldwin’s 1953 essay published in Harper’s magazine. In the essay, he ponders white America’s seeming obsession with remaining in the past, writing that “people are trapped in history and history is trapped in them.” America’s history is trapped in me. It courses through my veins and builds (and breaks) my bones. Stories of public lynchings celebrated by smiling white families; kin fleeing north for safety; rapes committed by white men that would never be reported, let alone tried in court; whole towns destroyed by white lies; beatings and jailings for simply attempting to exercise one’s right to vote—all of these were familial whispers before I understood them to be historical facts. Note the use of “whispers:” Speaking too loudly about America’s ongoing barbarism could have placed my family in legitimate danger.

This is the America I know, but it’s also the American legacy that so many in this country choose to ignore. I was not at all surprised as I watched a white mob, donning confederate flags and “Camp Auschwitz” sweatshirts, attempt to violently overtake the U.S. Capitol on January 6. It was an attempted coup—the first attempt since the War of 1812—replete with guns, bombs, and cries for the blood of those planning to confirm President-elect Joe Biden’s victory. Though many of Donald Trump’s supporters have been yelling about how much #BlueLivesMatter as Black and Brown people have organized against police brutality, they scrapped with Capitol Police—calling some of the officers on the scene traitors and others the n-word. These white nationalists called their savagery patriotism—just as they did in Greenwood, Oklahoma; in Los Angeles during the Chinese Massacre and the Zoot Suit Riots; and more recently, in Michigan as members of an anti-government militia plotted to kidnap the state’s Democratic female governor. The manner in which white supremacy is allowed to run-a-muck and destroy efforts to push this nation toward what its forefathers seemingly envisioned is boundless and unceasingly heartbreaking, but it is not revelatory.

Yet I find it perplexing that many (mostly white liberal) Americans are using this act of sedition to remind us that this is not “who we are.” It’s a line of thinking as insidious as any of the rhetoric coming from Donald Trump and his fascist minions—a sentiment I share with others. In a recent essay for The Cut, Bitch Media’s editor-in-chief, Evette Dionne, warned against our habit of talking about treacherous events like these in isolation, writing, “Once again, we’re asked to treat white-nationalist violence as an anomaly unworthy of further discussion—a disruption in the American experiment rather than a defining feature…We are not so exceptional as to be exempt from corruption, greed, hypocrisy, oppression, tyranny, and, eventually, decline, especially when our history bears out whom our terrors most impact.” There’s a reason this amnesia recurs: Charlene A. Carruthers, an organizer and the author of Unapologetic: A Black, Queer, and Feminist Mandate for Radical Movements (2018), said that certain Americans are worryingly invested in the “America is better than this” narrative.

“When people say that the United States is ‘better than this,’ it tells me that they have a sense of self and nation that is not grounded in history or current realities. They are willfully ignoring that this is colonized land, land where generations of African people were enslaved and land where people continue to suffer under the heels of capitalism, patriarchy, anti-Blackness and white supremacy,” Carruthers says. “This is not the problem of individuals who are just mis- or underinformed; it’s symptomatic of how the majority of people in this country are educated to believe that this place is the center of morality, the center of innovation, and really the center of the world.” In a 1962 essay in the New Yorker, Baldwin wrote that Americans are “controlled here by our confusion, far more than we know, and the American dream has therefore become something much more closely resembling a nightmare, on the private, domestic, and international levels. Privately, we cannot stand our lives and dare not examine them; domestically, we take no responsibility for (and no pride in) what goes on in our country; and, internationally, for many millions of people, we are an unmitigated disaster.”

Whiteness and democracy cannot coexist. We cannot reform or repair something that is functioning exactly as intended.

Little has changed in the 59 years since Baldwin evaluated American values and ideals: In the 2020 presidential election, more than 45 percent of Americans voted to re-elect a man who is unrepentantly racist, sexist, homophobic, and xenophobic, which means that nearly half of this nation voted to uphold the white, hetero, and capitalist patriarchy that not only endangers the lives of Americans, but also endangers the lives of those living outside this country’s borders. Kirsten West Savali, a movement journalist and senior director of content at iOne Digital, has followed and chronicled mass demonstrations in the United States, so she knows that “this isn’t America” is simply the “the liberal version of ‘Make America Great Again’ because ‘freedom and justice for all’ has never been this nation’s reality. We know this,” Savali said. “The United States is a white settler-colonial project rooted in violent anti-Blackness. So what happened at the Capitol—including the support and participation of police officers and lawmakers—is only surprising to those who have consistently fallen for or perpetuated the lies this nation has consistently told about its character.”

In the aftermath of this insurgency, I owe it to Rosa Maude, to my mother, to myself, and to my daughter to hold a mirror to the faces of the Americans who believe that the attempted coup on January 6 was but a small stain on the grand fabric this country is made of. What happened that day is exactly what America is, and it is exactly what America will continue to be unless we begin to see this nation through the eyes of its least protected citizens and vow to fix what is broken. The United States cannot grow up until Americans check the privileges that allow them to revel in its supposed progress and refuse to acknowledge its viscous inhumanity. “Now, more than ever, it is imperative that we (those of us who believe in freedom) disrupt the narrative that the United States is better than this. No, it is not,” Savali said. “Whiteness and democracy cannot coexist. We cannot reform or repair something that is functioning exactly as intended. We must build something new—and we are. That’s why they’re frothing at the mouth. We’re witnessing the death throes of an empire.”

Read this Next: Of Course the Police Allowed White People to Stage a Coup 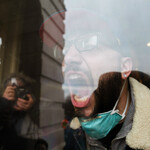