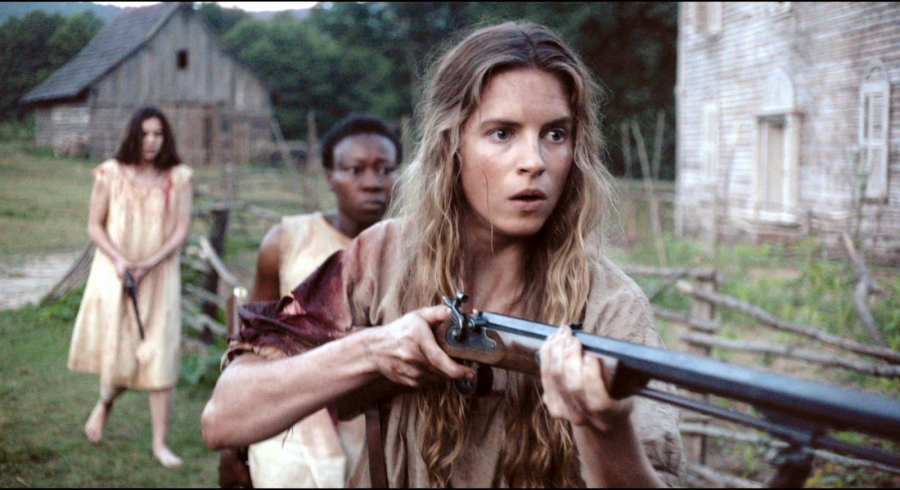 The Keeping Room is a new thriller set in the South at the end of the Civil War. But the heroes and villains are different than most Civil War-era films.

The bad guys here are two Union soldiers, Moses and Henry (played by Sam Worthington and Kyle Soller). These soldiers like to hurt women. The heroes are three women who have to defend themselves when the soldiers find their way to the rural farm where the women live alone. On the largest level, The Keeping Room is a film about what war does to people, how it leaves some people vulnerable and other people with seemingly unstoppable drives for violence. On a smaller scale, it is about the particular ways men use sexual violence to terrorize women. Even as the threat of rape impacts most women, The Keeping Room explores how that reality about is different for Black and white women.

The heroines of The Keeping Room are two white sisters, Augusta (played by Brit Marling) and Louise (played by Hailee Steinfeld), and an enslaved woman, Mad (played by Muna Otaru). They are living in near isolation, their days spent trying to get by on their small Southern farm. They till the fields, Mad makes stew, Augusta chops wood, Louise sits around. Louise is often rude or downright vicious to Mad, and Augusta tries to soothe the tension between the two, telling her sister not to speak so nastily. At the end of each night, the three women leave the keeping room, which is the kitchen building separated from the main house where the women spend much of their time. Augusta, armed with a rifle and a lantern, leads them into the house, which is empty of almost all furniture, practically a shell. They go upstairs, lock themselves into a bedroom, undress, and Mad gets into her bed and the sisters into their shared one. Then they do it all again the next day. On their rural land, they are cut off from everything, including the war itself. At one point, Augusta says to Mad with all sincerity, “What if all the men killed all the other men? What if it’s the end of the world and we the last ones left?” Little do they know the war has all but ended the Union’s General Sherman and his army are headed straight toward them. 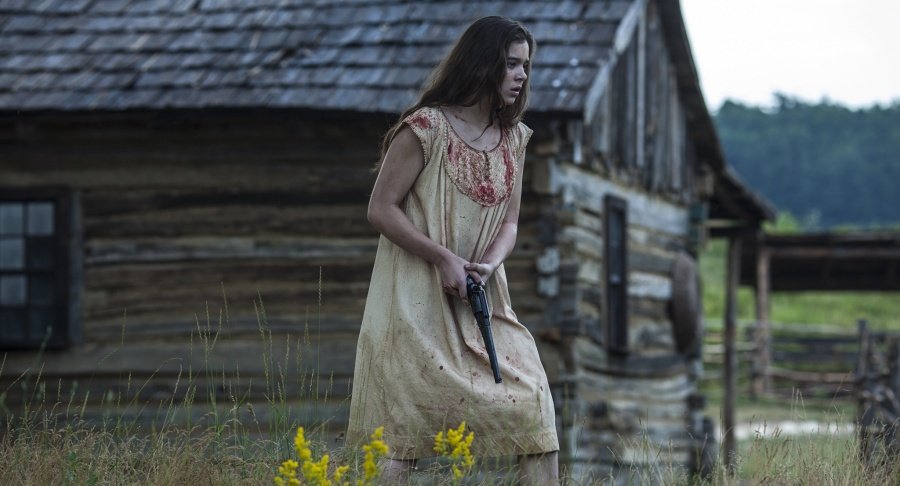 The movie takes off when Louise is bitten by a raccoon and Augusta goes for medicine. At a saloon/brothel, she meets the Union soldiers, Moses and Henry. An opening scene in the movie has already shown these men to be rapists and murderers, so there is no confusion over who the villains of this story are. They let Augusta leave and then follow her, setting up a tense and violent narrative. When Augusta asks Moses why he let her leave the saloon at all, he says ominously, “I wanted to keep you for a while.” That line is a nod to both his own idea of his entitlement to her and the brevity forced on the situation: Once General Sherman’s army arrives in a few days, the two soldiers will have to move on, so they only have a short time to try and “keep” the women.

Even as this movie is about what these men intend to do to these women, it is mostly about the women themselves and their relationships as they fight for survival, first from being left behind by all the men who went off to war and then from the men who try to hunt them down. Julia Hart, who wrote the script, says she wanted the story to focus on the women adapting to their new reality. “You have the residue of this structure they've all been conditioned under and it's literally crumbling around them,” Hart told me. “By the end of the film, they become a family.” Muna Otaru, who plays Mad, says it succinctly: “I always saw The Keeping Room as a love story between the three women.”

This is complicated, of course, by the fact that the three women are separated by their race and legal status. Hart set the story during the Civil War specifically “in order to best demonstrate the destructiveness of the war and what it does to men and women. You have to subvert the classic hero and the classic villain.” To make the Union soldiers the bad guys and the good guys Southern women pushes on our ideas of “good” and “bad,” and shows how easily war breaks down those ideas for those who actually live through it.

Given what we know about the role white women played in upholding slavery, it can be hard to see Augustus and Louise held up as heroines, even as they are infused with nuance and flaws. Hart said that her original script called for the opening scene to include a plantation farm that was meant to evoke the Gone With the Wind house burned to the ground. “I literally wanted Scarlett O'Hara to be blown away in the first scene of the movie,” says Hart. “This is not about her, this is not about her world.” But because they filmed in Romania, that was not possible and the scene was rewritten. “I did not want to glorify the white Southern woman,” Hart says. “I wanted to make her real.”

Yet this movie is about the beginning of the end of the system of slavery. When Louise is bitten by the raccoon, she screams loudly and Augusta and Mad come running. Augusta immediately blames Mad for what has happened, saying Louise was supposed to be with Mad, not off on her own. When Mad defends herself and says that Louise needs to be taught responsibility, Augusta turns around and slaps Mad across the face. Mad looks down for a moment, her chest puffing with anger. Then she raises her eyes, looks right at Augusta, and slaps her back, drawing blood. Augusta realizes there is nothing she can do and after a pause, she wipes the blood from her nose, and turns back to tending to her sister. 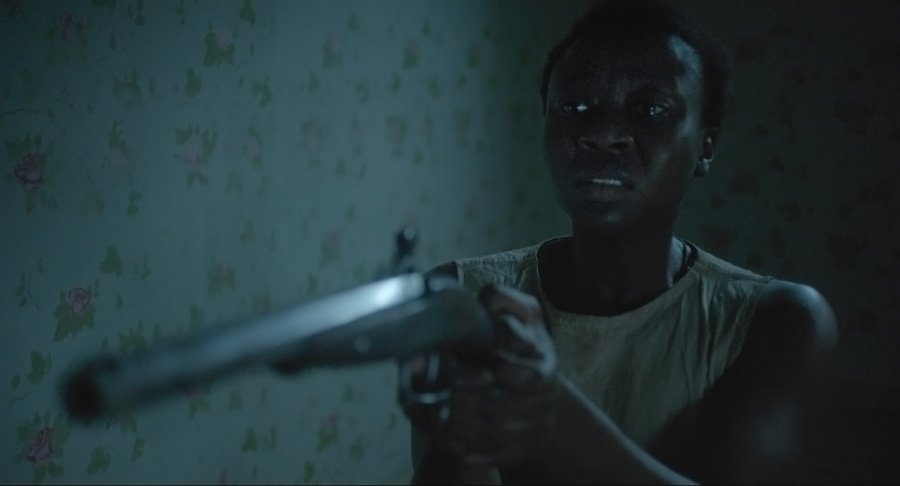 Otaru says to prepare for playing Mad, she listened to narratives that former enslaved people recorded through the Library of Congress. “Former slaves had been interviewed and I just listened to them everyday. Because I had to remind myself that I was playing human beings that had been enslaved with their own identities, their own personalities,” says Otaru. At the same time, she was playing an enslaved woman at a specific moment in history. “The big thing about Mad was [she was] a woman who has been muzzled by slavery and is now trying to deal with the blurring hierarchy that is going on between these women.” The slap scene, Otaru says, is important because Mad has “been oppressed for so long, not quite knowing where she fit in. It all had to be led by how the sisters wanted to treat her at every moment. At that moment, she'd had it. It was her breaking point.”

From there on out, the relationship between the three shifts. Mad helps nurse Louise back to health, Augusta and Mad share some liquor and a conversation about love, and when the soldiers appear, the three women rely on each other to make it through the night.  At one moment, easily the most powerful in the film, Mad tells the two other women her story of the sexual violence she experienced under slavery. At the end of Mad’s monologue, she looks at Louise, tears running down her cheeks, and says, “There are many kinds of monsters in this world, you never know which one is going to be yours.”

Hart says she had to fight for that monologue. “It's a really odd place to put a monologue in a thriller. We are in the midst of all this action, you can't really slow it down.” But she was adamant that it had to remain. “To me, Mad pours the moonshine on Augusta's gunshot wound and then heals Louise with that story. That is the way in which women heal each other by speaking and emotionally connecting and that common horror, somehow, heals the wound a little bit knowing you are going to get through this and you are not alone.” Yet Mad’s story is not simply that she, too, had experienced sexual violence. It’s about how, as enslaved woman in the antebellum South, she had experienced sexual violence over and over again to her, that it resulted in pregnancies, abortions, and children she never knew. “The scene is incredibly important to me,” Hart says, “that Mad tell this young girl, who's been pretty horrible to her, that they are now—not the same, but they've been through something similar. This happened to you this one night, this is my whole life. That's the difference between the two of us.”

Earlier this year, New Yorker critic Emily Nussbaum, in a review of Netflix show Unbreakable Kimmy Schmidt (which could not be more polar opposite to The Keeping Room in terms of content or tone), wrote, “When women’s lives are taken seriously, sexual violence is going to be part of the drama.” And it appears that we are having a cultural moment where we are taking women’s lives seriously, which means we are seeing sexual violence depicted on screen and are having robust conversations about those depictions.

The Keeping Room is yet another good example of this. This is a thriller about real-life horror with monsters in the shape of men. But the women are the heroines here. They endure. Yet the film concludes on a note acknowledging that whatever happens to these individual women, war goes on. Sexual violence will continue. The monsters are not vanquished even as The Keeping Room ends.

Watch the trailer for The Keeping Room:

THE KEEPING ROOM [Trailer] In theaters this fall! from Drafthouse Films on Vimeo.