Clinton (“Too Shrill”) is among the ten celebrity women Petersen considers in her exploration of how overstepping particular boundaries—of size, strength, age, ambition, and more—has marked, and defined, and circumscribed their lives. Serena Williams (“Too Strong”), in ascending to the highest echelon of athletic mastery, has been insulted, racially and sexually demeaned and objectified, even compared to a horse. Madonna (“Too Old”), in daring to attenuate her career—as her male counterparts have always done—has become more vampire than vamp, feeding on pop music’s youth in a quest to prolong her own. Caitlyn Jenner (“Too Queer”), by transitioning in public, has drawn criticism from around the cultural panopticon, whether for perpetuating media-friendly transnormativity or for failing to conform to a romance arc on her reality show.

In exploring how any ambient space around female celebrities is quickly overfilled with criticism and condemnation, Petersen primarily focuses on the unforgiving celebrity media culture, with its unyielding gaze and greed for clicks. Like Sady Doyle’s Trainwreck, Too Fat, Too Slutty, Too Loud fleshes out a paradox wherein “unruly” women—whether by talent, volume, or simply visibility—can challenge us to transcend the societal bounds of what women should do and be, and scare us away from emulating her as we see how others recoil. Linking contemporary celebrity media and feminist theory with ease, Petersen writes with equal amounts of rigor and empathy that, given some of her subjects, won’t sit well with all readers. (When was the last time you read a defense of Lena Dunham?) But as we feel the sting of feminist backlash once again, her point feels like a warning bell: Our cultural lens on celebrity women reflects back on women en masse. We don’t have to love their unruliness, but we need to change the attitudes that so narrowly define them. 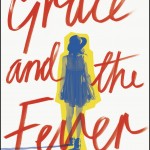 by Anna Dorn
Grace and the Fever follows high school senior Grace Thomas as she meets Jes, a member of her beloved Fever Dream.