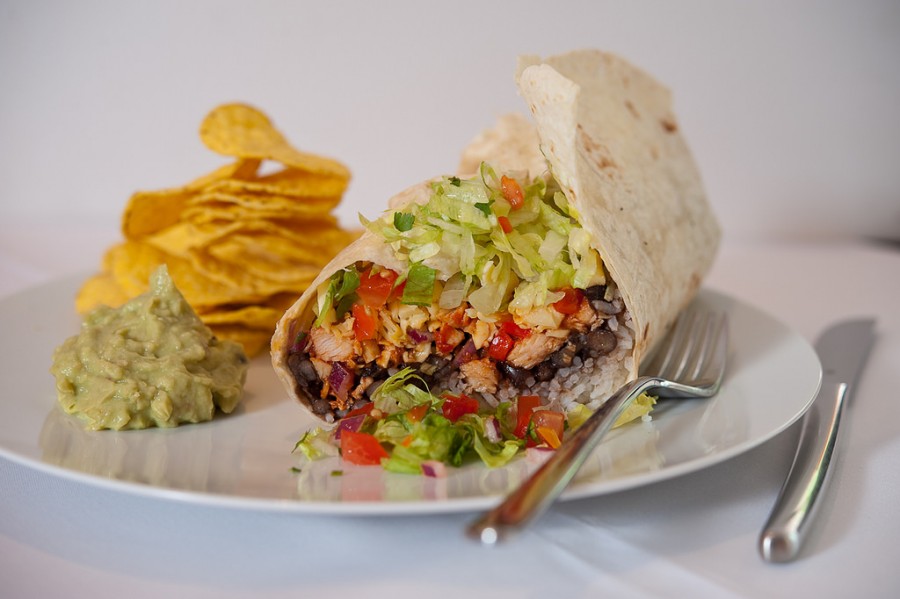 This story was originally published on June 2, 2017.

When Portland’s Willamette Week first published their interview with the owners of Kooks Burritos, they had no idea that it would become an international story within nine days. The piece told the story of two American, non-Mexican women who took an impulsive trip to Baja California. On this trip, Kali Wilgus and Liz Connelly became “enamored with” the handmade tortillas made by women of Puerto Nuevo, Mexico. Wilgus and Connelly told Willamette Week that they wondered how the women made their craft look so easy, so they peeked into the restaurant’s windows after the women hesitated  to tell them their technique.

These women were living out a daydream: moving their office somewhere new and exciting; going from a record-breaking rainy Portland to a sunny beach; and tasting freshly made food. They wanted to keep a piece of that experience with them, so they decided to commemorate it by trying to make tortillas at home, and eventually, selling burritos with those handmade tortillas out of a food truck.

The “adventure narrative” is already successful in food culture (see restaurants like Pok Pok and everything Anthony Bourdain does). The storyline often follows a basic pattern: The chef has a cultural experience, and patrons get to taste a new version of the inspiration. It’s a story that sells.

After the Willamette Week interview, people became vocal on social media and Yelp. Within three days of the article’s publishing, Willamette Week tweeted a short and sweet update: 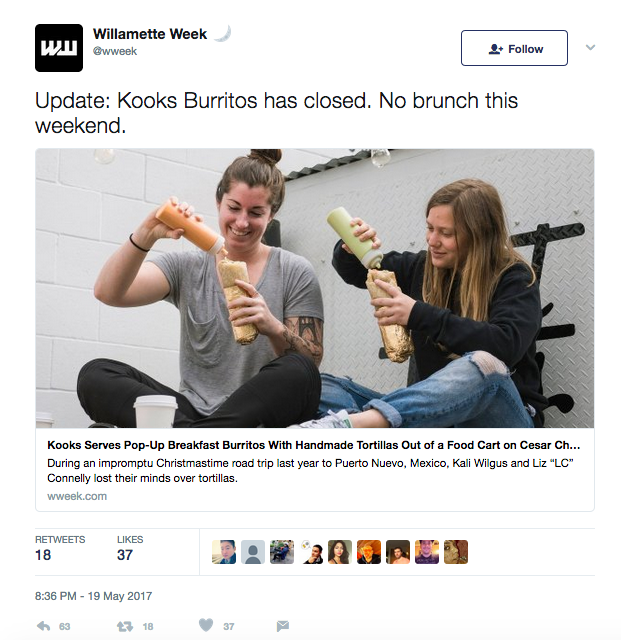 Immigrants and their children understand that in order to assimilate, you have to speak English really well and know how to eat American food. You have to keep the Brown stuff at home. You have to blend in. That requires silencing part of the self until it’s allowed to be expressed. Often, people of color are allowed to perform Brownness only when it can benefit white people. In fact, it’s because of this that many second and third generation Latinx immigrants often lose their Spanish.

Most people of color know the feeling of covert—or casual—cultural appropriation. It’s similar to being unexpectedly elbowed in the chest. It’s someone saying you shouldn’t tell a certain joke because it’s too awkward, and then they turn around and tell your joke, get a big laugh, and get all the credit. It’s why some people of color create safe spaces where it’s okay to perform Brownness without an exploitative or judgmental white gaze.

In just over a week, the Kooks story went international. Yet, mainstream media outlets were still not seeking out stories from the women of Puerto Nuevo, or the Latinx folks who serve burritos as means for survival. Most media forgot that Mexicans are people who have voices: One article about Kooks even stated that Wilgus and Connelly stole recipes from “Mexico.” Mexicans are so regularly dehumanized that nobody thought to ask actual Mexican people how they feel about the co-opting of Mexican culture.

Willamette Week followed up their interview with a piece written by a light skinned Indigenous woman titled “My Dad Is From Mexico. I Can’t Get Mad At Kooks Burritos.” This article offers one view that enables people to ignore the criticism about the food cart—as if one exculpatory Chicana voice is enough to fill the diversity quota.

There are so many different people under the umbrella of Mexican American: there are Native Latinxs, Afro Latinxs, and white Latinxs. There are affluent, poor, and working-class Mexican Americans. There are documented and undocumented people. There are Chican@s, Meztizxs, and members of federally recognized tribes. Because there are so many different identities under the umbrella term “Mexican,” there are many different opinions about our issues among Mexican and Mexican American people. Mexicans are not a monolith. Talking to one Mexican person is never enough to understand the complexity of our issues. There’s a name for finding one member of a minority group who agrees with you and asking them to speak for all of their people: tokenizing.

This took place in the whitest city in America, but of course there are Mexicans in Portland, too: A recent report found that “Oregon’s Latino population is growing faster than the nationwide average.” On She Goes recently published “6 Latinx-Owned Restaurants in Portland You Need to Visit,” and Racist Sandwich published a PDX POC-owned food directory that includes Latinx-owned businesses.

It’s an example of oppressed people being denied the opportunity to control their own narrative, which they should be entitled to speak on exclusively. Mexican culture—especially food—is boiled down, removed from context, and commodified. The people behind the culture are removed.

Mexicans are more than an exploitable culture and motivational success stories. In fact, due to the lack of support for immigrants, more Mexicans are leaving the U.S. than arriving. For undocumented folks, living in ICE detention centers is like living in a prison, even for nonviolent (a.k.a the majority of) detainees. Documented and U.S.-born Latinxs still have the highest high school dropout rates and lowest college completion rates due to several added barriers, including more responsibility at home.

The stories less told are those of the Brown folks working in the kitchen and contributing to the fantasy. They might even play a key role in delivering the fantasy, as they give it the authentic feel. What do they get in return? They get minimum wage, maybe tips. What’s “just a recipe” to a white person with institutional power is the only chance to survive for some Mexican folks. Americans give themselves worldly credit for buying from the tamale lady, even if they refuse to learn her name.

Unlearning internalized structural oppression is hard. It requires admitting that something is wrong, that you need to listen, and that you’re contributing to it without meaning to. Unfortunately, when people start undoing oppressive underlying beliefs, they may indulge in performative allyship (or ally theater). This is an effort to save face. Think of it as your subconscious PR representative who wants to make sure your reputation isn’t suffering after a big mistake.

Because we live in a white-centric society, when white folks speak up on racial issues, they often receive praise for being thoughtful, or are seen as a humanitarian—something that happened all over comment sections in articles about Kooks. This praise derails from the point and centers the thoughtful white person. It doesn’t in any way challenge folks in the room to critically examine the problem. When these (often self-declared) allies—whose behavior and “ally” identity has been reinforced by other white people—talk to people of color who point out that they’re not actually helping, they often exhibit white fragility.

We live in a system that coddles white folks (even white supremacy requires people of color to coddle white feelings), so when people of color point out that white folks need to do more if they intend to actually help, the white “ally” ends up feeling hurt, sometimes even playing the victim. They may even feel like their impact is unrecognized. They might even get defensive and gaslight the person who called them out. This is centering themselves and not the issue they speak about—which is proof that they haven’t done the work to truly care about the issue (and may be exploiting it for social capital or “activist cred”). As a last defense, a white person being called out will call upon their relationships to people of color. Not only is this tokenizing their friends of color, it is also leaning on their (real or perceived) proximity to people of color in order to deflect blame. The Kooks scandal that later became known as #burritogate was a minefield of people at each stage: performative allyship, people centering themselves, white fragility, gaslighting, tokenization, and calling upon perceived proximity to people of color (especially Mexicans).

One of the easiest ways to demonstrate allyship is by supporting Mexican-owned Mexican restaurants. Do your research: give places a quick Google search to learn about who owns them before you support them, and don’t support appropriative businesses. True allyship requires folks to develop an understanding of when to yield the floor. In the case of #burritogate, people were focused on amplifying Mexican voices only if they could cite a Mexican whose views matched their own. Instead of speaking on behalf of Mexicans, surrender your time (or redirect your audience) to Mexican voices. Being an ally means knowing you’re probably wrong, being uncomfortable, shutting up, and doing the work to learn. Let Mexicans speak for ourselves, listen to what we say in case you need to represent us when we’re not there, and use your social power to encourage other white folks to do the same. If white people can learn to stop taking up all the space, Mexicans and other people of color will finally be able to speak up on our issues. Right now, we’re tired of being pushed aside, and white folks are missing out on an opportunity to actually learn about our culture. 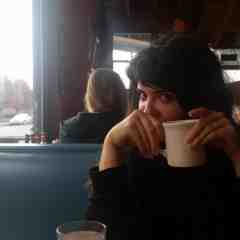 M.L. Moreno is a SoCal born Chingonx. They enjoy working with kids, and being creeped out by accurate astrology readings and fortunes. Their favorite animal is the snail.

I've been spending entirely too much time defending myself lately for not feeing sorry that these women went out of business. They stole the technique and never gave anyone any credit. I'm not crying because they failed to recognize where they went wrong. White America does not get to revel in my culture (I'm first generation Mexican American), my traditions, my food, my holidays and then dispose of and disrespect the people who made all of that possible. Not anymore. Great piece. Thanks for writing this.

And yet there's a restaurant chain called "Illegal Pete's" in Colorado and Arizona that serves tacos, and they haven't been run out of town. Sure, there was a bit of an uproar when they first opened, but they haven't faced the same kind of wide spread criticism that this Portland food cart has. Illegal Pete's is still in business, and thriving. The name of that restaurant, which the owner claims was not meant to be racist in any way and is somehow a nod to his 'hellraiser' dad, is wildly insensitive to the immigrant community. It only makes it worse that they serve Mexican food at Illegal Pete's. Why is one still in business and the other shamed and practically burned at the stake for doing essentially the same thing?

Preach. This is everything, "When these (often self-declared) allies—whose behavior and “ally” identity has been reinforced by other white people—talk to people of color who point out that they’re not actually helping, they often exhibit white fragility."
P R E A C H.

I totally agree about the two Anglo women making their own burrito shop being dumb (I'm a Chicana from the border region). I slightly disagree with the characterization of Anthony Boursin being an appropriator. If anything I think his show is extremely respectful of the culture with him meeting up with locals (from a variety of backgrounds from the working class to culture academics and bloggers) and he patronizes local restaurants. He goes into the nitty gritty of their history to provide context to their food and way of life. If anything I think his show is more a self contained documentary on the modern history of the country with food as the icebreaker. 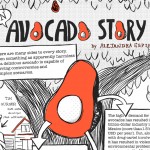 by Alejandra Espino
We all know avocados are delicious, but there are many complexities involved in their overconsumption.