Marginalization at the Women's March and Beyond | Bitch Media

Body PoliticMarginalization at the Women's March and Beyond 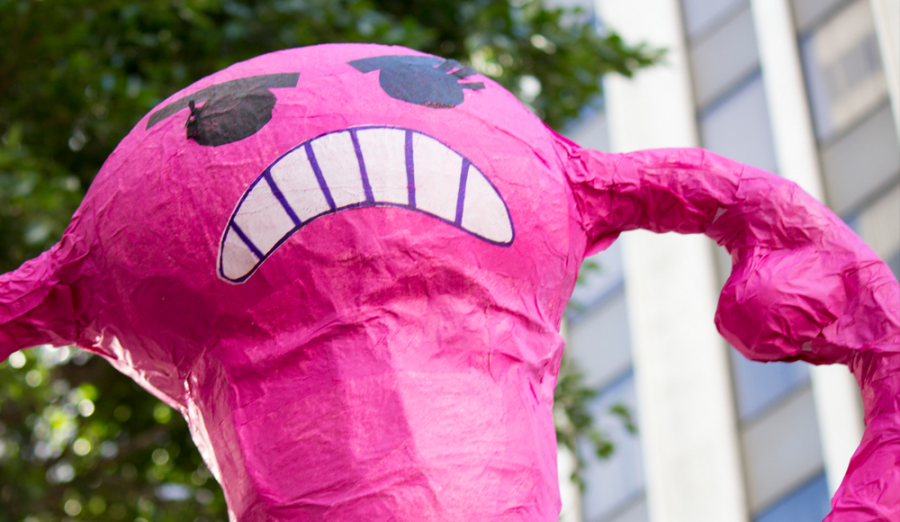 “The pink hats look great!” the emcee said and smiled, and the crowd around me cheered.

I was standing in Northampton’s Pulaski Park and was surrounded by other marchers who’d gathered from all around Western Massachusetts to condemn President Trump’s antiwoman administration. It was a well-attended assembly with several inspiring speakers, including Diana Sierra of the Pioneer Valley Workers Center, who spoke passionately for direct, radical feminist action and called out Obama for his record on deportations. Looking around, I saw Black Lives Matter signs, and I saw fat queer femmes of color celebrating their own existences. Northampton’s first female mayor, Mary Ford, was on hand to encourage sit-ins and personal accountability in leftist activism.

But as a woman without a pussy, I felt adrift in the sea of hats. My glances about showed me other, less welcoming messages: “This Pussy Grabs Back” painted over a detailed line drawing of a vagina; “Period Blood” written on cardboard and taped to a marcher’s back; a 3D vagina sculpture with teeth. Mine was one of only three signs referencing trans issues in a sea of genital-obsessed rhetoric. It made me wonder how many of those present were as concerned about my issues as I was about theirs.

That’s a question many trans people, with and without vaginas, found themselves wondering after the Women’s March in Washington D.C. and its satellite Sister Marches around the globe. I spoke to a nonbinary person, also named Sam, who took part in the St. Paul march. He told me he’d brought a sign bearing the slogans “Trans Folks Against Trump” and “Trans Rights = Women’s Rights.” During the march, Sam was approached by cisgender women who told him he was being divisive. “Put your sign away,” they said. “This is a women’s march, not a pride parade.”

“Combined with so many signs with uteri and fallopian tubes and jokes about small penises, I felt scared and erased,” Sam told me. “I worried how many more people around me agreed that I shouldn’t be there.”

This isn’t a new feeling for non-cisgender people who exist in leftist spaces. As Katelyn Burns notes on The Establishment, Janice Raymond and Mary Daly’s work on Raymond’s 1979 book The Transsexual Empire inspired more than 40 years of trans-exlusionary (or “gender critical”) feminism, adherents to which hold fast to their beliefs that trans women are merely men invading women’s spaces and bodies—and trans men are just confused butch lesbians. These ideas quickly seeped into mainstream feminism and poison otherwise progressive minds to this day.

Feminists whose conception of gender is based on biology also ignore millions of intersex people, many of whom have been forced into nonconsensual surgeries for untold decades to better fit the male/female binary. Yet instead of building bridges with the intersex community, the marches’ iconography only served to further alienate an oft-forgotten population. Of course, much of this stems from simple ignorance rather than malice—but it’s difficult to separate the two, and regardless of intent, the results are still injurious.

Trans and intersex people weren’t the only ones othered and pushed toward the margins—explicitly or implicitly—by the marches’ overwhelmingly white, cisgender attendees. In a Twitter thread retweeted more than 9,000 times, indigenous activist Sydne Rain shared her experience of being “treated as a guest on our own ancestral lands.” Black and brown feminists expressed concerns over the quiet white supremacy reflected in the pink pussy hats  and wondered if the white women taking selfies with police officers would protect people of color if they were attacked by the cops tomorrow. Sex workers and disabled women spent the weeks leading up to the marches loudly calling for their rights to be included in the organizers’ platform, with disappointing results.

These were legitimate criticisms leveled at one of the largest women-centric political actions in recent memory, but for most of the marchers, it seemed as though any critique was too much. “Positivity” was the keyword of the day, and any woman who had a problem with her sisters was told in no uncertain terms to stick a sock in it. Unity was the most important thing.

Here’s the thing about unity, though: it cannot be demanded. It must be constructed with care. Setting aside differences is vital to building a strong coalition, to be sure, and we as feminists cannot hope to be successful in our actions against this administration if we continue to squabble over every perceived slight. But these problems with white feminism are pervasive and deeply troubling to many people, and there are difficult conversations that must be had.

So let’s start now. In the wake of trans objections to cisgender vagina-centric rhetoric, Crunk Feminist Collective cofounder Brittany C. Cooper wrote an insightful essay on her hesitation to decentralize Black vaginas from feminist activism. While acknowledging the horrific burden of violence trans women of color face, Cooper notes that “[d]iminished brutality can be called neither safety nor privilege,” reminding us that Black vaginas have been both commodified and criminalized since the days of plantations. She also points out that “[i]f trans women’s experiences with sexual assault were part of the official record [combined with statistics on cis women], I think we would be picking our faces up off the floor at the numbers.” Cooper cuts to the core of the matter: Any aspect of a person that can be tentatively related to “womanhood” by the culture at large—genitalia, feminine presentation, secondary sex characteristics, etc.—are or have been criminalized or attacked through the centuries. Those of us who aren’t cisgender men all face this adversity in our own unique ways.

Taken all together, Cooper’s message lines up with Sam’s sign: “Trans Rights = Women’s Rights.” There are details that separate our experiences, but we have common goals and common adversaries. The difficulty in achieving those goals comes when one group demands that the other ignore their own needs for their sake. For one thing, it’s impossible—transmasculine people are involved by necessity in trying to protect rights for people with vaginas and uteri, transfeminine people are keenly invested in women’s equality in the workplace, and so on. Our feminism is intersectional because our needs are as well. Willfully oversimplifying the issues we face puts us at risk of repeating the erasures and abuses of the past, and that’s something we can’t afford.

But more importantly, stifling internal debate is a surefire way to destroy the burgeoning unity some marchers experienced this weekend. Instead of asking people with concerns to slap on a fake smile for the press, we should look for ways to expand our movement in some areas and narrow its focus in others. For instance, Trump’s determination to continue construction on the Dakota Access Pipeline means white women must take direct, material action to protect Native bodies and lands. More broadly, we need to come together and form intercommunity support systems for people of all identities and backgrounds who are about to lose their healthcare. Both of these will require listening to criticism that may be uncomfortable, but that criticism is absolutely necessary for understanding the needs of others.

In short, unity is a two-way street. So far, inexperienced white cis feminists have taken up both lanes, assuring that anyone walking a different direction will assimilate into the throng. What’s needed now is a movement that can get out of its own way, receiving and internalizing criticism in order to grow. That’s the kind of movement I want to be a part of, because it’s one that can win—for all of us.

I felt excluded by the pussy hats because what they represented had become the movement’s mascot, and it didn’t include me. But when I show up to march in protest of the newly reinstated abortion gag order, I’ll be happy to wear one, because I recognize the importance of what it represents: a collective effort to liberate many different gender expressions and identities who have been oppressed because of their bodies. It remains to be seen whether I can expect my fellow marchers to return the favor. For the sake of our future and our freedom, I dearly hope I can.