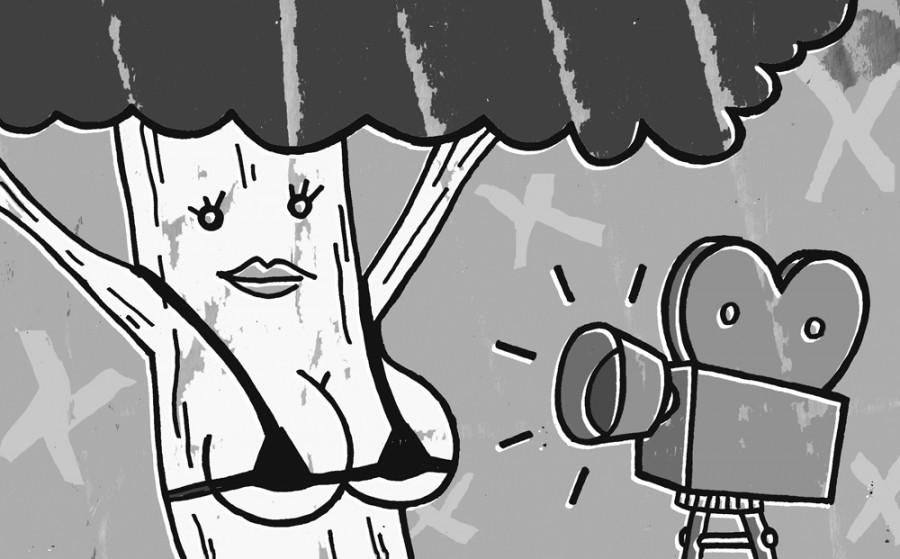 Fuck for Forest talks a good, if somewhat garbled, game. The site's front page contains a warning that the project

Whether or not Fuck for Forest can truly be said to be reclaiming sexuality, they've put their money where their mouths (among other orifices) are. In a 2004 article in Grist magazine, the Norwegian activist couple behind the site, Leona Johansson and Tommy Hol Ellingsen, claimed that the project had raised $50,000 so far. A lot of that money rolled in after the duo climbed onstage at a rock festival that year and had sex in front of several thousand people, directing major traffic to the site. The two seem sincere about their desire to save the world through sex, and they are befuddled by the mainstream environmental world's reluctance to take their money. "Society is so upside down," Ellingson told Grist writer Lissa Harris. "In Norway, we have this prime minister talking about war and defending it, and at the same time putting sex down as something bad. Any kind of action to help nature is good."

Can sex save the planet, as Fuck for Forest's idealistic founders suggest? Or is it more likely that environmental activists are so frustrated by both a seemingly complacent world populace and their reputation as freaky fringe dwellers that they're willing to do anything (or anyone) to bring attention to the cause? Whether this sex-for-green concept seems brilliant or boring to you, it's a simple extension of the fact that sex—and, in particular, a sexualized woman—sells. And though what it usually sells is something easy (beer, say), using sexually charged images of women is emerging as the chief tactic for environment-related groups in search of a commercial push.

The best-known example of this phenomenon is PETA's notorious, long-running ad campaigns promoting animal rights and rallying against animal testing and eating meat. When PETA hoists a billboard or slaps up a glossy poster featuring a woman, you can bet she's unclothed or close to it. In an ad campaign targeting the Iams ­pet-food company for their animal-testing practices, sad-sack rocker Morrissey lounges with two pooches, fully dressed. For the same campaign, spokesmodel and internet pinup Cindy Margolis wears a silver bikini and clutches a small dog. The ad's tagline? "Iams isn't my doggy's style." Elsewhere, a campaign promoting vegetarianism features the likes of Elizabeth "Showgirls" Berkley and Pamela Anderson dressed in lettuce-leaf bikinis and other scanty coverings made of salad fixings; the male rapper Common, however, appears with his shirt firmly on, holding a veggie burger.

In 2005, the environmental group Forest Ethics followed PETA's lead. Their target: Victoria's Secret, whose relentless effort to provide every American household with a lingerie catalogue has led to clearcutting and exploitation of virgin forests. To kick off the media campaign, called Victoria's Dirty Secret, the group placed an ad in the New York Times featuring a model wearing a garter belt, corset, Victoria's Secret's trademark angel wings—and a chainsaw. "Some companies get a tree for Christmas," the ad announced. "Victoria's Secret is taking a whole forest." The campaign garnered coverage in the Wall Street Journal, Time, and the Seattle Post-Intelligencer, among other places.

On the initiative's website, the same angel-with-a-chainsaw appears. One banner on the site declares "Victoria bares it all! Exclusive photos!" and sports a little quadrant of an angel-winged model—just her right breast, hair, arm, and wing. When clicked, this banner takes you to a picture of a clearcut—a brutal-looking piece of land that used to be a forest and is now a spiky field covered with stumps—with the tag "Victoria's Secret Holiday Clearance."

On the website CampusProgress.org, writer Desirina Boskovich describes a presentation given by Forest Ethics at Emory University, at which the speaker showed off Victoria's Dirty Secret ads and a video of a protest. Describing the video, which captures a protest in front of a Victoria's Secret store in a mall, Boskovich notes, tongue somewhat in cheek, that "one female protester, dressed above the waist in only a bra and a huge sign, is catching the most eyes. People stop to talk to her, either about her sign or why she's not wearing a shirt."

These lingerie-clad female protesters are young and good-looking, all the better to attract otherwise disengaged mallgoers who might stroll on by your average Birkenstocked, frizzy-haired, old-guard environmentalist. And that's precisely the point of this new face of advocacy. Likewise, Fuck for Forest's vision of revolutionary sex doesn't stray far from conventional porn images. The teaser models sprinkled around the site (most of them women) are thin and conventionally pretty, save for a pierced nose here and some dreadlocks there. When men appear, they are exclusively depicted in sex scenes with women, in keeping with the site's emphasis on pleasing the tastes of heterosexual visitors. The main page sports a photo illustration of a naked girl crouching in a forest, blindfolded with a sort of bag over her face, while a hand holding a chainsaw advances from stage right. (Sexy women in close proximity to chainsaws must be a growing fetish.)

PETA's ads, the Victoria's Dirty Secret campaign, and Fuck for Forest share one crucial feature: The images they use to sell their causes not only exploit the female body, but also reinforce and perpetuate ideas of female beauty that everyone who moves in progressive circles should, at this late date, recognize as less than progressive. To use a woman's polished, plucked body as an emblem of environmentalism seems to contradict everything else they might have to say about the importance of natural and respectful forms of living.

For the past 30 years, ecofeminism, a blending of the environmental and feminist movements, has been making the point that exploitation of women and exploitation of the earth are intertwined, fueled by many of the same destructive societal and cultural mind-sets. Which is not to say that ecofeminism and female nudity are incompatible—one longtime environmental activist named Dona Nieto regularly doffs her top while reading her goddess-themed poetry to confused loggers in California's redwood country, calling her performance "striptease for the trees."

In protests like Nieto's or those of Baring Witness, the California group whose members arrange their naked bodies into peace signs to protest war, the women involved are just ordinary people, albeit nude ones. They're not celebrities, or made up to look like Victoria's Secret models, or positioned in traditional porn tableaux, and they point out the crucial difference between a naked protest that counts on societal norms of female beauty for its dubious power, and a naked protest that explores the nature of femininity and its possible interconnectedness with the earth. Contrast Nieto's protest, for instance, with the recent Greenpeace action at a Vienna summit of the European Union, Latin America, and the Caribbean, which featured a guerrilla protest of pulp-mill pollution by the scantily clad Carnival Queen of Argentina. "I speak for our people and the nature around us. I am entirely qualified to demand to any head of state that they protect our environment," stated Evangelina Carrozzo of her remarks demanding that European mills stop polluting the Uruguay River. But why she needed to do so wearing only a bra and thong went unexplained.

I, along with others who question ecofeminism's essentializing of the Nature of Women, might reject any implication that females are more closely tied to the earth, but my discomfort with these types of protests is far removed from my virulent dislike of the other, more exploitative campaigns. But ecofeminism's contention that society uses women as resources just as it uses timber or oil or gold seems to hit a bit too close to home with this new environmentalism, which puts women's bodies to use in an extremely cynical way. We expect this treatment from the mainstream realm of advertising, but to get it from ostensibly progressive organizations feels like adding insult to injury.

It's entirely questionable whether the interest that's aroused by a Victoria's Dirty Secret protest in the mall or a Fuck for Forest video is really directed toward saving the environment. The kinds of sacrifices and changes in outlook that becoming a true environmentalist entail are not going to be brought about by a moment of lust for a sexy girl in a bustier, a strategically placed lettuce leaf, or nothing at all.

It's safe to say that the environmental movement as a whole isn't sliding downhill into some kind of woman-hating quagmire. GE's recent television ads feature an elephant dancing with joy to "Singin' in the Rain" at the mere mention of the corporate giant's Ecomagination campaign—but, thankfully, no buxom rainforest pinup as its companion in greenwashing. (The company's sexier bid for cleaner emissions does feature modelesque coal miners of both sexes, though.) Al Gore has managed to promote his recent documentary about climate change, An Inconvenient Truth, with nary a slice of activist cheesecake. And the World Wildlife Federation rejected a donation from Fuck for Forest, presumably because of its provenance. But the difference between these two arms of environmentalism—one entrenched and establishment; the other fiery and grassroots—points out the need for organizations that, like Fuck for Forest or Forest Ethics, have sharp instincts and creative thinking. But is saving the earth on the tits and asses of women the best idea we've got? For all of our sakes, I sure hope not.

Rebecca Onion lives in Austin, Tex., where most sexy environmentalists keep their shirts on—even in summer.

I find taking off my clothes for a cause liberating and fun. Not very feminist to try to tell other women to stay within certain boundaries and to attempt to limit how they are permitted to express themselves politically. People have been using the human form for protest since at least as far back as Lady Godiva and yet somehow it's still shocking and controversial. Amazing!

Essentially, this is a "do the ends justify the means" issue. I've never felt comfortable with porn, but I don't protest its existence, as I recognize that there are people who enjoy it. And if this is an organization made of "openly sexual people" who are not forced or exploited to create the content, I find myself having even less of a problem with it... provided that they are aware that perhaps not everyone receiving pleasure from the pornographic content remotely cares about their message. At least the desire to make a profit isn't coming from a deep-rooted evil to destroy the consumers (I'm thinking about you, pharmaceutical monsters).

"perpetuate ideas of female beauty that everyone who moves in progressive circles should, at this late date, recognize as less than progressive."

The Ecolo sexuality is H2S : "Hairy, Sweaty, Smelly" or "Hair To Stay" : http://poilagratter.over-blog.net

Relevant: Neither Slave Nor Pharaoh