by Amy Lam and Sarah Mirk 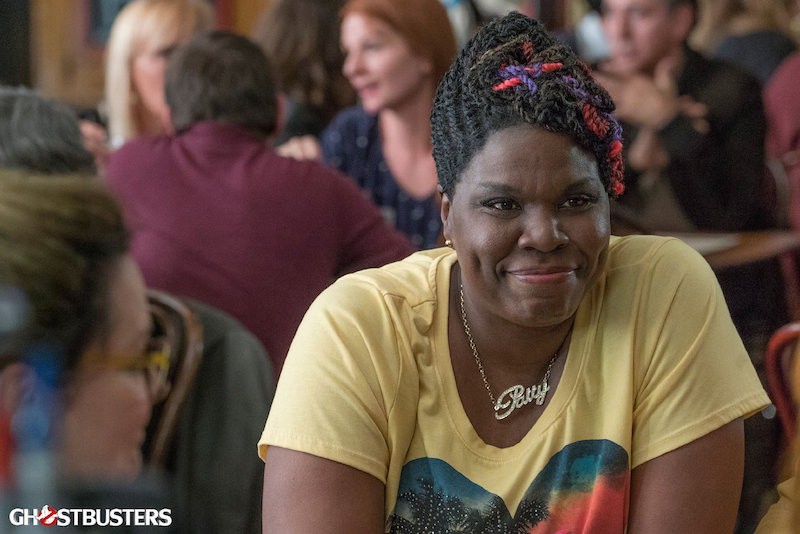 It should have been a joyous and exciting weekend for Leslie Jones, the Saturday Night Live cast member who is starring in Ghostbusters. The film opened Friday to big audiences and critical praise. But instead of being able to revel in the moment, Jones was being deluged with racist comments by Twitter trolls.

On Monday night, she announced that she was leaving Twitter, writing, “I leave Twitter tonight with tears and a very sad heart. All this cause I did a movie. You can hate the movie but the shit I got today…wrong.”

For months, trolls have harassed other people involved with Ghostbusters—they were immediately out in force when director Paul Feig announced that he was filming last summer, harassing Feig for daring to remake the classic film with an all-women cast. But the onslaught of racist and sexist hate that people directed at Jones is unparalleled compared to what other cast and crew members received. In an industry where Black women seldom land starring roles in major releases—a mere 10.8% of speaking roles go to Black characters—it’s demoralizing to see Jones targeted in this way when she should be celebrating instead.

In “GamerGate’s war against Ghostbusters and Leslie Jones,” writer Colby Klaus gathers some of the worst tweets directed at Jones, including her disheartened replies to the attacks (content warning for vile anti-Black racist misogyny). Jones had been dealing with the abuse proactively by blocking people who tweeted terrible things at her, reporting their accounts, and retweeting them to expose the hate speech showing up in her mentions. But the racist attacks escalated after the release of the film, when notorious Twitter troll Milo Yiannopoulos alerted his small army of followers that Jones had blocked him. Jones spent the next 24 hours facing a barrage of hatred—and trying to get Twitter to take action against the trolls. Despite Jones and others reporting the abusers, the attacks persisted. 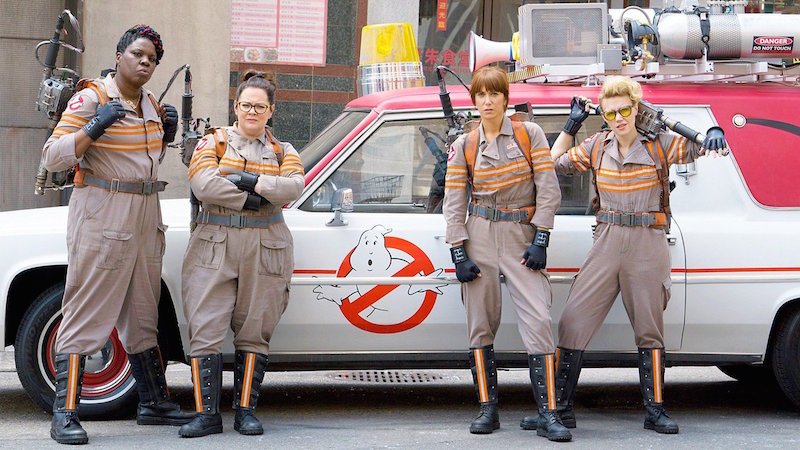 “The thing is, it’s not just about reporting, it’s about consequences,” writes Teresa Jusino at The Mary Sue about the attack on Jones. “What actual consequences do violators of Twitter’s abuse policies face? Especially when trolls like this often have multiple accounts? Clearly, whatever consequences are currently in place are… inconsequential.”

Sadly, this wasn’t the first time Jones was pushed to the point of quitting Twitter. Following the release of the film’s trailer this March, she tweeted about deleting her account amid that wave of hate. This week, she tweeted about how persistent and depressing racist vitriol is on this site and how Twitter does very little to shut down abusers:

“It’s so sad. Most of these comments sound like they are from ignorant children. ‘I’m the source of AIDS?!’ WTF!! These people hate themselves. You have to hate yourself to put out that type of hate. I mean, on my worst day I can’t think of this type of hate to put out. I don’t know how to feel. I’m numb. Actually numb. I see the words and pics and videos. Videos, y’all. Meaning people took time to spew hate.…Like no shame or compassion for human life. It scares the fuck out of me!”

Read this next: Why Gaming Culture Allows Abuse—And How We Can Stop It
Read this next: A New Website Helps Bystanders Support Victims of Online Abuse

The response to this kind of hatred is often a shoulder shrug. People suggest you “don’t read the comments” or just don’t use Twitter. But that’s completely missing the point. Twitter is a public space—not being on Twitter means not taking part in crucial conversations about pop culture, politics, and identity. The trolls who spread this kind of hatred are trying to make Jones feel like she doesn’t belong there—they’re trying to shut her down and drive her off the site. Twitter should work to protect people who are contributing to making the site a place for good discussion, not the “free speech” rights of people who are actively working to undermine and intimidate other users. The pattern of sexist, racist, homophobic abuse on Twitter has been documented for years. As reporter Terrell Jermaine Starr detailed in 2014:

“According to Working to Halt Online Abuse, a volunteer organization that has tracked online harassment since 2000, 70 percent of the more than 4,000 people who have filed online harassment cases are women. Online users with feminine usernames are particularly vulnerable to online attacks. In 2006, the University of Maryland conducted a study in which researchers created fake online accounts and entered them into chat rooms. An average of 100 threatening or sexually explicit messages were directed at users with feminine usernames each day; masculine usernames incurred a mere 3.7 in comparison.

In 2014, the group Women, Action, and the Media (WAM) undertook a study to see how Twitter deals with abuse. Over three weeks, WAM collected 811 reports of harassment on Twitter and passed along the 161 most serious situations to Twitter employees. Twitter wound up taking action on only 55 percent of those cases—most frequently, they suspended accounts temporarily. 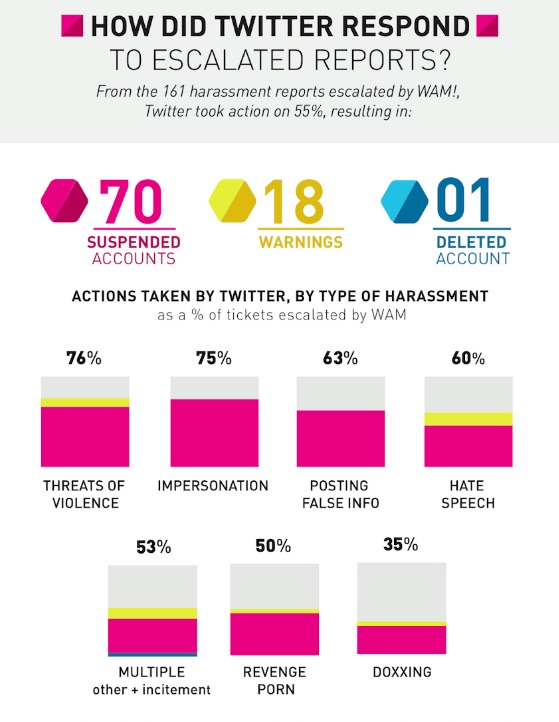 The problems with that low-action approach were seen clearly on Leslie Jones’s Twitter feed this week. Despite Jones’s high-profile status and the many people who reported the abusive tweets on her behalf, the staggering volume of harassment continued unabated. When reporters reached out to Twitter about the situation, the company initially responded with a link to a page explaining their “content boundaries”—not very helpful. Finally, after supporters started the hashtag #LoveforLeslieJ and called on Twitter to take action against racist trolls, the company responded with a longer note—but it still doesn’t say how the company will improve the situation for users who face rampant abuse:

“This type of abusive behavior is not permitted on Twitter, and we’ve taken action on many of the accounts reported to us by both Leslie and others. We rely on people to report this type of behavior to us but we are continuing to invest heavily in improving our tools and enforcement systems to prevent this kind of abuse. We realize we still have a lot of work in front of us before Twitter is where it should be on how we handle these issues.”

Read this next: Why Gaming Culture Allows Abuse—And How We Can Stop It
Read this next: A New Website Helps Bystanders Support Victims of Online Abuse 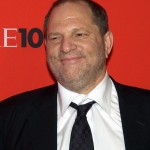 by Dahlia Balcazar
Weinstein isn’t the only powerful man in Hollywood whose patterns of predatory sexual behavior have been an open secret for years.