Trump is Assembling an Anti-LGBTQ Cabinet of Horrors | Bitch Media

Trump is Assembling an Anti-LGBTQ Cabinet of Horrors 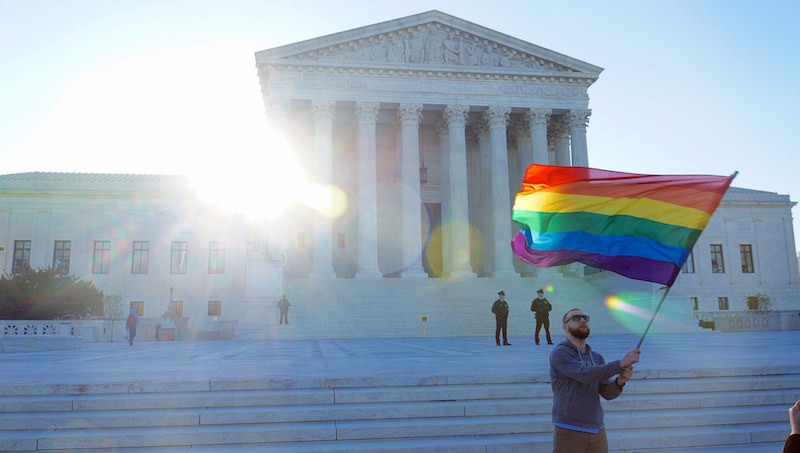 Waving the pride flag outside of the Supreme Court in 2015. Photo by Ted Eytan (Creative Commons).

Donald Trump’s incoming advisors are looking like a cabinet of horrors. Many commentators have pointed out that his cabinet is turning out to be, no surprise, a “binder full of white men.” Of the 66 people he’s suggested for the open positions, 85 percent are men—which would create a White House with gender and racial diversity reminiscent of the retrograde 1970s rather than 2016. While he’s recommended women for a couple positions, some areas of expertise are turned over exclusively to dudes—his economic advisory team, for example, entirely composed of white men.

These appointments matter because, as we’re all well aware, Trump himself has zero experience working in government. It’s these advisors who are going to be suggesting policies and actions. In addition to being white and male, many of Trump’s picks so far have a terrifying core value in common: opposition to LGBTQ rights. 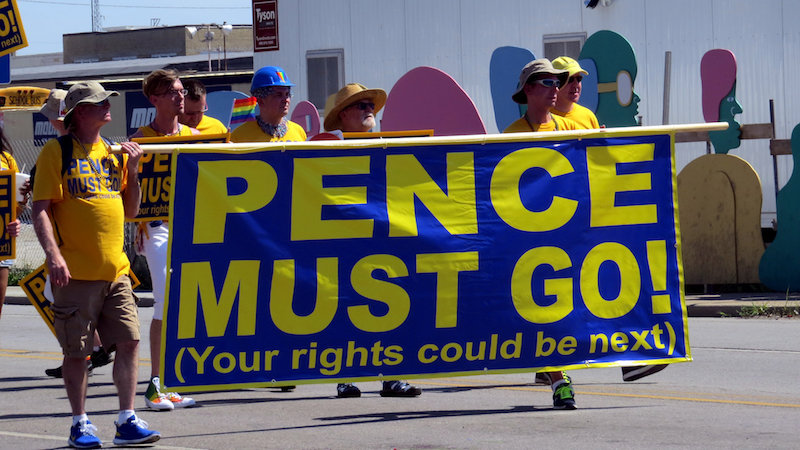 During the campaign, Trump sold himself as something of an ally to queer folks. After the massacre at the Pulse nightclub in Orlando, Trump thanked LGBT Americans and tweeted, “I will fight for you.” Log Cabin Republicans said Trump would push for LGBT inclusion as a good business move—including billionaire PayPal founder Paul Thiel, who donated $1.25 million to the campaign. As one gay Republican delegate told ABC news at the Republican National Convention, “We see a consistent line from Donald Trump that being pro LGBT and pro inclusion is a good business decision and I believe he’s going to bring that with him in the White House.”

But in his appointments, Trump is making it clear that his staff will be be fighting against LGBTQ Americans, not for them.

First on the docket is Vice President-elect Mike Pence. During his time as Indiana governor, he lead what  Rea Carey of the National L.G.B.T.Q. Task Force has described as “a direct, massive and concerted effort in the state of Indiana to deny equality to L.G.B.T. people.” Pence has advocated against same-sex marriage rights for 20 years and also argued for using public money to fund “conversion therapy”—a practice so dangerous that five states have banned its use on minors. As governor, Pence signed a bill that allows businesses to refuse to serve gay and transgender people by citing religious freedom. In Congress, he voted against employment nondiscrimination and also voted against the repeal of “don’t ask, don’t tell.” 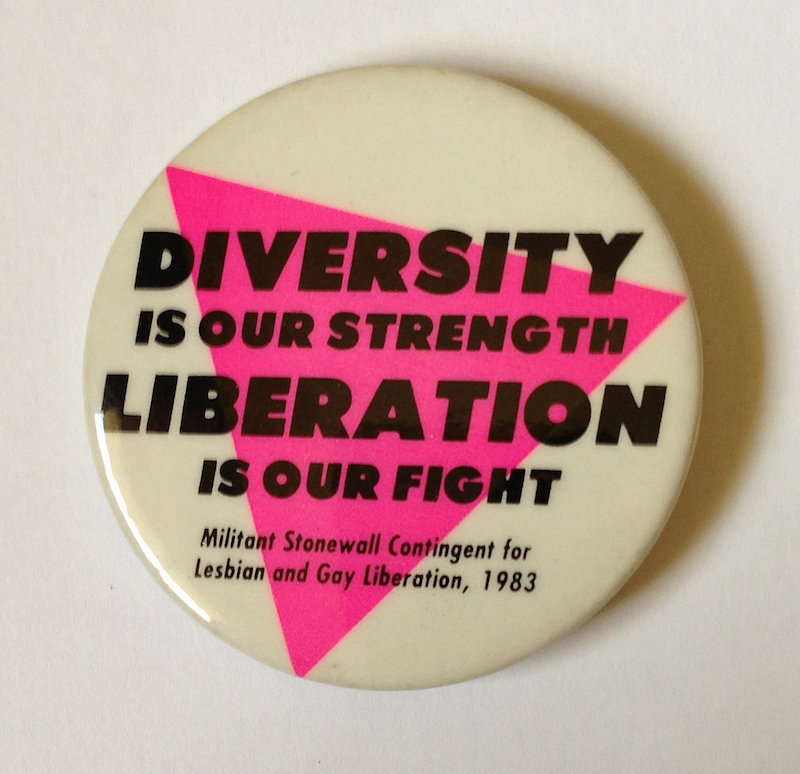 A pin from 1983, still relevant now. Donald Trump’s cabinet is so retrograde, maybe it’s time to bust out the vintage pro-LGBT gear.

Then there’s Senator Jeff Sessions, Trump’s pick for attorney general. He has opposed every LGBTQ-rights measure that has come through the senate, earning himself a “zero percent” rating by the the Human Rights Campaign. Here’s the horrific rundown of his record from the HRC:

“In Congress, Sessions voted for a Constitutional ban on marriage equality; voted against the Employment Non-Discrimination Act (ENDA); is a cosponsor of the so-called First Amendment Defense Act (FADA), legislation that could allow Kim Davis-style discrimination against LGBTQ people across the nation; voted against both the Matthew Shepard and James Byrd Jr. Hate Crimes Prevention Act and expanding hate crimes to include sexual orientation, gender and disability and against repealing Don’t Ask, Don’t Tell. Sessions also opposed the Voting Rights Act, has voted against reauthorizing the Violence Against Women Act, opposes immigration reform and has been on the wrong side of every civil rights issue in his long political career.”

Among the very few women in the proposed cabinet are Nikki Haley and Betsy DeVos, who Trump has tapped as ambassador to the UN and secretary of education, respectively. As governor of South Carolina, she said she would defend the state’s ban on same-sex marriage with a lawsuit. In recent years, she’s stepped back her rhetoric and dismissed conservatives calling for a transphobic bathroom bill in her state. But still, she has not worked toward LGBTQ inclusion in any way: her state has never passed an LGBTQ anti-discrimination measure, nor has she moved to support any. Now, she’ll likely be the United States’ representative to the world. Betsy DeVos, meanwhile, has voted with her money: she’s made huge donations to anti-LGBT campaigns, including $200,000 to an anti-same-sex marriage campaign in Michigan. It’s scary to think about how she could influence education policy in this country, when LGBTQ students already face high rates of bullying in schools.

So what’s at stake here? To be frank, lives are at stake. In the wake of Trump’s election, calls to LGBTQ suicide-prevention hotlines spiked. With these regressive people setting the course of policy, our federal laws will become even more hostile to the rights and existence of LGBTQ people.  LGBTQ advocates say it’s very unlikely that the Trump administration would be able to repeal the right to same-sex marriage that was affirmed by the Supreme Court last year. But Trump has promised to nullify Obama’s executive orders, including measures could do is repeal executive orders Obama passed that protect LGBTQ rights. And, of course, Trump will also be able to appoint justices to the Supreme Court—anti-LGBTQ justices will be able to sway future decisions about major constitutional rights.  Fighting these appointments is difficult. The Senate and Congress don’t have the power to approve appointments, but individual senators can place a “hold” on executive-branch nominees… though honoring these holds is at the discretion of the majority leader. Reaching out to senators who can work to “hold” these nominations is one route for action here. Working locally is another necessary step. Assuming this crew of anti-LGBT bigots passes federal policies that make life more difficult and dangerous for LGBT Americans, city governments, state governments, and local school boards are going to play a huge role in passing local non-discrimination and anti-bullying measures. Grassroots groups working on the ground to support LGBTQ folks will also be key in supporting LGBTQ Americans no matter who’s in federal office—reach out.

Additionally, we don't know whether Trump's administration will interpret Title IX to include the rights of transgender students, as the Obama administration did. My guess is not, as most anti-LGBTQ conservatives don't understand, or are not willing to acknowledge, the difference between biological sex and gender identity. Therefore, at this moment it's incredibly important that colleges, universities, and school districts take measures to support and include trans students.

As someone who participates within two radical/feminist/LGBT and diversity oriented collective organizations, I along with many of my co-workers, have a strong motive to keep these venues in operation. They are both located in New York City and surrounding areas, and we have lately been holding discussion groups, seminars and meetings to defend these organizations along with many other LGBTQ institutions. At the moment we are working on building a feminist activist art program featuring a diverse collection of work. I truly hope that this cause will help these types of places.

Dr. Ben Carson: "Well, my thoughts are that marriage is between a man and a woman. It's a well-established, fundamental pillar of society and no group, be they gays, be they NAMBLA [North American Man/Boy Love Association], be they people who believe in bestiality. It doesn't matter what they are. They don't get to change the definition. So he, it's not something that is against gays, it's against anybody who wants to come along and change the fundamental definitions of pillars of society." HUD Secretary nominee Ben Carson

Obama administration HUD Secretary:"Every American deserves to live with dignity, regardless of who they love or who they are. HUD is committed to fighting unjust discrimination and to expanding housing opportunity for all. We believe there are no second-class citizens. And I will do every single thing that I can to make sure that everyone is protected."- HUD Secretary Julián Castrohttp://portal.hud.gov/hudportal/HUD?src=/LGBT_resourceshttp://portal.hud.gov/hudportal/HUD…