Donald Trump Won’t Condemn White Supremacists Because He Is One 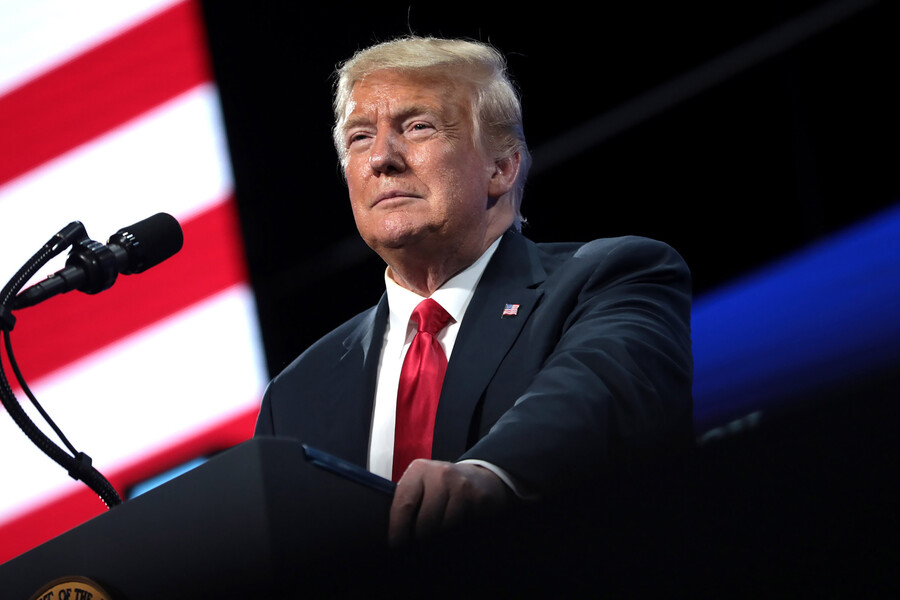 Donald Trump speaks with supporters at an “An Address to Young Americans” event hosted by Students for Trump and Turning Point Action at Dream City Church in Phoenix on June 23, 2020. (Photo credit: Gage Skidmore/Flickr/Creative Commons)

Last night’s debate was an absolute circus. FOX News anchor Chris Wallace fumbled over himself time and time again as he attempted to force Donald Trump to stick to the debate rules that both the president and his opponent Joe Biden agreed to beforehand. Trump interjected, talked over Biden, and lied so much that even Wallace had to fact-check him from the moderator’s table. We should’ve anticipated that this debate would be a disaster, but it still exceeded everyone’s expectations. There was a lot of blustering about police brutality, Trump’s COVID-19 response, and which candidate appeals most to Black Americans and has done the most for the community (whatever that means), but there was only a single mention of abortion rights. Given that so many of us were prepared for nonsense, few of Trump’s sentiments were jarring. There was one moment, though, that cut the at-home laugh track.

When Wallace asked Trump if he would condemn white supremacists and militias, the incumbent president unashamedly announced his support for the Proud Boys. Instead of answering the question outright, as any person who’s not a white supremacist would do, Trump danced around it, dodging the question altogether and signaling that the Republican tent is broad enough to include domestic terrorist groups. “Sure, I’m willing to [tell them to stand down], but I would say almost everything I see is from the left wing, not from the right wing,” he said. “I’m willing to do anything. I want to see peace. Who would you like me to condemn?” Though Biden encouraged Trump to call out the Proud Boys, in particular, Trump retorted, “Proud Boys, stand back and stand by. But I’ll tell you what. I’ll tell you what. Somebody’s got to do something about Antifa and the left because this is not a right-wing problem.”

There’s a difference between deflecting or political maneuvering and dog-whistling, but Trump used a national stage to confidently align himself with a Southern Poverty Law Center-classified hate group in the presence of millions of viewers. Though it isn’t politically expedient to call the sitting president a white supremacist, particularly in legacy newspapers that toe the line between holding power to account and being in close proximity to said power, Trump is one and whether he’s re-elected or cast out of the White House in November, he will continue being the figurehead that the Proud Boys and its ilk throw their support behind. We don’t have to assume anything about Trump’s character; we only have to listen to him say repeatedly that white supremacists are “very fine people” to know where he stands.

So who exactly was Trump attempting to rally? The SPLC notes that “rank-and-file Proud Boys and leaders regularly spout white nationalist memes and maintain affiliations with known extremists. They are known for anti-Muslim and misogynistic rhetoric.” For example, Proud Boys members are devout antisemites who use the internet to spread their message and attract more members into their ranks, though Facebook and Twitter finally banned some of their most prominent members in 2018. The Department of Homeland Security has even drafted a document that states that white supremacists will be the most “persistent and lethal threat” in the United States through 2021 due, in part, to increased tension around the election. “Lone offenders and small cells of individuals motivated by a diverse array of social, ideological, and personal factors will pose the primary terrorist threat to the United States,” the draft reads. “Among these groups, we assess that white supremacist extremists—who increasingly are networking with likeminded persons abroad—will pose the most persistent and lethal threat.”

In other words, their perspective of who classifies as American and who should be violently reminded of their second-class citizenship closely resembles Trump’s own perspective. In fact, they’re two sides of the same coin, willing to go to cruel lengths to reinforce their self-proclaimed superiority. Trump’s vision of America has been consistent since the moment he began campaigning: It’s white insofar as whiteness excludes Jewish Americans. It’s cisgender, heterosexual, and actively denying acute medical care for transgender Americans. It’s xenophobic—unless immigrants are white and migrating from European countries. It’s a country for the wealthy, those who are “smart” enough to manipulate the tax codes and evade paying their fair share. It’s for anti-choice evangelicals who are willing to trample on a person’s right to have an abortion (while also making it difficult for parents to secure basic needs for their children).

Disabled Americans, chronically ill Americans, and anyone who relies on state-sponsored insurance to survive don’t stand a chance in Trump’s America—and that’s the way he wants it. Though political pundits have encouraged us to pay less attention to what Trump says and more attention to what does, his rhetoric often echoes his policy proposals, designed to make America exile its most marginalized citizens even more. Trump isn’t a foolish man accidentally tweeting into the ether; he’s a white supremacist with a massive platform that continues to grow. And in order to achieve his vision, Trump uses his position to actively appeal to those who share his ideals—even if their approach includes violence. “The more chaos and anarchy and vandalism and violence reigns, the better it is for the very clear choice on who’s best on public safety and law and order,” Kellyanne Conway said on Fox & Friends in August, after Kenosha, Wisconsin police shot and paralyzed Jacob Blake.

“Make America Great Again” has always been a sinister phrase, but now it’s accompanied by a threat: by any means necessary.

In fact, that’s what Trump is signaling whenever he discusses the idea of “law and order,” a phrase he repeated over and over again during the debate: using the mechanisms of the law to push forward an agenda that creates a racial pecking order—one that prioritizes whiteness at all costs. That’s the reason he said there were good people on both sides after the Unite the Right rally in Charlottesville, Virginia, organized in part by former Proud Boys member Jason Kessler, resulted in Heather Heyer being killed. That’s the reason he’s been unwilling to publicly condemn Kyle Rittenhouse, one of his 17-year-old supporters who allegedly shot and killed two people in Kenosha. And that’s the reason a presidential debate was the perfect opportunity to visibly remind the Proud Boys and his other supporters that he stands with them, no matter what it might cost him politically.

When Wallace asked the president if he’d urge his supporters to “stay calm during this extended period [after the election], not to engage in any civil unrest,” he encouraged them to “go into the polls and watch very carefully.” Though the Democratic Party has been encouraging its base to become certified poll watchers, Trump wasn’t echoing their message; instead, he was asking his supporters to show up to the polls and intimidate prospective voters. “In Philadelphia they went in to watch,” he said. “They were called ‘poll watchers’—a very safe, very nice thing. They were thrown out. They weren’t allowed to watch.” Watching voters isn’t going to guarantee a “fair” election, as the president suggested. It’s simply going to deter some people, especially those from marginalized communities, from casting their vote—just as the president intends for it to. That way, as he suggested during the debate, he can argue that “tens of thousands of ballots [are] being manipulated” and attempt to invalidate the results.

And if Biden is elected, which most polls are predicting, then the Proud Boys will be standing by to inflict violence, cause chaos, and publicly pledge their allegiance to Trump, their forever president. He didn’t lose; the election was stolen. Trump is using a nationally televised debate to stoke flames that are already raging. Worst of all, his messaging is landing exactly as he intended it to: The Washington Post reported that Proud Boys members used encrypted app Telegram, conservative social media site Parlar, and other offline channels to express their joy about Trump publicly voicing his support. “He legitimized them in a way that nobody in the community expected. It’s unbelievable. The celebration is incredible,” Rita Katz, executive director of SITE Intelligence Group, which tracks far-right fringe groups, told the Post. “In my 20 years of tracking terrorism and extremism, I never thought I’d see anything like this from a U.S. president.”

Perhaps we’re just seeing a president unraveling as the end of his term possibly approaches, but most likely, we’re seeing a president attempting to enact his authoritarian vision for the country he wants to rule with an iron fist. Pretending as if his words are meaningless—as if it’s just business as usual—might’ve worked three years ago, but we need to pay keen attention to what he’s saying now. “Make America Great Again” has always been a sinister phrase, but now it’s accompanied by a threat: by any means necessary. At last night’s debate, Trump said exactly what he meant to say—and the very least we can do is recognize white supremacy as it stares us in the face and do something to stop it.

Read this Next: Pure Evil