As Trump Takes Office, We Will Keep Fighting | Bitch Media

As Trump Takes Office, We Will Keep Fighting 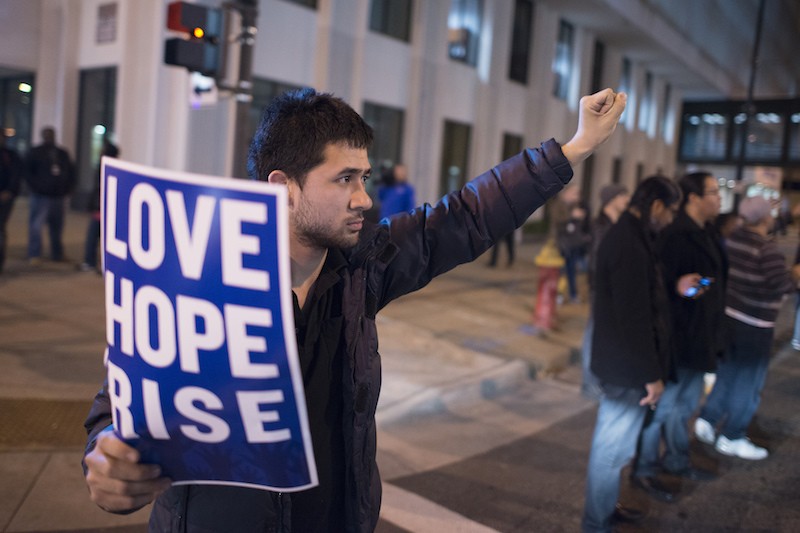 It was a nightmarish Election Day for the United States of America. Now, a man who had to be wrestled off Twitter by his campaign staff is our president-elect. We have voted in a man who, according to Mike Pence, supports throwing away the rights of transgender people to the “local level” so “common sense” can strip us of basic human decency. A man who infamously bragged about being able to sexually assault women whenever he pleased and barely lost a state because of it. Many queer and trans Americans are afraid. We’re very, very afraid. Not just because of what Donald Trump wants to do to this country, but because of what he symbolizes for so many bigoted Americans. He’s a shining beacon to the far-right, giving them a free pass to behave as heinously as they please.

I’m a trans lady living in Brooklyn. New York City is, of course, known for its diversity in gender, sexuality, race, and beliefs. But not all people in New York are accepting. Just look at Trump, a Manhattan businessman who somehow ended up being patient zero for an alt-right revolution. Trump isn’t a strange outlier, either; he isn’t some lizard that crawled out of the New York sewer system and started running amok between subway trains and yellow taxi cabs. He’s been at the heart of the Big Apple’s real estate for years, an important character of the elite New York social circle—if not the pinnacle of it. In some ways, he represents the worst parts of this city: The white elite looking down upon the marginalized, who live just a couple subway stops away.

There are many people like Trump who have lived or currently live in New York. After all, if you’re familiar with Candy Darling’s history, you’ll know this is a city that’s dealt with queer and trans bashing for years. This is a city where a trans woman was harassed on the subway just for being trans. This is a city where men comment on my “wicked ass” as I walk to Penn Station, a city where I have been groped on the way to a trans literature reading, a city where men feel so entitled to my body that I have been touched and followed on the way home. These men would surely turn even more hostile if they realized I am trans. I love New York, but when I see President-Elect Donald Trump, I remember what it feels like to be treated like a piece of meat in the city. 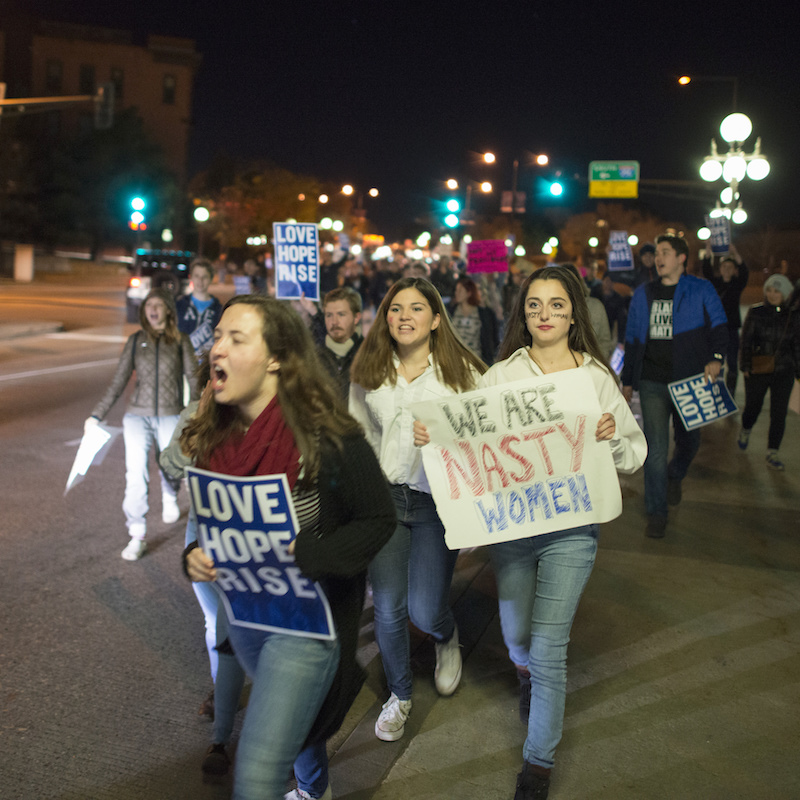 It’s easy to pretend that the dirt and grime isn’t such a big deal, of course. The past eight years have been supportive beyond belief under President Obama. Witnessing the rise of social media under his presidency as well as the emergence of the first major political battles over trans discrimination laws, so many of us assumed the United States was veering toward inclusivity, progress, and support for marginalized folks. That doesn’t seem to be the case in the larger American picture. Even though Election Night was incredibly close, Trump broke into the so-called Democratic “firewall,” stealing Pennsylvania from the Democrats. For us, that barrier was a symbol of progressivism. Pushing into the mid-Atlantic suggests that we no longer can trust our own neighbors. We’re lucky that more parts of the Northeast didn’t go turncoat.

And so, as many of us are still reeling from the shock, the biggest question LGBTQ voters are asking now is: What next? I’m asking that question too, because honestly, I don’t know. Will we lose marriage equality? Will we see anti-trans bills passed through Congress? Will the Affordable Care Act become a thing of the past, shutting out trans people across the nation from life-saving medical care? I don’t know. I’m still taking time to process the reality, walking up to my bathroom mirror and thinking, “this is real now, Donald Trump is our next president.”

But once that initial shock fades, once we realize that Thursday, Friday, and Saturday will be days just like any other, then we need to start coming up with a plan. Trump’s administration reaches the White House in two months, and we need to be ready on day one to fight back against whatever he throws at us.

The anxiety I’ve been feeling with the Trump win reminds me of the way I felt in 2015, right before I came out. When I first began transitioning, I had to pour my blood and sweat into work just to present as my true self. I had to drop clubs and fit a part-time desk job into a packed school schedule just to purchase hormone replacement therapy out of pocket. I had to sacrifice just to be who I am today. It was a difficult experience, but it taught me something: Nothing important is ever accomplished without putting your time on the line. One year later, that same lesson applies here. Right from the start, we need to promise to do more collectively. We need to walk into shelters and volunteer. We need to donate to law centers that support our rights as queer and trans people. We need to canvass for politicians we believe in, and we need to give a dollar if Bernie Sanders or Elizabeth Warren asks for one. Putting our energy on the line is the only way we can give coalitions the support they need to fight back.

And for those of us who are artists, we need to keep our communities alive by expressing our thoughts, our feelings, and our fears right this very moment. That means writers need to write more. Artists need to create more art. Poets need to share their voices, and performance artists need to perform. And if you aren’t an artist, that means supporting creators. If you like something, donate. If you want to give back, find a way to pay it forward. Start a writers’ workshop. Open up a poetry reading. Lend your printer if you’re a small press, share your paint if you’re a paint shop, tell your friends about a book or zine you loved. If we want to survive a Trump presidency, we need to be there for one another, and that means giving each other the means to get by. Which is often money, raw materials, and emotional support.

But it’s not just community events, it’s also community building. Conflict is a common part of queer and trans life, and it’s something I’ve experienced both offline and online. Take a handful of people who have gone through difficult life experiences and put them into a shared living space, and there are bound to be fights because each of us have developed coping mechanisms that don’t always work well together. But many of the problems we focus on are small. They’re questions of who is dating who, why someone dresses the way they do, how come x is associating with y. They’re insignificant in the long term. Which means, above all, it’s not just America that needs to come together. The LGBTQ community needs to as well. We need to stop fighting with one another and start supporting one another. The L and G need to embrace the T with open arms as their brethren. Trans folks need to pool their resources together to create support spaces. We need to learn to respect our differences but embrace a united front against the bigotry and misogyny that painted Trump’s campaign. Because if we squabble with each other over the small things, then we aren’t going to be able to work together when a major conflict hits our front doors.

As I think about our past, our present, and our uncertain future, I’m brought back to some words shared by Mara Keisling, the Executive Director of the National Center for Transgender Equality. “Over the last two decades, we have made faster progress than any movement in American history,” she wrote. “The progress has come through supportive and unsupportive presidents because we always fight. Transgender people will fight to show the people in their lives who we are. We will fight to show America who we are.”

The LGBTQ community has weathered a lot over the past 100 years alone. And over those 100 years, we never gave up. The Trump administration will be a tough time for the United States, for sure, but our queer and trans ancestors put their lives on the line so our generation could pick up from where they left off. We can’t back down now. We need to buckle down, stand united, and give 100 percent. Because we might have lost the battle, but the war for our rights is still raging on, and I’m not prepared to surrender any time soon.

Relevant: Behold! A Portrait of Donald Trump Made From Menstrual Blood 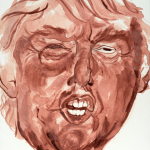 by Sarah Mirk
Artist Sarah Levy painted Trump's face with blood from right out of her you-know-what.