Super Tuesday came and went and in its wake we are left to grapple with the mystery that is Donald Trump.  Why does he continue to win states, lead polls, and gain supporters?  Statistician Nate Silver cited the lack of data as to why he and others, as recently as December, were giving Trump such small odds at being in the lead at this point. Political observers are scratching their heads over how Trump holds onto a lead in the polls despite his bad behavior—even his unseemly comments about his dick size haven’t seemed to dissuade voters. There are a lot of reasons that Trump remains mind-bogglingly popular—most obviously his supporters’ racism and xenophobia—but we should also place some of the blame for the popularity of Trump on our addiction to reality TV.

Trump’s rise in popular culture came along with his business-themed reality show The Apprentice. “The business savvy we were presented on The Apprentice is that money trumps ethics. Contestants were rewarded for doing things that would get actual businesspeople fired,” says Jennifer Pozner, the executive director of Women In Media and News and author of Reality Bites Back: The Troubling Truth About Guilty Pleasure TV.  Pozner watched and transcribed thousands of hours of reality TV during Trump’s time on The Apprentice.

Consider the rise of Trump a warning as to why we need to analyze what we consume in the media, especially reality TV. What we see is highly edited and framed to tell a specific story—just like the narratives presidential candidates tell about themselves.

According to Pozner, the popularity of The Apprentice can be linked to Trump’s popularity at the polls. For many US voters, the peek we get into a boardroom during the show is the closest we ever get to a real boardroom. The Apprentice worked on the basic premise that Donald Trump was a superior businessman who knew how the US economic system worked and was successful because of that knowledge. Pozner points out that this knowledge is exactly why voters whose number one issue is economic insecurity may be attracted to Trump, especially GOP-leaning voters. Throughout the recovery from the Great Recession, the GOP’s talking points continue to downplay any signs of recovery. According to the Pew Research Center, the recovery has been one of the slowest in recent history.

That said, if you believe that the economy continues to fail overall and that professional politicians are unable to turn things around, a very successful businessman with a penchant for dominating the news cycle might be just the candidate that catches your eye. Nevermind the fact that, as John Oliver and others have pointed out, Trump got rich by making false real estate promises and regularly screwing people over.

The problem with Trump and his apparent success is not just the litany of failed businesses behind him, but also the fact that the business skills he showed on The Apprentice are horrible to say the least. The Apprentice includes many instances of Trump displaying sexist and discriminatory views. For years, TV viewers were shown that fraudulent and unethical behavior is acceptable in the workplace. And without ample media literacy to unpack what we see we, this lie has stuck.

After years of right-wing rhetoric about how “government should be run like a business,” it’s no surprise that Trump is getting traction from positioning himself as CEO-in-Chief. But it is too easy to blame Trump’s rise in the polls solely on reality TV. We cannot ignore the fact that Trump’s “Make America Great Again” campaign gives cover to the bigotry of many of his supporters. As the New York Times states, Trump has “built a significant part of his coalition of voters on people who are responsive to religious, social and racial intolerance.” Over the past year, as Trump has made derogatory statements about Latinos front-page news and pushed the idea that all Muslim refugees should be banned from the country, the Southern Poverty Law Center has tracked a marked rise in white supremacist groups. It’s worth repeating that Trump won the endorsement of the KKK—even though he rejected the endorsement, it’s clear that his ideals resonate with racists. 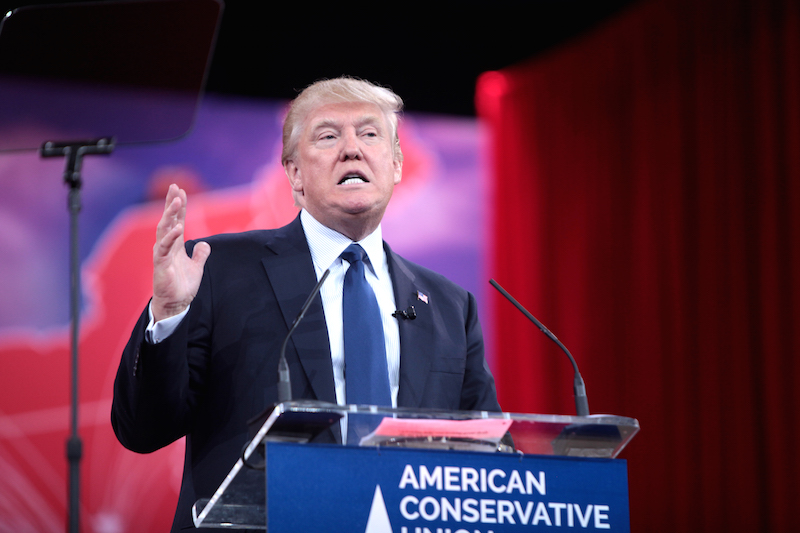 The fact that the establishment wing of the GOP is revolting against Trump and giving speeches about how they repudiate his messages is laughable. As a recent SNL skit pointed out, the GOP may be able to state that they have never said racist things, but gosh darn it, they have certainly implied it. Trump has now taken those race-baiting implications and is broadcasting them overtly.

While pundits and people who rage against the Trump machine want to blame The Apprentice and its viewers, Pozner would ask us to place some blame on Trump and executive producer Mark Burnett. “They were the people who shaped and framed the narrative around Trump as this epic businessman who could do no wrong,” says Pozner. “The very things they chose to edit into the scripts were sexual harassment, race-based job discrimination. Those were presented to viewers as what a good boss should be doing.” Trump and Burnett spent a decade instilling TV viewers with the idea that those tactics are what makes a good businessman. It should come to no surprise then that CBS head honcho Leslie Moonves recently admitted that Trump is great for ratings. But now instead of bringing in viewers for a reality show, he’s headlining the American election—and using his platform to spread bigotry.