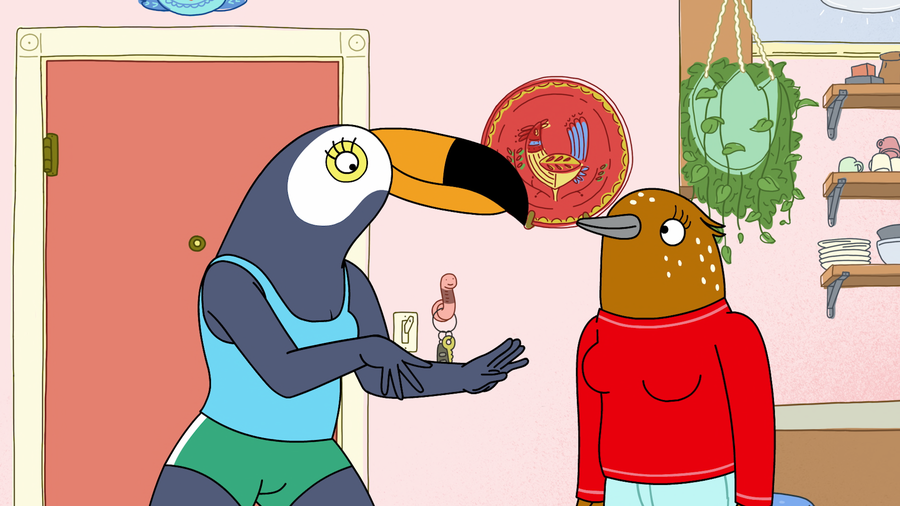 Two friends growing up and growing apart often marks the end of a story. Broad City ends with Abbi (Abbi Jacobson) leaving New York and, by extension, leaving behind her best friend Ilana (Ilana Glazer). At the end of Girls, Hannah (Lena Dunham) moves to upstate New York with her newborn son, sullenly accepting a newfound adulthood away from the big city and her closest friends. Even the end of Gilmore Girls chronicled the closeness that Lorelai (Lauren Graham) shares with her daughter Rory (Alexis Bledel) eroding as Lorelai decides to finally commit to Luke (Scott Patterson). We see this narrative thread in female-centric cinema too—from Claudia Weill’s groundbreaking 1978 indie Girlfriends to Susanna Fogel’s more contemporary Life Partners.

For better or worse, stories about female friendships are often bookended by one or both of the friends experiencing a big life change and moving on—physically and emotionally. Lisa Hanawalt’s new Netflix series Tuca & Bertie tweaks this premise: Tuca (Tiffany Haddish) is moving out of the apartment she’s shared with Bertie (Ali Wong) for most of their 20s and Bertie’s boyfriend Speckle (Steven Yeun) is moving in. Tuca isn’t going far; she’s just moving to a different apartment upstairs as part of her and Bertie’s mutual vow to depend less on each other in their 30s. Tuca is a recovering alcoholic who’s trying to figure out who she is now that she’s sober. Bertie is navigating a serious relationship with Speckle while also realizing that she doesn’t know herself quite as well as she thought she did.

Tuca and Bertie’s stories run parallel throughout a 10-episode season that tries to juggle their anxieties while also packing nearly every scene with jokes and sight gags. Tuca & Bertie delivers rapid-fire jokes that all build off of one another. Comedian Nicole Byer is a standout, voicing multiple side characters and even inanimate objects. The show sets itself apart from its most obvious counterpart—BoJack Horseman—by taking a step back from reality and embracing the absurd. Tuca and Bertie’s world is bursting with life and hilarious gags—like one of Bertie’s boobs hopping off her chest and going to a bar or a cake made from ashes coming to life. The show aims to use the emotion and trauma associated with womanhood as fuel for cathartic humor.

As Tuca, Tiffany Haddish effortlessly translates her flirty and brash persona into a dynamic, emotionally complex and endlessly watchable cartoon character. Tuca is a working-class tucan with old-school resilience and a love for adventure. Her anxiety about Bertie leaving her behind form the season’s emotional core, with the show’s best moments focusing on Tuca’s late adjustment to adult life. Haddish can be overpowering at times; her character has a grand presence that can be felt in every scene. Most of the main cast is new to voice acting, but Haddish already sounds like a natural, heightening the animated world around her with raw charisma and enthusiasm.

Tuca only gets two standout episodes—“The Deli Guy” and “Plumage”—but each adds so much texture to her character. “The Deli Guy” tackles questions that are often overlooked onscreen: How does a person date after getting sober? How do they evaluate their dating history when they were drunk for most of it? How much of their drunk persona is a part of who they actually are? When Tuca goes on her first sober date, she has no idea how to act. She wears too much makeup, deflects romance with a forced detachment, and flashes her boobs when she runs out of ideas. For the first time, Tuca has to deal with her anxieties head-on instead of masking them behind bravado, and she soon learns that she’s afraid of getting hurt in romantic relationships.

Tuca & Bertie doesn’t follow up on Tuca’s romantic life beyond the “The Deli Guy” episode, but she still spends most of the season looking for a purpose. It would be interesting to see Tuca grapple with her intimacy issues, either by getting into a relationship or talking to a counselor or Alcoholics Anonymous sponsor about her fears. In “Plumage,” Tuca visits her rich aunt (Jenifer Lewis) who pays all of her bills. She takes Bertie’s boyfriend Speckle with her because she wants to to bond with him, but Speckle ends up getting drunk and serving as comic relief in an otherwise tense episode. “Plumage” begins funnily enough, but the jokes are slowly stripped away to reveal a darkness that’s lurking just beneath the surface of Tuca and her aunt’s relationship. As she gets increasingly drunker, Tuca’s aunt begins insulting Tuca and scoffing at her sobriety.

For better or worse, stories about female friendships are often bookended by one or both of the friends experiencing a big life change and moving on—physically and emotionally.

Interestingly, the episode ends with Tuca’s plot being cast aside to home in on a crucial character moment for Bertie. Though the episode delves deep into Tuca’s pain, it disappointingly robs her of a final moment. Most of Tuca & Bertie’s self-discovery narratives are designed to unravel Bertie’s neuroses. “The Sugar Bowl,” “The Promotion,” “The Open House,” “Yeast Week,” “The New Bird,” and the season finale “SweetBeak” all center around Bertie’s fear of commitment, her relationship with Speckle, her hatred for her office job, and even her sexuality. Bertie is afraid of everything and it’s unclear how she will deal with her phobias. Each episode picks at Bertie’s wounds without presenting a easy pathway for healing them.

The penultimate episode, “The Jelly Lakes,” provides necessary backstory to Bertie’s anxiety and her fear of men. Bertie goes back to the summer camp where she spent her childhood and confronts the sexual trauma she experienced at the hands of one of the camp’s lifeguards. Bertie’s assault is tastefully rendered in shadows, but in some ways echoes Jennifer Fox’s harrowing film The Tale and even Transparent. Like Shelly (Judith Light), Bertie internalized a childhood assault that’s caused her to shrink herself in adulthood. While Bertie is able to confront the trauma, the show leaves little room to delve deeper or examine the fallout of her returning to the site of her assault. There are moments throughout the season where it seems as if the show is going to examine Bertie’s decision to hide her troubled sexual history from Speckle, but those meatier questions are put on the back burner as the season moves through its most prominent emotional arc: Tuca and Bertie have a fight that paves the way for an end-of-season reconciliation.

Temporarily breaking up a friendship can be a necessary narrative tool in sitcoms, but it only works if the characters have meaningful solo adventures that help them forge a healthier friendship. When Charlotte (Kristin Davis) calls out Carrie (Sarah Jessica Parker) for trying to break up Big’s (Chris Noth) marriage, their time apart pushes Carrie to reconsider her actions and ask herself if Big is worth the trouble. Tuca & Bertie has difficulty making these solo adventures feel worthwhile. They mainly wander around missing each other and neglecting their individual and collective issues. Key character moments end a bit too abruptly, a clear sign that Hanawalt is still figuring out the show’s tone.

With 10 episodes, Tuca & Bertie is already one of the longest-running adult cartoons created by a woman. Even while critiquing the series, I think it’s important to sit with the fact that Hanawalt and her team are burdened by monumental expectations before viewers even press play on the first episode. With its unique humor, talented cast, and vested interest in the complexities of female friendships, I believe Tuca & Bertie has the potential to break the glass ceiling for women-led adult cartoons. All it needs is the time and support from Netflix for it to truly come into its own. 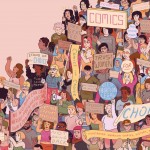