“...Baby One More Time” and the Pop Princesses Who Started a Moral Panic 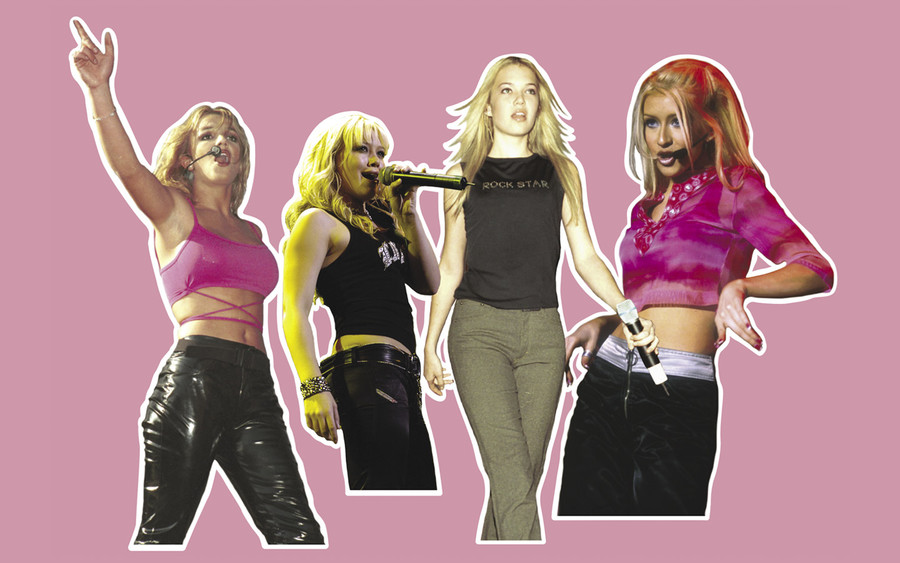 “…Baby One More Time” is one of those rare songs that, two decades after its release, is still instantly recognizable by its opening three-note riff. That “dah-nah-nah” hook transports listeners to 1998, when Britney Spears, alongside ’N Sync, Christina Aguilera, the Backstreet Boys, and other acts, kick-started the teen-pop trend that helped define culture at the turn of the 21st century. The bold bass slaps, distinctive purrs on the iconic “oh baby, baby,” and shimmering Max Martin beat in “…Baby One More Time” embodied the glossy, manufactured smoothness of late ’90s pop music.

The song is tethered to a legendary music video replete with Catholic schoolgirls in midriff-baring uniforms nailing a choreographed dance routine in a high-school hallway. In hindsight, we can appreciate Spears’s visually indulgent performance in both the song and the video, but 20 years ago, “…Baby One More Time” sparked anxiety among critics who felt that this kind of pop music had a “soullessness that saturates Stateside charts and consists of nothing but over-chewed bubblegum beats” and compromised the integrity of real music.

Much like the conveyor-belt construction of hit pop songs, the sexuality of Spears and the other pop princesses of her era was consumed en masse and then deemed inauthentic and dangerous by media, critics, and “concerned parent” groups. Since, as musicologist Stan Hawkins argues in his 2017 anthology on pop music and gender, “impressions of gender are construed in the form of fantasies and pleasures in popular music,” these teen singers were considered fetishistic ploys who blended innocence with eroticism, subsequently corrupting their young audience. And the media capitalized on this fictitious moral panic.

Music critics were imagining a cultural battle over sexual impropriety rather than considering the “Lolita panic” as symptomatic of an intense obsession with watching, regulating, and protecting an idealized (white) girlhood. In April 1999, Rolling Stone released a notorious issue that featured a teenage Spears on the cover dressed in underwear and cradling a stuffed Teletubby toy. NME claimed the “…Baby One More Time” video had a “Lolita paedo-creepiness” but that Spears knew “exactly how men’s grubby little minds worked.” And in 2003, Rolling Stone referred to her as a “jailbait dynamo” born from Sweden’s “Lolita-pop dollhouse.”

In this world, white, affluent singers could be “every” girl and deliver optimistic, angst-free pop; Spears, Mandy Moore, Hilary Duff, and other thin, white, heterosexual teens eagerly capitalized on the idea of a “teen queen” who could embody the ideals of postfeminist girlhood.

It is worthwhile to recall that “…Baby One More Time” debuted during one of the peaks of postfeminism, an offshoot of 1980s neoliberal individualism that’s rooted in the idea that the goals of feminism were realized in the ’70s and ’80s. Therefore, as Angela McRobbie posits in 2008’s The Aftermath of Feminism: Gender, Culture, and Social Change, “feminism is decisively aged and made to seem redundant” because young women have access to the “tropes of freedom and choice.” In postfeminism, individual achievements are celebrated as markers of girl power while failure is rarely considered evidence of systemic disadvantage. Freed from feminism’s political origins, women’s empowerment can be ultrafeminine and playful while obscuring barriers of privilege around race, class, and sexuality. (Think of the Spice Girls’s depoliticized cries of “girl power!”)

In this world, white, affluent singers could be “every” girl and deliver optimistic, angst-free pop; Spears, Mandy Moore, Hilary Duff, and other thin, white, heterosexual teens eagerly capitalized on the idea of a “teen queen” who could embody the ideals of postfeminist girlhood. Their lucrative popularity was grounded in a requisite youthful innocence that necessitated protection and upkeep, including a close surveillance of their sexuality and virginity. As Hazel Cills notes in a January 2018 article for Jezebel, many of these teen-pop stars, including Spears and Duff, spoke openly about their commitment to remain a virgin until marriage.

In 2011, sociologists Laina Bay-Cheng, Jennifer A. Livingston, and Nicole M. Fava conducted focus groups with girls between the ages of 14 and 17 and found that the supposed high stakes state of being girls “becoming” women made them view sex as a risk to their future. But those perceived risks—combined with cultural ideals about “self-determination, striving, and success”—led these girls to be seen as both victims and sexual “gatekeepers” who “bear responsibility for their sexual traumatization.”

The artfully modified schoolgirl uniform in “…Baby One More Time” was, in fact, the perfect presentation of this dueling apprehension and fixation over the inner lives of girls and the boundaries of their freedom. Spears’s conflicting traits—the naive innocence and the bold eroticism—expressed both the threat and the ideal of white girlhood that needed to be protected. And that wary reception could only be mitigated by genuine “talent” that legitimized the music in spite of the artist’s overt sexuality. For NME, Christina Aguilera’s impressive vocals proved “there was soul beneath the arseless chaps. But Britney [Spears] does artifice far better than she does soul.” Aguilera was branded a “rebellious bad girl” because she pushed the boundaries of the coyly sexual teen pop-star by singing about abuse, sexism, and mental health. But her natural talent allowed her to be positioned in opposition to manufactured, lip-synching Spears. Girls in pop music were Trojan horses for either artificial music or corrupting moral influences, so choosing Aguilera as the “real” artist boasted the ability to spot the fraud.

Rolling Stone’s first cover story on Spears guessed at the legitimacy of the emerging teen-pop industry. “Is Spears bubblegum jailbait…or malleable Stepford teen?” Unable to rest on an answer, the piece concluded by imagining her music’s worth in the future—a time after girlhood. “[I]f you’re standing in some bar 10 years hence and ‘…Baby One More Time’ comes on the jukebox, you will smile. And you will move.” The prediction proves prescient: Twenty years later, the apprehension surrounding Spears and the teen pop-stars of the ’90s has mostly evolved into an appreciable nostalgia. The saccharine sounds that once drew critical ire have been stripped of unease and declawed. When “…Baby One More Time” comes on, we can now simply appreciate Spears’s moment of transition: before the career circus, before womanhood, before the world changed.