ScreenTurning 20King of the Hill 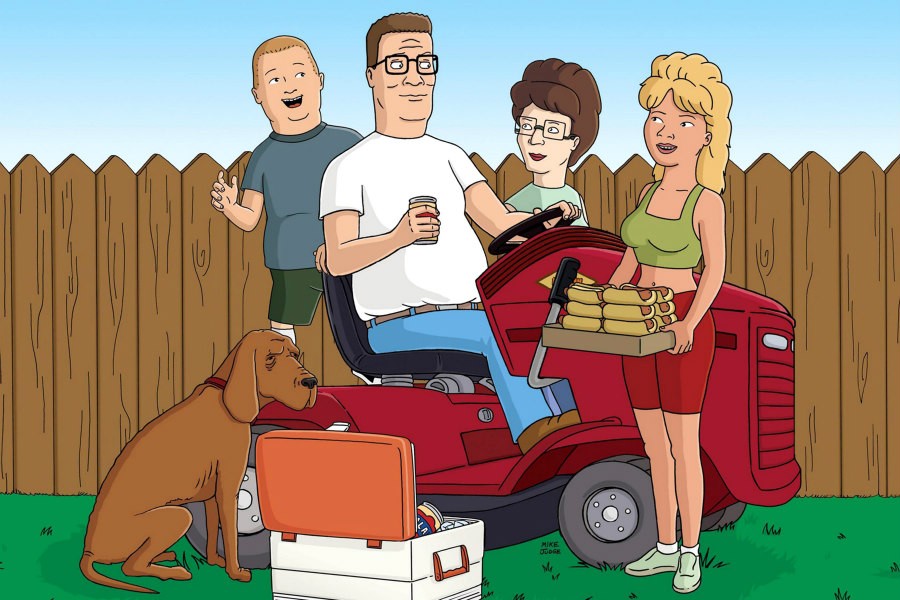 My love for King of the Hill began with a single gif of an adolescent boy laying in bed with a pile of potato chips stacked on his chest. Rather than sitting up, he uses his tongue to scoop up the salty snack. Since I’ve similarly utilized my tongue to consume individual pieces of popcorn from the palm of my hand, the gif struck a chord. Although I recognized the boy as Bobby Hill (Pamela Adlon), son of King of the Hill’s Hank (Mike Judge) and Peggy Hill (Kathy Najimy), I was surprised to find myself connecting with him. As the daughter of mixed-status Mexican immigrants from the Bay Area suburbs, I never considered that I might have something in common with a fictional white boy from the Bible Belt. But there’s someone for everyone on King of the Hill, and Bobby is my favorite feminist-as-fuck token of resilience.

King of the Hill was once the second-longest running animated series in history behind The Simpsons. Twenty years ago, co-creators Mike Judge (Beavis and Butt-Head, Silicon Valley, Office Space) and Greg Daniels (Saturday Night Live, The Office, Parks and Recreation), debuted the sitcom, which ultimately spanned 13 seasons and 259 episodes. The show follows the lives of ordinary folks with strong morals and a love of pickup trucks. Although King of the Hill centered around the mundane adventures of Hank—a blue jean-wearing family man—the everyday journeys of his wife Peggy, son Bobby, and niece Luanne (Brittany Murphy), are just as well-developed. Whether the characters are navigating visits from archaic family members, combatting snooty peers at soccer games and art galleries, or preaching about the godsend that is propane, their experiences appeal to people on both sides of the aisle.

Arlen, the small Texas town where King of the Hill is set, represents the trials and tribulations of the American blue-collar worker and the values that the Republican party once tightly clung to.

Even as we imagine Arlen as a place where Confederate flags and truck nuts might adorn vehicles, the Hills just want calmness, fairness, and the freedom to drink beers in residential alleyways. For the Hills, everything boils down to doing the right thing. Bobby, an empathetic “husky” boy who proudly marches to the beat of his own drum, often has to remind his parents of this all-important lesson. In season three’s “Good Hill Hunting” episode, Bobby’s feeling left out when the kids on his block successfully reach a deer-hunting milestone, and he’s without a taxidermy trophy of his own. Hank then decides to take him to a resort where deer roam freely and automatic feeders reel them in. Just as Bobby steadies his rifle to shoot a buck, he pauses and says, “This isn’t right, is it dad?” Hank agrees, and they leave (almost) empty-handed.

During the “Transnational Amusements Presents: Peggy’s Magic Sex Feet” episode near the end of season four, Bobby finds his mom in tears as she faces body-shaming around the size of her feet. He consoles her with body-positive empowerment: “Mom, I’m fat, but big deal. I don’t feel bad about it. You never made me feel bad about it, and just because there are some people in the world who want me to feel bad about, doesn’t mean I have to.” Bobby loves his body, and he knows the joys of sharing self-love with others as well. Even though Hank and Peggy are sometimes strict and comically antiquated (like the time they dubbed all show business inherently evil or Hank asked, “Why would anyone smoke weed when they could just mow a lawn?”), compassion and honest conversations easily sway their resistance to change. For many families across the United States and beyond, Bobby represents the head-on challenges that can come when generations clash as times change. He is the subtle agitation that forces his parents to think differently and, at times, more kindly.

Despite what Hank or his neighbors might suspect, defying gender norms is routine for the Hill household. Bobby prefers to protect his Texas history textbooks with pink-striped paper; wants to pursue a career in prop comedy, not propane; and tends roses instead of being towel manager for the local football team.

While King of the Hill often explores notions of gender roles, such as high femme Luanne being revealed as a secretly skilled mechanic, Bobby’s “feminine” mannerisms are essential to his character and are often a point of contention with his father. Hank’s discomfort with Bobby’s behavior is frequently expressed with his signature line, “The boy ain’t right,” or simple shudders accentuated with “Bwah!” Talking about emotions doesn’t come naturally for Hank, but even when he doesn’t understand his son, he always seeks to make things right. In season one’s “Shins of The Father” episode, Hank gets a visit from his own brash father, Cotton (Toby Huss), and is forced to combat misogyny when it trickles down to Bobby.

After telling Cotton that Bobby won’t grow up to be a “woman-hating old fool” moments before kicking him out, Hank has a heart-to-heart with his son and firmly explains that women weren’t put on earth to serve men (albeit, at a waitress-on-roller-skates drive-in.) It’s a scene that perfectly sums up the show’s attention to comical balance, complexity, and wit—Hank destabilizes what’s expected from a traditional “man of the house” without even knowing it.

Strangely, one thing that Cotton does get right is neighbor Kahn Souphanousinphone’s (Toby Huss) ethnicity. The Souphanousinphones are also introduced in season one during the episode, “Westie Side Story.” When they meet the Hills, Kahn explains they’re from Laos by way of California, but Hank immediately responds with “So are you Chinese or Japanese?” 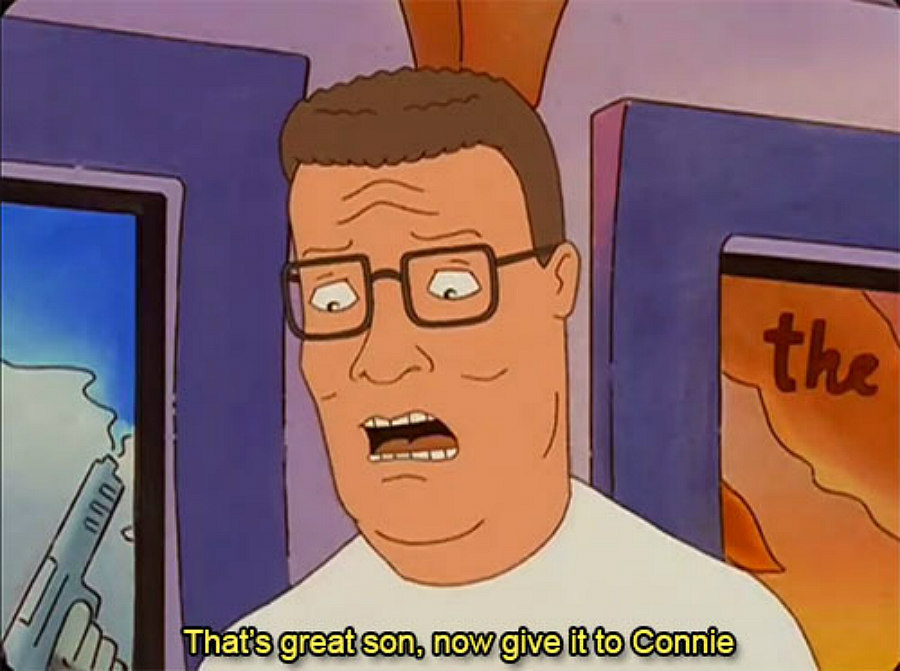 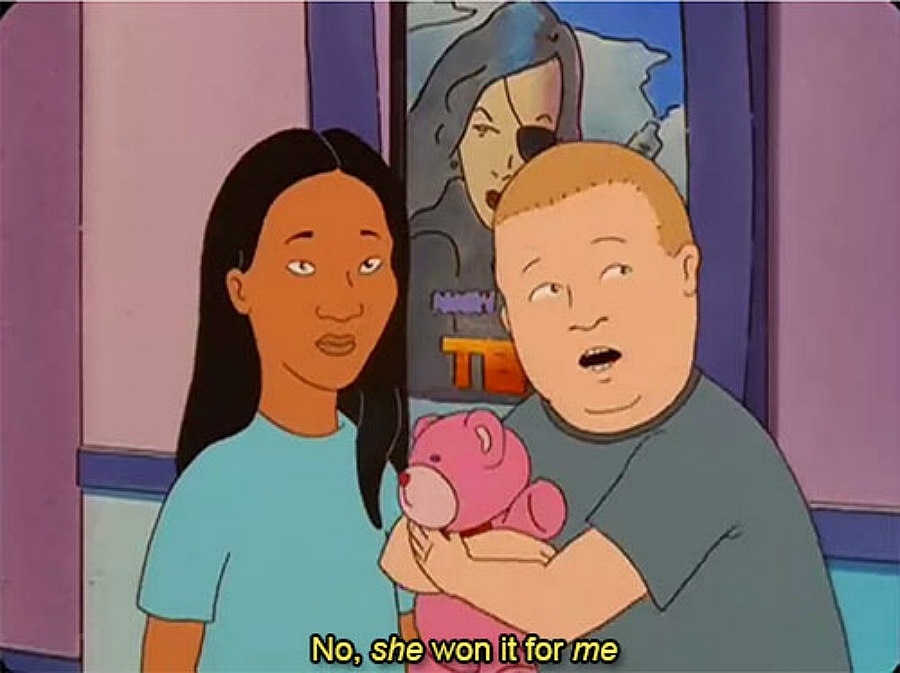 Bobby Hill and Connie Souphanousinphone in King of the Hill (Photo credit: FOX)

Even Peggy—typically a class act for conversations around equality—perpetuates stereotypes by uttering “the Orient” and alluding to communism. Bobby, however, doesn’t seem to mind to his parents’ hesitance, and he quickly befriends Kahn’s daughter Connie (Lauren Tom). Later in the series, they even fall in love and by the season six finale, a newly smitten Bobby proudly says to Cotton, “Love doesn’t care about what you look like—or even if you speak the same language.” Although the Souphanousinphone family is often othered by the white characters within the series, King of the Hill emphasizes ignorance over malice. Kahn frequently fights this ignorance by repeatedly calling his neighbors rednecks and belittling Hank, likely as a means of reclaiming autonomy.

Even more troublesome, Kahn is voiced by Toby Huss, the same white actor that voices Cotton, and the character drips with what Alison Reiko Loader calls yellow voice: “an accent not specific to any linguistic origin but one that fulfills audience expectations of what Asians sound like, thus racializing them as foreign and all the same.” While some fans are quick to point to the ways King of the Hill challenges issues of representation, it’s impossible to ignore the way the show reinforces problematic stereotypes about Asian Americans. At the same time, the issues only amplify the realism of King of the Hill and highlight what conversations still need to be had in communities around the country. After all, engaging in dialogue is one of the most effective steps to combat racism.

There have been recent hints that the Fox series might join the revival trend, but nothing has been confirmed. In dystopian times like these, we need Bobby Hill now more than ever. We need boys on television that aren’t afraid to name their whiteness, stand up to bullies, or wear cutie sweatpants. If a fella as soft and sensitive as Bobby can make it and gently push their gun-loving, conservative families toward compassion, anything is possible. Let’s hope we get to revisit the small town of Arlen soon enough. #BobbyforPresident

Welcome back to Pop Pedestal, where we take time to pay tribute to our favorite characters in pop culture. This week I’m...