Doing It Like MenDid “Sex and the City” Really Revolutionize Sex On TV? 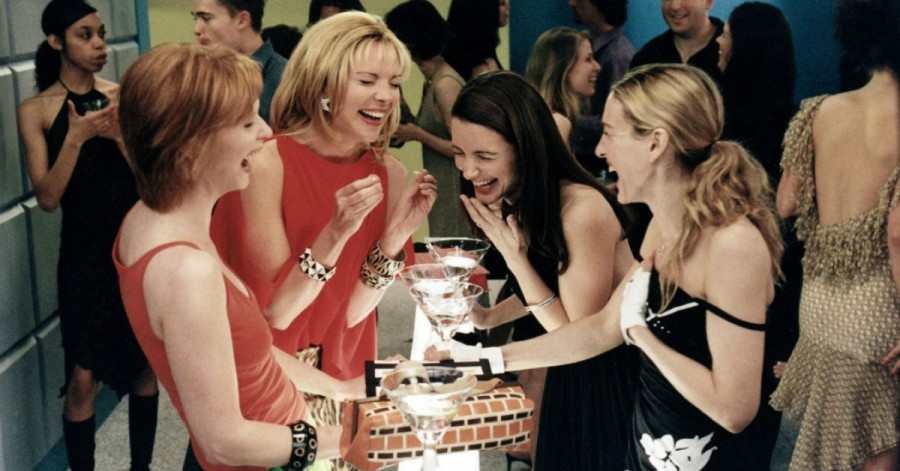 Cynthia Nixon as Miranda, Kim Cattrall as Samantha, Kristin Davis as Charlotte, and Sarah Jessica Parker as Carrie in Sex and the City (Photo credit: HBO)

On June 6, 1998 at 9 p.m. EST, we met Carrie Bradshaw (Sarah Jessica Parker), a sex columnist living in Manhattan and working on a story about “women who have sex like men.” Samantha Jones (Kim Cattrall) was already scandalizing their group of mutual friends with her no-strings-attached exploits. Carrie’s other friend, Charlotte York (Kristin Davis), warned the audience that “most men are threatened by successful women” and “if you want to get these guys, you have to keep your mouth shut and play by the rules.” And in perhaps the episode’s most outdated reference, Samantha tells Carrie that her new love interest, Mr. Big (Chris Noth), is “the next Donald Trump” (and she means it in a good way).

Despite these backward-seeming lines, Sex and the City was considered progressive when it aired 20 years ago. “The heroine cultivates an anti-romantic pose that suits Manhattan in the ’90s,” critic Caryn James wrote in The New York Times the day before the first episode premiere. “For newcomers, be warned that Sex and the City isn’t for everyone; with its somewhat taboo topics and frank sexual dialogue,” Earl Cressey wrote in a review for DVD Talk. “However, those not easily offended should give it a spin; you will find an enjoyable and refreshing new comedy series from HBO.”

Perhaps viewers were accustomed to shows like Friends and Seinfeld where friends living in New York City only discussed sex with oblique innuendos. On Sex and the City, however, sex and relationships are integral to the identities of the characters: Samantha loves casual sex; Carrie’s constantly searching for Mr. Right; Miranda’s a cynic; and Charlotte’s a naive romantic. But having sex and liking it is the one thing they all have in common.

I was 8 when the show premiered, but I did occasionally catch it on my parents’ TV during my teen years. I remember feeling so validated by Samantha’s unapologetic sexual expression. She let me know I wasn’t alone in a world where nobody reassured me that it was normal to have sexual desires. The way she picked up men taught me women could make the first move, and lines like “When I RSVP to a party, I make it my business to cum” taught me that I should get as much pleasure out of sex as my partners. All of the characters, in fact, helped me understand that women should enjoy sex, even as my peers spoke about it as a favor that women perform for men.

Unlike most TV sex scenes, which tend to only show the characters’ upper bodies and cut out at the moment of penetration, Sex and the City showed the women’s pleased faces and sex noises. And when their partners didn’t give them what they wanted, they did something about it; Samantha confronts a guy about his “funky spunk” and Charlotte breaks up with a bad kisser. I even delighted in Samantha peeping on her neighbor Dante (Gilles Marini) as he showered outside in the 2008 movie, reversing the movie trope of the man who stumbles upon a naked woman and can’t stop staring by showing Samantha ogling Dante as he sensuously soaps himself.

Even now, it’s rare to see nude male bodies onscreen, especially ones that are being eroticized. But when I began watching old episodes of Sex and the City in college, I realized that I have mixed feelings about the show’s approach to sex. Season 3’s “Are We Sluts?” episode in which Miranda grows concerned about the number of people she’s slept with after learning she has chlamydia and calls herself “a big, dirty, diseased whore,” seems sex-negative in a time when some women are proudly self-identifying as “sluts.” Nowadays, many women are challenging the notion that there’s anything “masculine” about wanting casual sex or “feminine” about wanting a relationship. Labeling openly sexual women “like men” detracts from this fight.

In hindsight, Sex and the City’s race problem is also glaring. All of the main characters are white, straight, cisgender, able-bodied, and doing well financially (though it’s unclear how Carrie could afford Manolo Blahniks on a writer’s salary). Most of the supporting characters are also white, straight, and well-to-do with the exception of Stanford Blatch (Willie Garson), Carrie’s stereotypically gay friend, and Anthony Marantino (Mario Cantone), Charlotte’s gay wedding planner. When non-white people appear on the show, it’s usually to recenter the identity of the main character rather than an attempt to accurately portray the people who inhabit New York City.

When Samantha begins casually dating Chivon Williams (Asio Highsmith), a Black music executive, she and her friends immediately discuss his race. Carrie even jokes that their relationship is a symbol of affirmative action. Later, when Samantha tries to tell her friends that Chivon has a big heart, Charlotte cuts her off and says, “Black cock. We know he has a big Black cock.” Their relationship ends abruptly after Chivon’s sister, Adeena (Sundra Oakley), confronts them in a club because she’s uncomfortable with her brother dating a white woman. Their quick romance shows that the white ladies of Sex and the City aren’t part of the same world as Black New Yorkers but are willing to fetishize their bodies.

Not much changed for the show between 1998 and 2010, when Sex and the City 2 got called out for its racist depiction of Abu Dhabi. Samantha refused to dress in a way that respected the culture, and Carrie declared that “the veil across the mouth freaks me out.” In another scene, the women wore veils to disguise themselves, and then Carrie exposed one leg to get a cab driver’s attention.

The white ladies of Sex and the City aren’t part of the same world as Black New Yorkers but are willing to fetishize their bodies.

The show reeks of ageism as well. In “The Man, the Myth, the Viagra,” Samantha dates a man she assumes to be in his 70s for his money, but then leaves him once she realizes he has “the ass of an older man.” This not only exploits a tired stereotype of women being after money while men are after sex, but also perpetuates the belief that older people’s bodies are repulsive. Sex and the City wasn’t immune to transphobia either. In “Cock-a-Doodle-Do,” Samantha complains that her new neighborhood is “trendy by day and tranny by night” because transgender sex workers populate the area at night. Carrie describes the “transsexual hookers” keeping Samantha up at night as “half-man, half-woman, totally annoying.”

And for a show that aimed to push the envelope around sex, Sex and the City presented a surprisingly narrow view of sexual orientation. In “Boy, Girl, Boy, Girl,” Carrie leaves a bisexual man when she realizes she can’t fit into his “Alice-in-Confused-Sexuality Land.” She tells her friends that bisexuality is a “layover on the way to Gaytown,” reinforcing the idea that bisexual people are just going through a phase.

That’s a far cry from the way TV broaches bisexuality now: The Bold Type, a Freeform comedy-drama about three young women working in New York City’s magazine world, features a same-sex romance between Kat Edison (Aisha Dee), Scarlet Magazine’s bisexual social-media director, and photographer Adena El-Amin (Nikohl Boosheri). When Kat tells her friends that she has feelings for Adena, they encourage her to pursue the relationship—a stark contrast to Sex and the City’s Miranda, who says that Samantha dating a woman is like someone waking up and saying “I’m a fire hydrant.”

On Broad City, protagonist Ilana Wexler (Ilana Glazer) proudly proclaims to her hookup buddy, Lincoln (Hannibal Buress), that they are “poly” and “bi.” She also gets excited when another hookup tells her that he’s bisexual, and declares, “That is true masculinity.” And when she hooks up with another woman in the “Coat Check” episode, the plot centers around how much they look alike rather than her partner’s gender. On Girls, Elijah—who originally identifies as gay, but later questions whether he’s bisexual—is shown in realistic sex scenes with another man and with a woman.

The women of Girls and Broad City aren’t hyperbolic Samantha-esque characters because they have casual sex; instead, they’re presented as regular women with sexual desires. Abbi (Abbi Jacobson) and Ilana proudly use sex toys, unlike Charlotte, who worries that her vibrator will hurt her sex life. When Ilana wants to keep things casual with Lincoln, a three-dimensional Black main character with a successful career, she doesn’t worry about the consequences as Miranda does when she’s reluctant to move in with on-again, off-again boyfriend Steve (David Eigenberg). This situation makes Miranda so insecure about her femininity, she takes a “Goddess Workout” class and complains to Carrie afterward, “I’m never gonna be a girly girl.”

While Sex and the City, Girls, and Broad City center around white women and traffic in racial insensitivity, Insecure, an HBO drama about four Black women living in Los Angeles, goes further than Sex and the City in addressing racial issues. 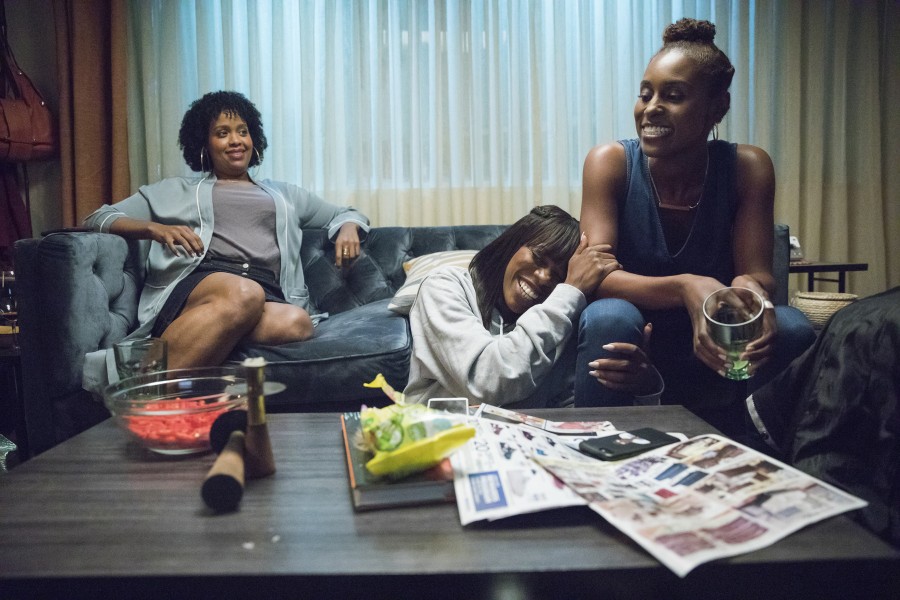 When Lawrence (Jay Ellis) is having sex with two white women, one tells him, “Your Black cock feels so good in my white pussy,” eliciting an uncomfortable expression on his face. It’s clear that Insecure’s offering a cultural critique, not a depiction of how things should be. Insecure also addresses political issues, including the wage gap and racial profiling, while the only Sex and the City episode about politics found Carrie saying she doesn’t vote and Charlotte going to a fundraiser to be “elected wife.”

Sex and the City started important conversations about sex, gender, and relationships, especially in a culture where openly enjoying sex was still taboo for women. The show made audiences think about sexual orientation, interracial dating, and age differences, albeit in problematic ways. Most of all, Sex and the City made people consider the possibility that women could, indeed, “have sex like men.” But these conversations are by no means finished. As ideas about gender and sexuality become less rigid and a more diverse array of perspectives are valued, TV should adapt to reflect this progress—and maybe even help open viewers’ minds.

If Sex and the City’s TV descendants have taught us anything, after all, it’s that there’s no such thing as “having sex like women” or “having sex like men.” The most important thing is simply enjoying sex.

by Catherine Scott
Sex and the City broke serious ground in the late ’90s when it was lauded for its frank and open discussions of sex—by...