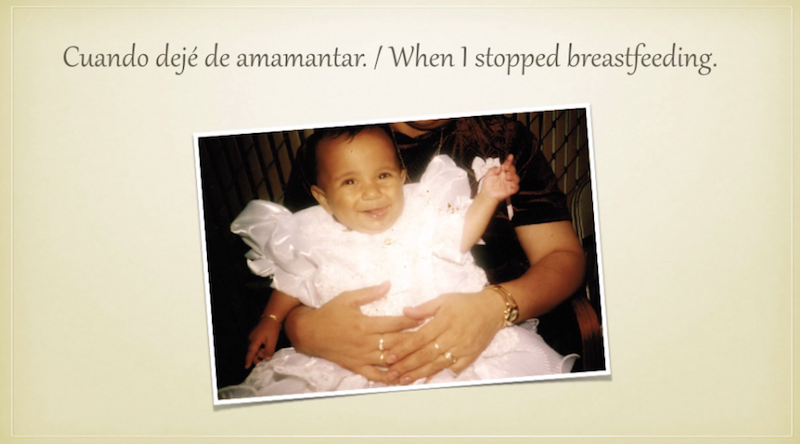 What is it like to breastfeed while in immigrant detention? Or to have your mom leave you at a young age because she needs to head across the border for work? These are two stories from a new oral history project documenting narratives of migration and motherhood. The project, Amamantar y Migrar, debuts for Mother’s Day this weekend, and it was put together by a Portland group of Latina and Indigenous immigrant parents who designed the bilingual exhibit to share their stories of migration and family. Millions of people migrate across borders during their lifetimes, but there is very little art and writing focused on what it’s like to be a parent during that experience. Amamantar y Migrar tells those stories through videos, audio narratives, and photos, which will be on display at the Latino Network in Portland all month.

“My hope is that, by hearing my story and those of others, immigrants and nonimmigrants alike can learn to see us as human beings, as people with values, dreams, hopes, struggles, goals,” says Anabertha Alvarado Martinez, a participant in the project. Amamantar y Migrar gave us permission to share two videos of mothers telling stories of pregnancy, breastfeeding, and the migration experience. The videos are in Spanish, so English-language transcripts of their stories are below each video. This week, for Mother’s Day, take a few minutes to hear these intimate stories of their lives.

My mom made the decision to move to come to the United States, to immigrate because of work and some other problems that she had in Mexico that we really don’t know much about. But at the time, we didn’t know what was happening, and my mom had to make the very difficult decision to leave us, to leave us there. And she didn’t tell us a thing.
So she came here and brought with her my youngest sister because she felt that if she left her behind, she would get depressed because she was still really attached to her. We all slept together in the same room, the four of us all grew up together, always sleeping together. And, well, she left. I just remember that we woke up with lipstick marks on our cheeks, and after that, we didn’t find out what had happened with my mom until they told us that she had gone to the United States. It was just nine months that we were there in Mexico. But when you’re a child, nine months felt like nine years. It was really hard, but my mom had her reasons and she did everything possible to make sure that we could come live here.
My grandma brought us as far as Tijuana. And from there we met up with some of her relatives. We were there a few days when, suddenly, we realized that they were going to cross us over to the United States. Some strangers were going to take us across. At the time I thought they were people that my grandma knew, that my mom knew. But later we found out that they were actually total strangers. No one in the family knew them. They were just people they had hired.
It was a family that took us across in their van. And they were going to take us across together—my sister and I. But when they saw that we were bigger than they had thought, we weren’t both going to fit. So they passed one of us first, and then the other. And so we came here in the van, hidden in the backseat. And I just remember that when we crossed the line, I really didn’t know what was happening. They just told me, “Stay quiet. Don’t make noise.” And when we got to the part where immigration was, well, they had put a dog in the back of the van, and at that moment I got the urge to sneeze. But I thank God that I was able to hold back that sneeze—a sneeze so strong that surely if I had sneezed they would have found me there.
[Years Later:] It was a week, eight days, before my due date when I started having contractions. I didn’t know they were contractions. I didn’t know that what I was feeling were contractions. Nonetheless, I decided to call the clinic. And when I told them, they said, “No, don’t come yet.” But after a little bit, I was like, “No. It feels like this is it. This is the real thing.” So I called my sister, my mom. Everyone went with me. All of us were there, waiting for my baby. They were all part of the birth: my three sisters and my niece and my nephew, because they came along with their mom, and my husband and my mom. So we were all there for the whole birth.
My sister gave us the opportunity of having the beautiful experience of witnessing the birth of my first nephew. It was a wondrous thing, and I didn’t want them to miss out on the experience of watching my baby’s birth. My other sister also gave us the opportunity to see the experience. So we had always been there, and this would be the third time that we would all be together for our babies’ births. And it was super beautiful, because I had decided that I didn’t want them to give me an epidural, yet as hard as I tried, in the end I finally decided it would be better to have it.
I was already dilated, nearly eight-and-a-half centimeters, so it wasn’t even really necessary but, well, they had already given it to me. But it was fine, because it made me be totally present, together with my family, for my baby’s birth. And so I don’t regret having the epidural one bit, because it helped me to be present, to see it all. The doctor I ended up with was excellent. She showed me the placenta and explained to me what it was and what it was for. And my family—we were all there. It was so beautiful. Totally beautiful, being able to see my baby, and being there without feeling the pain. It was an unforgettable experience.
So beautiful. Realizing that you can love somebody so, so, so, so much. And that God gives you this ability to love someone in that way. And to have your baby there with you—it was strange, how right away they latch onto your breast, and to start breastfeeding them without knowing what to do or how to do it. But it was painful at first, because he didn’t really know how to latch onto the breast. More than anything, I feel it was my sisters who were guiding me, because they had had the experience, so they were supporting me. And also the nurse. The nurse helped me to do it correctly and so that it wouldn’t hurt.

My mom breastfed all of us. And she always told us that it was the best thing for us. She tells me that my dad would bring her milk—lots of milk—because he said that if she drank lots of milk, she would have more breast milk to give to her baby. They didn’t live together, but he took care of my mom. I met my husband and we got married. He started to change. He lived a life of going out with friends. He wasn’t working and there I was, pregnant with a baby. There wasn’t any money. Then, when my second daughter was born, we didn’t even have enough money to pay the hospital bill.
He came here, to the United States. I stayed in Mexico. I came when my daughter was 3 months old, because he didn’t send me any money. I struggled just to buy my baby milk. I tried to breastfeed, but since I didn’t get enough to eat, I didn’t have breast milk to feed my baby. We arrived here, I gave birth to my third daughter, and nine months after she was born, immigration agents showed up at my work. I was still breastfeeding my daughter. I would leave my breast milk for her with her caregiver. I didn’t feed her formula or anything, just my own breast milk, and I would drop off the bottles for her and go to work. That day, immigration showed up. And they took me away. I went to work in the morning. I dropped my baby off with her babysitter. And I took my other two kids to school. I was working and someone came up to me and told me, “Oh, Maria Elena, they’re asking for you in the office.” I open the door and as soon as I walk in, an immigration agent came up behind me.
And he says, “We’re Homeland Security. You’re arrested.” And I said, “What did I do?”
And he said, “Oh, we’ll tell you later.”
And I started to cry.
“Why are you crying?” he asked.
I told him, “I have three children and what hurts me most is my little girl. She’s just a baby.”
And he says, “Don’t worry. Who’s taking care of her for you?”
I said, “The thing is, she’s still nursing. I breastfeed her.”
It’s tough. I’’s tough, because he said to me, “Oh, really?”
“Yes,” I said. “She doesn’t take formula. She still doesn’t eat much food.”
And he said to me, “Don’t worry. There are good doctors. They’ll give it to her.”
They took me to the center. And that night, since I didn’t have my baby and I didn’t have my breast pump, my breasts became super engorged. They couldn’t bring the baby to me in there. I still had so much milk, so much. I had to bathe myself two or three times a day in the jail. I told them, “I have so much milk. I have to get rid of this.” And they said, “Put something on.” Because I was always so full of milk.
And they said, “But how can you have so much milk if your baby is already nine months old? It’s as if you have a newborn.” I said, “That’s just how I am. I don’t know.” They gave me extra pillowcases and let me use them to put on. And it was as if I were exercising, I was always so wet. I asked them to take me to the infirmary because I couldn’t take it anymore. I even had a fever. They asked me why. And I told them they had to give me a pill or something to stop the milk flow. Because my breasts were so hard. And I told them, “I’ve got so much milk, and I’m in a lot of pain, and I think I have a fever. That’s why.”
So they gave me pills; I’m not sure what they were. They gave me a pill every morning and every night so that I wouldn’t produce so much milk. So many mothers stop breastfeeding because they don’t want to do it anymore. Others of us have to stop because we are forced to. 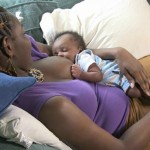 by adrienne maree brown
Breastfeeding changes the relationship people have to their nipples.