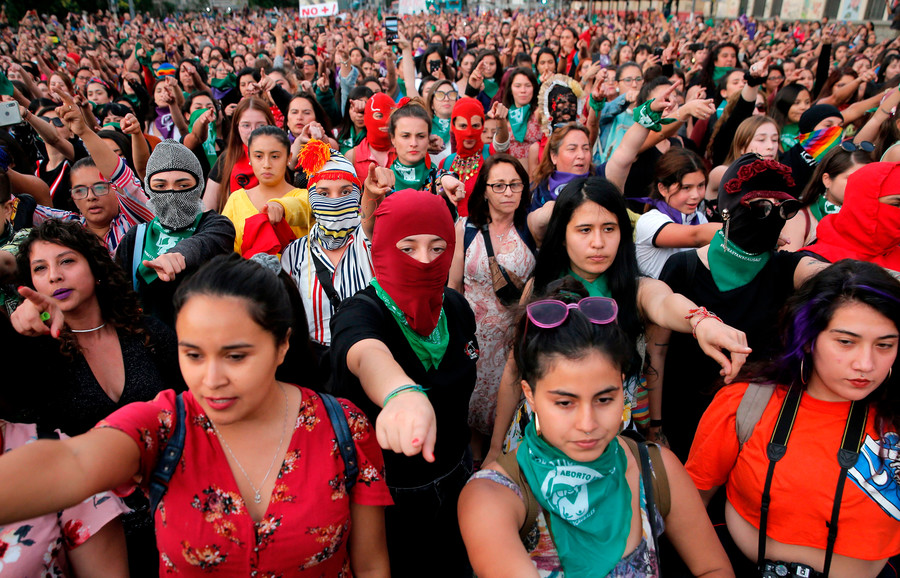 In Valparaiso, it started with a whistle. With women wearing green bandanas, some with black bands around their eyes to honor their comrades who’d been blinded by Chilean police. As they snapped into formation, adjusting their masks and stubbing out their cigarettes, the crowd whooped and clapped. And then it began. The sound of their chant was round and resonant, echoing in the hollow space between government buildings. El patriarcado es un juez… In English, we call them revolutions—to revolve, turn over only to arrive at something new and familiar all at once. In Chile, a proposed metro fare hike in Santiago was what tipped things over the edge, the final straw in a program of privatization and austerity. What started as a student protest quickly generalized into a wide-scale uprising, and just as quickly devolved into brutal repression by the Chilean state.

Patriarchy is our judge. The women’s chant pinballed around the globe, bouncing everywhere from the Zócalo in Mexico City to the wide boulevards of Paris. I find myself paying special attention to the places already in the headlines —the places where disaffection has become revolt, and where revolt is becoming social revolution. In Istanbul, riot police formed a line to disperse the women who had made their formation in the Kadikoy district, where dissidents had frequently gathered during the 2013 Gezi park uprising. They managed to perform a Turkish version of “Un Violador En Tu Camino” before being aggressively cornered by the police. The women pushed back, trying to hold their line. The police started snatching people from the crowd. In Erdogan’s Turkey, where dissidents are rounded up en masse, this was a humbling show of resistance.

Lebanese women staged a flash mob, performing the song in Arabic; one of the organizers of the action told The New Arab, “Because of the revolution, women from different social, cultural, and religious backgrounds joined together to demand protection for each other.” In Argentina, women performed a rendition of the song  at the Plaza De Mayo in Buenos Aires, where for decades mothers have flouted laws against mass assembly and gathered every Thursday to demand information about their children, who were disappeared by the government and erased from the public record during the Argentinian regime’s “Dirty War” throughout the 1970s and ’80s.

As we see waves of global revolt demanding a foundational change—a turning over of old, tired, inhumane ideas about how we live and relate to one another—women have made a direct address. The feminist revolt is a vivid bright spot in the global movement against the forces that stifle our existence—patriarchy and the oppressive state. Even eco-feminists have riffed on it. Much of the writing about “Un Violador En Tu Camino” treats it like a solid feminist treatise, which it is. But in hearing the lyrics, in reflecting on the context the song comes out of and the ways that oppressive state, bureaucratic, and economic structures affect women so deeply and personally, it is the critique—a clear, material, experience-based assessment of universal structures of power and what they do to us.

“El violador eres tu” is the refrain. The rapist is you. This is what the protestors chant as they point to the courthouse, the president’s mansion, the police. They chant it as they mime circles around their heads as if they’re holding invisible lassos. El estado. There’s something in these lines that takes the sexual violence women encounter, and the emotional weight they carry in dealing with bureaucracy, silencing, the search for their missing children, and mashes them together. If “rape” means to seize or take away by force, the rapist is you, they say.

In her influential 1992 article “Finding the Man in the State,” political theorist Wendy Brown detailed the ways our collective relationship with the state—the social compact that we’re inducted into at birth—mirrors patriarchy. She argues that the state, as an arbiter of public spaces, comes directly from  patriarchy, a relation of dominance that was born from the promise of protection. In legal terms, Brown wrote, public space—the street, the market, civil society—is under the jurisdiction of the state, while the private space—the home—has historically been under the purview of the man. Most “violations of privacy” historically come from the notion that the home is a private entity. Sometimes those legal concepts are used to defend the rights of marginalized people, like cases that challenged sodomy laws. But those beliefs also explain why wife beating was legal until 1920, and why it took until 1993 for marital rape to be criminalized in all 50 United States. Rape within intimate partnerships is still notoriously difficult to prosecute.

The oppressive state is a macho rapist, they chant. In renditions of “El Violador En Tu Camino,” the definition of rape balloons, expanding to encompass the ways power and choice is seized from us all. It is an anarcho-feminist critique of the state and the crushing violence it enacts on women and those who do not adhere to circumscribed gender roles, translated across cutures, continents, ages, ethnicities. Patriarchy has two faces: outright domination and condescending concern. The violation of our bodies has historically been justified under the auspices of protecting them. This is a narrative that women encounter everywhere there are women, that nonwhite men find everywhere they go. Sex workers endure everyone in a room talking about what would be best for them, except them. Pregnant cisgender women are abstracted into incubators for the lives they carry, lives that must be protected by force. Every time a police officer opens fire on an unarmed Black man, they are “protecting” the community.

Abusive relationships, street harassment, sexual coercion, and more are portrayed as easy fixes: Don’t wear that short skirt because it’s dangerous for you. Don’t lead anyone on. And, by the way, you don’t have final say about what you do with your body; that’s for others to decide. Violation in the name of protection is how Brown defines “prerogative power”: the authority to violate subjects in the name of protecting them, the purview of the military and the police on the street, and the man in the home.

The song is an anarcho-feminist critique of the state and the crushing violence it enacts on women and those who do not adhere to circumscribed gender roles, translated across cutures, continents, ages, ethnicities.

In the speech-turned-essay “Politics as a Vocation,” sociologist Max Weber theorized that the authority of the adult male emerged not from his role in the division of labor (hunting, providing food), but from his physical ability to dominate and defend the household against the omnipresent threat of rival “warrior leagues.” The subjection of women to the authority of the man of the house became a protection racket, a tradeoff: your protection for your subjugation. This mirrors the language of kingdoms and state, which implicitly promise us protection from our fellow citizens and from rival states.

“In this reading,” Brown writes, “the violence of the ‘state of nature’ is not overcome but reorganized and resituated in, on the one hand, the state itself as the police and the military, and, on the other, the zone marked ‘private’ where the state may not tread and where a good deal of women’s subordination and violation transpires.” In the public space, the man is endowed with rights—due protection from interference by the state. In the private sphere, he is judge and jury. Entwined with this legal structure is the idea that this is—and ought to remain— the natural state of things. But, as Brown points out, the male subject is oriented toward “self-interest and rights” rather than “family, relationships, and needs.” And so, her argument continues, how could the state penetrate the home to manage the needs of women when the whole system, by design, emerged from the self-interest of men?

As “Un Violador En Tu Camino” has echoed across the world, more attention has been paid to the accusatory pointed finger—the rapist is you—than to the harsh, dissonant last verse of the chant: “Sleep calmly, innocent girl, don’t worry about the thief. Over your dreams smiling and sweet, watches your loving cop,” invoking the image of an overeager, brutish male police officer, leering at the sleeping girl. Bogota feminists, meanwhile, tacked a new line onto their rendition of the song: “The state doesn’t take care of me, my girlfriends do.” When women participate in revolt, they face the extreme threat of physical and often sexual violence at the hands of the police. But women revolt when there are no other options, when we have seen impunity granted to our rapists in our homes, immunity offered to the police on the streets who violate in the name of protection.

If the world is to be transformed, we need to move from “self-interest and rights” to “relationships and needs.” The feminist answer to the fundamental question of humanity—how should we exist with one another?—is replete with answers. We know that we’re tethered to one another, that we could not exist without the many threads and entanglements that bind us. We cannot fully protect each other, but we can lavish care and love on one another to stave off the most bitter consequence of violence: the feeling of worthlessness. It is why women around the world can speak in unison, raising a new, singular voice that echoes outward. We can choreograph a dance and perform it alongside one another, and take the steps to the same beat.

Read this Next: Material Acts