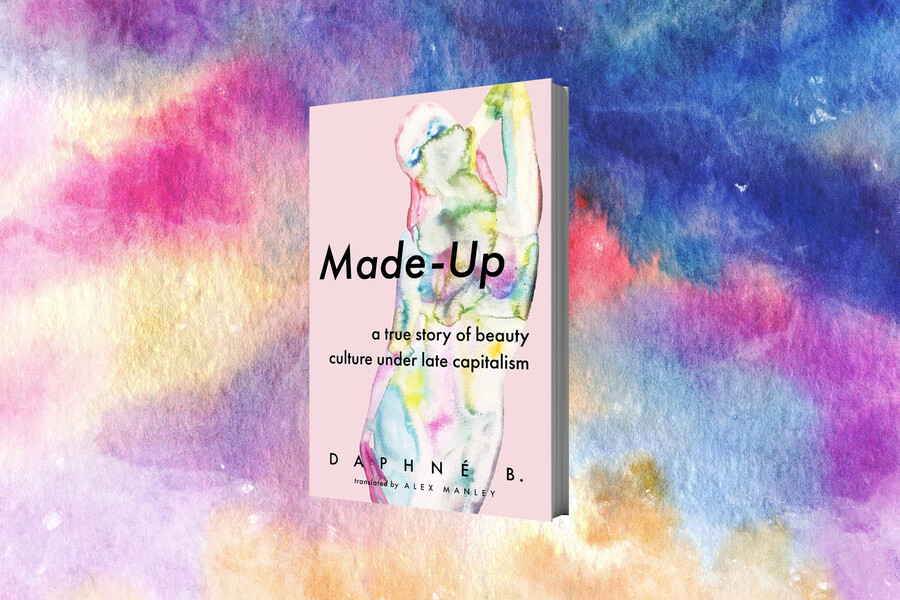 In Made-Up: A True Story of Beauty Culture Under Late Capitalism (Coach House Books), we first meet author Daphné B. in what seems to be her natural state: lying in bed, wearing a full face of makeup, perusing the Sephora website. She’s stuffing her virtual basket with two eye-shadow palettes, an eyeliner, and a bottle of retinol. “With the click of a mouse,” she writes, “a third of a month’s rent goes up in smoke.” It’s worth it, though, if only for the intoxicating suspense that comes with awaiting the delivery at her doorstep. “Opening little boxes,” she writes, has become her “raison d’être.”

B. is Extremely Online. She spends most of her evenings, and much of the book, “YouTubing down the rivers of my waking life” and “scrolling down the rivers of Instagram.” Her repetitive fluvial metaphors are instructive: B. isn’t surfing the web, she’s drifting down its tributaries. She experiences the internet not as a vast ocean but as a series of narrow and unidirectional pathways. For B., all rivers lead to beauty-related content: She watches endless makeup tutorials and unboxing videos, eager to “find the perfect product, that sacred merch.” The more she watches, the more she buys.

Throughout Made-Up (originally published in French, the book is out in English this month, translated by Alex Manley), B. examines the intersection of beauty culture and consumer culture. As an active participant in both cultures—she consumes the content and products that she writes about—she provides an insider’s insights that simultaneously self-implicate. While she considers the success of Kylie Jenner’s lip kits or the union of Grimes and Elon Musk, she must interrogate her own choices as well. Why does she spend so much time doing her makeup? Why does she find unboxing videos so soothing? Why does she watch tutorials compulsively?

Aided by the work of writers like Anne Carson, Anne Boyer, Amanda Hess, and Arabelle Sicardi, B. finds some answers. The time she spends on her makeup is a way to “escape the monetization of time”—to steal a quiet moment just for herself, to feel “a little closer to my body after a lifetime of ignoring it.” The consolation she gets from unboxings—that is, from watching a “product disrobe”—comes from “consumption by proxy,” the pleasures of witnessing a “joy” that she can “hold in my hands.” And as for the tutorials: “Sometimes, to feel at peace, all you need is for someone to tell you what to buy,” she writes.

She is also mindful of the financial forces that shape the makeup industrial complex. “In 2019,” she writes, “the cosmetics industry was worth an estimated $445 billion; by 2024, it’s expected to nearly double, to $800 billion.” The makeup business is so lucrative, she finds, that Jenner makes $19,000 an hour from her cosmetics line alone. B. is so eager to purchase a Conspiracy eye-shadow palette (then priced at $52) that she watches a web series in which the palette’s creators, two YouTubers, discuss the nuts and bolts of manufacturing it: “money, percentages, net and gross profits,” as well as the “$10 million they expected to make.”

But she’s far less transparent about her own finances, so it remains unclear how she maintains the constant level of consumption she describes. After she blows a chunk of rent money on Sephora, she estimates she has “spent over $1,000 on makeup this year.” Yet her financial situation seems somewhat precarious: she ekes out a living by doing “freelance translation gigs,” which are presumably not particularly lucrative, and later gets a sugar daddy through Seeking Arrangement. She describes feeling “forever on a money treadmill, trying to catch up to a living just out of reach,” but her shopping habits don’t quite support that narrative. B. soberly analyzes her relationship with consumer culture, but rarely asks how that relationship might be shaped by her own financial position—nor does she fully consider what makeup consumption looks like for those without $1,000-plus in disposable income.

Of the larger ethical issues B. raises in Made-Up, many prove intractable. What should we do, for instance, about the child laborers in India who mine the mica used in eye shadows? About the women’s prisons that callously prohibit beauty products? About popular beauty influencers accused of racism? She offers no easy answers because there are none. But her ambivalence feels less like a character deficit and more like a symptom of contemporary life. The individual’s power to affect change hasn’t increased along with the expanded consciousness that the internet affords. The average Very Online Person knows so much—arguably too much—about the world’s ever-expanding list of ills, but this knowledge doesn’t so much empower as paralyze. Sure, B. could stop buying products that contain mica. But amid continued demand, what tangible difference could her little boycott make for those children?

While Made-Up tackles such urgent questions, B.’s overall approach is more introspective than polemical. She takes stylistic cues from works like Maggie Nelson’s Bluets and Patricia Lockwood’s No One Is Talking About This. She’s anxious about wasting time online and afraid to “use up the wick of my life” by way of mindless scrolling. She’s skeptical of Instagram’s “aesthetic of control” and ambivalent about “growing old online.” She convinces herself that the self is perfectable (or, as Jia Tolentino would say, “optimizable”), and that “maybe if I’m cute enough, my life will take on a whole new meaning.” There’s always something new to try, another problem to solve, no finish line in sight—a feeling shared by many of us women who have grown up and are still growing up on the internet.

Much of Made-Up’s appeal hinges on this relatability, sometimes at the expense originality. But when she trusts her critical instincts, B. makes sharp observations about the ideologies behind both beauty (how physical artifice is tolerated only when it is “doubly false” by appearing “natural rather than flashy”; how normative beauty is a potent “socioeconomic marker,” while the desire to achieve it is dismissed as vain and frivolous) and consumerism (how the right product can feel like “a homecoming for the weary, errant consumer”; how buying someone’s product has become “an act of righteousness” or reparation).

Alex Manley is essential to such observations, not just translating but contextualizing. In one tactful footnote, Manley anticipates a potential site for confusion and delineates emotional labor from affective labor. Manley explains that the former, to which B. refers in the footnoted passage, is the historically feminized work of “generating or affecting the emotional experiences of others.” Since influencers and sugar babies—two kinds of practitioners of affective labor—feature prominently throughout the book, Manley’s insights here are indispensable.

Despite the book’s focus on artifice, B. is remarkably attuned to her emotional life. Early in Made-Up, she remembers her great-grandfather, who died in a horrific mining accident, then listens to the music of Raôul Duguay as she researches the region, Abitibi, where the accident took place. She tries locating a body of water mentioned in Duguay’s song “La bitt à Tibi.” When she fails to find Harmonica River on Google Maps, she imagines it instead, wishing she “could go float down it, […] maybe take a little nap in the riverbed, and rest up for a century or so.”

What should we do, for instance, about the child laborers in India who mine the mica used in eye shadows? She offers no easy answers because there are none.

When I read this, the moment conjured a lucid image, a tweet—perhaps you’ve seen it—that recently circulated widely. TV writer Caitie Delaney (Rick and Morty) shared a portrait she had painted. It’s a riff on John Everett Millais’s “Ophelia,” which depicts the eponymous character drowned in a river. “Except it’s me,” Delaney tweeted, “just vibing.” Delaney is pictured lying in water, rigid and slack-jawed like a dead Ophelia, clutching her iPhone and wearing sunglasses and AirPods. Instead of flowers, she’s surrounded by conspicuously branded products floating nearby: a plastic Target bag, a pack of Funyuns, a bottle of Advil, a sleeve of McDonald’s fries, and, naturally, a pink pouch of Glossier makeup. I imagine B. in this same scene, taking her little riverbed nap, in some idyll where cool river water kisses the surrounding flora, orbited by all of the shit she’s ever bought, forever tethered to the brands and the products that keep her (us) whole.

Do you remember what Hamlet says to Ophelia before she dies? “God hath given you one face, and you make yourself another”—classic Shakespearean double entendre that refers to Ophelia being two-faced and to women who use makeup. (There’s a makeup brand called Too Faced; I wonder if B. has ever tried it.) The author contends with this spite throughout Made-Up—the distinctly male distrust of the made-up woman, the insistence to “take her swimming on the first date,” that she’s hiding, as B. writes, a “true essence” beneath her cosmetics. But to B., the vanity in her bedroom is an altar where she can connect with her truest self. Before her mirror, surrounded by products, she enters “a kingdom of brushes, cotton swabs, and tiny jars that smell so sweet—a sacred space where I feel like a fledgling bluebird, forever learning to fly.”

Read this Next: “Mayday” Is a Brutal, Irresistible Feminist Revenge Fantasy 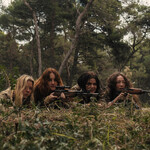