The Uncomfortable Violence of The Hunger Games' "Mockingjay" | Bitch Media

The Uncomfortable Violence of The Hunger Games' “Mockingjay” 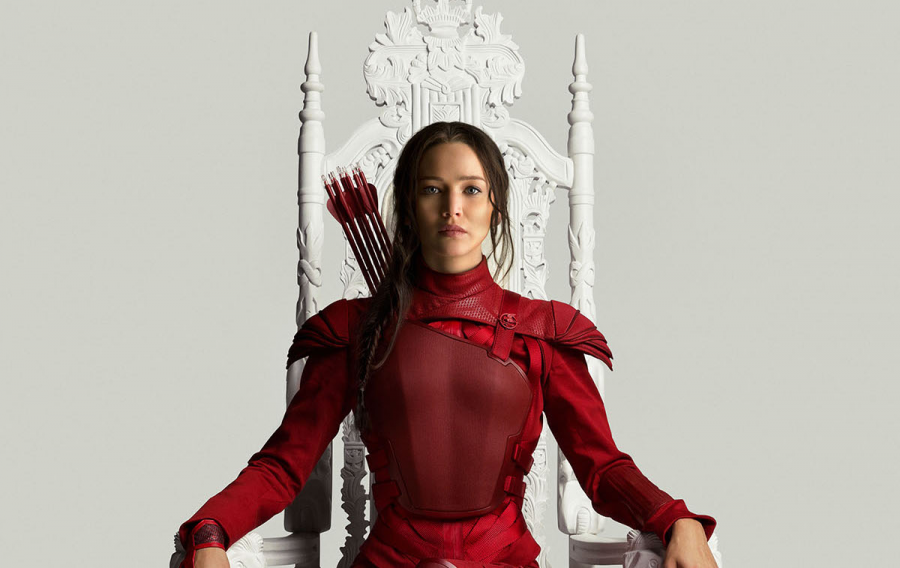 At long last, The Hunger Games has come to an end on the big screen. I admit, I almost expected Mockingjay, Part 2 to halt midway through and announce that “Katniss Everdeen will return in…” al la James Bond. The smash hit is definitely an indicator of the rising bankability of female stars—the films proved a tipping point for Jennifer Lawrence, who has gone on to insist for fair pay while also resisting the typecasting that many actresses are wedged into once they’ve performed in action franchises. Hollywood is slowly learning that women go to the movies, and they have rising expectations—fewer sexist Bond girls, more Furiosas.

But something about Mockingjay felt off for me. It may have been the unfortunate timing of the film. Just one week before the movie premiered, 130 people died in horrific terror attacks in Paris perpetrated by Daesh. As Daesh penetrates what remains of Syria along with Afghanistan, Iraq, Egypt, and other nations, it promises to be bring about a revolution. Perhaps going to see a film about violent overthrow and revolution wasn’t the best decision in the wake of the recent attacks, as Mockingjay’s scenes of bombed-out cities and people cringing at the sound of air raids felt painfully real and not very entertaining. Mockingjay is the blood-soaked conclusion to the series that centers on Katniss Everdeen (Jennifer Lawrence) as the reluctant figurehead of a rebellion against the lavish ruling class of Panem, a nation of oppressed districts held together by the iron hand of President Snow (Donald Sutherland). The tactics on both sides of the rebellion tend to be merciless. In one climactic scene, refugees crowding at the gates of the palace—sound familiar?—are bombed from overhead, drawing in a flood of medics and soldiers to help at the precise moment a second bomb falls. It was a tactic discussed by the revolutionaries, and one, Katniss implies, that they deployed themselves—using the civilian casualties to turn the tide of public opinion against Snow. Though they’re meant to be critiques of violence, visceral scenes like this left a sour taste in my mouth. As Turkey shut its borders to all refugees and Belgium remained in lockdown, I was sitting in a dark theater watching strangely clean and well-equipped revolutionaries making their way to the heart of a city to take out a corrupt dictator.

There is a strange teeter-tottering balance when it comes to telling stories like these. Mockingjay, Part 2 was clearly and unequivocally being told as a commentary against violence, and was at times even heavy-handed in its condemnation of totalitarianism and nationalism. The games themselves are an ubsubtle dig at modern society’s obsession with violence as entertainment. At the same time, the blockbuster franchise hinges on the fact that revolution sells. Here in the West, we glamorize violence, and The Hunger Games joins in that tradition even as it attempts to refute it. The promise of action-packed revolutionary drama sells movie tickets and sloganeering t-shirts alike. Violence should be viewed as a grave last necessity, a resort that people turn to only when all other options have been exhausted. As Katniss vainly tries to tell her fellow revolutionaries, violence should be a tragedy. This anti-violence and anti-consumerism message feels at odds to the reality that we’re consuming it in the form of a Hollywood film that raked in $101 million on opening weekend. While Americans are filling theaters to cheer on Katniss’s revolution, our country seems increasingly willing to turn its back on refugees who are fleeing real-world violence. 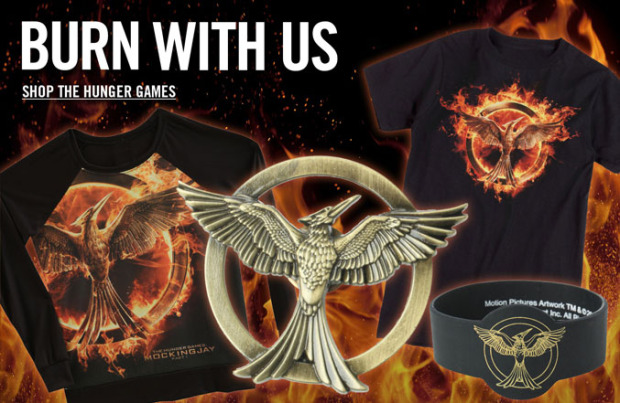 At Hot Topic, you can purchase “revolutionary” t-shirts and bracelets.

The line between terrorist and freedom fighter can be a thin one, and so can the line between a character taking control of her autonomy to buck stereotypes and one sliding into “just one of the boys” territory, usually via violence. It’s a story that’s been told before, and will be told again, in a myriad of different ways. In this case, it’s even a well-told story, with a puppet figurehead realizing how she’s being used and lashing out, angry about the deaths occurring in her name and the hijacking of her very person. Katniss spends much of the franchise without any autonomy, from being dumped into the hunger games originally to being ordered to stay behind the front lines as an asset too valuable to use in real fighting. She spends much of the franchise fighting back, too—refusing to be killed in the games, disobeying the rebellion’s leadership, and speaking out to demand that people stop killing each other and focus their energies on President Snow. There’s a great deal to love about Katniss as an inspiring and dramatic figure, but the sight of an asymmetrical campaign of violence as something to admire struck a tad too close to the bone.

At the end of the film, we see Katniss and her young family in a field, all flowers and soft lighting, an image of domesticity that contrasts sharply with the gritty darkness of the rest of the movie. For some, this might represent a fall for the action heroine—cradling an infant instead of a quiver, wearing a loose dress instead of practical fatigues—but instead, it’s in a way a commentary on what society values and what it doesn’t. As a revolutionary, Katniss is a brave and impressive figure. As a mother, she’s just as strong—mothering itself is revolutionary—but the scene has a sense of literally and figuratively putting her out to pasture. Your work here is done, the scene implies, and so too is your value and interest as a human being.

“Did you have a nightmare?” she asks the baby as it begins to fuss. “I get them sometimes too.”

This article completely forgets that these udeas came from books. The movies exist as a separate medium in which to consume the story of Katniss Everdeen and her Hunger Games, but there is no irony here, in relation to the messagethe movie carries and how that message is being consumed by the masses.

There's a lot to critique in the adaptations.

Whitewashing. Erasing some of the class narrative. Erasing pretty much all the race narrative. Ablewashing Peeta. Ablewashing all the victors, really (Book!Katniss was NOT that well adjusted). The ridiculous marketing tie ins. All ripe fruit for the critiquing.

The books were more violent than the movies. They toned down a lot of the violence. In books that show war to indicate that violence is awful (among other messages, which are clear if one examines the source material).

I'm disappointed in this under informed analysis.