This is what mainstream media’s decisionmakers look like. Basically all of them. Triplets!

The past month has been an eye-opening lesson in corporate media fuckery.

First, there was the fiasco with Bustle. Yes, they tried to nick our name, but more important, they tried to trick you by enticing readers to join a thinly veiled “exclusively inclusive” market research club.

Then there was MTV, which seemingly restructured their entire news department and laid off some of the most brilliant writers in the game because they wanted to “pivot to video.” Curiously, the move came shortly after Facebook announced its algorithm was shifting to favor videos over articles. Unrelated? I doubt it.

But if you’re still not convinced, there’s also the case of the New York Times layoffs. First, the news org’s public editor was let go; a few weeks later, a large portion of their copy editing team was 86ed. But climate-change deniers? Sure! Have a byline! Who needs facts, truth, and copyedits these days anyway!

Nothing matters as much as advertising revenue. And when the value of media is measured in potential revenue rather than potential impact, everyone loses.

What would it say about Bitch Media as a feminist organization if we were duped into using the same measures of success or modes of funding as the very systems we aim to subvert?

That’s why Bitch’s financial and editorial independence is at the core of everything we do, and everything we will continue to be able to do; because we don’t have advertisers or investors pulling any strings, and we never will.

All of this is to say something very important:

Back in May, we missed our membership goal by a margin, small by most measures—but not for an independent outlet like Bitch. For us, $20,000 isn’t the difference between a keg of beer or nice champagne on Fridays. It’s the difference between staff hours, funding our writing fellowships, magazine-paper quality, and being able to afford to podcast guests.

If we want to get back on track for the rest of the year and not make cuts starting immediately, we have a narrow window between now and July 31 to set things straight.

So we need to raise $20,000 in new B-Hive memberships, subscriptions to Bitch magazine, or one-time donations by Monday, July 31 to ensure that Bitch Media can continue to operate at full capacity for the rest of the year.

There’s a reason we set such an ambitious goal back in May, and a reason we’re putting it all out there again to try to reach it anyway in July:

Calling out Bustle and actually winning? We were only able to do that because our community had our backs. Just like everything we do here, it doesn’t happen without you.

Let’s finish what we started. You can help us make our $20,000 goal by July 31 by joining the B-Hive, subscribing to Bitch magazine, or making a one-time donation. Every dollar ensures that Bitch continues to be the fearless outlet you know it to be.

Can we count on you?

Relevant: You’re Getting Hustled By Bustle 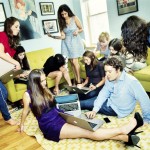 by Bitch HQ
We’re not too thrilled that Bustle jacked the name of our monthly giving program, but there’s more.