Feminists Have Been Fighting for Universal Childcare for Decades | Bitch Media

The Long Feminist History of Fighting for Universal Childcare 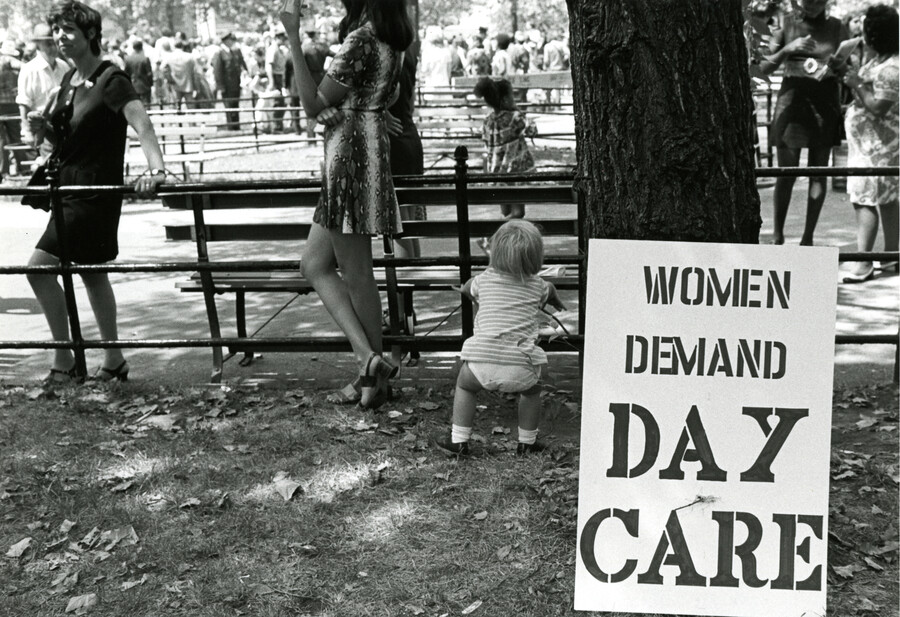 Thanks to the global pandemic that has upended family routines and divisions of labor, childcare is now a talking point on the national political stage for the first time in a long time. In a recent campaign video, presidential candidate Joe Biden emphatically mentioned childcare as a need of working families that’s not being adequately met. “We have to change the way in which we deal with allowing people an opportunity to make a living,” he said. “That includes childcare.” That he mentioned childcare at all is a testament to how the pandemic has laid bare what has always been true: Families need access to affordable childcare in order to effectively function. Biden’s eagerness to talk about childcare is likely thanks to his former fellow candidate Elizabeth Warren’s refreshing awareness of and attention to this issue; she’d unveiled her plan for universal childcare well before the pandemic hit. New attention is also being paid to universal childcare, thanks to mothers sharing their experiences of attempting to work remotely as they balance childcare responsibilities with job demands.

It was a stressful reality before the pandemic, and it’s literally impossible to juggle all of these competing priorities now. This “balancing act” narrative has been central to the feminist movement since at least the 1970s, when an array of related and aligned movements for women’s liberation pushed issues like childcare, reproductive justice and health, and workplace equality into the national spotlight. And yet as I grew up in the ’80s and ’90s and learned about women’s liberation, I never heard about childcare being an essential part of the movement. Instead, the popular public narrative around parenting and feminism was—and continues to be—the now-tired cliché of “having it all” or whether it’s possible for women to balance parenting with their careers. The idea that access to quality, affordable childcare might mitigate the severity of walking this tightrope has remained obvious to feminists, especially those who are focused on reproductive justice. But it has rarely been part of the mainstream conversation about feminist policy aims.

However, there was once a time when the right to childcare had top billing for a generation of feminists. In a 2010 article for Law and History Review, legal historian Deborah Dinner explained how childcare, framed specifically as a basic right owed to women, was a unifying issue across feminist identities of the ’70s, bringing together various grassroots campaigns. She writes that raising “rights consciousness” around childcare “encouraged working-class and middle-class, African American and white, radical and liberal feminists to identify shared policy interests and to form coalitions on both the local and national levels.” For middle-class white feminists, the universal right to childcare expressed their dissatisfaction with gender and family norms that forced middle-class women to take care of children at home. For Black feminists, the universal right to childcare disputed the common cultural narrative that blamed Black mothers and Black families for systemic poverty. For that generation’s welfare rights activists, these arguments protested the way government-sponsored childcare was available only to those living below the poverty line, and how it was used as one of many tools to surveil and control the lives of welfare recipients.

Then, as now, childcare was an issue that mattered deeply to women across class and racial lines. Feminist organizing around the right to quality childcare for all women led feminist activists to lobby for and cocreate the Comprehensive Child Development Act (CCDA) in 1971. Though the bill didn’t offer universal childcare, it sought to expand Head Start to include a network of community centers that would’ve provided childcare, medical care, and nutrition to families on a sliding scale. It also left the door open for expanded legislation that could eventually include all U.S. families. Senator Walter Mondale, who later served as Jimmy Carter’s vice president, cosponsored the CCDA, which passed both the House and the Senate—but President Richard Nixon vetoed it. Nixon was following the guidance of his then-staffer Pat Buchanan, who would become one of the most prominent voices of family-values conservatism in the decade that followed. Nixon offered strong language in his denunciation of the bill, writing that he wouldn’t commit “the vast moral authority of the national Government to the side of communal approaches to childrearing over against the family-centered approach.”

Conservative columnist James Kilpatrick went so far as to say that the legislation was part of “a far-reaching scheme for the essential Sovietization of the American family.” In retrospect, some have theorized that childcare wasn’t a priority for American feminists in the way it was for their European counterparts, who saw motherhood and parenting as a special circumstance requiring special legislation. This distinction may exist between the continents, but there’s no question that feminists in the United States want childcare-focused policies. Before Nixon vetoed the CCDA, the National Organization for Women—perhaps one of the most powerful and mainstream feminist organizations, though it has recently been embroiled in controversy—listed 24-hour childcare as one of its demands. It was Nixon’s veto that politicized the issue, creating the foundation for conservative attacks on the goals of women’s liberation that still persist today. Nixon and the conservatives who opposed the CCDA drew a boundary between “communal” and “family-centered” approaches to childrearing.

Though this language is rooted in the antagonisms of the Cold War, this boundary has outlasted our obsession with Soviet communism, living on in the ways our social policies align “family” with the absence of government institutions and intervention. After Nixon vetoed the CCDA, its congressional sponsors attempted to redesign and pass it in 1973, but an overwhelming wave of backlash from conservative civilian groups halted its progress. These groups propagated conspiracy theories by pamphlet and flyer, claiming that the childcare centers the bill proposed would lead to the unionization of children, who would be raised by the state to buck their parents’ demands and values. Many of these groups, including Oklahoma’s Women Who Want to be Women, were women-led, and they continued to influence the ’80s right-wing narrative that privileged the image of a patriarchal, nuclear family unit and demonized forces, like daycare, that might act on children outside of the family. These fictitious narratives became central to the rise of the Christian Right.

Progressives, activists and politicians alike, should embrace universal childcare as a powerful tool for supporting families, so that quality care is equitably distributed and childcare workers (many of whom are also parents) are protected and paid well.

The erasure of childcare as a feminist agenda point has had various consequences, but most profound has been the abysmal options offered to both workers and parents by the private childcare industry since Nixon’s veto. In considering the obvious need for universal childcare, I find myself reflecting on the demand for 24-hour childcare, which now feels unimaginably ambitious as a policy goal. And yet it isn’t an overestimation of what parents, particularly those in single-parent households—the vast majority of whom are women—really need. That old tension between “communal” and “family-centered” deserves revisiting, because when it comes to childcare, the nuclear family is not enough. A recent episode of the podcast Intercepted, guest-hosted by progressive activist and writer Naomi Klein, explored the idea that COVID-19 and its aftermath may allow us to “escape from the nuclear family” and reimagine our family structures. Klein’s episode focused on the inefficiencies and deprivations of the single-family home at this unique point in history.

“In a pandemic that confines us to our homes for work, school, and leisure, the single-family home is a really bad technology,” she said. Klein also interviewed members of a multiple-family living structure who extolled the benefits of their living arrangement, particularly when it comes to sharing childcare duties. Of course, any reenvisioning of the nuclear family must also reassess the role of men and fathers in providing childcare. Women in heterosexual households still do the bulk of domestic work, including childcare, even when both partners have full-time jobs. That this work is done largely by women has contributed to both its invisibility and to the lack of support for it as a public good. As I write this, my friends with children are creating their own makeshift childcare arrangements for the fall—many of which must, by necessity, be communal—in an environment where many still work from home, and where schools and daycare centers may not be fully open, safe, or available for the foreseeable future. Progressives, activists and politicians alike, should embrace universal childcare as a powerful tool for supporting families, so that quality care is equitably distributed and childcare workers (many of whom are also parents) are protected and paid well. We have a unique opportunity right now to reimagine our approach to caring for young children, as much a feminist issue today as it was in 1971.