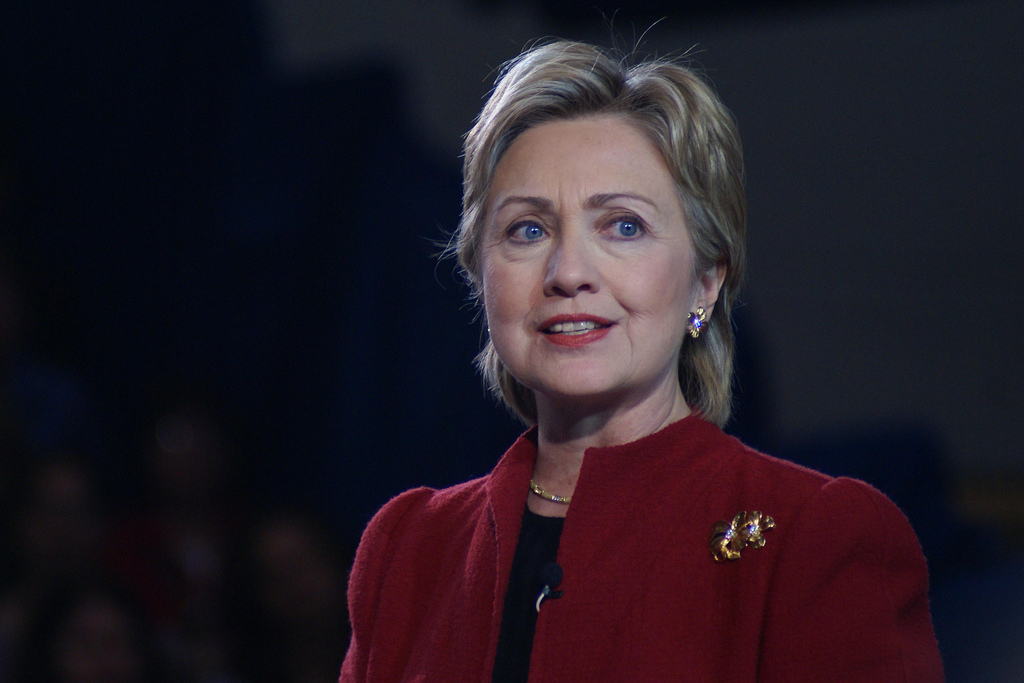 This is an excerpt from Love Her, Love Her Not: The Hillary Paradox, edited by Joanne C. Bamberger, which comes out from SheWrites Press this month. Photo of Hillary Clinton by Marc Nozell.

If Hillary Rodham Clinton is to successfully shatter the now-infamous glass ceiling for women presidential candidates, she will need to grab a sledgehammer from her “privilege knapsack.”

That knapsack that holds so many of our unconsidered privileges, such as white privilege and class privilege, that color our perceptions. Hillary’s bag holds the mighty sledgehammer that she requires to smash her way into the White House in her own right, and get the votes of women who don’t carry that same knapsack, by taking a swing to break down some inherent problems in her well-intentioned family policies.

While Hillary and her entourage of consultants may think that the key to a 2016 White House victory is reestablishing the Democratic Party with white men, I contend that for her to succeed, she must win the hearts of low-income women and women of color. In 2008, President Obama not only overwhelmingly won over African-American (95 percent), Latino (67 percent), and Asian (62 percent) voters, but he also triumphed with the majority of voters who earned less than $50,000 a year. As a Latina, I know that in order for Hillary to win us over, she needs to spend some quiet time with her privilege knapsack and show voters in those groups more respect. Sadly, she doesn’t have a great record of doing that.

Don’t get me wrong—I admire Hillary. I was born in her hometown of Park Ridge, Illinois. We both grew up root-root-rooting for the Chicago Cubs. We both centered our careers on the empowerment of girls and women. But I learned that empowerment is a complicated thing.

In the summer of 2013, I attended the annual Clinton Global Initiative conference in Chicago. I was eager to hear Hillary speak in person.  Hillary’s speech that day about the need to educate girls and women around the world as the solution to global poverty struck the crowd as common sense. We clapped as she rattled off idea after idea. How difficult is it to suggest that simple basic education of girls is a good thing? How could we ignore the economic and health benefits of educating girls? All of her ideas seemed so easy, so obvious.

Then she got to the health of pregnant women and newborns, and said, “How do we make sure that pregnant women, particularly poor women, understand the nutrients they should take to support their own and their baby’s health?”

On the surface, it seemed like an innocuous and non-controversial statement. But that’s the privilege talking. My issue with her quote, and any future ones like it, is that it assumes ignorance as the reason for the lack of healthy prenatal care and subsequent issues with newborns. If she wants to win the support of lower-income women, I would ask Hillary to look past this first layer of “Why?” and dig deeper into the larger issue.

For example, for those of us with certain privilege, having a family doctor and being able to make medical appointments for ourselves and our kids is a given. But for many Americans, that’s not the case, and Hillary knows that. But if you can even get access to a doctor, the next obstacle is finding the time to see a provider on your work schedule. Hillary once served on the board of Walmart, so she should know all too well that in most working-class jobs, one’s schedule is not always known well enough ahead of time to plan a prenatal visit, much less handle well-baby or sick visits.

I am ready for Hillary to tackle schedule flexibility.

I am ready for Hillary to tackle paid sick days.

Hillary also needs to dig around in her political knapsack when it comes to talking about nutrition in low-income communities. A vital part of good prenatal care is a healthy diet full of fresh vegetables and fruit. Hillary surely knows of the lack of access low-income people have to fresh and healthy food not only in our nation’s big cities, but also in our rural communities. And then there are the families who do have access to grocery stores that sell fresh fruit and vegetables, but who rely on WIC grants and food stamps that are continually on the budget chopping block from the Congress. Sometimes the best decision is to buy food that is affordable and will last until the next paycheck, but that’s not necessarily the healthiest.

I am ready for Hillary to tackle food insecurity.

The last item from Hillary’s knapsack that she needs to reassess is the state of birthing and breastfeeding in the U.S. According to the Institute for Women’s Policy Research, 87 percent of American women don’t have access to paid maternity leave, meaning that they must return to work as soon as possible after they’ve used whatever paid sick or vacation leave they do have. Yet the high rate of Caesarean sections is in direct conflict with quickly returning to work since that surgery requires four to six weeks of recovery time.

The lack of paid maternity leave also has a negative impact on a new mother’s ability to get into a habit of breastfeeding, which has proven health benefits for infants. For me, it took a few weeks of trying before my daughter and I got the hang of things. It is far from the most natural thing that a woman can learn. Rushing back to the workplace after having a baby can impede a woman’s attempt to breastfeed her baby.

I am ready for Hillary to tackle paid maternity leave.

I am ready for Hillary to tackle the medicalization of birthing children.

Hillary Clinton is a long-time advocate for women and children, but I know I’m not the only one ready for her to really examine her positions on these policies. If Hillary can flip her frame of reference to see low-income women in the U.S. as already empowered, but lacking in the ability to act on their knowledge, her messaging can be tweaked in a manner that will attract more low-income women and women of color to her candidacy.

For more perspectives on Hillary, pick up Love Her, Love Her Not: The Hillary Paradox, edited by Joanne C. Bamberger.

Relevant: 9 Moments That Gave Us Hope This Year