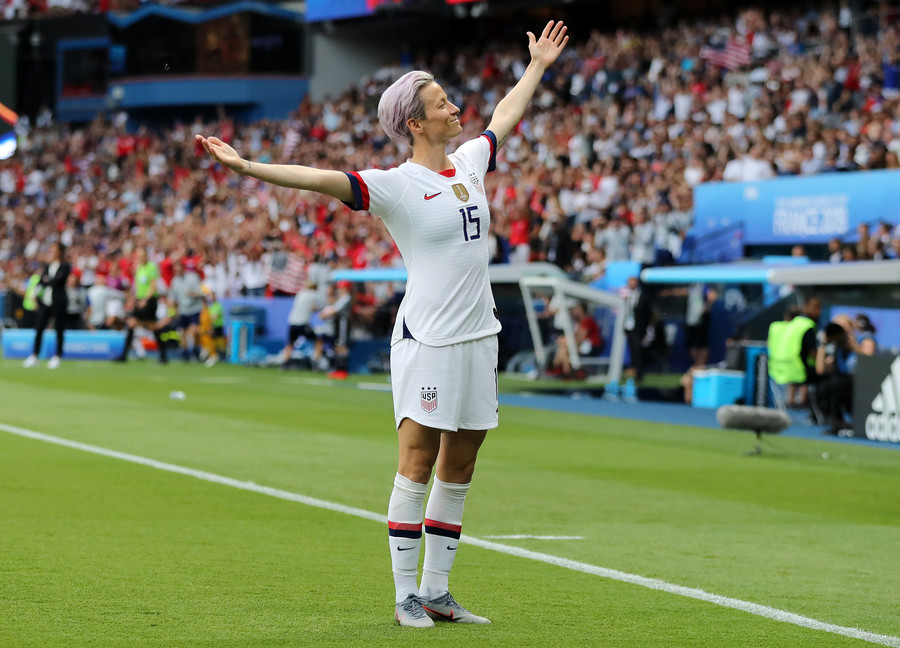 There are many versions of this world in which I’d never follow the United States women’s national soccer team not because they’re a women’s team, but because sports don’t hold space in my life. But since queer and lesbian meme accounts became obsessed with the U.S. Women’s World Cup, it has become impossible for me as a queer woman not to follow the event. As I like and share memes, I find myself analyzing the structural oppression that has marginalized the world champs simply because they’re women.

The internet has real power, which becomes increasingly hard to dispute in a time where Facebook has faced Congress, original Netflix series can have a palpable impact on mental health, and entire discourses that originated online (Do white people wash their legs? Is air conditioning sexist?) become real-life water-cooler topics. I’ve recently been thinking about the online fandom around the USWNT as they claimed their fourth world title. While this fandom expands beyond digital spaces, it’s the impact of this team within those spaces that has piqued my interest as a non-sports fan.

The internet isn’t just a mindless activity for queer people; it can become one of the ways that queer people literally build the foundation of their identity and find the language to describe themselves and the people who will become a part of their community or chosen family. But, because this takes place on the internet, it’s often seen as lesser, and because it’s something sought by marginalized people, it’s a phenomenon that hasn’t gained recognition in the mainstream, this digital-based identity-building. “In my circles, we’ve known for years that the entire USWNT (and also several international players) could and should pile into a four-door sedan and run us down,” explained Katie Speller, a self-proclaimed very online bisexual. “But watching the energy that used to be saved for group chats or in [the] queer-friendly bars we’d pile into to watch a game exist so freely in the open is really exciting.”

Elly Belle, a queer writer from Brooklyn who played soccer for almost 10 years, says that a women’s soccer team gaining this level of recognition while being authentic to their identities is immeasurably impactful. “Bend it Like Beckham was my true queer awakening when I was younger and this past weekend has totally transported me back to my young, queer, in-the-closet soccer playing self who secretly wished for some super gay soccer ladies to be out and proud,” Belle says. “I’ve been taken back to that time in my life when soccer was really important to me, but now I can be out and queer and fully myself and love both the sport and queerness of it all.”

It doesn’t hurt that the USWNT have embraced their intense fandom of queer women fans. Team Captain Megan Rapinoe, who’s one of the team’s most-memed members, told Yahoo! Sports, “Go gays. You can’t win a championship without gays on your team. It’s never been done before. Ever. That’s science right there.”

The much-craved visibility and representation offered by the USWNT is why memes or tweets about wanting to be topped by these champion players are often followed up with comments like, “Now. Pay. Them.”

This is notable because some queer fandoms feel shut down and ignored—even when they sustain entire series or cultural moments. These LGBTQ fans often joke that they’re following breadcrumbs that suggest queerness without actively claiming it. Take, for instance, Killing Eve, a BBC drama starring Jodie Comer as Villanelle and Sandra Oh as Eve Polastri in a will-they-won’t-they cat-and-mouse chase that seemingly leans into the idea that they’re in love with each other. “Has anyone seen my girlfriend?” read one billboard advertising the show’s second season. “Have you told your husband about us Eve?” read another. Yet, Oh told the Gay Times in June 2019 that a relationship between the two characters was “not a focus or a message” of the series, saying, “You guys are tricky because you want to make it into something…but it just isn’t.” That’s a far cry from USWNT player Kelley O’Hara kissing her girlfriend after the team’s World Cup victory. “Just seeing O’Hara kissing her girlfriend in that classic celebratory trope-y moment is a chance to see our community and folks like us show off that we have ownership of those narratives too,” Speller says.

This intense, newfound digital fandom has also helped the USWNT find advocates to help them champion their causes. In March 2019, the USWNT sued the U.S. Soccer Federation under the Equal Pay Act and Title VII of the Civil Rights Act for “institutionalized gender discrimination,” as the women’s team, like many women’s sports teams, is paid less than the men’s team. “I love the idea that cultural icons and figures and even memes can help to shape and inform our politics, and vice versa,” Belle says. “I’ve definitely seen a lot of people talking more about pay equity because of memes and the intense stanning and fan culture surrounding the USWNT and that’s awesome to witness, having something like memes and fan culture that isn’t always taken so seriously by people suddenly get people interested in the political and economic implications of sport.”

“I definitely think [the memes and internet culture] drove awareness,” Gabrielle Noel, a bisexual writer, tells Bitch. “After I was introduced to the cult of Megan Rapinoe, I was scrolling through hashtags—that was how I even saw the equal-pay hashtag. Sometimes memes are the best way to reach people.”

Dinah Shore, which originated as a golf tournament, has sprawled into one of the most major events for queer women in the United States. It didn’t start as a lesbian event, but it has become one—and it survives because it doesn’t attempt to make itself palatable to non-LGBTQ audiences. It also helps that the USWNT is full of queer women (Megan Rapinoe, Ashlyn Harris, Ali Kreiger, Adrianna Franch, and Tierna Davidson are all out players, and coach Jillian Ellis is as well), has many queer fans, and acknowledges the importance of their queer fandom, a community that’s often overlooked in sports. This much-craved visibility and representation is why memes or tweets about wanting to be topped by these champion players are often followed with comments like, “Now. Pay. Them.”

“It really is a gateway for mainstream audiences to see and appreciate the world class athletes who have been running the game for so long and reckon with how little American culture values them and the various communities, programs and systems that even allow players to reach that level of skill and that stage,” Speller says. “I’ve seen people talking Title IX, the ridiculous pay gaps/status gaps between men’s national teams, and just generally thinking and talking critically about which athletes earn idol-status in our country (and which are overlooked)—and it’s amazing that for a lot of people this ‘discourse’ was born from Alex Morgan’s tea sip, Ashlyn Harris’s Instagram rage, or Rapinoe being our father and our Daddy.”

The World Cup doesn’t mark the end of this fandom; the USWNT has gained new advocates and supporters not just by winning, but by crafting this authentic space, digitally and in real life, that sees their fans for who they are.

Read this Next: While Sports Are Rife With Homophobia, Queer Athletes and Fans Find a Home in Women's Soccer