Staking CapitalismThe Undead Will Rise as Our Economy Spirals Into Chaos 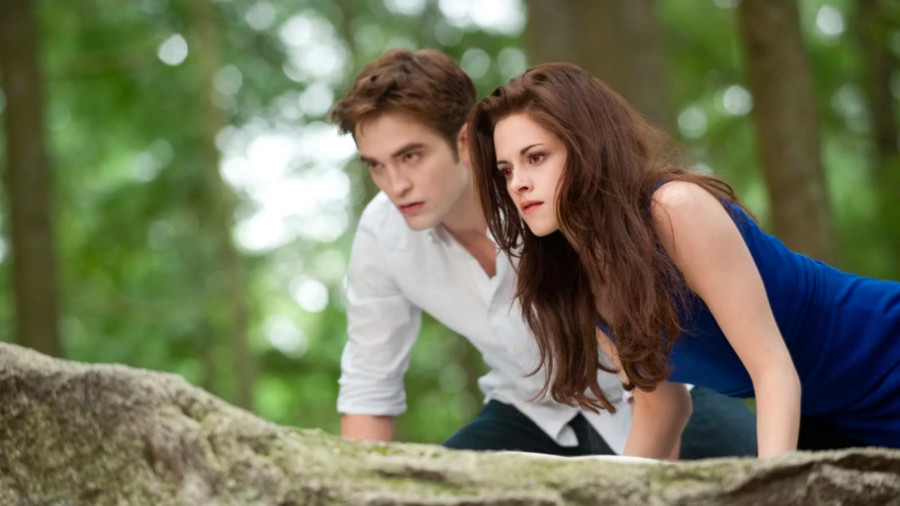 Stock up on garlic and holy water, because vampires are back—again. Netflix is streaming comic-book adaptation V Wars just in time for the holidays, and 2019 also brought yet another film adaptation of Sheridan Le Fanu’s classic 1871 gothic-romance novel, Carmilla. If you prefer reading to screening, the first volume in Renée Ahdeih’s Beautiful duology was released earlier this year, with a sequel coming in 2020; Buffy the Vampire Slayer returned in fantasy author Kiersten White’s January 2019 novel, Slayer. But wait, there’s more: Jay Kristoff’s Empire of the Vampire, an illustrated fantasy trilogy, is slated for September 2020, as is the cheekily-named young-adult anthology Vampires Never Get Old. Marvel is set to bring its living vampire Morbius to the big screen in July, and Mahershala Ali will step into the boots of cult-hero vamp slayer Blade in a forthcoming Marvel film.

While there’s been a steady undercurrent of undead content in pop culture across eras and societies, the present uptick is notable because vampires aren’t the only thing returning in the near future: an economic recession is coming as well. Understanding the peculiar relationship between capitalism and the resurgence of vampires in books and movies underscores pop culture’s ability to sometimes unconsciously mirror larger social trends. While there are few works of vampire fiction that explicitly engage with economic trends, vampires reflect, by their very nature, economic inequality, financial despair, and extractive capitalistic practices that lay waste to communities and those within them.

Vampires have been a persistent and recurrent metaphor for thousands of years; many cultures, including ancient India and Mesopotamia as well as Southeast Asia and Africa, have some version of a humanoid bloodsucking fiend in their folklore, though the characters themselves have evolved over the centuries in appearance, weaknesses, and traits. The modern iteration of the vampire was likely born in Eastern Europe in the 1700s during a manufactured panic that had rural villagers stalking each other in search of killers; at the time, war and financial unrest were making the world dangerous and creating chaotic change. But there were also precursors to this panic: Albania, Greece, and Romania contributed their elements of the legend, including the incorporation of hallowed ground (Albania), the use of cremation for total destruction (Greece), and the need to check the deceased up to seven years later for evidence of vampirism (Romania).

The New England vampire panic of the 1800s (in which citizens attributed tuberculosis-induced deaths to undead relatives who apparently refused to stay buried) illustrated the risk of a “real” vampire epidemic striking close to home. The panic reached its peak during the economic depression of 1815–1821, which affected both Europe and the United States. Most recently, the early-2000s obsession with the Twilight books and films, sandwiched between the dot-com bubble and the Great Recession, highlighted that vampires never die—even when capitalism falters.

Vampires really excel as a kind of mascot of unchecked capitalism. In his 1867 pamphlet Capital, Karl Marx explicitly referred to capital as “vampire-like,” able to survive only through “sucking living labor” and growing stronger and more powerful with time. Since vampires were experiencing a cultural moment at the time—Bram Stoker’s Dracula was released 30 years later—Marx deliberately drew upon this metaphor. Other critics of capitalism have borrowed the same bloodsucking frame, including journalist Matt Taibbi, who in 2010 colorfully referred to Goldman Sachs as a “giant vampire squid…relentlessly jabbing its blood funnel into anything that smells like money.”

Resurgences in vampire pop culture often align with U.S. recessions. Both the Blaxploitation classic Blacula and Interview With the Vampire, the novel that launched horror superstar Anne Rice’s career, came during the economic instability of the 1970s. The Great Depression of the 1930s, meanwhile, brought us Bela Lugosi’s definitive Dracula—who, along with Carl Theodor Dreyer’s Vampyr, launched a thousand men in dramatic capes. And the economic downturn of the early 1990s, in which the United States lost 1.4 percent of its GDP, was also marked with a flurry of vampire content, including installments from Rice, the original Buffy the Vampire Slayer film (1992), the launch of the young-adult fiction series The Vampire Diaries, and Francis Ford Coppola’s iconic adaptation of Bram Stoker’s Dracula. They were preceded by The Hunger (1983), Vampire Hunter D (1985), Near Dark (1987), and The Lost Boys (1987), which rode the turbulent waters of 1980s financial hiccups.

The most recent explosion of vampire content is usually pegged to the Twilight Saga. Along with Twilight, though, came the Vampire Academy books, HBO’s Southern-Gothic vamp series True Blood, as well as the films Underworld (2003), Blade: Trinity (2004), Let the Right One In (a 2004 novel and 2008 film), Ultraviolet (2006), and many more. The new renaissance of vampire storytelling suggests the stars are aligning once more, both for metaphorical bloodsuckers and capitalists lining up to leverage the coming economic downturn. Connecting bloodsucking with thirstily stripping workers of their vital essence may be a direct connection with Marx’s meaning, but vampires are themselves emblematic of capitalism. Many are wealthy—look to Dracula’s hoard or the lavish estates of Rice’s books—and also survive purely extractively, growing richer and more powerful by exploiting others.

Sometimes that’s by way of crudely attacking human victims, but it’s more often through the creation of systems to support their existence, like blood banks where humans can “donate,” mirroring real-world controversies over paid plasma donation, which encourages desperate people to give up their blood so they can make rent. Drug companies, perhaps the ultimate vampires, have been accused of luring immigrants over the U.S.-Mexico border to sell plasma for just a few dollars in U.S. clinics; blood and plasma are huge exports for the United States, which has relatively lax industry oversight. Vampires are an ideal mirror and foil for economic distress and chaos; they’re the perfect monster for recessions. Vampires certainly don’t pay taxes: Their immortality has allowed them to amass immense wealth that can be used to enjoy their endless lives, though some feel wracked with guilt and atone with token donations to charity, as seen when Twilight’s doctor (and vampire) Carlisle Cullen (Peter Facinelli) volunteers his medical skills and when Angel’s eponymous lead donates his supernatural services to hapless humans.

The “vampire with a soul” is often distinguished from his counterparts by a refusal to collude with oppressive systems, sometimes at great personal cost, as in the case of “vegetarian” vampires who survive on an inadequate diet of animal blood. This approach to coping with capitalist anxiety is particularly relevant at this time of year, with billionaires currying favor by tossing a few millions or even casual billions at problems they’ve created. Even for audiences who thrill at a vampire’s wealth and power, there’s also something immensely satisfying about staking them—watching their influence drain away as they are reduced to dusty bones, a puddle of blood, or some similar unpleasantry. The wealth and power that makes them the party animals of the underworld also make them easier to identify, catch, and kill, driving a moral imperative to protect the rest of the world from their influences. Perhaps, then, it’s not a coincidence that beheading—perhaps by guillotine—is one of the most reliable ways to kill a vampire.

As society grows anxious about economic indicators, the dead seem to rise.

Their humanoid nature, especially in contemporary storytelling, where vampires often look and act just like the humans they hunt, makes their monstrosity all the more chilling. The mystique of the serial killer is wrapped up in a monster that passes for human, but has superhuman strength, speed, and abilities, like the power to mesmerize victims; zombies, demons, and other things that go bump in the night cannot silently pass in the same way that vampires can. Some modern-day interpretations have even done away with stalwarts of vampire lore like intolerance to sunlight, fear of running water, or inability to sleep on anything other than a bed of their own grave dirt. At various points, vampires have been identified as metaphors for the LGBTQ community, as seen in Alan Ball’s HBO adaptation of Charlaine Harris’s vampire novels. The vampires of True Blood “came out of the coffin” and immediately found themselves mired in a civil-rights fight to the death, complete with debates about how to show their “best side” to avoid upsetting the living.

They’ve also been used as instruments for exploring race relations and other elements of marginalized identity. And, of course, vampires throughout history have been presented as potently sexual figures. The vampire is at once one of us and not one of us, mysterious and compelling, dangerous and romantic. The overlap between recessions and vampires isn’t perfect, but there’s a strong clustering effect: As society grows anxious about economic indicators, the dead seem to rise. Some of those depictions are sharply and thoughtfully nuanced, using vampires as levers for taking on more complex issues. The sins of capitalism will not stay buried. The breadth and intensity of the coming recession remains to be seen, though indicators like an inverted yield curve, slowing economic growth, and a dangerously high stock market all suggest one is coming—and may be hastened by the Trump-initiated trade war.

The next American president will likely inherit a messy fiscal legacy, just as Barack Obama did in 2008. Hopefully Trump won’t run off with the silver before they arrive, because along with that financial chaos will come the next iteration of vampire mythology, adjusted to align with present tastes—what do Jewish, atheist, Buddhist, Hindu, and Muslim vampires care for crosses? How does the IRS audit the undead? What are the implications of the alternative death movement for the disposition of victims of vampirism? What will a generation of app-enabled vampires look like? And what will it take to put a permanent stake through the heart of capitalism?

Read this Next: Jessica Fletcher of "Murder, She Wrote" Is My Anti-Ageism Heroine