Catching HeatVeronica Alvarez Goes to Bat for Girls in Baseball 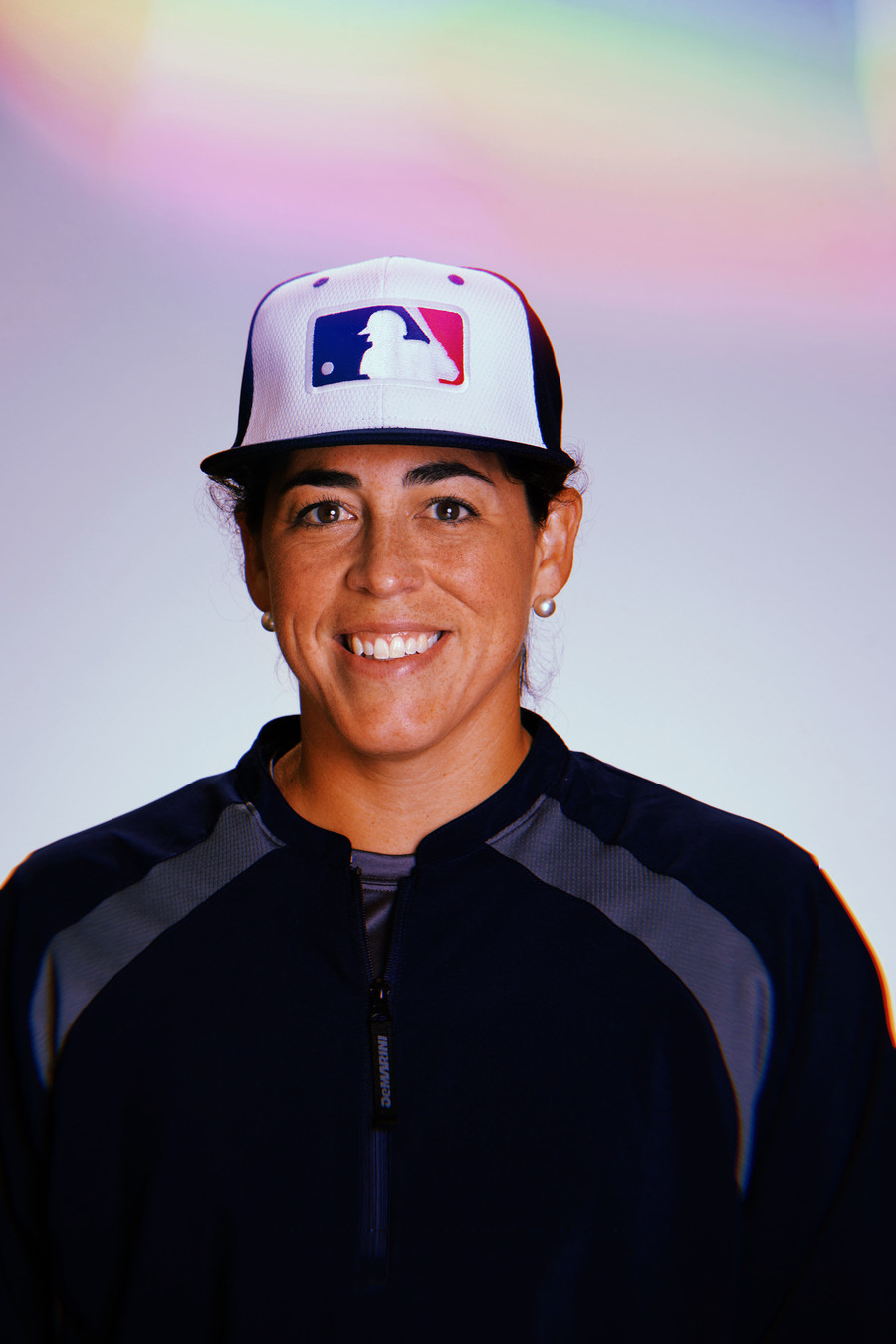 Veronica Alvarez knows a thing or two about heat. After all, the Miami native has dedicated her life to its pursuit: playing baseball in suffocatingly humid Florida weather; squatting behind the plate as pitchers throw gas into her mitt; representing the United States on the biggest stage for women baseball players; and putting out fires as a member of the City of Hollywood Fire Rescue and Beach Safety Department. No matter how you shake it, Alvarez is hot. She’s also highly caffeinated; after playing phone tag for weeks, she pushes our 8:45 a.m. phone call back 15 minutes so she can grab coffee before we talk. She needs a pick-me-up after working a 24-hour shift at the fire station. Coffee is a staple in Alvarez’s world, but a good buzz isn’t the only thing she has brought to baseball.

Alvarez, a first-generation Cuban American, comes from a long line of baseball lovers, including her grandfather and her brother Raul. By the time she was 5, Alvarez had fallen in love with the sport, and she began working as the bat girl for Raul’s team until she was old enough to try out for Little League herself. In Alvarez’s family, she says, “your daughter does not play baseball.” The Cuban community where she grew up held traditional ideas about gender roles, believing that girls were better suited for ballet—another sport Alvarez’s parents tried to introduce her to. But Alvarez had no interest in pirouettes. She wanted to play ball, and thankfully her parents indulged their daughter’s passion for the sport. “I wouldn’t have had this”—this career, these experiences, this thing she loves more than anything else in the world—“if they wouldn’t have supported me,” she says.

Alvarez was 10 when she was funneled out of Little League baseball and into softball; in her case, she began playing softball with a friend and then switched to a school with a softball team, where she was encouraged to choose just one sport so she wouldn’t compromise her mechanics. Her experience is far from unique. The girls baseball organization Baseball for All estimates that 100,000 girls in the United States play baseball at the youth level each year, but only 1,000 remain in the sport by the time they reach high school. Many of those athletes switch to softball, while others gravitate toward other sports. Some of them are simply tired of being the only girl on the team, of constantly having to prove themselves.

Though Alvarez enjoyed playing softball, and it afforded her incredible opportunities, including a scholarship to play Division I ball at Villanova University and the chance to play professionally for a summer in Spain, she says, “I always felt like I was more of a baseball player playing softball than a softball player.” Softball is more of a quick-reactions sport because “the distances [between the bases and from the pitcher’s mound to home plate are] so short,” Alvarez explains. “So there’s less strategy in the game. I’m not saying there isn’t any strategy, but there’s less time to have strategy, so it’s more of just reacting to the situation. In baseball, there’s a game within the game, more strategy, more situational plays.”

When Alvarez returned from Spain in 2006, she wasn’t ready to put down the bat. So she started Googling—looking to see if the Colorado Silver Bullets, a women’s baseball team that played from 1994 until 1997, still existed. Instead, she found the U.S. Women’s National Baseball Team (USWNT), which had just competed in the 2006 Women’s Baseball World Cup (WBWC). The season was already underway, but she sent an email anyway; the next year, when they were recruiting players to come to tryouts, Alvarez got the call. When Alvarez tried out for the USWNT for the first time in 2008, she was behind the dish for 16-year-old Marti Sementelli, a baseball phenom who had made a name for herself pitching against the boys.

Sementelli, now 26, was also trying out for USWNT for the first time and had never had a female catcher before. “She was phenomenal,” Sementelli says of Alvarez. “It was just great the way she called my pitches. It was like she knew me growing up and had caught me my entire life.” Behind the plate is where Alvarez feels most at home. “I love catching because there’s the pitch calling aspect of the game, directing your field according to what [is] happening, the situation” as it plays out in front of you. Alvarez is now one of the most influential baseball players in the United States. 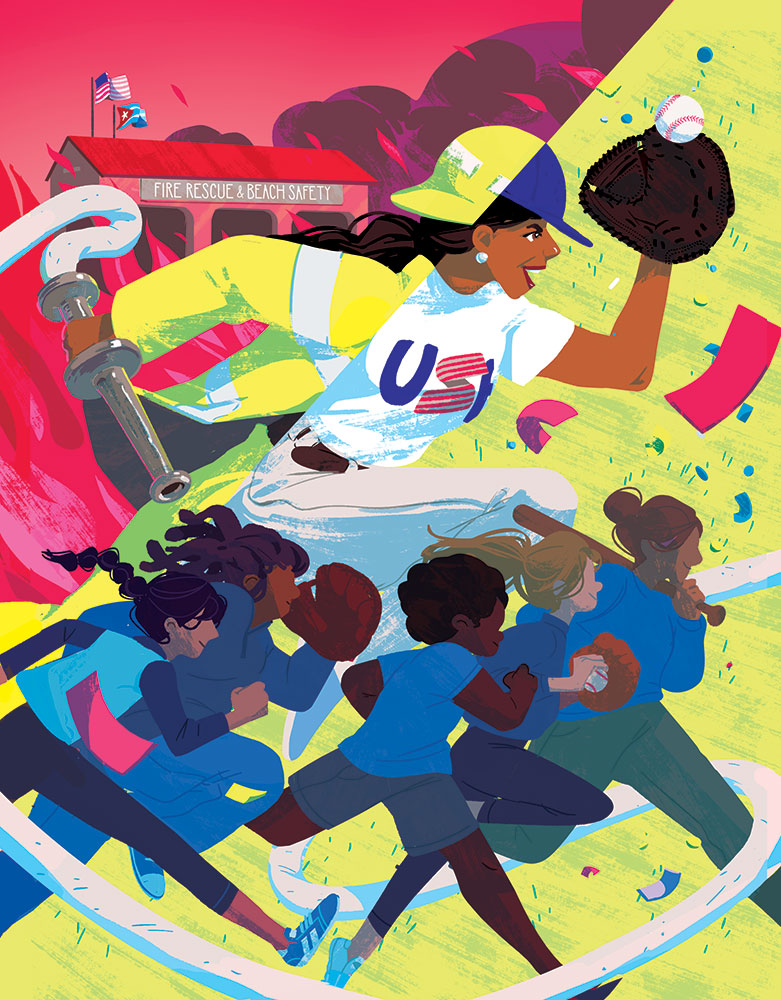 The 35-year-old catcher has played on the 2008, 2010, 2012, and 2016 United States Women’s National Baseball teams. (She only missed the 2014 games because she had recently been hired as a firefighter, and her hire date was the same week as the tournament.) She coached the U.S. team at the 2018 WBWC, using her decades of experience to shape the next generation of women players, and is also working with Major League Baseball to help shape the growth and development of girls baseball around the country.

As it now stands, once girls age out of youth baseball at 12, there’s nowhere else for them to play. Some girls will try out for school teams, though not all will be allowed to. In other countries, like Japan, there are more girls leagues—including a professional one. In the United States, much of that infrastructure does not exist because the assumption is that girls will play softball—and they will, as long as the infrastructure continues not to exist for them. Even if a woman gets to the highest level of the sport, as Alvarez has, there is little money to be made, and players still have to create their own training regimens. Some players bat off a tee in their backyard, while others, like Alvarez, have to beg high-school teams to let them practice with them. (Alvarez convinced a high-school coach to let her practice—after he initially laughed at her.)

Alvarez wanted to see some live action, squat behind the plate, and catch some stuff, but she had to prove she could do it. And she did. She always does. “I went out there and I was a teenage boy for a good three months, which was awesome,” she says. “I call it ‘making believers.’ We just make believers out of people.”

It’s clear that the major leagues are the highest level for boys, but so many girls, even the ones out there playing right now, have no idea that there is a team waiting for them, too.

She’s now turning the bigwigs of Major League Baseball (MLB) into believers as an ambassador for the league’s programming for girls. While these programs have only cropped up over the past two years, they’re growing rapidly. Since 2017, MLB has added three development events geared toward girls. They started with the Trailblazers Series, an all-girls tournament in California, where Alvarez has coached since the series’ inception. MLB added a Breakthrough Series for girls in 2018, and debuted their MLB Grit high-school baseball tournament in March of this year. This programming is designed to help develop young female players, scout them for the USWNT, and create a community around the game.

For Alvarez, these events are a chance to help develop the infrastructure that didn’t exist when she was growing up and an opportunity for young girls who love playing baseball to see that they are not alone. Alvarez serves as an example of a woman who plays the sport at the highest levels. Her experience makes her a great fit for the role. “Due to her knowledge and broad understanding of the game, Veronica has proven herself to be an incredible asset to Major League Baseball at our various events,” says Kim Ng, MLB’s senior vice president of baseball operations. “She has great presence, confidence, and knows how to break down and simplify baseball concepts for the young players.” Alvarez thinks it’s time for the media to stop writing about female ballplayers as if they’re novel-ties or it will remain challenging to change inaccurate perceptions surrounding women’s role in the sport.

Women and girls have been playing baseball since its inception in the second half of the 19th century (Google “Vassar Resolutes”), but all too often they’re erased from the standard baseball narrative. “Let’s say Mo’ne Davis, because she’s the one that’s most known, came on the scene, it was like they highlighted her as if nobody had ever done this before. And that’s just what happens every single time,” says Alvarez. She points out that none of the stories about Davis mentioned that the U.S. Women’s National Team existed. It’s clear that the major leagues are the highest level for boys, but so many girls, even the ones out there playing right now, have no idea that there is a team waiting for them, too. “I want the girls to know we exist,” Alvarez says. “Not for our fame, but for them just to have that kind of sense of security that they’re not different from others, just because they like a game that girls don’t usually play.”

Read this Next: The Women’s Baseball World Cup is the Best Kept Secret in Sports 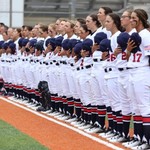 by Britni de la Cretaz
Viewership numbers can send a message that there’s a demand for women’s baseball.