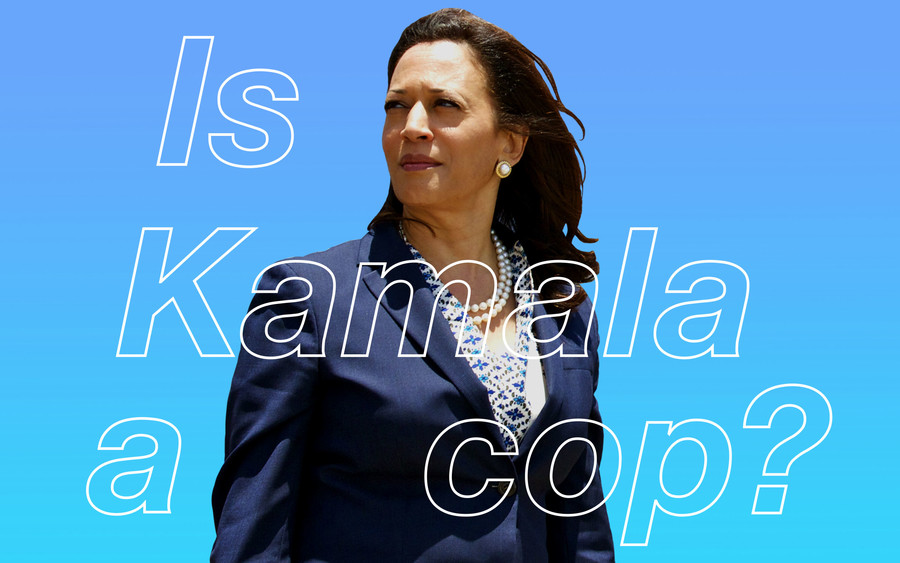 Earlier this week, in a piece for Salon, politics writer Amanda Marcotte wrote, “‘Kamala is a cop’ became [leftist Twitter’s] smarmy and endlessly repeated meme—one that was either originated by right-wing forces or perpetrated by them, with a finely honed instinct for the worst urges of their leftist counterparts.” But as media and would-be voters conduct a postmortem on Harris’s now-ended campaign, it’s worth asking whether “Kopmala” is a smarmy meme, or an accurate narrative. Harris hails from California, where she was a prosecutor, district attorney, and state attorney general, and eventually came to represent the state in the Senate. For this record, she received criticism from those who want to abolish the criminal-justice system rather than offer soft reform that for Black people in particular, isn’t enough.

Black voters had high expectations for a Black woman candidate: a disappointing white candidate is standard, but a disappointing Black candidate is additionally frustrating. To counter this, she released a criminal-justice reform plan in September: “A plan to fundamentally transform our criminal justice system to shift away from mass incarceration and to invest in building safer and healthier communities,” a Medium post penned under her name explained. Examining the history of the criminal justice system, the piece (I say the piece, rather than Harris herself, as the article is in third person) states, “At its worst, decades of failed policies have created an unjust, unequal, and vastly expansive system that disproportionately harms communities of color and criminalizes individuals just because they are poor.”

Upon her departure from the presidential race, pundits, politicos, and Twitter users began to blame white people, including Bernie Bros, for promoting the “Kamala is a cop” narrative. Several articles popped up about the way she was harmed by what they called a meme. At the crux of the issue is this: What does it mean that “Kamala is a cop” is being called a meme as a means to dismiss it, especially considering that Black people drive much of meme culture? “Though the ‘Kamala Is a Cop’ meme allegedly began on social media, it serves as a valid critique of her former criminal justice record,” explains Robyn Mowatt, 27, a Black writer based in New York. “The meme speaks truth and unveils the past of a figure who was once being seriously considered as a ‘problem solver’ and frontrunner for the Democratic party ahead of the 2020 election. Harris, in my opinion, is responsible for the creation of the ‘cop’ narrative due to her past actions, policies and decisions.”

“I would say it’s a narrative but not a meme,” K Agbebiyi, 25, a Black femme and organizer/social worker based in Brooklyn, tells Bitch. “I feel like ‘meme’ diminishes the seriousness and violence of what policing actually is.” So what impact did the language of “Kamala is a cop” have on Harris’s campaign, really? And who was behind it? “I support the narrative that Kamala is a cop because she said it herself, and used her record of being tough on poor Black families to launch her career,” explains Ricki, a 25-year-old Black queer activist born and raised in California. “For those arguing that the narrative was crafted by white people, I would say that no one has a deeper understanding of the different ways cops harm Black people than Black people.”

We live in a strange and admittedly terrifying political time where social media doesn’t just influence campaigns—it literally makes or breaks them. And not in the nonthreatening way that some imagine, with social media as a utopia of discussion and exchanging ideas. Platforms like Facebook and Twitter have real, tangible impacts on our understanding of politics and politicians. We’re in a time of digital blackface, where Twitter accounts ostensibly run by Black people teem with Photoshopped pictures of supposed Black Trump supporters in an insidious kind of identity theft; where deepfakes are causing increasing concern, with videos appearing to show politicians saying and doing things they never actually said or did; where the question of how many bots and fakes are created to stroke the ego of a President who’s weaponized Twitter to denounce anyone who crosses him.

As Frederick Joseph notes in the Independent, “In an era where social justice and movements such as Black Lives Matter enjoy much-needed visibility, Harris’s opposition saw an opportunity to pounce … At one point, it even appeared that social media bots were maliciously spreading tweets claiming she wasn’t “black enough” and questioning her ethnicity.” Still, Ashley Reese writes in Jezebel, “[N]o evidence suggests bot-driven disinformation campaigns initially latched onto Harris’s prosecutorial record.” There’s no question that the 2020 election will involve questions of how social media has blurred lines between real and fake. But to lean on, rather than engage with, this criticism in order to toss aside valid critique of candidates is to simplify and flatten the narrative.

Appropriation is nothing new for white people, so in many ways it’s unsurprising that, for instance, The Federalist sold “Kamala is a cop” shirts: Racist, misogynist white people looking for an excuse to wound the campaign of a Black woman would latch onto the Kamala-is-a-cop meme in obviously bad faith. But white people latching onto a meme for their own ends doesn’t invalidate the debates and concerns within Black communities about a president who has a long record of harming them. As Ricki explains, “While white people certainly co-opted the narrative, [cleaning up after] Kamala is a line of activists and organizers who are working to undo the damage she has wreaked on my home state.”

“The vast majority of people I’ve seen perpetuate [the Kamala-is-a-cop] narrative are Black and brown people,” says Reina Sultan, 24, a Lebanese American Muslim woman, California native, and news and politics writer. “It’s reductive to just dismiss criticisms of her as misogynoir, because those same people have been critical of all candidates [who are] pro-cop and pro-criminalization.” She adds, “Black and brown people have also been the majority of people standing up for the trans people and sex workers of color most affected by [Harris’s] harmful policies as attorney general. White people don’t even know the half of the harm she’s caused.”

The attempt to distill Harris’s prosecutorial history down to a meme further proves that white people don’t only not understand Blackness—they also don’t understand memes. Dr. Lauren Michele Jackson, author of White Negroes: When Cornrows Were in Vogue … and Other Thoughts on Cultural Appropriation, explained to Intelligencer why the internet is “Black as fuck,” stating, “Really, if we’re thinking in terms of digital culture, it gets a lot more complicated and a lot less white. In some ways, ‘black as fuck’ is a provocation, it’s hyperbole, but in many ways, I really think that digital culture needs black people to sustain itself, or is sustained by black people.” White people, despite hundreds of years of attempting to do so, don’t get to decide what Black people and people of color should think—on the internet or otherwise—about politics and specific candidates.

This judgment is similar to the infantilizing, frustrating arguments that were tossed at Black people who supported Hillary Clinton rather than Bernie Sanders in 2016, and that resulted from the endorsement of Sanders by Ilhan Omar and Alexandria Ocasio-Cortez in 2019: They aren’t voting the way we want them to, so they must be being tricked, or manipulated, by white media or bots. But who is that we, and why are they dead set on deciding what a demographic they don’t belong to thinks, as if that demographic is a monolith? “You can’t just claim things are created by white people when they conflict with your views that aren’t informed by things other than the misuse of identity politics,” K explains. “People saying [the meme is] made up by white people … aren’t in any form of meaningful community with abolitionist Black organizers who [were] saying this before the election and who will be saying this long after.” To argue that “Kamala is a cop” is a meme, and therefore is false, not only dismisses the idea that memes matter (despite what we know to the contrary), but also perpetuates the idea that the ways that Black people communicate and what Black people think must always be lesser.

What impact did the language of “Kamala is a cop” have on Harris’s campaign, really? And who was behind it?

When she dropped out of the race, a thoughtless, knee-jerk part of me was a little sad for Harris. After all, a Black woman president sounds pretty incredible. But her record speaks for itself, and it holds more weight than an identity she just so happened to have. “Identity politics do not apply here precisely because Kamala has made her career off the backs of Black people—specifically poor Black people and those of us who belong to the LGBTQ community,” Ricki told me. “It takes a special kind of cruelty to overlook that, and for her to lack the conviction to meet and address the criticisms of those she has harmed.” As Lara Witt wrote in Wear Your Voice in January 2019, “Her brown skin puts a slightly more pleasant and reassuring face on white supremacy and mass incarceration.”

In 2019, memes aren’t just nonsense spawned in forums only to be stolen and repurposed by dozens of aggregator accounts. They’re a very real way for us to think out loud and engage in the discourse together. When asked why they support the language of “Kopmala,” Sultan explains, “[The memeification creates] an easily digestible way to call out a candidate for having been a prosecutor in the immensely corrupt justice system we have here in the US…. Calling her a cop gets to the core of the issue: If you’re not against criminalization and incarceration, you’re for them. Kamala is for them.”

Harris’s gender and race certainly didn’t help her in a run to preside over a racist, sexist country. But her own words and history didn’t help either. This is yet another situation where it’s not either/or; it’s both/and, and the unwillingness of white people to understand that Black people can not root for a Black candidate, can choose to participate in a meme, and can refuse the expectation that they act and vote as a monolith points to the continued gap between the ways that white and Black people use, experience, and understand the discourse of the internet.