Very OnlineAnti-Racist Readers Are Plaguing the DMs of Black People 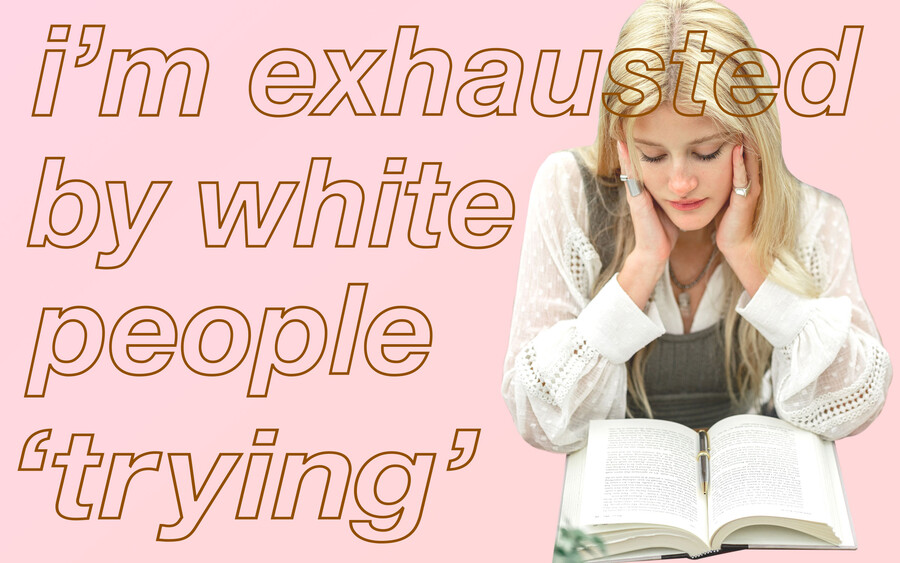 We’re in the time of the rise of the online anti-racism book club: Publications ranging from Time magazine to the Strategist has been curating anti-racist books lists. Your social feeds might also be overwhelmed with photo collages of book covers (“Suddenly Instagram, typically the most unabashedly shallow social media platform, has converted overnight into the world’s largest anti-racism bookstore,” Jessa Crispin, former Bookslut editor-in-chief, wrote in The Guardian.) And even your Facebook friends are likely sharing a book or two. But who are anti-racist book clubs for, what is the goal of creating them, and what do they mean for the Black people they’re supposedly meant to serve? “I have this pet theory about book recommendations,” Lauren Michele Jackson wrote in a recent Vulture article about this trend. “They feel good to solicit, good to mete out, but someone at some point has to get down to the business of reading. And there, between giving and receiving, lies a great gulf. No one can quite account for what happens. Reading, hopefully, but you never can be sure.”

Both Crispin and Jackson are asking the right questions: Across Instagram, in particular, brands are recommending books upon books, building collages and Instagram Story highlights dedicated to reading lists. Our feeds have shifted from images of smiling friends, food photoshoots, and low-quality memes to becoming inundated with the covers of books like Carol Anderson’s White Rage: The Unspoken Truth of Our Racial Divide (2016) and Robin DiAngelo’s White Fragility: Why It’s So Hard for White People to Talk About Racism (2018). In the last few weeks, I’ve seen more book covers on Instagram than the traditional latte art or selfies. It’s an unprecedented time for the platform.

Now, as white readers make reading anti-racist books a part of their praxis, and take it upon themselves to lead virtual book clubs, Black people are finding themselves carrying another burden from, largely, white people: a flood of requests from white people who don’t know what books to assign or which books to read. Instead of reading the massive number of lists available online, they demand that the Black people they know recommend books to them. In some cases, these are their Black friends, but in many others, they’re making demands of Black people they’re only assuming they’re friends with, like coworkers or people they follow on social media. It’s almost as if some white people have decided that the solution to their own deep-down racism is to follow as many Black people as possible—and then demand to be educated. So what does this new phenomenon mean for the Black people who’ve been doing this work for a long time, and simply want to scroll mindlessly through their DMs without being bombarded with these random requests?

“I’ve been inundated with white people and other non-Black people asking me for book recs,” Traci Thomas, 33, a Los Angeles-based creator and host of The Stacks podcast told Bitch. “I have a podcast, The Stacks, where I discuss books by all sorts of people, so I am constantly asked about book recs. I have put together two anti-racist book lists in the last few weeks, one nonfiction and one fiction. I am now getting asked things like, ‘Great list, which book should I start with?’ or, ‘What are your top five from this list?’”

Bry, a student and writer based in Baltimore, Maryland, has had a similar experience. “Between May 29, 2020 and today, I’ve had 34 white folks reach out to me about reading guides/book recs,” they said recently. “It’s also interesting since I wrote an entire thread of PDF recs for folks with links and it went viral. Some people hit me up requesting I send the thread straight to them. I broke down in tears. I’ve felt so extracted from for like, two weeks.”

Of course, this type of labor is exhausting, considering we’re still in the midst of not only a pandemic, but also a global conversation about abolishing the police and attempts to protest and solve police brutality. Black people are already tired. “I also have been getting people telling me what books on my anti-racist reading list are by white people and why I shouldn’t be promoting those books,” Thomas says. “This coming from people who admittedly just learned about racism yesterday. That is deeply frustrating and annoying.” This is also especially draining considering that these resources have always existed. But it took until now for some white people to care enough to seek them out. Social media, particularly Instagram, given its search features and visual nature, makes it easy to find influencers and experts whose entire brand revolves around educating people about racism and anti-Blackness.

Rachel Cargle, who has surpassed 1.8 million followers, fills her feeds with helpful tips and quotes; Austin Channing Brown, with more than 340,000 followers, uses colorful graphics to communicate her thoughts about racial justice; and Myisha T. Hill, who runs Check Your Privilege, offers courses, a podcast, and a book about social justice. They’ve willingly positioned themselves to do this work and have developed an expertise over time. “It’s hard for me to believe that many of these white people are qualified to be leading these conversations,” Thomas says. “I wish instead they would hire (yes, pay) Black facilitators to do this work with them and their book clubs. This is real work for many Black people who have trained and studied, and they can help make these book clubs actually useful.”

As white readers make reading anti-racist books a part of their praxis, and take it upon themselves to lead virtual book clubs, Black people are finding themselves carrying another burden from, largely, white people: a flood of requests from white people who don’t know what books to assign or which books to read.

Instead of hiring a Black person who teaches about anti-Blackness and racism, some white readers make demands of Black people who’ve never agreed to be their educators. “[My podcast] has more than 150 episodes, many of them with Black guests and authors and/or about Black books,” Thomas says. “The resources are all right there. They don’t need to ask me. This performance of asking is simply to show their work and to virtue signal to me that they’re ‘trying.’ I am exhausted by white people ‘trying.’”

Nia Tucker, a Black person based in Boston who runs New Comrades Book Club has had a similar experience. “I actually started my own leftist book club at the start of quarantine,” Tucker says. “In these past few weeks, as I introduced a list of books to read about and by Black leftists, the club has had a major influx of followers, especially white and non-Black ones, seeking to read ‘anti-racist’ literature.” But their joining hasn’t always been a positive experience.

Reading anti-racist books won’t end racism. And making demands of the Black people in your life so that you can feel good about the books on your coffee table certainly won’t either. “Part of it is our naive and longstanding belief that we can buy our way to liberation,” Crispin wrote in the aforementioned Guardian article. “Maybe if we all just consume the right products, the world will become a better place. But buying grass-fed beef didn’t slow global warming, it just made a couple of very rich men much richer. Buying a couple of books from the Women’s History Month display table at Barnes & Noble didn’t solve misogyny.”

When I go on Instagram, I’m looking for a new recipe, sending love to a friend, or seeking tips for my next pottery endeavor. I’m relaxed, curled up on the couch with my cats, or mindlessly scrolling. I am off. But when white people slide into my DMs with innocent questions about which books they can read to solve the world’s problems, I have to turn back on again. I have to go into fixer mode, and Black people deserve a moment’s peace to scroll, thoughtlessly, without being asked to fix the world yet again.