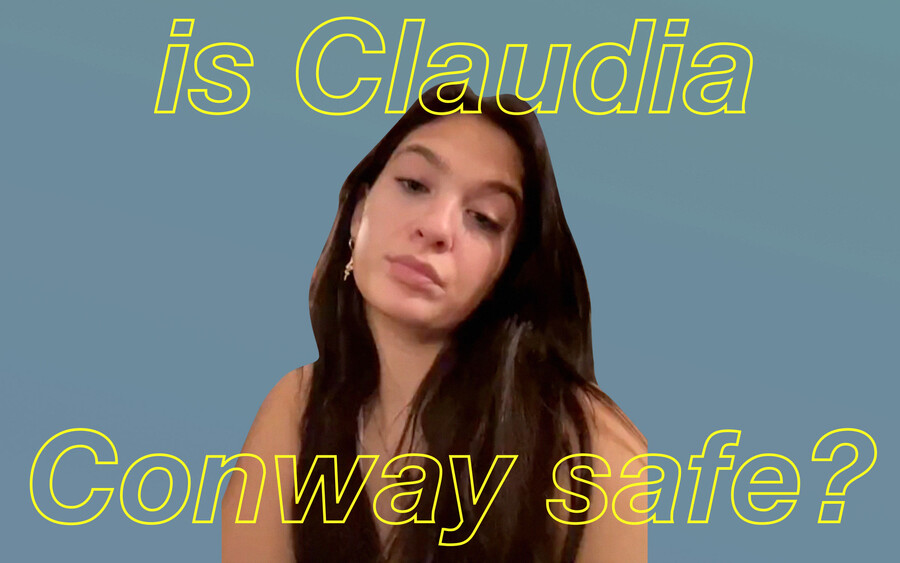 Sixteen-year-old Claudia Conway has a massive platform: She has been written about by everyone from the New York Times and Refinery29 to various Reddit users. She has more than 500,000 followers on Twitter; nearly 200,000 followers on Instagram; and 1.6 million followers on TikTok, with nearly 68 million likes across her 627 videos. In some ways, Conway is an all-powerful force, an unstoppable young woman, and a “resistance hero” who refuses to be silenced by her prominent parents. And yet, she’s still a teenage girl with minimal power and little control over her own life—even if she may appear to dominate her family’s narrative online.

Conway posts the most often on TikTok: She goes from blond to brunette, films herself doing the latest dance, pretends to cry when people say they don’t like her, and poses during golden hour with captions like “be your best self today.” Though this is standard TikTok fare, multiple factors separate Conway from the rest of TikTok’s primarily teen fanbase. Her parents are noted bigot Kellyanne Conway, Donald Trump’s former White House advisor, and George Conway, one of the founders of the anti-Trump organization The Lincoln Project. Being the child of two parents with distinctively different political views would be noteworthy on its own, but Conway uses TikTok to blast her parents for being conservatives in the first place. Beyond that though, Conway has continued to generate interest on the internet—and political circles more broadly—because she’s been accusing her parents of abusing her for years.

Yes, Conway is funny and relatable, but in August 2020, she began tweeting about “pushing for emancipation” and cracking jokes about hiding from her mother: She posted an eerie TikTok video titled, “when u hear kelly’s footsteps,” on January 1. The issue reached a fever pitch this week as publications began reporting that Kellyanne was under police investigation after she reportedly posted a Fleet—a temporary, Instagram Story-like post—of a nude photo of her daughter. It was swiftly reported and removed because Conway is a child and is therefore unable to consent to her nude body being displayed on the internet. “My mom deserves to go to jail—that’s unreal,” she posted on TikTok in the immediate aftermath of the Fleet, but then, Conway backtracked.

She posted three videos about the abuse allegations circling her parents. “We fight like mothers and daughters but being in the public eye exacerbates that greatly…. I don’t want that,” she says in the first video. “I don’t want any drama. I don’t want any hate.” She also notes that the video “wasn’t forced.” In the final video, she follows up with,  “Making threats is really putting my safety at risk and putting me in danger. I get that you’re trying to help me, but by putting my family in danger, you’re putting me in danger.” Conway hasn’t posted a public video on the platform since. These videos feel eerily similar to Conway’s last tweet, sent in August 2020, in which she writes, “This is becoming way too much so I am taking a mental health break from social media. See y’all soon. Thank you for the love and support. No hate to my parents please.” Again, she’s pleading with her audience to be kind to her parents.

Though some people have accused Conway of seeking attention, she said in a January 23 TikTok video, “I don’t think any of you understand what it’s like to be in the situation I’m in. I posted those hoping that maybe I would get some sort of help. But nothing’s gonna happen. So I deleted them in fear of being gaslighted.” And that’s the crux of the issue: We don’t know who’s scrubbing Conway’s social media accounts. We don’t know if she chose to film the video about her relationship with her mother being normal (it’s not), and we don’t know if Conway is choosing to step away from social media or if she’s being forced to.

Claudia Conway is still a teenage girl with minimal power and little control over her own life—even if she may appear to dominate her family’s narrative online.

We just don’t know because we can’t know. Her followers are merely outsiders following her saga, looking at her selfie videos, and or screenshotting her tweets before they’re all-too-swiftly taken down. We’re faux detectives and protectors—just people who admire Conway for being a Gen-Zer refusing to be kept down by her parents or just people concerned about her well-being. But no matter our perspective, we can’t quite get at the truth for myriad reasons. On one hand, social media can be used by perpetrators to target children and teenagers and abuse them. On the other hand, young people who are already being abused can use social media to scrape their way toward freedom or least create a supportive community that helps them survive. On r/insaneparents, a Reddit community created in 2017, users share stories about their own parents’ vile, embarrassing, and violent behavior. They often post screenshots of texts or other social media posts in which their parents are being horrible to them or other people. Alongside 1.2 million readers, users can, per the thread’s about section, post about parents who “do things harmful (directly and indirectly) to their children.” Every single day, people use this corner of the internet to detail how their parents are harming them. Their goal isn’t necessarily to seek revenge or to fight back or to even ask for help; so often, it’s just a chance to be heard and to be believed. Social media won’t save them, but it will remind them they’re not alone.

In Conway’s case, the issue is complicated by the fact that people assume she has power in her scenario because she’s shepherding such a massive platform. How many 16-year-olds have the ability to share their parents’ cruelty with hundreds of thousands of people, many of whom are actually listening and want to help? But filming something violent—and even getting it into the hands of the right people—doesn’t necessarily have the impact we might imagine. Survivors of domestic violence might take the “right” photos or record the “right” audio, but that doesn’t mean they’ve entered a pipeline to freedom or to being believed. Conway is a privileged white girl with hundreds of thousands of supporters. We’ve seen the footage, but the cycle is continuing no matter how many people are watching. This isn’t a girl talking to a friend alone in her room about what she’s experienced; it’s a young woman saying to everyone, including the adults in the room, that she’s enduring something horrible. But what can we actually do? If abusers can control the narrative by simply taking a teenager’s phone, then what is the value of a large platform for a young person in an abusive household?

I don’t know what, if anything, we can do for Conway. However, I do hope that Conway is being listened to—not just by those of us who have anxiously watched her videos, but by the people in her life who can actually do something about it.