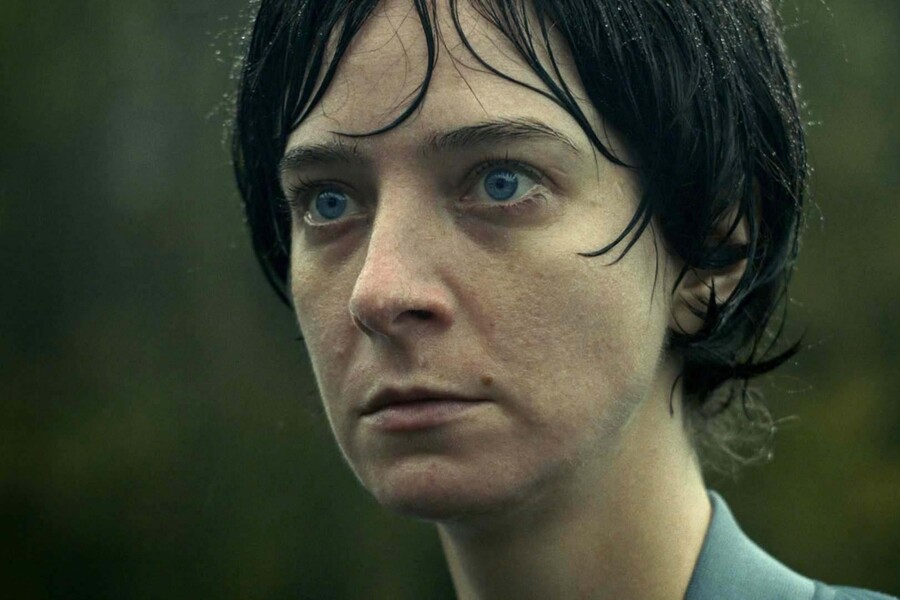 The opening shot in Violation, the newest addition to the rape-revenge genre, captures a menacing wolf eating a grey rabbit in a dark, thick forest. Backed by ominous choral music, the hunter peers into the camera as he chews on the carcass hanging limply from his mouth. This kind of visual tableau comes across as a bit too on the nose; using the predator and prey dynamic to open a story of revenge is anything but subtle. But this opening is in fact an excellent precursor to the events that take place in Violation, because there’s nothing allegorical in Canadian directing duo Dusty Mancinelli and Madeleine Sims-Fewer’s film: There are no grey areas, no parables—every action is cut-and-dry, every drop of spilled blood legitimate. For instance, when Miriam (Sims-Fewer) and her brother-in-law Dylan (Jesse LaVercombe) go hunting near the beginning of the film, Miriam, a vegetarian, asks: “What do you get out of all of this? Of hurting animals?” Dylan chuckles before answering—baring joy, deep pleasure. He half-attempts to give a different justification, that he hunts to quash overpopulation, but it’s very clear that this is a deflection. Dylan simply enjoys hunting.

As with the opening shot of the wolf, Mancinelli and Sims-Fewer don’t mince words in their foreshadowing; before any assault occurs, we understand the key players involved. Back at the lakeside cabin, Miriam watches Dylan interact with her sister, Greta (Anna Maguire). The two fizzle with attraction and electricity. While Miriam and her husband, Caleb (Obi Abili), who accompanied her on the trip, are emotionally distant and dry, Dylan and Greta are very much into each other, almost to the point of exhibitionism. Cementing their contrast, Miriam even admits that in order to be intimate with Caleb, she has to get blackout drunk. And so the dynamics are established early in Violation: Miriam is growing apart from Caleb, is close to Greta, and is friendly with Dylan. But these dynamics do little to plaster a meaningful spin on the assault that occurs later. Mancinelli and Sims-Fewer aren’t very concerned with explaining why Dylan rapes Miriam during a quiet night at the side of a dying campfire—projecting Miriam’s emotions onto the screen and making sure they’re as authentic and undiluted as possible is the directors’ only concern.

We’re treated to Miriam’s revenge before we’re shown the assault itself. This feels significant because it further purports that Miriam is the pulsing beat of the film, that revenge is not contingent on the actions of the aggressor but rather on the motives of the person who enacts it. In other words, revenge is born out of pain, not narrative. And so Violation is as much a measured study of hurt as it is a Kill Bill-esque tale of vengeance. Fittingly, the film has very little narrative flair or plot; the events are shown bare and without much fluff or backstory. This is in stark contrast to recent rape-revenge thrillers—namely, Emerald Fennell’s Promising Young Woman, released in 2020—which use a surrogate to enact vengeance. In Fennell’s film, the surrogate is Cassie (Carey Mulligan), who makes it her mission to confront and punish all of the people who protected and defended her childhood best friend Nina’s rapist. Promising Young Woman is the antithesis of Violation, in that it’s more concerned with lining up a sensational story—leading up to a gotcha! plot twist—than it is with charting the emotions that run as undercurrents to rape and the lack of support offered from institutions in the act’s aftermath. This isn’t necessarily a bad thing: Promising Young Woman is palatable and much less intense than Violation, meaning it can reach a wider audience.

The problem with Fennell’s philosophy becomes apparent in the latter half of her film, specifically during the climax: when Cassie ensures that the only substantive blow of vengeance is doled out not by her but by the police—a problematic conclusion given that police are notoriously unhelpful to survivors of sexual assault, with an estimated 49 out of 50 rape cases closing each year without any arrests or convictions. And so the idea that the police come to Cassie’s—and Nina’s—rescue doesn’t feel entirely reflective of the police response many survivors receive. But Promising Young Woman has another glaring problem: Cassie ultimately falls victim to the very powers she was attempting to fight, insinuating that the only players who have the ability to enact meaningful revenge are law enforcement. This isn’t to say that a rape-revenge story is successful only when the victim—or her (nonpolice) proxy—doles out the climactic blow herself. Jennifer Kent’s 2018 haunting thriller The Nightingale is proof that an act of vengeance can be cooperative without compromising agency. Kent’s sophomore feature is set in 1820s Tasmania, at the time a dominion of Britain, and follows Irish convict Clare (Aisling Franciosi) as she, accompanied by Aboriginal tracker Billy (Baykali Ganambarr), hunts down the three men who raped her and killed her family.

In their days-long trek, Billy outlines the history of Tasmania’s colonization—how the British kidnapped, murdered, and raped members of Billy’s family and the larger Aboriginal community. And so, in the final act of the film, when Billy kills two of the three men—with Clare killing only one—it doesn’t feel like Clare was robbed of catharsis. Instead, their collaboration stands as a significant act of solidarity between two individuals who were marginalized in different ways by the same system. Violation is also concerned with agency, but—as with its treatment of hurt—it’s also focused on examining the idea isolated from any meaningful deeper institutional connections (like race or class). Miriam kills Dylan and proceeds to clinically dismember him, something that she clearly spent a lot of time researching. Yet, we never see montages of her visiting the library or surfing the web, because the premeditation of this meticulously planned act isn’t important. It doesn’t matter how Miriam learned which artery to cut; what matters is that she does it. And once she does, she becomes physically ill, gagging and vomitting near Dylan’s corpse. In this graphic, disturbing scene, we see the nature of agency clearer than ever before: In dismembering Dylan, Miriam doesn’t come across as a badass heroine; instead, she’s a martyr at her breaking point, someone who’s pushing through her limits to balance the scales of justice because she knows no one else will.

Violation offers a clinical perspective into the pain that motivates revenge, validating the hurt that victims of rape feel while charting the draining and painful road to regaining autonomy over the self.

In this way, Mancinelli and Sims-Fewer offer the idea that agency is often taken up out of necessity. This is certainly not a groundbreaking thesis: Coralie Fargeat’s 2018 aptly-titled thriller Revenge delivers a similar message in just-as bloody and gory a movie, where protagonist Jennifer (Matilda Anna Ingrid Lutz) barely clings to life as she hunts down her assailants. Yet, Mancinelli and Sims-Fewer deprive their delivery of any levity or humour or even stylistic finesse; while some moments of cinematic revenge are framed to be remembered, Miriam’s actions exist solely to further the social discourse on sexual assault. This is what justice looks like, and this is what it costs. In one of the final scenes of Violation, Miriam grinds Dylan’s remains into a paste that she sprinkles over ice cream she then serves to his family—an allusion to Shakespeare’s Titus Andronicus, in which the titular Titus grinds the bones of Demetrius and Chiron into powder to avenge his daughter Lavinia, whom they raped and mutilated. In the case of Violation, however, Miriam avenges herself.

The cultural reckoning with the narratives surrounding rape, some represented by such movements as #MeToo, has been reflected in many genres over the past several years—from psychological thrillers (The Perfection) and science fiction (Ex Machina) to Disney (Maleficent). However, it’s especially important to spotlight this reckoning’s influence on the redemption of the rape-revenge thriller subgenre, whose previous modus operandi fetishized women’s pain. In previous decades, thrillers centering on rape and revenge were rightfully considered lowbrow cinema. I Spit on Your Grave, the French Baise-Moi (translating to Fuck Me), and other rape-revenge thrillers portrayed vengeance in unnecessarily gratuitious, exploitative, and shallow manners. However, the circumstances that prompt revenge—particularly, for survivors of rape—are potent vehicles for advancing the discourse on gendered agency, power, and privilege. Violation offers a clinical perspective into the pain that motivates revenge, validating the hurt that victims of rape feel while charting the draining and painful road to regaining autonomy over the self. It’s a brutal, graphic depiction of this journey, but it’s a necessary addition to a genre that has historically degraded and demeaned its women survivors. 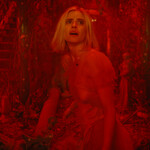