House of PainThe latest blow to the Violence Against Women Act 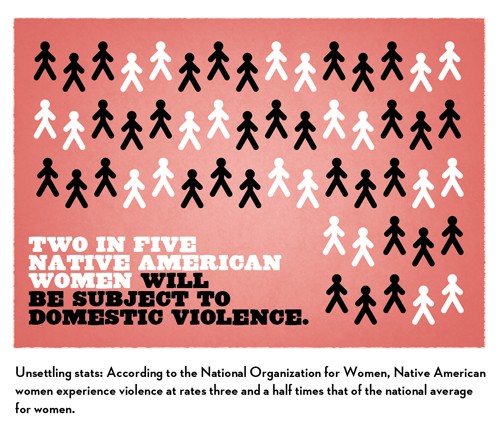 This article went to press in January 2013. A February 2013 update is at the bottom.

2012 marked the year that violence against women became a partisan issue. The Violence Against Women Act, passed in 1994, was the first comprehensive federal effort to combat such violence. The landmark law strengthened the legal response to domestic and dating violence, sexual assault, and stalking, as well as directed critical funding toward services for survivors. Over the years, it's provided more than $4 billion to local governments and nonprofits to support programs like rape crisis centers, domestic violence shelters, and legal assistance for survivors.

The VAWA has always enjoyed bipartisan support, but the law was allowed to expire for the first time ever when the 112th Congress wrapped up last January without reauthorizing it.

Why? Apparently, the problem lay in trying to extend the law's protections to some 30 million more women. In April 2012, the Senate passed a reauthorization bill that included new protections for three particularly vulnerable groups. Agencies that receive VAWA funding wouldn't be able to discriminate against LGBTQ survivors. Undocumented survivors—who often fear deportation if they come forward—would have received increased access to legal status and work authorization through special U visas. And Native American tribal courts would be granted limited authority to prosecute crimes committed by non–Native Americans on their lands.

But the Republican-led House—claiming that these provisions were “politically driven”—stripped them away when it passed its own version of the reauthorization bill last May. House leadership refused to even vote on a bill that included the tribal provision.

Considering the shockingly high rates of sexual and domestic violence faced by Native women, the House GOP's actions are nothing short of criminal. Native women are two and a half times more likely to be assaulted and more than twice as likely to be stalked as other women in the United States. One in three Native women will be raped, three out of five will be physically assaulted, and two in five will be victims of domestic violence in their lifetimes.

And as it stands now, non–Native Americans who commit these crimes are able to do so with little fear of reprisal. Tribal courts don't have jurisdiction over non–Native defendants and the federal justice system is slow to respond. In recent years, federal prosecutors have declined to take on 67 percent of the sexual abuse and related cases sent to them from Indian country.

We're not talking about a small number of cases slipping through the cracks, either. Non–Native Americans are responsible for nearly 90 percent of violent crimes against Native women, according to the Indian Law Resource Center.

And many aggressors know they can effectively act with impunity.

The Senate's bill would only partially fix the problem. While tribal courts would be able to prosecute cases of domestic violence, dating violence, and violations of protection orders on Native land where a non-Native perpetrator has clear ties to the tribe, they'd still be powerless to punish sexual violence committed by strangers. But even this small step away from relying on a negligent criminal justice system and toward empowering Native tribes to deal with violence in their own communties was a deal breaker for Congress.

In some ways, this reflects a deeper problem with the VAWA's approach to violence against women—one that is often overly reliant on the U.S. legal system. While ostensibly committed to building a “coordinated community response” to violence against women, the law privileges a pro-criminalization strategy. The original legislation was wrapped in the largest crime bill in U.S. history, and more than half of the initial funding was allocated to law-enforcement efforts. This focus means, for example, that U visas are only available to undocumented survivors who are willing to cooperate with a criminal investigation. Critics of the legislation have argued that relying on the state to protect women from violence can be counterproductive, particularly for poor communities of color. As Angela Davis asked in 2000, “Can a state that is thoroughly infused with racism, male dominance, class-bias, and homophobia, and that constructs itself in and through violence act to minimize violence in the lives of women?”

For Native women, the answer has clearly been “no.” But the Senate's bill is a step in the right direction, and now it's up to the 113th Congress to pass it. If they're serious about making the VAWA work for all women, any compromise on the tribal provision should be off the table.

The Violence Against Women Act reauthorization bill was quickly re-introduced in the new Congress. The new bill, which was passed by the Senate in a 78-22 vote on February 12, 2013, is largely the same as last year's but, in a procedural concession to the House GOP, does not include the proposed increase in U visas for undocumented immigrants. Now it's again up to the House to approve it—and again the main sticking point seems to be the provision adding protections for Native American women. House Majority Leader Eric Cantor is in negotiations with Vice President Biden, but it's unclear when an agreement will be reached—or what it will look like. Meanwhile, some House Republicans, no doubt recognizing that holding up the VAWA is not the best look for their party, are now voicing their support for finally getting it done. Follow the Save Wįyąbi Project for more on how Native women are fighting violence.

This article was published in Pulp Issue #58 | Spring 2013 Subscribe »

I don't understand the desire to delegate personal responsibility to the government. In traditional families, men protect women and children. This is common not only in previous human societies, but in most animal cultures as well. That tradition has been rejected and now women want government to protect them. That is not progress, nor is it women becoming independent. It is just substituting the government for a husband. I'll bet the same people who think the government should provide the support services of a husband to unmarried women ridicule Catholic Nuns for being the wives of Christ. It is the same paradigm.

It's a simple cold hard fact that men are physically stronger than women. When women reject male protection, the predators figure it out real fast. Stop trying to use the government to be husband, provider and protector to single women. If they don't want a husband, they should find a way to protect themselves, get training and get a gun. If they object to guns, get a dog. Predators are not that hard to discourage, but the women need to be educated that they are not victims.

As far as the hunter/gatherer societies, described in this article, where women are abused viciously, maybe we should bring them into the 20th century. It amazes me how the liberal culture defiles American culture, yet that is the culture that has promoted respect for women and women's rights. How can you denigrate the US culture, then complain because they don't force other cultures to conform to our norms? You can't have it both ways. Either you respect those cultures, warts and all, or you try to elevate them via education. Our recent passion for protecting hunter/gatherer societies instead of absorbing them is in diametric opposition to elevating their ethics, traditions and morals.

Jared Diamond's book "Guns, Germs and Steel" describes how every time a hunter/gather society encounters a "food production" society (specialized skills aka Adam Smith), the hunter/gatherer society is either decimated or absorbed into the food production society. He describes a number of societies so decimated thousands of years before the west discovered the Americas or Africa. I.e., modern western civilization did not start this mechanism. Looking at our modern society, I can't help but wonder if we aren't creating a new hunter/gatherer sub-culture in our inner-cities where welfare hunter/gatherers are segregated from the rest of society and unable to compete on an equal footing. Making people dependent on government serves no one, least of all the dependents.

Please think about it. I'm not asking you to agree with me. Do your own research in new areas. Study history. Study the statistics. Come up with some new thoughts if you don't like mine, because the old ones, where we expect the government to cure all of our ills, are not working or we wouldn't still be having this discussion for half of a century. And, there is nothing new here that I didn't read back in the 1960's. If we have not only not made progress, but have been backsliding, isn't it time to change our strategy?

"Sorry to say it, but the only group that has had success in stopping violence against women in primitive
societies are Christian missionaries"

"In traditional families, men protect women and children. This is common not only in previous human societies,
but in most animal cultures as well."

This is a literal contradiction. Unless most animal cultures also have Christian missionaries.

Orderly distribution of life-partners, resources, and elimination of resource-gap is the socialogical function which allowed
Christian missionaries the above asserted "powers to stop domestic violence".

Then the only argument becomes one of blind authoritarianism and conformity.
Does the "traditional family" actually cure domestic violence and sexual abuse, or does it simply refocus it internally,
to the Wife and Kids themselves? Barring that, legally, does it then refocus it onto the next nearest legally/physically/spiritually vulnerable target?
One might argue that marraige does not stop rape and abuse, it simply re-assigns
it to one woman (or man) as opposed to many. Institutionalizes it, if you will.

This argument does not propose that traditional families are the cause of these things, simply that they can
neither be touted as a be-all-and-end-all solution.

"When women reject male protection, the predators figure it out real fast."

Why? And How? Do the same Christian traditional family views also give rise to the need to punish those who
choose to live without them? I.E. does the (poor) christian woman then gossip and socially attack the single woman.
Create in effect, a self-fulfilling prophecy?
Look at her, going around all full of herself, looking better than me, richer than me, and happier than me, "she'll
get what's coming to her, then she'll learn the value of traditional ways." Sound familiar?
Say it enough times to enough people, and your husband may even be the one who rapes her, or his drinking buddies.
Then the only question becomes, are you forgiving him because God is forgiving, or because you are secretly
pleased with the outcome?