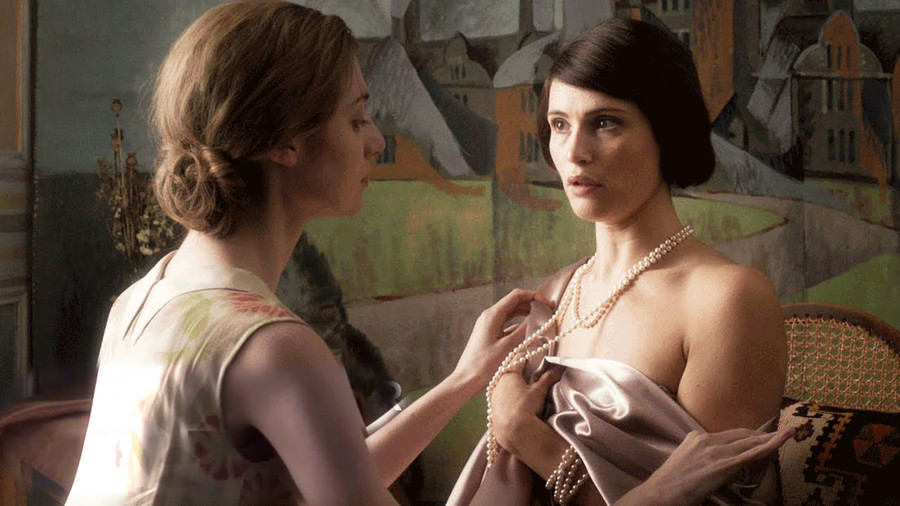 A lesbian period drama illuminates all manner of historical disparities, and among them is this discernment: getting naked, precoitus, has grown logistically easier with time. In the 2019 film Elisa and Marcela, which takes as its premise Spain’s first gay marriage, Elisa (Natalia de Molina)—who typically dresses in feminine garments—disguises herself as a man so that the couple can wed in a Catholic Church. Their first onscreen love scene is an exercise in dramatic black-and-white aesthetics and terrible patience: There are skirts, more skirts, and two rigid corsets that must be diligently unlaced before the women can—finally—press their bodies together, unmediated. The effect, paradoxically, is simultaneous resonance and strangeness: this fin-de-siècle depiction of lesbian sex renders a recognizable desire in an alien context.

Increasingly over the last four years, we’ve been watching women in petticoats—and other erstwhile undergarments—declare their love for one another. Carol, the exquisite 2015 drama adapted from Patricia Highsmith’s The Price of Salt (later republished as Carol) can be credited for initiating this niche, but robust trend. The Handmaiden followed in 2016, adapting Sarah Waters’s Fingersmith into a lush, whetted erotic thriller. The Favourite (2018), which chronicles an 18th-century lesbian love triangle between England’s Queen Anne (Olivia Colman), Sarah, Duchess of Marlborough (Rachel Weisz), and Abigail Masham (Emma Stone), garnered excitement for its frank, bawdy humor and nuanced rendering of feminine intimacies and betrayal.

Colman won an Academy Award for her role, and in a frenzied synthesis of eros and thanatos, droves of queer women begged Weisz to step on our throats. Colette, also released in 2018, dramatizes the exploits of bisexual French writer Sidonie-Gabrielle Colette (she is widely known by her surname). Wild Nights With Emily (2018) imagines the relationship between poet Emily Dickinson and Susan Gilbert; Lizzie (2019) does the same with Lizzie Borden and Bridget Sullivan; and Tell It to the Bees (2018), based on Fiona Shaw’s 2009 novel, also contributes to the recent glut of sapphic historical narratives. Then, in 2019, the BBC One series Gentleman Jack, which chronicles the sexual pursuits of 19th-century diarist Anne Lister and her courting of Ann Walker, premiered to considerable fanfare.

Elisa and Marcela dropped on Netflix and, most recently, Vita and Virginia—Chanya Button’s portrayal of the romance between novelists Virginia Woolf and Vita Sackville-West—was released in the United States. Among this thicket of lesbian period amours are several stories based on historical figures, although the degree of creative license varies. Much of the dialogue in Vita and Virginia is scooped directly from love letters exchanged between the writers—which, unfortunately, makes for a rather cumbersome screenplay. If you’ve ever read Woolf’s prose, this will not surprise you: Her writing is sumptuous, always precise, and she could craft a paragraph-long—lucid, grammatically pristine—sentence. Nobody in the film recites pages from Mrs. Dalloway as a casual aside, thank goodness, but many of the exchanges between characters are stilted and effortful, replete with name-dropping and hamfisted articulations of Bloomsbury aesthetic philosophies.

The burgeoning interest in queer romances of yore has already generated significant interest, and their collective popularity makes sense. It is both satisfying and validating to recognize oneself as part of a long, historical tradition, particularly when your identity is structurally denied and condemned. When I taught a college course in queer literature, I began with the poet Sappho. She is, of course, important to literature; but moreover, her work demands cultural recognition that women have always fallen in love with each other. And after centuries of narrative suppression, there are bounteous stories to tell. As Annie Lord writes in a July 2019 story for the New Statesman, “The current wave of these dramas perhaps has its roots in a contemporary desire to re-establish queer histories that have often been erased.” Lord also suggests that these films supply viewers with a safe, unchallenging sense of open-mindedness without the necessity of confronting their extant limitations.

“The vast majority of modern audiences would maintain that gay figures from history faced discrimination,” Lord notes, “even if they hold more divided views over the LGBTQ movement today.” One can enjoy a cozy sense of left-wing righteousness by cheering for The Handmaiden’s Hideko (Min-hee Kim) and Sook-Hee (Tae-ri Kim) as they beat the odds without facing any inconveniences attendant to centering queer women of color in present-day quotidian life. These movies also don’t confront viewers with more recent atrocities of homophobia that demand our attention, whether fictional, in the case of Desiree Akhavan’s 2018 adaptation of The Miseducation of Cameron Post—in which the titular character is forced out of her life and into gay conversion therapy—or crises like the high suicide rates among transgender teenagers or the ubiquitous surge in homophobic and transphobic hate crimes.

There’s an accompanying anxiety to screening queer cinema, because our options are finite, and we cannot assume that there will be more choices in the future.

Yet, even with the luxury of temporal distance, where homophobia registers as a mark of primitivism, Hollywood is still disinclined toward telling queer stories—particularly ones that stray from the well-traveled coming-out narrative. Despite a present fascination with historical queer women, and a relative surfeit of resulting media, films and television series featuring queer characters are still relatively scarce, and generally the actors who snag the roles are heterosexual ciswomen. (Most of the actresses involved in the productions I listed above are, to my knowledge, straight.) This is frustrating: We know there are droves of talented queer women seeking work in film and television, and the magnitude of representation must never be diminished.

Like any warm-blooded bisexual I marveled at Rachel Weisz’s red latex domme-chic Oscars gown, but I am well aware that her very queer role in The Favourite could have been skillfully executed by someone from the community. Ditto her character in Disobedience (2018), and ditto Keira Knightley, in her portrayal of Colette. It is also aggravating to feel as if queer media has no room for missteps. Due to its scarcity, I feel compelled to approach these films with agitated and grandiose expectations, demanding everything I’ve been missing. When I watched Vita and Virginia I scribbled in my notes “How is this movie so bad?” Woolf is one of my favorite authors, so it’s unsurprising that I came to this particular film with chomping-at-the-bit excitement and demanding expectations.

To be a queer woman searching for narratives that seem both legible and authentic, to think you have found one, and for it to fail you is irksome, and, at times, heartbreaking. After Vita (Gemma Arterton) gives Virginia (Elizabeth Debicki) an orgasm, the latter muses, “I wonder if death feels anything like that,” at which point I nearly threw my laptop across the room (Hogarth Press, run by the Woolfs, published work by psychoanalyst Sigmund Freud, so this line, I assume, was a little nod to his theory of the death drive. It was also, like so much of the movie, absurdly heavy-handed). Debicki portrays Woolf elegantly: She is tremulous, passionate, and haunted, but the script offers her paltry material, and the incandescence of the missives shared by Woolf and Sackville-West is never developed onscreen. But my frustration doesn’t stem from annoying literary snobbery—I am weary of needing so much from every film focused on queer female love.

What an extravagance it would be to shrug my shoulders at Vita and Virginia or some other film that missed the mark and then choose from 100 other options that I haven’t already watched multiple times. So what if the director of Elisa and Marcela decided that one of its sex scenes ought to involve a dead octopus? There is freedom in failure because it implies a multitude of opportunities. After all, we often speak of straight white men failing upward, as if choice and success are firm guarantees, although an individual’s performance seems to spurn that promise at every turn.

There’s an accompanying anxiety to screening queer cinema, because our options are finite, and we cannot assume that there will be more choices in the future. Consequently, we want to champion everything: We want each film or television episode to represent us eloquently and poignantly. We don’t want The L Word: Generation Q to be riddled with missteps and hokey jokes—(okay, I admittedly do appreciate cheesy L Word quips)—because we’re always waiting with bated breath for narratives that prioritize us. We’re still scavenging through the dregs on our screening services, reaching for forms of love and desire that are legible to us. The lesbian classic But I’m A Cheerleader may be one of my favorite films, but now and then I do want to watch something else.

In the meantime, the gravitation toward historical lesbians continues apace. Over the coming year, we can expect at least four additions to the genre: Portrait of a Lady on Fire, an 18th-century drama that made waves at the 2019 Cannes Film Festival; Carmilla, based on the Victorian novella by Sheridan Le Fanu, and already adapted as a popular web series set in present day; Ammonite, also set in the 19th-century and starring Kate Winslet and Saoirse Ronan; and Benedetta, based on Judith C. Brown’s 1986 work of nonfiction, Immodest Acts: The Life of a Lesbian Nun in Renaissance Italy. Perhaps, under the circumstances, a little optimism is warranted; perhaps they forecast an enduring proliferation of queer narratives. Perhaps, if I don’t like these films, I can safely shrug my shoulders, because it won’t matter as much as it seems to now.

Read this Next: Cover Story