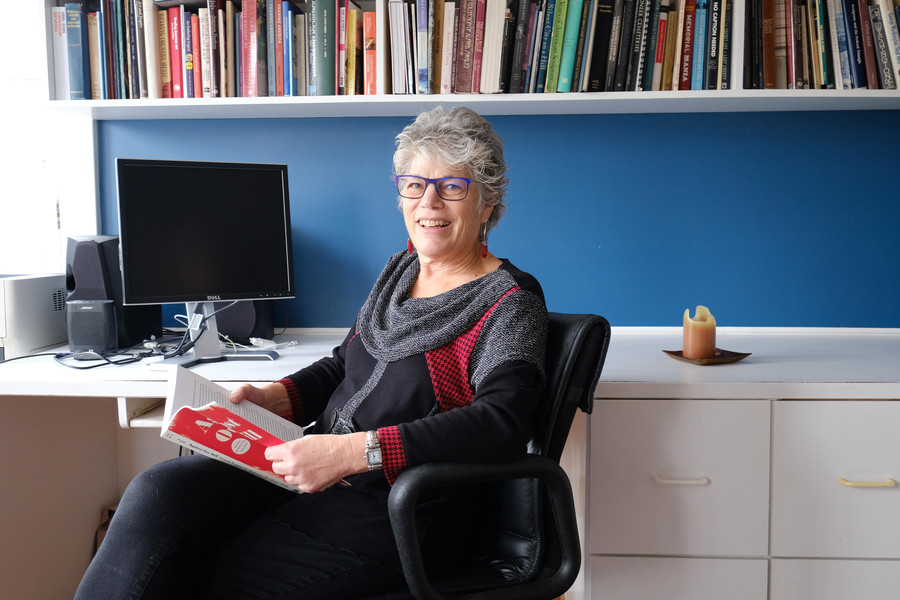 Decades before the #MeToo movement, feminist artists created works that challenged social and legal definitions of rape and incest, demanding an end to the silence surrounding sexual violence. In Against Our Will: Sexual Trauma in American Art Since 1970, art historian and PTSD scholar Vivien Green Fryd traces this decades-long radical intervention from the 1970s to today, highlighting the works of artists like Suzanne Lacy, Leslie Labowitz, Faith Ringgold, Judy Chicago, and Kara Walker as part of a cyclical and powerful anti-rape and anti-incest counternarrative. These works of art critique sociocultural and political patriarchy, insisting that we continually acknowledge and address sexual trauma. Against Our Will reprises the title of Susan Brownmiller’s 1975 Against Our Will: Men, Women and Rape, picking up where the history left off to explore the legacy of sexual violence in art.

Against Our Will challenges us to witness without looking away, exploring sexual violence as a discrete subject of American art with unflinching analysis. I spoke with Fryd about the heroic rape tradition in Western art, art as protest, “Carry That Weight,” and the impact of these works on our cultural understanding of sexual violence.

How did this book come about?

I started it about 16 years ago. I was inspired to write [it after] seeing works of art in person by [Suzanne Lacey and Judy Chicago.] I was blown away. That was the inspiration to start the book, but it also had to do with the fact that I myself am a survivor of incest. The writing of the book was my healing journey in many ways, but also [helped] bring the subject to the foreground.

The book is timely now, and I’m grateful because it would’ve been ignored back then and it wouldn’t have been as good. Now it has such resonance. [Sexual assault] is unfortunately something that too many of us have experienced, and in spite of the #MeToo movement, we’re still not talking about it.

I teach at Vanderbilt University, and we know the statistics of the number of rapes that happen on college campuses. Whether or not any of my students have experienced something, I don’t know, and it’s not that I should know. But somebody [wouldn’t] come into class and say, “I’m having a hard time right now because I was raped last night.” I’ve been teaching for almost 40 years, [and] I’ve never had anybody tell me that. It’s such an important issue for everybody to be aware of. I hope my book contributes to this awareness, helps change attitudes, and encourages discussion and recognition to end the silence.

I was really interested by your description of this art as cyclical. How would you describe where we are in that cycle?

It began in the 1970s with the second wave of feminism and the rape crisis movement, when artists in Los Angeles created powerful performances [on] the subject of rape. [That] had not been addressed in the history of art before—at least not in the way that these artists were dealing with it. And then at the end of the 1970s and the beginning of [the] 1980s, artists connected with the Woman’s Building in Los Angeles continued this cycle, primarily focusing on the subject of incest.

Over and over again, artists are dealing with these troubling topics from the 1970s to the present. Some of these [same] artists have returned to their subjects in the beginning of the 21st century to show how the need to end the silence about rape is still necessary. There are many, many different artists who are dealing with [these] subjects in different media—performance, video, quilts, and silhouettes—and this cycle continues into the present.

People may be familiar with Emma Sulkowicz. She was a student at Columbia University who claimed to have been raped in her sophomore year. Columbia found her perpetrator innocent, and she created a year-long performance called “Carry That Weight” in which she carried a dorm mattress to all of her classes. She even carried it to her graduation. Many students joined her and carried mattresses and held protests, [and] then it went viral, and students at other universities also carried mattresses. I would argue that the #MeToo movement that has gotten so much attention is really a continuation of what began in the 1970s. 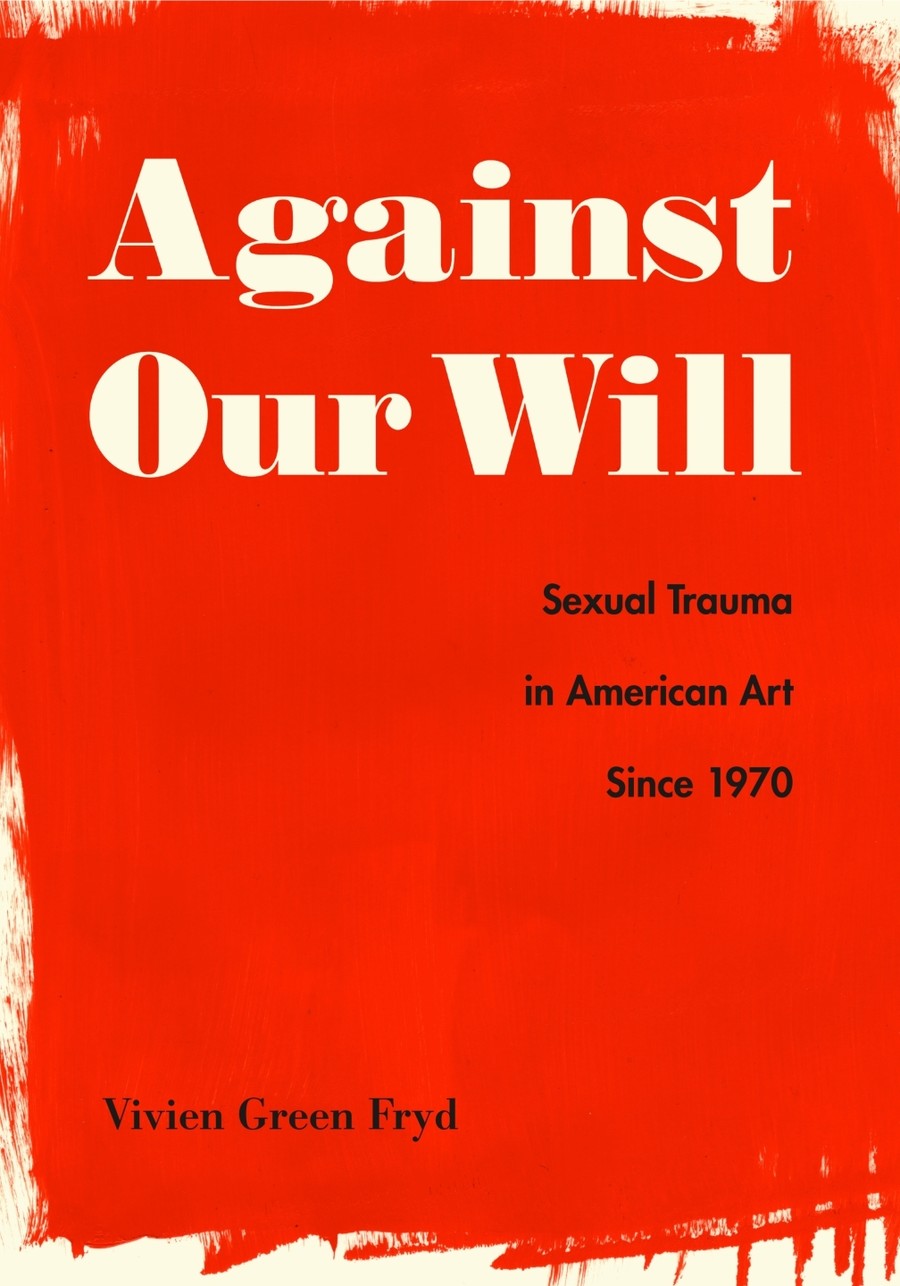 Against Our Will: Sexual Trauma in American Art Since 1970 by Vivien Green Fryd (Photo credit: Penn State University Press)

How do you see the continued impact of #MeToo on the art world?

It’s hard to say how it’s affecting the art world because it’s happening right now. I do know, for example, that the College Art Association, which is the annual professional conference for artists and art historians, had a daylong series of panels dealing with this subject. Some artists did performances dealing with rape. Certainly, people are continuing to do these works, but I think the #MeToo movement and the works of art are coexisting.

Is there a work of art you discuss in the book that feels particularly relevant or resonant now?

Suzanne Lacy and Leslie Labowitz did a performance called “In Mourning and In Rage” in 1977. It was a daylong performance in which about 60 women participated. They were protesting [in support of] the 10 women who [were victims of the “Hillside Strangler”] and the fact that there was so much press about these women, the suggestion being that they were prostitutes who were asking for it. The media was exploiting this, contributing to and encouraging [people] to think [of] this in romantic terms rather than the horror that it really is.

[The artists] created this powerful performance in which they had hearses that came to the Los Angeles City Hall, and they invited politicians and the news media to be present. They gave statistics about rapes in Los Angeles and throughout the United States, advocated for changes in the legal system, and asked for places where sexual violence centers’ phone numbers would be published in the phone book. It was a very powerful work that would have resonance today. 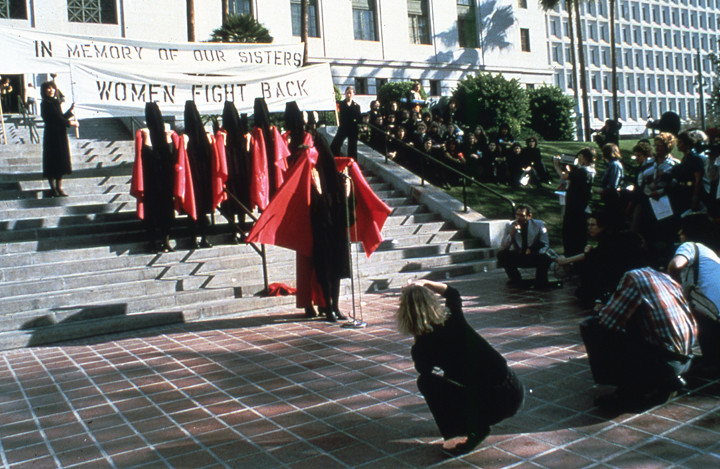 "In Mourning and In Rage" (1977) (Photo credit: Suzanne Lacy and Leslie Labowitz)

You draw the distinction between art that glorifies and aestheticizes rape and art that challenges the viewers to acknowledge sexual trauma. How do you see that distinction?

When I talk about the heroic rape tradition, I’m talking about the fact that during antiquity, many images deal with rape, primarily taken from mythology. The subject re-emerges in the Renaissance, continuing into the present, and it’s primarily male artists who are rendering historical, mythological, and biblical subjects in which a rape occurs. But in these paintings or statues, you’re not actually seeing the act of rape. Furthermore, the man is seen as an idealized figure, and the woman is seen as trying to run away or sometimes thinking that it’s pleasurable. But the paintings were never discussed [by art historians] in terms of what exactly is being shown.

In the Venetian Renaissance Titian created a well-known painting called “The Rape of Europa.” It’s based on the myth [in which] Zeus turned himself into a bull, captured the goddess Europa, took her to the island of Crete, and they had three children. The painting shows a beautiful white bull flying in the sky with a beautiful nude female figure riding on his back. It’s set against an ashy blue seascape and sky that merge together. Art historians typically talked about the painting in terms of the subject,

[But] nobody ever said, “Wait a minute. When Zeus takes Europa to the island of Crete, how does he father three children? He rapes her.” The title tells us [Europa was raped]. But the painting [suggests] that this nude woman riding on the bull is like, “Oh, yay! We’re flying in the sky, going on an adventure.” It belies what the subject is implying.

Can we escape the heroic rape tradition of Western art, given that it continues to be reified in Western Civ and Art History classes?

That’s a fascinating question. It has to do with all kinds of art. For example, Renoir: Everybody loves Renoir. But if you pay attention to his representation of female nudes, they’re actually quite objectified, sexualized, and eroticized. They aren’t human beings who have any thought. They’re just pretty bodies and pretty heads. In fact, as he moves along in his career, the heads get smaller and smaller. We have a quote from Renoir in which he says, “I paint with my prick.” Now, do we as viewers say, “I can’t look at Renoir because of what he said?” I would argue that we don’t ignore these paintings; they’re canonical in the history of art. But I think we need to discuss what the paintings are representing. Let’s talk about the acceptance of it and how problematic that is.

I took a political activist approach in writing the book in the same way that the artists took political and strategic actions in creating the works of art in order to end the silence.

You point out in the book that art has long been a sphere where women have protested against their exclusion in galleries and museums.

In the 1970s, women began to hold protests at the Whitney Museum, the Museum of Modern Art in New York, at the San Francisco Museum of Modern Art, and at the Los Angeles County Museum. They were protesting the fact that women were not included, and then they began to talk about the images: “Wait a minute. These images are really problematic.” So, you have art historians, for example, who were talking about Picasso’s “Les Demoiselles d’Avignon” being located in the Museum of Modern Art (MOMA) in New York City next to De Kooning’s “Woman #1.” Both of them are really problematic representations of the female body and of women. Articles were written [about taking] a look at these paintings that are rarified and are placed in the museum, and examining how problematic they are and the artist’s intentions.

The #MeToo movement is late in the game to be doing this. But in fact Sulkowicz’s newest performances have been to protest Chuck Close, who has been accused of inappropriate behavior with his models. So, Sulkowicz has done some performances in front of his works at MOMA. This has been going on in the history of art for quite some time.

It seems to me like so many people don’t know about this important history. Is there a repository of this knowledge?

I hope that my book is the repository. Although it doesn’t focus on the heroic rape tradition, it talks about the heroic rape tradition as what the artists I’m discussing are protesting against and creating a counternarrative [in response to]. I took a political activist approach in writing the book in the same way that the artists took political and strategic actions in creating the works of art in order to end the silence. I’m hoping my book can contribute to that.