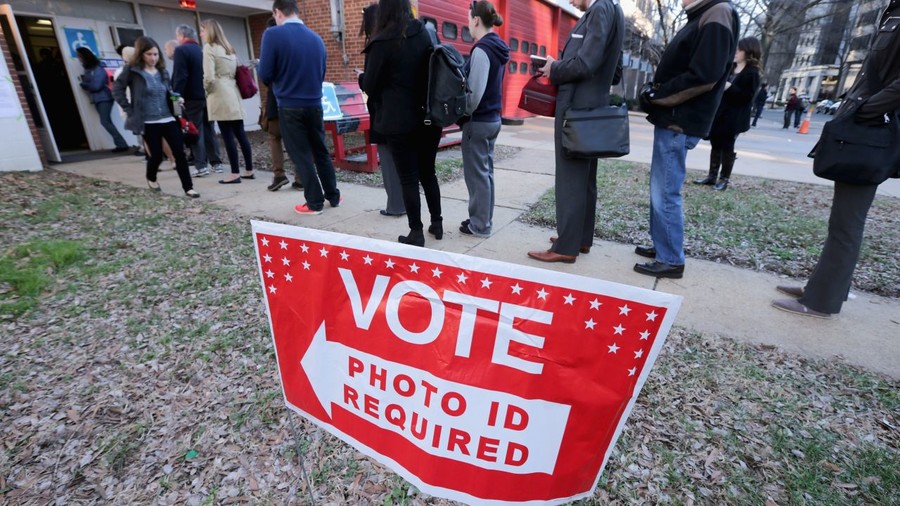 Virginia voters line up to cast their ballots in Arlington, Virginia, on Super Tuesday, March 1, 2016. (Photo by Chip Somodevilla/Getty Images)

This story was originally published on November 2, 2016.

In 1981, New Jersey Republicans singled out voters of color at the polls. Under the guise of preventing voter fraud, the GOP enlisted off-duty sheriffs and police officers—wearing “National Ballot Security Task Force” armbands and sometimes bearing visible firearms—to stand outside polling stations in precincts that had a high percentage of minority voters. GOP representatives attempted to muscle the outcome of the election by telling minority voters they were ineligible to vote in a tight gubernatorial race. After New Jersey Democrats filed a lawsuit in 1982, the New Jersey GOP agreed to a consent decree that radically limited the scope of their poll-watching activities. The decree has stood the test of both time and court challenges: Thanks to their bad faith efforts in 1981, Republicans are barred from poll-watching activities that could result in voter intimidation. This kind of voter suppression wasn’t a one-time thing: During the 1986 Congressional elections, the Louisiana GOP mailed letters to African American voters around the state and then tracked which letters were returned as undeliverable. They used those returned letters to write up a list of individual voters who they might be able to disqualify.

These days, using voter registration lists to generate targets for voter suppression sounds almost quaint. In this high-stakes election, we’ve got the notoriously extremist antigovernment Oath Keepers pledging to mobilize “incognito intelligence gathering and crime spotting teams” to prevent election fraud by targeting underrepresented voters, Pennsylvania Republicans suing to expand the reach of poll watchers on Election Day, Nevada’s secretary of state dismissing concerns from Natives who are forced to travel 200 miles to vote, Democrats suing the GOP over Donald Trump’s “election observers,” and even The Economist voicing concerns about whether Trump’s rhetoric is crossing the line into incitement. It’s the 21st century, and voter suppression has leveled up.

In a way, the United States was built on voter suppression from its very start. In the country’s earliest days, Congress decided every slave counted as three-fifths of a person (and certainly not as an eligible voter) for legal purposes and denied the franchise to women, people of color, Natives, and anyone else who wasn’t a white man who owned property. While 1920 is the much-vaunted date of “universal suffrage,” the reality is much bleaker. Native Americans had to file suit in 1948 to protect their voting rights despite theoretically gaining the franchise in the 1920s. Asian Americans couldn’t become citizens, let alone vote, until 1952. The Voting Rights Act of 1965, meanwhile, targeted common voter suppression tactics used to keep the Black community from voting.

Even after the right to vote was formally extended to all Americans (except felons in many states, underage citizens, and people with certain disabilities), that didn’t mean people were able to vote. Barriers to voter registration and election participation including poll taxes, literacy tests, residency requirements, and whites-only primaries made it difficult and sometimes impossible for some Americans to participate in elections. By targeting the Black community, these schemes hoped to manipulate election outcomes by cutting some voters out of the process entirely. 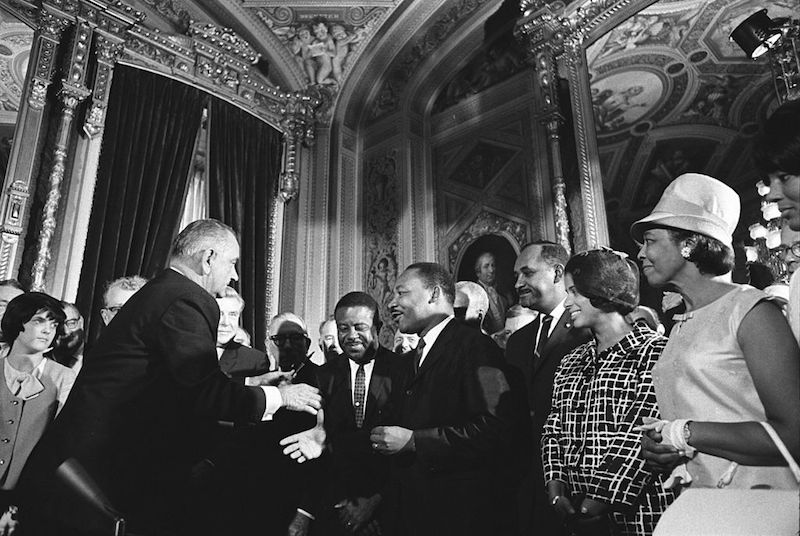 The Voting Rights Act of 1965 was meant to change that, abolishing the most glaring practices of voter suppression in America and paving the way for a country in which one person, one vote could be a reality instead of an ideal. As with other landmark civil rights legislation of the time, though, it reflected the fact that you cannot legislate racism away—you can only attempt to fight its most overt forms, leaving the contagion to happily thrive sub rosa, or perhaps de facto in this instance. And thanks to 2013’s Shelby County v. Holder, the Voting Rights Act isn’t even what it used to be; the Supreme Court gutted some key provisions, including the framework once used by the Department of Justice to dispatch federal observers to polling places to protect the rights of historically marginalized voters. Now, said observers can only be dispatched in smaller numbers to specific sites.

This all sounds rather dry and boring, which was precisely the goal for the people who created restrictions on voting rights: If you lawyer people to death, they don’t have time to go to the polls on Election Day. Behind decades of litigation, regulation, and legislation lies a tormented, painful, and bloody history of fights for voting rights. In the 1950s, Black voting organizer Asbury Howard was beaten in front of an indifferent crowd of policemen for attempting to register Black voters, for example. In 1964, voting rights activists were murdered during Freedom Summer.

Voting rights, and election interference, are often sexed up in pop culture. Defiance, Ohio in Scandal. Heavy breathing and intrigue in Primary Colors. Donna trying to trade votes in The West Wing. 2015’s Suffragette, heavily criticized for failing to include the voices of anyone other than prominent white voting rights activists. The extremely assertive Tracy Flick in Election. The internecine drama of The Way We Live Now. The crumbling idealism of Gore Vidal’s The Best Man. Edgar Allan Poe’s bizarre death in what some claim was a state of alcohol poisoning related to “cooping,” in which people would vote repeatedly in disguise, merrily drinking the alcohol handed out to voters (yes, really) all the while. The reality is often much more mundane and more sinister.

Republican activities in New Jersey in 1981 reflected a shift in the way people thought about voter suppression, relying on the right to “challenge” questionable voters at the polls since it was no longer legal to exclude them legislatively. But it was the tide of voter identification laws and other restrictions on voting rights of the 21st century that began to fundamentally reshape the landscape. The Brennan Center for Justice describes them as a “wave,” and Lawrence Norden, deputy director of the Brennan Center’s Democracy Program, called their scope “unprecedented.” These laws include voter ID requirements, limits on early voting, checks on absentee voting, and registration restrictions—and a lot passed just in time for the 2016 election.

These measures, ostensibly put in place to prevent “voter fraud,” are naked attempts at voter suppression, bearing the hallmarks that should have everyone concerned. Aside from the fact that research has repeatedly demonstrated voter fraud is a nonissue and such legislation is unnecessary, these laws are very deliberately crafted to target people of color, low-income people, and disabled people—and we know this because of a case surrounding voting restrictions in North Carolina that went after Black voters with “surgical precision,” in the words of the court. These targeted groups, not uncoincidentally, tend to skew Democratic. That’s something Indiana officials took advantage of last week when they raided a massive voter registration drive initiative, claiming “fraud.” That initiative primarily served Black voters, an estimated 45,000 of them. Meanwhile, on Monday, the North Carolina NAACP sued over illegal voter purges also targeting the Black community.

Even as we fight the new wave of de jure voter suppression tactics, though, Republicans aren’t letting the matter rest: They’re taking advantage of the legal right to act as election observers in the hopes that they can cloak suppressive activities behind electoral freedoms. While it’s getting a lot of press this year, poll watching has been growing in strength and numbers since 2000, when many Americans were disappointed by the outcome of the election. Nonpartisan volunteers can improve the integrity of an election, but bad actors can have the opposite effect.

This is not hyperbole or speculation. Trump has been extremely transparent both about his motive for demanding poll watchers (to prevent a “rigged election”) and what he wants them to do there (in the words of a supporter, the goal is to “make them a little bit nervous” if they “can’t speak American”). The situation is becoming so painfully blatant that Democrats are, as discussed above, suing: They’re arguing that RNC support of Trump’s poll watchers amounts to a violation of that 1982 consent decree.

This terrifying form of voter suppression may work precisely as designed as the desperate last gasp of a campaign, and a party, on its knees. Even with nonpartisan groups like Election Protection and the Department of Justice swarming on the ground to protect voting rights, it’s hard to predict how many voters will be challenged at the polls—and how many of those challenges may turn violent.