Witches Are Ushering In Spring On Walpurgis Night | Bitch Media

Untethered WomenWitches Are Celebrating the Resiliency of Spring

Walpurgis Night, or Walpurgisnacht in German, has traditionally been celebrated in northern Europe and Scandinavia on the evening of April 30. It’s named for Saint Walpurga (sometimes spelled Walburga), an English 8th-century abbess—basically a nun queen. When Walpurga was 11, her father left her to be raised by the nuns of Wimborne Abbey in Dorset, England. Walpurga eventually gained prominence in Germany for her missionary work converting pagans to Catholicism, and was canonized on May 1, 870. Though Walpurga is not directly connected to witches, it could be argued that the miracles she performed during her life— like successfully using prayer to calm the sea during a storm, which led her to being named the patron saint of sailors—were pretty darn witchy.

The traditional lighting of bonfires on Walpurgis Night served to keep animal predators away as townspeople transferred their livestock to summer pastures, and general merriment was stoked to celebrate the return of the sun and the coming of the warmer half of the year. Winter and summer were considered the two main seasons, and both the transition to winter—Samhain, the ancient Celtic predecessor of Halloween—and summer were seen as points when the veil between the physical and the spiritual realms was at its thinnest. On May Eve, another of Walpurgis Night’s names, this meant the time was right for the crossing of supernatural beings such as faeries. 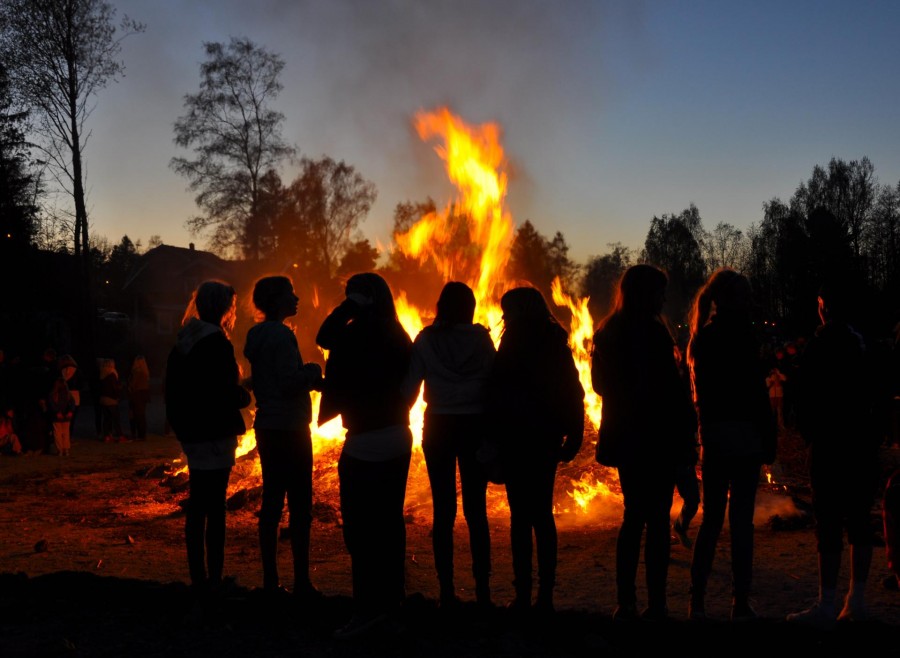 According to Encyclopedia Britannica, “Soon after [Saint Walpurga’s] death, memory of her seems to have become confused with that of Waldborg, a pre-Christian fertility goddess.” In “From Veleda to the Volva: Aspects of Female Divination in Germanic Europe,” Kees Samplonius’s 1995 essay about female divination in Germanic Europe, they write, “Scholars have indeed found that the lives and cults of some of the female saints have overtones of earlier fertility cults … [one scholar notes that] the symbol of ears of corn with which Saint Walburga is depicted ‘seems to have been borrowed, along with other detail, from an earlier fertility cult, that of Walborg or Walpurg, the earth goddess.’”

It’s plausible that the day chosen to celebrate Saint Walpurga was an attempt at subsuming an earlier pagan holiday, and that Walpurga herself may have been prefigured by an ancient goddess of a similar name. Encyclopedia Britannica tacitly supports this theory:

It wasn’t until the 16th century that Europeans began to associate Walpurgis Night with witchcraft; villagers would kill hares because they believed they were shapeshifting witches. In Germany, the 1668 publication of a book by Johannes Praëtorius propelled the idea (contrary to evidence from witch trials of the era) that witches gathered for ritual at the Brocken, the highest mountain peak in Northern Germany, to dance naked in front of bonfires, commune with Satan, and have sexual encounters with goats. (Pretty much how Mike Pence must imagine a day at Planned Parenthood!)

As with claiming “witch” as an identity, there may also be a reclamatory aspect to celebrating Walpurgis Night.

Johann Wolfgang von Goethe went on to dramatize the link between witches, the Brocken, and Walpurgis Night in his 1808 play Faust. The Harz Mountains, in which the Brocken is located, writes Thomas Peter for Reuters, “were one of the last places in what later became Germany to convert to Christianity, and the area is characterized by dark pine forests and eerie rock formations.”

These days, Europeans celebrate Walpurgis Night by lighting bonfires and singing springtime songs. Finns drink sparkling wine and mead and go picnicking, while Germans dress up in costumes and play tricks. There is even a tongue-in-cheek festival at the Brocken on Walpurgis Night to celebrate the area’s witchy history. Walpurgis Night festivities are for many Europeans akin to the revelry of Halloween in the United States, Canada, and Ireland.

Honoring Walpurgis Night also has spiritual significance for many witches today. It doesn’t escape 21st-century pagans that Walpurgis falls on the eve of Beltane, an ancient Celtic holiday that welcomes spring on May 1 and is a cornerstone celebration of many Celtic-based pagan faiths. Some pagans celebrate both holidays, seeing Walpurgis Night as the loosely Germanic version of Beltane.

But why would modern witches celebrate a holiday that for many centuries was associated with decidedly Christian beliefs—namely, an obsession with Satan?

Perhaps, as with so many other neopagan attempts at laying claim to history, there’s a yearning to connect with anything labeled witchy in the absence of records of the pre-Christian past. As with claiming “witch” as an identity, there may also be a reclamatory aspect to celebrating Walpurgis Night as a witch: Now there really will be witches dancing on the mountain, and doing so without fear of theocratic, state-sanctioned misogynist persecution.

At a primal level, there’s something powerful about laying claim to a legacy of wild, untethered women, regardless of whether the fear-based legends about them are true. We know that  women have been punished for such things and less for millennia, and for many, Walpurgis Night offers an unapologetic celebration of the resilience and survival of female creative and sexual energies. Even if Walpurgis Night revelers aren’t rooting for Satan, they’re rooting for that untamed, whirling female power and sexuality that have for so long been scapegoated as evil. What better way to celebrate spring?

No Religion is Uniform