Weapons of Mass DistractionThe Bikini Turned Sexuality into a Threat 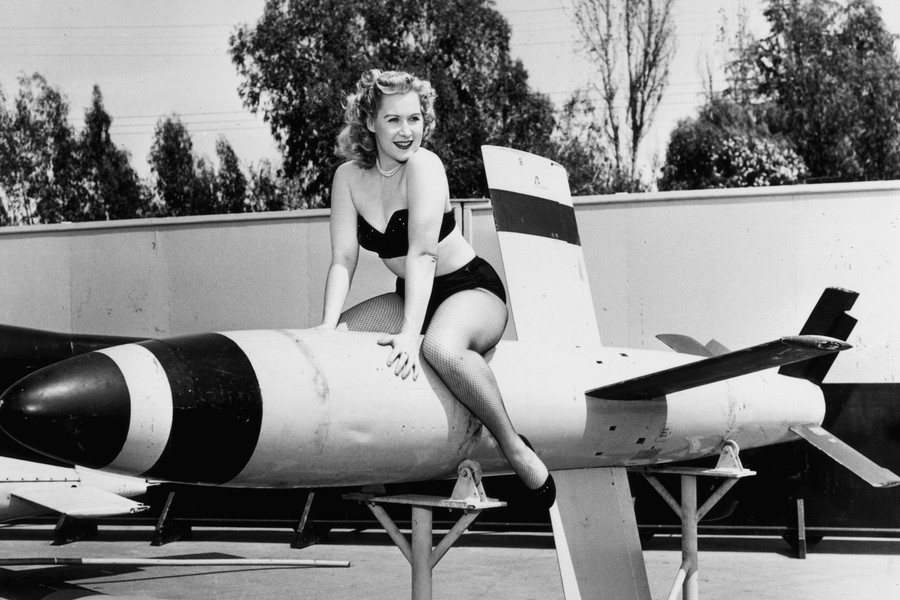 One sun-baked morning in Cannes, as vacationers ordered their mimosas and stretched out in beach chairs, an airplane rumble joined the sound of waves lapping and glasses being set down on tables. Subathers tipped up their faces to find a message smoking in the sky: “Atome—the world’s smallest bathing suit.” Some weeks later, another plane made its way across the French Riviera, this time hired by a competitor. “Bikini—smaller than the smallest bathing suit in the world,” the skywriter wrote. The intrigue had begun. The bikini made its debut in 1946. After a long war filled with air raids and rationing books, Europe was experiencing its first conflict-free summer in five years. Needing a return to normalcy, people packed up their cars with coolers and colorful beach umbrellas and headed off for weekends full of sea and sun.

Designer Louis Réard was one of those people, and it was in the French Riviera that he noticed that, after an afternoon of sunbathing, women would sit up and roll down their two-piece suits to get better tan lines. Inspiration struck, and he soon designed a piece that revealed “everything about a girl except for her mother’s maiden name.” Réard debuted his creation, made from a scant 30 inches of fabric, at a Paris poolside press show on July 5, 1946. No model was willing to touch it, so Réard did the only sensible thing he could: He hired a Parisian showgirl named Micheline Bernardini to showcase it. Much to the shock of the press, she fit the suit into a matchbox that she was holding in the palm of her hand. The world was agog. There was pandemonium. Jayne Mansfield and Marilyn Monroe might have regularly worn two-pieces in pinup photos, but they never put their belly buttons on display.

From the moment it debuted, the bikini was a scandal. The Vatican declared the garment sinful, and it was soon banned across Europe, including Italy and Spain. Brazil’s Rio de Janeiro, these days known as the land of thongs, banned the bikini from its beaches (along with something called “Hollywood kissing”). In the United States, public swimming pools put up signs with big red block letters spelling out “No Bikinis.” It was like a bomb went off, and people were scrambling to minimize its damage. But that was exactly Réard’s intention. He wasn’t the first designer to create the bikini; in fact, he was in an arms race with another French designer, Jacques Heim, to create the world’s tiniest swimsuit. Heim launched the Atome—named in homage to the tiny, newly discovered atom—which was small, but still covered the wearer’s navel. Réard dared to go even lower, and the bikini he revealed three weeks left Heim’s Atome in the dust.

Réard was sure his itty-bitty two-piece would be as explosive as a war bomb, which is why he named his design after the remote island Bikini Atoll, where the U.S. military performed news-making atomic bomb tests that very week. “In 1946, France had just come out of the war and people had need to live again. I felt I had to design something that would make people understand that life can start over and be beautiful,” Réard told The Dispatch in 1974. “At that time everybody spoke of the island of Bikini in the Pacific, enchanted, tiny, fine sand, a paradise. The idea came to me to make a swimsuit tiny like that island.” Réard loved the scandal, and kept it alive by claiming a two-piece wasn’t a bikini unless “it could be pulled through a wedding ring.” Magazines dubbed it “four triangles of nothing,” and one San Diego lifeguard who saw it in action said a “bikini bathing suit is just two patches and a prayer.”

The swimsuit first made its way to the United States through Hollywood, where it was introduced in a country club benefit show in 1949. As an ironic jab (and cautionary tale for women reading about it at home), the models were gifted encyclopedias at the end. Interestingly enough, many men didn’t like the itty-bitty suits and were vocal about their disapproval. “The sooner women become aware of the fact that all they’re going to catch in a Bikini swimsuit is a cold, the sooner they’ll make a favorable impression on the men folks,” the Rocky Mount Telegram wrote in 1949. “I encountered the Bikini two years ago, in Capri. I spent the first day blushing, the second day bored, and the third day rather mildly annoyed at womanhood in general,” a journalist for the Honolulu Advertiser wrote in 1949. “After first blush at the prospect of so much goose-pimpled femininity hurling itself about on the Ficcolo Marina…I suddenly began to get bored even at the pretty ones. There was just too doggone much meat around. It was like strolling through the freeze room of a wholesale butcher shop. I began to yawn.”

That’s when annoyance set in for the reporter. “It seems, as I sat there in this welter of near-nudity, that women owe a certain responsibility to the public. Some legal restrictions, perhaps, on how much a lady can display according to her personal qualifications to display them.” The journalist wasn’t the first one to think that, and many public beaches left the discretion to beach patrol cops—all of whom were men. The patrolmen of the Boston district metropolitan police, for instance, openly joked about their bias. “If she was properly proportioned, we’d probably let her alone,” they told United Press International in 1960. “But if she was the wrong shape, off she’d go.” But that didn’t stop women from being curious about the fragile dibs and dabs of cloth. In an article entitled, “My Wife Wear a Bikini In Public?…Never!” the Kingsport Times-News found that there were plenty of bikinis in changing rooms—just not in shopping bags. “Many women try them on in the shop, but they don’t buy them. They seem to like the adventure of trying them on,” a saleswoman told the newspaper in 1960.

It seems that if men approved of the bikini, women would feel free to wear them. “I think the bikini is terrible,” a shopper named Mrs. Ronnie Hixson told the paper. She paused, then continued, “My husband doesn’t like them.” In 1961, stores reported selling about two bikinis a year—and those they sold usually came back because of disapproving parents or husbands. But the curiosity was there, and the women who did buy the small suits wore them to sunbathe in the privacy of their backyards or building rooftops. In 1962, The Tennessean shined a light on that secret with an article entitled “Bikinis Lurk Behind Those Fences, Men!” The two-piece became an underground movement, where women got to tinker with the fashion away from the judgmental eyes of shop owners and pool going audiences. It took the United States more than a decade to warm up to the bikini, and even then, the swimsuit was still met with protests.

In 1963, Chicago had a “picket for swimsuit modesty” led by 44 Catholic teenage boys and girls. The group went to two Chicago beaches and challenged swimsuit wearers to “Dare to Be Decent,” and carried signs that read, “Don’t be a dummy, cover your tummy” and “No midriff chills, no doctor bills.” They were met with rounds of applause. If the bikini felt like a Molotov cocktail thrown at conservative, June Cleaver-like status quo of femininity at the time, that was the point. During the war, advertisers regularly linked women’s sexuality with mass destruction as a sales pitch: The beauty brand Monterey debuted a new red lip tone called “Atom Red;” the “Atom Bomb” perfume released by Andrew Jergens Company came packaged in a missile-shaped bottle; and, in 1952, one Las Vegas casino held a beauty pageant whose winner was crowned “Miss Atomic Blast.” In short, American culture had already constructed female sexuality as explosive, dangerous, and deadly if not contained.

To clinch the point, a picture of Rita Hayworth in Gilda was painted on the A-bomb that was dropped over Bikini Atoll. (The tagline of that movie was “Beautiful, Deadly…Using all a woman’s weapons.”) Was it any wonder that the bikini made people uneasy? In the end, even Réard, who egged on the world by stuffing his design into a palm-sized matchbox, thought the bikini had limits. In 1974, 28 years after a skywriter announced the world’s tiniest bikini in the sky, Réard was asked what he thought of the new string bikinis that were taking over resorts and beaches. “The string and nude styles will fail of themselves,” Réard said. “Girls attract men that way, but that’s traffic, not beauty. A woman is like a beautiful package, you want to untie the ribbon, take off the beautiful paper, open it and see what’s inside. A woman semi-nude has lost a lot of her attraction.”

The irony was lost on Réard. From women returning his own bikinis thanks to the objections of their husbands, to the designer now lamenting about the crimes of the g-string, it seemed there needed to be a man’s approval in order to enjoy fashion hassle-free. An A-bomb is sexy, but only if a woman isn’t in control of the launch buttons.

by Princess Gabbara
We cannot discount how enslaved Black women used dress as a form of resistance.
by Marlen Komar
View profile »