How “We Are Lady Parts” Chooses Joy Over Judgement | Bitch Media

Bring the Noise“We Are Lady Parts” Chooses Joy Over Judgement 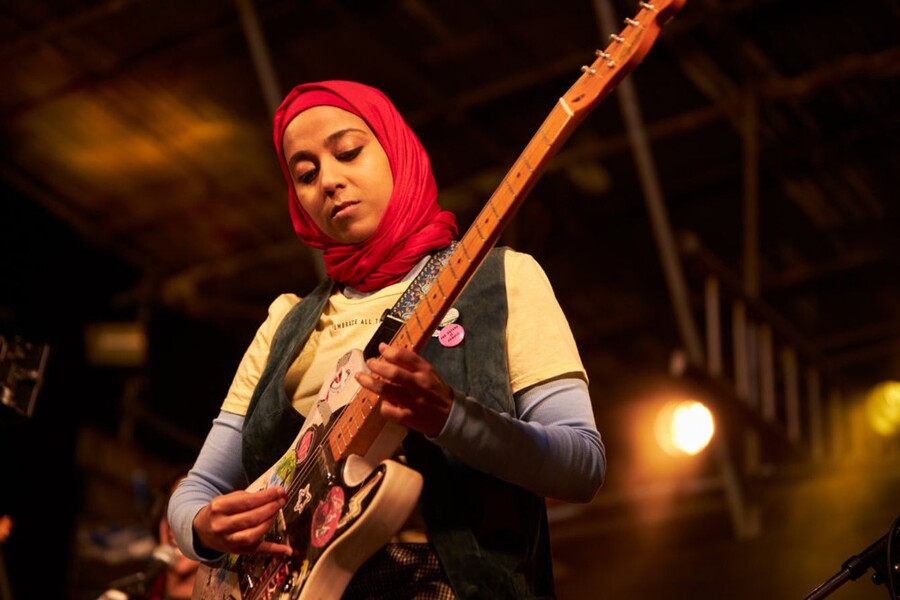 Anjana Vasan as Amina in We Are Lady Parts (Photo credit: Saima Khalid/Courtesy of Peacock)

Packed into a VW Golf, the members of the all-Muslim, all-women band Lady Parts drop their usual punk snarls for a group sing-along to The Proclaimers’ “I’m Gonna Be (500 Miles).” It starts off carelessly; guitarist Saira (Sarah Kameela Impey) isn’t even singing along at first. But the closer they get to the chorus, the closer they get to the exhilaration of pure joy, until they’re shouting the lyrics in one another’s faces. Here, on their way to unearth Amina (Anjana Vasan), the band’s soon-to-be lead guitarist, I felt a similar thrill. Watching a group of Muslim women in a self-contained space being joyously, unabashedly themselves—no trauma porn, no white saviors—is something I had simply never experienced before watching Nida Manzoor’s We Are Lady Parts.

Watching onscreen depictions of Muslim woman almost always means seeing societal stereotypes and assumptions reflected back at me through two different lenses. The first is the Orientalism, famously defined by literature professor Edward Said, by which the West “others” Eastern culture. The second is white feminism, which characterizes Muslim women as trapped by their faith. We’ve seen the results of this in portrayals of Muslim women who are “freed” by removing symbols of their faith (see Netflix’s Elite) or deployed in a terrorism plot twist (looking at you, BBC’s Bodyguard). The harm and consequence of viewing Muslim women through the Western orientalist gaze lies in its ability to reinforce stereotypes about them. We Are Lady Parts challenges this. Manzoor’s six-part British sitcom, now streaming on Peacock, centers Muslim women who not only embody intersectionality but embrace it. Its central character is Amina, a PhD student who’s looking for a husband and instead finds a halal butcher shop in which a punk band is holding auditions for a lead guitarist.

Her introduction to Saira, drummer Ayesha (Juliette Motamed), bass player Bisma (Faith Omole), and band manager Momtaz (Lucie Shorthouse) is ours as well, and through them Manzoor addresses the question of whether these women can ever be fulfilled while chasing their desires and having a rich relationship with their faith. How often have we seen a character like Bisma, for instance, a Black Muslim woman who is a wife, a mother, and the bassist in a punk band? How often have we been shown a married woman of any faith who devotes as much time to her art as she does her partner? Manzoor emphasizes this intersectionality in all of her characters: Amina can be a bright, ambitious woman in STEM and rip a monster guitar solo; Momtaz can be a hardworking, successful band manager and fully express her modesty through niqab. In scene after scene, Lady Parts reminds us that fulfillment looks different for everyone. The show achieves this nuanced view by finding its characters within their own communities, in contrast to narratives that place them in a sea of white castmates.

Manzoor flips the lone-Muslim stereotype on its head: If a Muslim character lives in the West, why wouldn’t they naturally gravitate toward the people who best understand them? While setting the show in the United Kingdom, Manzoor shows viewers that the reality of being a BIPOC person in a predominantly white society is that you’re not a token in your own life—you’re a token in the eyes of others. The chances of, for instance, Ayesha’s Uber customers being white or gig organizers being startled by Momtaz’s niqab are very high. The chances of the characters intentionally seeking out predominantly white spaces are slim to none. We Are Lady Parts isn’t Manzoor’s first foray into the world of television. Previously, she has written episodes for the CBBC’s Dixi and Jamillah and Aladdin; more recently, she’s directed episodes of the BBC’s Enterprice and Doctor Who. A comedy writer at heart, Manzoor wanted We Are Lady Parts to make room in the pop culture landscape for stories about Muslim women without the spectacle of suffering.

“I felt that Muslim women—Brown and Black women—have often been shown in quite a serious light, or just something quite solemn, especially with Muslim women and how they’re portrayed as oppressed and victims,” she told Digital Spy. “My experience, and my friends’ is that of joy and fun and silliness. I just really wanted to bring that into it.” It’s that joy sprinkled throughout that lets Muslims like me feel the magic of true representation. It’s watching the band jam out in the car or run around a field; it’s seeing Amina daydream herself into a black-and-white movie of her costarring her crush, Ahsan (Zaqi Ismail). These moments don’t make the threat of Islamophobia disappear. It still appears in both big and small ways: verbal harassment at an unexpected pub gig; online vitriol in response to a misconstrued profile of the band written by an opportunistic fellow Muslim woman. But Manzoor writes such scenes as challenges the band can overcome, rather than the challenges that become their identity. By making room for her characters to work through their marginalization, Manzoor lets them move through plot points without getting caught up in the details of why they’re Muslim.

Cutting out explanations also makes it easier for her characters to embrace their faith. Our cast members aren’t trying to rebel against their identities, but are instead surrounded by people who reflect it. Beyond Lady Parts, Amina’s university friends, family, and love interest are all Muslim; she even volunteers for a local mosque’s fundraising event. By contrast, we have Saira—seemingly kicked out of her home and mourning the loss of her sister—who lacks the supportive unit we see in Amina’s home life, or in Ayesha’s relationship with her brother. She doesn’t have many friends outside of the band and struggles to maintain a romantic relationship with her boyfriend, Abdullah (David Avery). But despite feeling like an outsider, Saira remains in community with her Muslim faith, greeting her elders with Salaam and turning to prayer during times of hardship. Pop culture tends to paint followers of a religion as a monolith, but Manzoor gives her characters depth via hobbies, emotions, interests, and problems beyond their faith.

As Amina anxiously moves through the tasks of halal courting, for instance, it’s instantly apparent that finding her a husband isn’t really a concern for her parents; her mother makes clear that there’s no rush, and that she has plenty of time to meet someone she really likes. While these reminders are frustrating for Amina herself, it’s important to note what Manzoor is nudging viewers to remember: Even when cut from the same cloth, born from the same blood, no two Muslims are the same. The family scenes often play as comic relief (the line “Who’s marrying a jihadi?” still cracks me up), but it’s wildly refreshing to see a depiction of encouraging Muslim parents who aren’t religiously uptight themselves but strive to support their child in whatever way she needs. But that doesn’t mean Amina doesn’t face pressure to conform. Noor (Aiysha Hart), Amina’s best friend and queen bee of their university friend group, personifies a “modern Muslim” stereotype in a show that many viewers have hailed as stereotype-free. Dressed in soft pastels and prone to squealing at the mention of marriage, their judgment propels Amina toward a double life.

She and the other women know how Noor will treat them if they don’t meet her expectations, and indeed, when Noor finds out about Lady Parts, she’s unsupportive and belittling. It’s the judgment of her friends, rather than her parents or her religion, that makes Amina believe she has to choose between her faith and the band, rather than being able to accept them both as huge parts of her life. But Noor also lives her truth. Each of her daily rituals and routines connect to her faith, from suggesting Muslim-friendly dating apps to Amina to making sure women and men are separated at her engagement party. Her intentions are good: She aims to live up to an ideal of Islamic perfection, and wants the same for her friends. She finds safety in sameness, and wants to be a good role model for her friends, to protect them from the harmful stereotypes that already plague the existence of Muslim women. The problem with Noor isn’t her faith but her judgment, and the strain in her relationship with Amina is upsetting to both women. What they seek from each other is understanding and forgiveness, something Manzoor weaves seamlessly into the plot.

By making room for her characters to work through their marginalization, Nida Manzoor lets them move through plot points without getting caught up in the details of why they’re Muslim.

And though it’s not something I noticed during my initial watch of We Are Lady Parts, the connection between forgiveness and Islam became striking during the second. Though not directly attached to their faith in any instance, nearly every character has a moment in which they must try to grant forgiveness to someone else. The scene that most stands out is one in which Momtaz gathers Bisma and Ayesha in a used-car lot so Saira can meet them on “neutral ground” and apologize to them after lashing out at them and effectively breaking up the band. This doesn’t make the show feel like an educational series on the values of Islam, but it does portray Muslim characters who practice differently from one another having a shared value that is inherent to not just their own faith but the concept of faith as a whole. Over and over, Amina compels herself to choose one thing over another—her friendship with Noor over the band, a hypothetical husband over her real passions, comfort over uncharted territory—but she never has to compromise her faith.

Giving in to judgment from Noor and vile insults from online trolls, Amina ends up leaving the band, minimizing herself in her friend group, giving up guitar—and making herself miserable. It’s when she realizes that none of these actions make her more or less Muslim that she understands that only way for her to be fulfilled is to be unapologetically herself. While there are no official plans for a second season of We Are Lady Parts, its success has been largely positive. The #weareladyparts tag on TikTok has more than 4 million views, and the top videos are filled with young Muslim women raving about being thrilled with the representation—which is exactly why these kinds of shows matter. Creative choices aside, you don’t have a show if you can’t serve your audience. But if we’re lucky enough to see a Season 2, I’d love to see Amina try to reconcile her love of playing music and her friendship with Noor, find out whether Saira manages to make it back into her mother’s heart, and see Amina and Ahsan’s storyline continue. Manzoor has effectively created an avenue to explore the nuances of faith and feminism; the conflicts she’s set up in Lady Parts—isolation, judgment, anxiety—are all very real parts of womanhood that aren’t always discussed in Muslim communities. But stories like these deserve to be told, and I hope this was just their first track on a very long, very punk album.