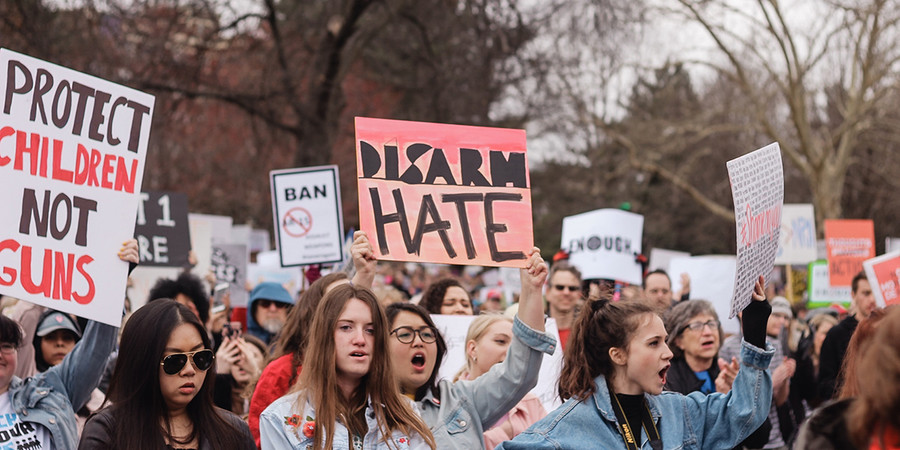 The March for Our Lives in Kansas City, Missouri (Photo credit: Annie Bolin)

This Tuesday when President Barack Obama announced a new nationwide plan for gun safety reform, he made sure to focus on a type of gun violence that’s are all-too-often overlooked: domestic violence. “Every single year, more than 30,000 Americans have their lives cut short by guns—30,000,” said the president. “Suicides. Domestic violence. Gang shootouts. Accidents. Hundreds of thousands of Americans have lost brothers and sisters, or buried their own children.”

America has a gun problem. We know this. You know this. The whole world knows this. America’s gun problem is so bad that we had roughly 300,000 gun deaths between 2005 and 2015, only a fraction of which were mass shootings.  While atrocities like the ones in Sandy Hook, San Bernadino, Colorado Springs, and so many other cities are what pump terror into American life, the daily domestic violence homicides that fill the police blotters in local papers often go largely ignored. A 2014 Center for American Progress report found that a key difference in the violence committed against women and men in the United States is who commits it: Women are much more likely to be victimized by people they know, while men are more likely to be victims of violent crime at the hands of strangers. Between 2001 and 2012, 6,410 women were murdered in the United States by an intimate partner using a gun—more than the total number of U.S. troops killed in action during the entirety of the Iraq and Afghanistan wars combined. This reports also notes that women owning guns for self-protection (the “good guy with a gun” argument) has not been shown to limit fatalities, and in fact, may increase their chances of being murdered. While mass shootings capture headlines, the daily deluge of domestic violence is seen as tragically “normal” in the United States.

Meanwhile, Republicans in Congress and the Senate have fought even the most basic gun safety reforms. During October, which is Domestic Violence Awareness Month, Representative Gabrielle Giffords launched the Women’s Coalition for Common Sense to support gun control laws across the United States that would specifically focus on stopping known domestic abusers from buying guns. Current federal law prohibits convicted domestic abusers from legally buying guns. However, as the Coalition explains, individuals who have been convicted of misdemeanor stalking are not prohibited from purchasing firearms; they can still pass a background check and buy a gun through the so-called “stalker gap.” On Tuesday morning, Giffords was at Obama’s side as he announced a federal plan to insure all gun buyers have to pass background checks and enforce existing gun control laws. “We’re working with advocates to protect victims of domestic abuse from gun violence, where too often, people are not getting the protection that they need,” Obama said, to applause.

To genuinely decrease rates of gun violence in America, we have to focus on decreasing domestic violence—and that means discussing why men have access to guns and can so often get away with abuse. Statistics have long shown that men commit homicide using guns in higher proportions; it is mostly men who are killing each other and everyone else. Which means that when we talk about gun violence, or gun control, we should be talking in the same breath about masculinity and the mold constructed for it to fit in. To ignore the price and role that men pay and play is to fail to dig out the roots that make gun violence a rote part of living in America.

Ending gun violence will require background checks and other policy solutions—but it also means changing our cultural attitude toward both guns and the way we as a society tolerate violence as an expression of masculinity. That guns have long being marketed towards men as extensions of masculinity is not incidental. When violence among young men is passed off as just “boys being boys” and aggressive, controlling behavior in intimate relationships is seen as romantic, we create an environment that fosters violence. The bullying of boys who get emotional doesn’t stop on the elementary school playground—conservative pundits pilloried Obama for shedding tears during his discussion this week of the Sandy Hook shootings. Meanwhile, easy access to guns has created pathways for fatal gendered violence. Because intimate partner violence often occurs in the home, it’s harder to see. Lack of support legally, socially, and culturally for survivors makes it harder for victims to flee—trapping many in situations that escalate into fatal shootings. While the main argument for gun control has to do with relatively rare but tragic displays of mass violence, stricter gun controls would also serve to keep thousands of women safe and alive on a daily basis.

Existing federal legislation, the 1996 Domestic Violence Offender Gun Ban, has been deeply flawed since its inception. For one, while it bans offenders accused or convicted of domestic violence from purchasing guns in the future, it does nothing to address the guns they already own. Not to mention the many loopholes through which anyone can evade background checks and buy a gun. There is also the very narrow definition of domestic violence that requires victims to either have had a marital or dwelling history with their abuser. What about dating partners? Stalkers? More and more women are enduring violence at the hands of dating partners than husbands or domestic partners—a trend which makes sense if you consider the decrease in the popularity of marriage over the past few decades.

Obama’s new Common-Sense Gun Safety Reform plan addresses some of these issues by requiring background checks for all gun purchases and making sure current laws are enforced. But there is so much more to be done. Federal law could more fully address gendered gun violence, for example, by requiring domestic violence abusers to relinquish any guns they own and expanding gun bans to restraining and trespassing orders. It could close the “stalker gap.” It could provide dramatically more funding for domestic violence shelters and services. There are many more lives we could be saving if we understood implicitly that gun control is about more than preventing mass shootings or persons deemed mentally ill from acquiring guns. Smarter gun control is about tackling the reasons behind gun violence—and understanding how the epidemic of violence functions to disproportionately affect women and people of color. It is about bearing witness to the violence that happens out of the public eye and giving these victims their due recognition and justice.

Children and women are main victims of gun violence, especially the idiotic girlfriend exemption rule that these lawmakers made. Its basically a loophole that allows men to shoot their GF's or wives.