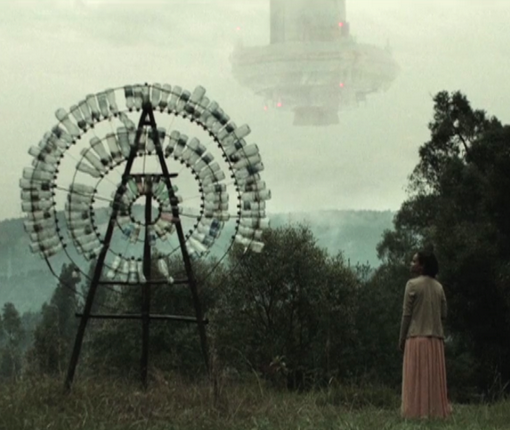 For my last post as Bitch Media’s 2017 writing fellow in Pop Culture Criticism, I think it’s only fitting to evoke the powerfully Afrofuturist, pop culture rich, and all-around moving film Crumbs. The 2015 film, starring breakout Ethiopian actors Daniel Tadesse and Selam Tesfaye, was touted as Ethiopia’s first postapocalyptic sci-fi film. It got sadly minimal traction in popular culture; the handful of reviews circulating online describe the film as tentatively charming at best—the New York Times called it a whimsical “shaggy-dog story”—but don’t do its awe-striking effects any kind of justice. Though one of the chief criticisms of the film is its lack of a linear narrative, that’s in fact one of the defining features of Afrofuturist creations—and, perhaps more important, what really separates the genre from other mainstream sci-fi narratives that reproduce colonialism in their visions of “the future.”

Indeed, the film’s striking apocalyptic scenery, the concepts of Black temporalities at play, and the simple presence of Black people in an imagined future to begin with all affirm Afrofuturist productions like Crumbs as work that needs to be cultivated in opposition to the Western, white-focused sci-fi status quo. Crumbs follows the epic, surreal journey of Candy (Tadesse) who prays to Michael Jordan figurines, battles Nazis, and finds Santa Claus at the end of the world. Okay, it’s a bit more complicated than that: As a survivor of a devastating world war, Candy lives in a ruined bowling alley and sets off across a the wasted Ethiopian landscape in hopes of boarding the mysterious rusted spacecraft that hangs in the sky above. His love, Sayat (Tesfaye), whom he calls Birdy, is a fully developed character (as we well know, often a rarity in mainstream sci-fi films); though Crumbs is a dystopian love story, the romance arc doesn’t define Birdy. She remains her curiousity and fierceness as her own exploration of self plays out in a world where, as in our own, her survival isn’t guaranteed.

In the wasteland of Crumbs, contemporary pop culture icons become distant relics, closer to mystical deities than beloved scraps of nostalgia. It’s a world where Ninja Turtle action figures and Michael Jackson records (Dangerous, to be specific) become currency as characters in the dystopia return to bartering as a system of exchange. The importance of these relics isn’t just aesthetic wit on director Miguel Llanso’s part—it’s another reminder that humans are a part of the historical process and our bodies exist as landmarks within a fluid timeline. The detritus of our civilizations will someday be the only remnants of our collective existence, and what will they have to say about us? Will they impart that our struggles dialectically came closer and closer to chaos, but collided with freedom throughout it all?

Crumbs no doubt draws upon other Afrofuturist dystopian films. The 2009 Kenyan sci-fi short Pumzi, for instance, renders a world that is failing, but is still one in wherein black women are central to the continuance of life. Pumzi was lauded as Kenya’s “first” sci-fi film, but I want to be mindful  of labeling any these productions as the first simply because Afrofuturism respects the dreams and imaginations of our ancestors who were able to lead lives that we couldn’t imagine. Pumzi, like Crumbs, derives much of its powerful aesthetic from breathtaking stills of the environment, underscoring the importance of environmentalism and care for the Earth while also giving Black characters the mobility and connection to the planet that is often denied to them via histories of colonialism.

Films like these aren’t just about indicting of the human greed and exploitation that threatens the planet and its inhabitants. By honoring Black life and Black being in all imaginings of our futures, they also present us with a blueprint for worlds in which where Blackness is honored, period.. The freedom and mobility imagined as part of dystopian pop culture’s vast landscapes—especially for marginalized, non-Western bodies like Candy’s and Birdy’s—stands in opposition to the anti-Black fantasies and stories we’ve become acclimated to, the ones that want to immortalize Black suffering rather than celebrating Black life.

What would it look like to have a beautiful, Black, loving world where the future was undeniably free? And here I’m not referring to “the future” as an ever-distant-never-really-here fantastical setting, but as a metaphysical force that we can carry with us in the present as an acknowledgment that time has never been linear. Our past makes us who we are, and we are historical figures who are actively forming futures for ourselves and others. We need to go beyond anything we’ve ever imagined before and think hard about what we want to see in narratives that construct the beginning of new worlds after this one has ended.

Relevant: Ytasha Womack on Afrofuturism and the World of Black Sci-Fi and Fantasy 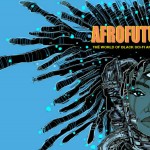 by Alison Pezanoski-Browne
Afrofuturism is where the past and future meet.